A brand built to scale and built for the off-premises movement.

A lot has changed in the restaurant industry since California Pizza Kitchen founder Rick Rosenfield first entered the space in 1985, and even since he sold the classic brand in 2011. Consumers increasingly prioritize convenience and portability of food, and it’s with this understanding Rosenfield brought a novel, reinvented concept called ROCA to Los Angeles this summer.

“We were ready to launch this prior to the pandemic and then the pandemic really proved in our mind, wow, the convenience of this and the ability to travel,” Rosenfield says of ROCA’s pizza products.

ROCA stands for the Roman origin of its food (“RO”) and its California-inspired ethos (“CA”). It offers what the company calls an elevated take on Roman-style by-the-cut pizza. Its first location debuted in Glendale, California, and the brand plans to unveil new units in Pacific Palisades and Westside later this year.

ROCA builds upon the expertise Rosenfield acquired while forging CPK. When Rosenfield started the restaurant with Larry Flax, the two were former prosecutors hoping to find a way to get out of the law practice. In 1985, the duo discovered their answer in the creation of California Pizza Kitchen, a chain that has grown to more than 250 locations around the world and launched a frozen food empire.

Shopping complex real estate developer Steve Rich became CPK’s Senior Vice President of Development after being introduced to Rosenfield and bonding over their Midwestern roots (Rosenfield grew up in Chicago and Rich in Detroit). Rich was key in location strategy and logistics for CPK, which became synonymous with upscale mall and shopping dining across America.

Rosenfield and Rich reconnected after the sale of CPK in 2013 and began brainstorming new concepts that could disrupt the suddenly bursting industry. The first was Los Angeles-based high-end seafood restaurant Bottlefish, which targeted the dearth of luxury seafood oriented restaurants.

Meanwhile, the pizza concept that would become ROCA headed to the back burner. Bottlefish eventually became a victim of the pandemic, closing permanently due to what Rosenfield attributes to its full-service dining nature, a menu that was unfavorable to takeout and delivery, and failure to reach a satisfactory resolution with its landlord.

For Rosenfield, going back into pizza originally indicated returning to full service, or creating a version of what CPK would be today, with wood burning ovens and sustainable sourcing.

But as customer behavior shifted toward takeout, third-party delivery, and convenience, a pizza style Rosenfield tried during a trip to Italy with his wife, Esther, just after selling CPK continued to show its potential. The Roman style pizza, al taglio or “by the cut,” is sold based on the size and weight of the slice. Beyond that, Rosenfield was impressed by how well-positioned Roman pizza could be as a product, seemingly designed to take home or deliver. 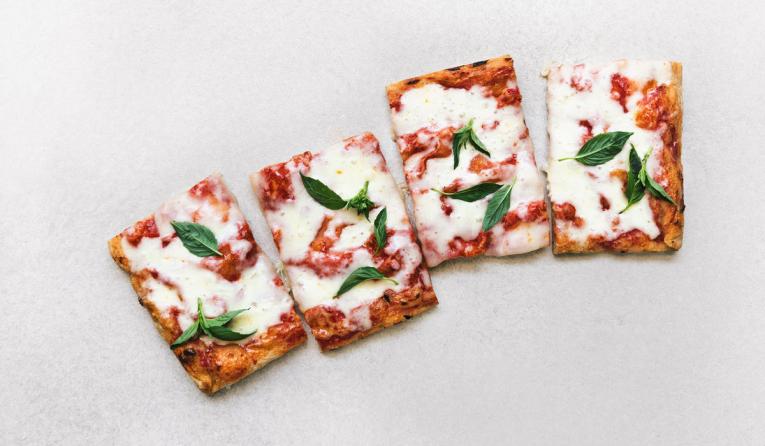 ROCA's dough is fermented in a refrigerator for several days, allowing it to be crispy yet airy and reheat-friendly.

“All of a sudden pre-pandemic, the full-service idea went away,” Rosenfield says. “We were focusing on this fast-casual concept that became ROCA because it would give me the opportunity to take this canvas and now put toppings on it. That was exactly what we were looking for in terms of sourcing, and it just seemed to come together.”

The opening of ROCA comes at a unique time, when convenience and ghost kitchens dominate emerging trends. If ROCA had opened much sooner, the restaurant likely would have been situated in a work office-heavy area, which of course would have been a challenging location to drive business in the wake of COVID-19. When the pandemic hit, the ROCA team set its sights on opening locations instead in lifestyle centers, where third-party delivery services like Uber Eats, DoorDash, and Grubhub could easily access them.

A restaurant like ROCA fulfills customer demands for convenience, which Rosenfield believes will be permanent, pandemic or not. It also avoids the pitfalls that can sink full-service restaurants, like the heightened impacts of dine-in restrictions or a labor shortage. While California Pizza Kitchen was a labor-intensive business as a sit-down restaurant that depended on the hospitality of servers, ROCA’s model is entirely different.

As a kitchen-oriented restaurant with a flexible labor volume, ROCA will be able to avoid situations that occur in other high-density locations where the restaurants are half full, not because of lack of demand, but because of limited staff. ROCA also benefits from the established and well-known positive culture found at CPK.

But perhaps the strongest asset to ROCA is the special pizza offering itself, with a type of dough that plays right into what customers are seeking today.

“It is the most unbelievable pizza that is reheated at home and it travels so well,” Rich says. “But even when it's reheated, it comes right back up to what I would call in-restaurant quality inside of people's homes in a matter of minutes.”

When people ask why he is going back into the pizza business, Rosenfield answers that ROCA offers a “superior product” from its portability and consistency in quality, whether at the restaurant or home. The dough is fermented in a refrigerator for several days, allowing it to be crispy yet airy and reheat-friendly.

When Rosenfield sold CPK in 2011, he says independent research showed the chain’s customers had the highest income and education levels of customers at any chain in America. That didn’t happen by accident, Rosenfield says. It was a purposeful strategy to go after these guests, and it’s the same strategy being employed today with ROCA.

“We set out to create a premium brand in premium neighborhoods throughout the U.S,” Rosenfield says. “That's our DNA. It's my DNA. It's Steve's DNA. And that's exactly our plan for ROCA.”

The scale looks different, though: whereas CPK locations took up 5,000 square feet, ROCA’s fast-casual units are 1,000–2,000 square feet. While they will still be in what Rosenfield calls “the best neighborhoods in America,” once the brand is established, it can begin looking at ghost kitchen growth.

“Now as it comes to our style of pizza, when you know the brand today, you want that product,” Rosenfield says. “And the customer I believe is not concerned about where it's cooked, where it's made. So we'll be able to operate ROCA pizza from ghost kitchens as we get the brand known.”

While COVID-19 has taken its toll on the industry, Rich thinks there will always be opportunity in upscale areas with prime real estate. In its growth, ROCA will largely spread from Los Angeles outward but remain opportunistic if developers approach ROCA about the right site or market.

Despite some challenges, California is still a great state to do business, Rich says. The demand is there and tourism is picking up post-pandemic in a place that was pre-COVID becoming a hotbed for food and culture, he adds.

“I don’t think there was a better time up until February 2020 or a better place to be for the food scene than Los Angeles,” Rich says. “It’s amazing, and it’s starting to come back.”