The sandwich chain, now 2,000 units and counting, keeps giving back and moving forward.

Web Exclusives | September 28, 2021 | Danny Klein
Jersey Mike's
Jersey Mike's has been one of the country's fastest-growing brands in recent years.

Jersey Mike’s CEO Peter Cancro couldn’t sleep. Since buying a Point Pleasant, New Jersey, sandwich shop in 1975, with a $125,000 loan backed by his football coach, Cancro had played front man plenty of times. But he had never tried this. And not everyone agreed he should.

Cancro got up in the middle of the night and wrote two commercials. He ended up directing and starring in them, too, which he hadn't attempted in nearly 50 years of ownership. Jersey Mike’s bought airtime during news slots, instead of the sports blocks it typically fills—that world had come to a halt as well. Cancro didn’t plead for people to buy subs or even explain how the brand’s 2,000-unit fleet was open for business. Instead, he spoke about giving back: how Jersey Mike’s was getting involved, and asked others to consider joining “in the true spirit of Jersey Mike’s.”

This was March 26. By the time 2020 closed, only two of the top-eight grossing sandwich chains in America had managed to grow. One was Arby’s, which expanded by a net of 10 restaurants. The other was Jersey Mike’s, and it tacked on 189 stores. In fact, only Starbucks (287) and Domino’s (229) spread by more locations last year than Jersey Mike’s.

Why Jersey Mike's is one of QSR's 17 Best Franchise Deals

The brand went on “attack mode,” Cancro says. There are roughly 1,200 stores in development today, 250 are expected to open in 2021, and Jersey Mike’s believes a yearly pace of 300 stores is well within reach, with a 3,000-unit, three-year goal on deck. Over the next 24 months alone, Jersey Mike’s projects 600 new restaurants. It’s been mounting as Jersey Mike’s added 173 and 150 units, respectively, in the years leading up to 2020.

So what drove such an outlier result in COVID conditions? More so, what’s powering arguably the hottest restaurant franchise in America?

It’s a combination of unshakeables, Cancro says. The first of which he tried to get across in the TV spot. Ask an expert where to invest ad dollars in today’s noisy media market and they’ll preach “cause-related marketing.” Jersey Mike’s, Cancro says, has been living this day in and day out for more than four decades, without even realizing it.

When Cancro was in high school, he watched two Point Pleasant businessmen, Bob Hoffman of Hoffman’s Ice Cream, and Jack Baker of the Lobster Shanty, give back to local causes. He was the recipient of one such program and paid it forward as a business owner. “That’s the message that I’m trying to bring throughout the country and I think people really get it,” Cancro says.

In August, Jersey Mike’s teamed with the USTA Foundation and donated 20 percent of sales. It raised more than $2 million for the “Rally for the Future” campaign, which supports National Junior Tennis and Learning chapters in over 250 diverse communities.

For the company’s annual “Day of Giving” in 2019, where it collects a full day’s business for local charities, Jersey Mike’s raised $7.3 million. The program took a year off during COVID’s spike. But in 2021, Cancro figured $8 million, maybe $9 million might be doable as mobility rebounded. Jersey Mike’s ended up raising over $16 million. “People always say, hey we hear what you’re doing for the kids, the programs, and oh yeah, your subs are good. That’s always secondary. And we love that,” Cancro says. 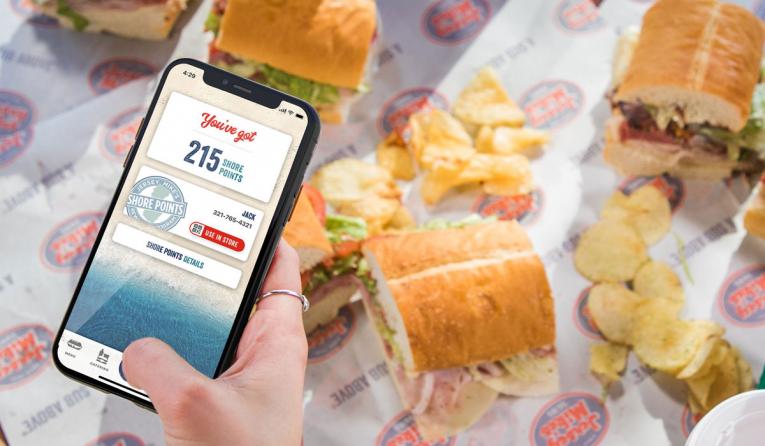 He also continued to star in commercials, including one with his youth football coach that Cancro says he shot from the hip.

Jersey Mike’s culture is as old as Cancro’s tenure. He turned 18 a few months after acquiring Mike’s Subs (its original name) and hosted a local Special Olympics event for kids from a neighboring town. That will come full circle in 2022 when the national event rolls into Orlando, Florida. Cancro will be on the mic to introduce the Games on national TV.

“Right away, we got involved in local high schools and churches and kid’s programs and just never stopped. Been doing it ever since,” he says.

Cancro whole-heartedly believes this plays a role in Jersey Mike’s ability to resonate in markets as it scales. “We open up in these little, out-of-the way towns and it’s a cult-like following, and we just start blowing up,” he says. “You put a little road sign on and they’re hitting big volume right away.”

It was 30 years ago when somebody first told Cancro to work on his brand. And it’s gotten to the point where success is feeding itself, he says. Operators understand the charitable angle and commitment to quality. Guests expect it.

However, Jersey Mike’s recent surge and why it’s ready to sustain high-level growth, didn’t materialize entirely on good vibes. The company spent close to $185 million on IT and infrastructure—an effort Cancro says was about going all-out and not stopping. Just Jersey Mike’s app was a $20 million-plus investment. That fortuitously finished in the summer of 2019 and positioned the brand for many of its pandemic pivots, like takeout at the door and curbside pickup.

“Starbucks and Domino’s like to call themselves IT companies,” Cancro says. “But so are we.”

Jersey Mike’s stores have all been on the same point of sale since 2004. Yet arguably the most notable feat of late was Jersey Mike’s retrofit. It finished 1,700 locations within a year and a half. Brand-new floors, seating, counter tops, tiles, and the whole front of each restaurant area.

Jersey Mike’s had last retrofitted units in a 2009–2011 stretch. While the brand paid for the majority of that push as well, the bill totaled only $15 million.

Leading up to the recent effort, Cancro conducted a 25-city tour and met an average of 250 people per stop. Owners, managers, assistant managers, and even crew members showed up. First, he informed people of the $75,000 price tag and why it was important to spend money to make money. Then he spoke about changes—the tables, chairs, backline tile, wall graphics, and how Jersey Mike’s was going to emerge a more contemporary, yet recognizable version of itself. He saved the kicker—the fact the company was paying for it—for last.

Cancro says operators popped up and cheered. They hugged. The best part, he adds, was every city, for one reason or the other, didn’t tell the next. So Cancro kept stunning crowds.

If Jersey Mike’s attempts a retrofit again down the line, it’s likely going to include far more stops.

Today, there are a “few” franchisees with more than 50 locations. Some are in the 30s and 40s. But the vast majority have about 15–20. And roughly 83 percent of the chain’s growth currently is coming from within a base of 550 operators, where the average franchisee runs four stores.

That plus Jersey Mike’s rising AUVs is why the pipeline has stuffed beyond 1,000 locations, Cancro says. 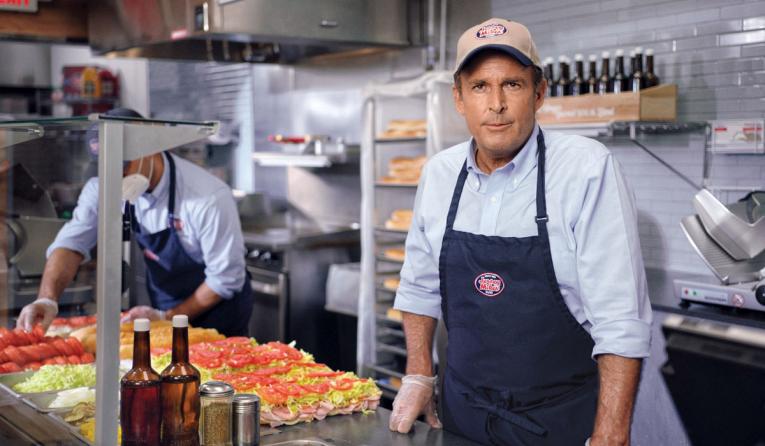 Despite the size, and maybe due to Cancro’s steady involvement, Jersey Mike’s remains heavily involved in deals. Average units cost about $385,000–$400,000 to get up in the 1,000–1,400 square-foot range. “We’re not just selling and growing without any idea what’s happening,” he says. “We’re 100 percent involved. Every single lease that’s signed, we see the location, and we know what it’s going to cost before we sign the lease. The grease trap, the HVAC, everything.”

One reason Jersey Mike’s stacked momentum in 2020 was its suburban focus. The chain has never targeted urban metros, office buildings, or universities for growth. That isn’t likely to change.

Another element at work is more unique. Cancro says he never “thought for a second” about buying a sub shop when he was 17. It was his mom’s idea. He laughed it off until he got upstairs and the light bulb blinked on. Thankfully, his football coach was also a local banker.

One of Cancro’s mentors is Tom Monaghan, who co-founded Domino’s along with his brother, Jim, in 1960 (it was called DomiNick's at the time).

Back in 1984, Monaghan led a program where the brand opened 1,000 stores in a year—all from people within the company. They had to manage and run a store for over a year. The end result, Cancro says, was certified, strong operators.

It inspired Cancro to create the “Coach Rod Smith Ownership Program”—named after the youth football coach mentioned throughout—that encourages the same kind of leap Cancro took as a teenager. Jersey Mike’s puts up the money, signs the lease, and places aspiring entrepreneurs in business for five years. The company handles the books, and owners that sponsor upstarts get 3 percent—or half the royalties—for three years. For an average location, it works out to about $100,000.

Holley Hood and Haydyn Straus, a couple Cancro met at a Jersey Mike’s meeting, got the program underway. “Probably within the next year to two, we’ll see 100 a year opening that way,” Cancro says. “And then it will just grow because the word will be out that it is possible.”

The topic brings Cancro to the country’s current labor crisis. It’s not weighing on Jersey Mike’s as heavily as some, he says, because the company boasts light rosters. It takes 10–12 people to run a store, including the manager and assistant manager. In the summer, it might be 15. In the winter, perhaps eight to 10.

Cancro says Jersey Mike’s tried to keep staff engaged over the years by hearing them out and not overloading shifts. “We’ve always won on the labor. The assembly line. The slicer. Sprinkler. Wrapper. You see it when you go into the store,” Cancro says. “It’s the assembly-line process and it works. And the labor is probably a good 7–8 points lower than the [rest of] the industry.”

There’s no alcohol or deep fryers. Managers have off on Sundays and work half-day Saturdays (the assistant GM works Sunday).

But that’s not to say Jersey Mike’s hasn’t adjusted with the times. Previously, the average take for managers was somewhere in the $75,000–$80,000 range. It’s now over $100,000 at corporate units, with a good chunk of franchisees following suit and raising compensation.

Also, and this stems from Cancro’s past as well, all the way to 1971 when he was 14, Jersey Mike’s has a tip jar and collects gratuities for online orders. He says stores today earn about $4 an hour in tips per worker. So Jersey Mike’s hourly crew members, in some spots, are earning $19 per hour.

“We care about the charities being served. The communities being served. Managers making good money,” Cancro says. “All of the infrastructure. I’m an old football player. The blocking and tackling. Fundamentals. Moving the chains. Ten-yard gains. Sure, we’re getting bigger gains now, but boy, I’ll tell you, it’s taken a lot of years to really get to where we are and now, we’re starting to grow. Just really starting to grow.”