Akash Kapoor, co-founder of Curry Up Now, wants his restaurant to be the “biggest and baddest” Indian food brand in the U.S.

Born as a food truck in California about a decade ago, Curry Up Now is in the throes of expanding its reach and seeping into the mainstream, with eyes set on raising its game to the levels of ethnic counterparts Chinese and Japanese food and even pizza, tacos, and hamburgers.

The chain ended 2019 with eight units—six corporate stores and two franchises. The company began 2020 with openings in Sacramento, California, and Hoboken, New Jersey. In addition to a handful of corporate stores around the Bay Area, more franchises are on the way in Salt Lake City; Newark, New Jersey; Atlanta; San Diego; and Indianapolis. The brand should have a little more than 20 units by the end of the year. Another 20 to 25 spots are in the works for 2021 as well.

But as Kapoor notes, “Obviously all this costs a lot of money. That’s how we’re growing. It’s a cash-intensive business.”

In May 2017, the brand partnered with Fransmart, a franchise development company. It took a few years to set up the systems, processes, and educational material. It was an expensive endeavor and a financial load, Kapoor says, especially without income.

To aid in Curry Up Now’s growth, the brand recently sealed an undisclosed investment from Liquid 2 Ventures, a California-based venture capitalist firm led by Hall-of-Fame quarterback Joe Montana, Mike Miller, a Ph.D. physicist, and Michael Ma, a Harvard graduate. The firm describes itself as “a seed stage venture capital firm built for the post-cloud, post-mobile, post-accelerator world of technology startups.”

Montana said he was excited about the opportunity to invest in a category-defining brand. Curry Up Now is the first restaurant in Liquid 2 Venture’s portfolio. The investment will support the growth and expansion of both corporate and franchised locations. 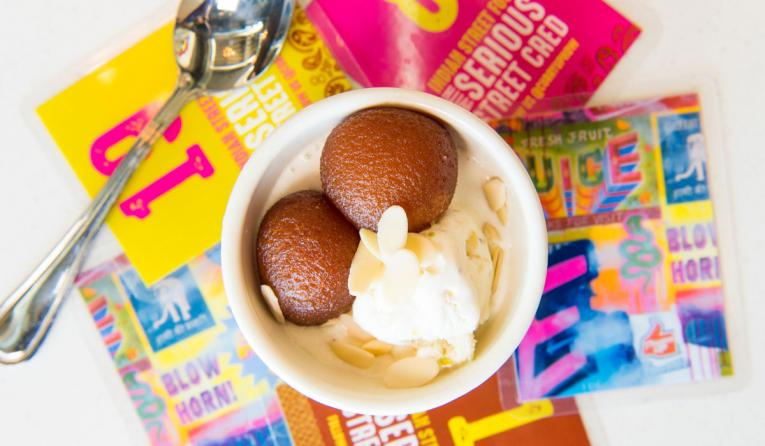 Curry Up Now was formed with the idea of serving Indian food differently.

The legendary football player turned serial angel investor added that Curry Up Now does a good job of knowing what its brand stands for; as a fund, they want to build on the awareness.

“We were impressed by how much Curry Up Now's founders focused on their quality food,” Montana said in an email to QSR. “For our startup investments we focus on companies with great product and similarly we saw how the Curry Up Now team was taking a similar approach to their core product—their food.”

Kapoor says Curry Up Now was formed with the idea of serving Indian food differently—moving beyond the typical naan and kabob type of experience people were used to eating. The menu includes burritos, quesadillas, tacos, sexy fries (Indian-inspired poutine), naughty naan (similar to pizza), and of course, Indian street food.

“The idea was to make everything easy to order, easy to understand,” Kapoor says. “I tell people, we didn’t want to get into the education business on what Indian food is, but present very authentic food in a somewhat different format. … At its core, the food is very authentic. Half the menu is authentic at its core and in taste and in the format, but the other half is where we have fun with the burritos and tacos and quesadillas and naughty naans and sexy fries and things like that.”

The chain’s co-founder believes Indian food hasn’t taken off in the U.S. because it hasn’t done well commercially at scale, and hasn’t quite evolved. He draws a comparison to Mediterranean food, which he says is complex, but has been simplified by brands such as Roti Modern Mediterranean, Zoës Kitchen, Cava, and Garbanzo Mediterranean Fresh. Curry Up Now tries to emulate that simplification through ease of ordering and high-quality guest service.

“On the surface it seems like a small part of their operations, but having great employees is so important to restaurants such as Curry Up Now,” NFL legend Joe Montana says. “By hiring and retaining the best talent, it flows to all parts of their business from service, food quality, etc.” 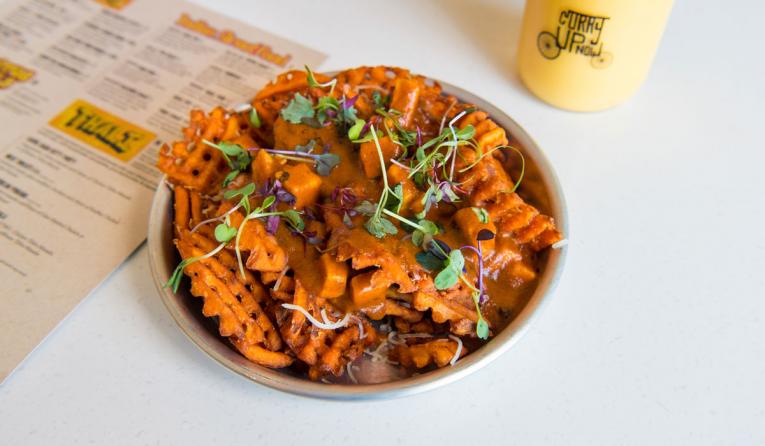 As a company that “uses cutting-edge software to bring startup-style growth to the [quick-service restaurant] world,” Montana said Liquid 2 Venture’s interest was also piqued by Curry Up Now’s use of technology. He noted the brand’s partnership with Workstream, an automated hiring platform.

“On the surface it seems like a small part of their operations, but having great employees is so important to restaurants such as Curry Up Now,” said Montana, a four-time Super Bowl champion. “By hiring and retaining the best talent, it flows to all parts of their business from service, food quality, etc.”

The Indian food brand is also leveraging technology to improve its off-premises business. Kapoor says his team is working with Olo, a mobile and online food platform, to align its menu with third party-delivery companies so no one is manually entering orders. In addition, the brand is using one of Olo’s “Dispatch” feature. As part of the service, orders start on Curry Up Now’s app instead of being originated by the third party. The process allows the chain to monitor guest data, and it’s more economical, Kapoor says.

The company is working with Thanx, a digital engagement platform, to create a loyalty program, and Compeat, a restaurant management software, to keep track of inventory, recipes, costs of goods sold, and other accounting matters.

“Just getting more efficient and using all the toys the big boys use,” Kapoor says.

Kapoor says that when the first food truck opened in 2009, there were no plans of opening a restaurant, let alone expanding nationwide. It was more of a “let’s mess around and see what happens approach.”

Eleven years later and now on the heels of a venture capitalist investment, the Curry Up Now team has done quite the opposite.

“Obviously opening 15 locations in one year for a company of our size is a big undertaking, but we feel confident,” Kapoor says. “… The business has just evolved. Very exciting times for us.”

The Role of Private Equity in a Post-COVID Landscape
There’s Always Room for Another Great Restaurant
Restaurants in 2021: Technology and Hospitality Search for Balance

How COVID-19 Forever Changed the Restaurant Industry
A Casual Chain Embraces the Pandemic’s Service Shakeup
Restaurants in 2021: Takeout and Delivery is Now Essential to Customers

7 Years After Shark Tank, Cinnaholic Set for Rapid Growth
Jack in the Box Gears Up for Major Growth Phase
How Virtual Brands Saved This Fast Casual in 2020