A key selling point for Così has always been its bread

After battling with bankruptcy, restructuring, and emerging as a private company, Così is making new strides into expanding its brand. It is doing so through a streamlined approach, the 30-year-old company says, favoring smaller but more efficient units and growing its digital business. The brand is also broadening the catering side of its operations to provide greater accessibility.

Così, which filed for chapter 11 bankruptcy protection in September 2016, listing $31.2 million in assets and $19.8 million in debts, opened up four new units this year—Burlington and Cambridge, Massachusetts, Hartford, Connecticut, and most recently, Mountainside, New Jersey—bringing its unit count to 49. When Così declared three years ago, it had closed 29 of its then-74 company stores and cut 450 jobs. The company’s remaining 31 franchised stores stayed open. Così peaked at 151 locations in 2008.

As for what led to the fast casual’s troubles, the company said it didn’t respond to “macro” trends or its own debt crisis. CEO Robert Dourney was let go the previous August and Così’s board said he didn’t recognize the severity of Così’s financial troubles, according to filings. It continued a revolving door at the top as well, with five leaders helming Così since 2011.

And now Così is rethinking expansion and what that looks like for today's customer. It signed a lease in Piscataway, New Jersey, for an unit arriving in the first quarter of 2020, and it also opened up two commissaries for food production, one in Charlestown, Massachusetts, the other in New York City, mostly for fulfillment of catering. Additionally, Così is looking for a third commissary in Washington, D.C, and future locations focusing on off-premises execution will emerge in New York City and Boston.

“That's really the future,” says Vinnie DiNatale, Così’s director of marketing. “With the different costs and where our sales are growing, that's where we see a lot of traction. We're examining a couple of locations in different geography.”

Speaking of geography, Così has seven franchised locations down in Costa Rica. A few years ago, someone from that country came to the U.S., enjoyed the Così experience, and worked with a previous management team to bring the brand down there. “It is a pretty strong presence today,” DiNatale says.

The Così brand actually began as a bistro in Paris founded by Drew Harre. A restaurant there bearing the name—which still exists but is no longer financially associated with the American side—was visited by the company's North American founders Shep and Jay Wainwright, who loved it and wanted to bring it back to the U.S. “Like many brands, when it started there was tons of interests, and it just started growing very fast,” DiNatale says. “But dynamics change, and fast growth can be a challenge over the years.” 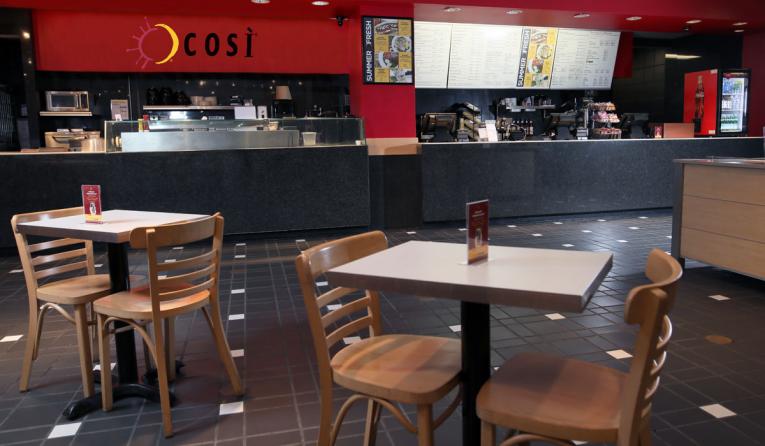 With more people running their lives online, Così has recognized the importance of DoorDash and other third-party delivery companies. “People are living on their phones, and that's why we're putting a lot into digital advertising and finding those people when they're looking and when they're ready to order,” DiNatale says. “Our app that we launched this year integrates with our loyalty program. You can order online, redeem rewards, and add points all through the app. Door Dash is in the app as well, so if you want delivery, simply click on the Door Dash icon. That’s working really well for us. We're trying to stay in front of those guests when they're either ready to order or thinking about ordering, and just making it as easy as possible.”

Così has a big push for digital adds slated for the end of 2019 and into 2020. It will also work on more traditional avenues like direct mail and billboards. “But there's so much ability to track [online] and see what does well and how quickly you can change,” DiNatale says. “For instance, we noticed that a lot of people that come to our site and visit our stores are iOS users. So, we use that as one of the key pieces to target our guests—let's put more into iOS users.”

Menu wise, Cosi plans to bring back its turkey stuffing melt in October, which has been a popular fall sandwich. “It's something that comes around seasonally, and we're always looking to improve our current menu and hear from guests,” DiNatale says. “We're bringing in a new rotisserie chicken for our salads and sandwiches in the DC, Maryland, and Virginia market to test it out. We're really excited. We did some focus groups and people are really enjoying that. So that's one of the improvements that we see making.”

Così is also going back “to some of our classic products of food quality,” he continues. A key selling point is its bread. “People talk about Così’s bread and how good it is. That's such a key part. It looks different, feels different, and tastes different than getting sandwiches at other places. That's really what people connect to. The TBM [tomato basil mozzarella] sandwich is our best seller. It's simple, but it's classic and delicious.”

As the company opens new units, it is focusing on smaller locations and doing more off-premises business. Così’s catering business now totals more than 25 percent of its sales, and the largest catering order it handled this year was 1,000 people in the D.C. region. 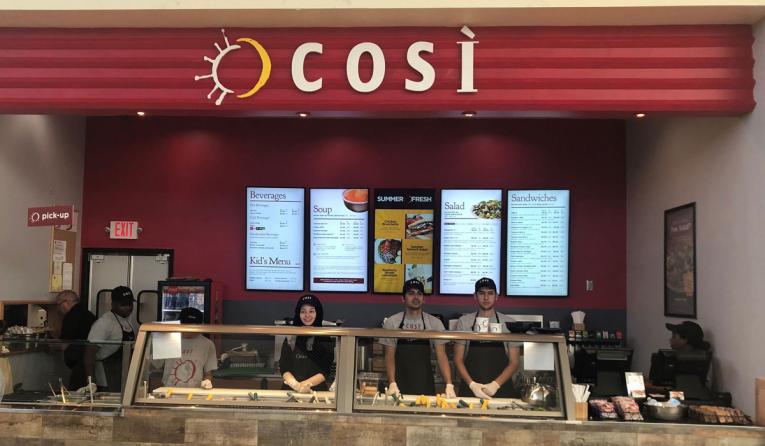 Così hired many classically trained chefs to run some of the catering.

“That doesn't include people who do online orders or takeout orders,” DiNatale adds. “That's approaching half of our customers who don't sit in our stores anymore. We've opened up in office buildings, including two of those new locations. They're great for catering meetings because they're in office dense areas. It's a much different dynamic than some of the past Cosìs—lighter footprints, but still giving that same kind of great Così experience. We're seeing that really resonate well.”

DiNatale says the company hired many classically trained chefs to run some of the catering, “to really focus on the Così customer and who that customer is,” he says. “Getting them that Così experience wherever they're at and wherever they want Così to be. The commissaries have classically trained culinary chefs, so the food quality and execution is all overseen by them in the same area. Some of these markets are doing $15,000–$20,000 catering days. They're seeing and touching the product which really helps.”

Così is using third-party catering marketplaces like ezCater to expand its business online. The company recognizes such companies help generate a side of its business that Così customers might not yet know about. “It's still new to some people that we cater, and we do it really well too,” DiNatale says. “We really specialize in office catering with salads and sandwiches especially. They're the best sellers—different types of boxes to mix and match and even doing a hot bar with our bowls. It gives a lot of options for them, and when they know the brand they know what they're going to get.”

As far as its internal catering operations, Così has a call center with people customers can call seven days a week for catering, and employs catering sales professionals in all of its markets, “so you can meet with someone and talk face-to-face, even when they're delivering it,” DiNatale says.

“We really do put a lot into the catering in terms of resources and employees, and they've been doing a really good job,” he adds. “For a company that's been around over 20 years, a least in the U.S., we're seeing double-digit growth in catering because of the professionalism of our staff, the investment in the staff, the professional call center, and the great menu. It's an elevated experience. When people want to have a really nice meeting, they're thinking of us more and more for those type of events.”

Is it Time to Switch Up Your Restaurant's Loyalty Program?
Zaxby’s App Gets a Major Rewards Boost
For Sweetgreen, Automation Opens ‘Infinite’ Possibilities