Dutch Bros’ massive growth in the past few years reminds CEO Joth Ricci of a quote from famed author and consultant Jim Collins, who once wrote, “Disciplined people who engage in disciplined thought and who take disciplined action—operating with freedom within a framework of responsibilities—this is the cornerstone of a culture that creates greatness.”

The operative word in that excerpt is “people.” Diligence from operators, development leaders, real estate team members, and others allowed Dutch Bros to open a record-breaking 133 stores in 2022, Ricci says. It enabled the chain to double store count and triple revenue since 2019 and debut 30-plus shops for six consecutive quarters.

In terms of unit count, the only beverage chains bigger than Dutch Bros in the U.S. are Starbucks and Dunkin’.

“Our real estate model is really plugged into a people development model,” Ricci says. “As long as we have people ready and able to operate and execute, we’ll continue to do the development that we've done to grow into it. At the moment that we feel like that slows down or we don't have enough people ready to operate, then we'll pull back on the real estate side to give the people side time to catch up.”

Slowing down just isn’t in Dutch Bros’ present vocabulary. The list of qualified operators keeps growing. Ricci was told a week ago 275 people are in the pipeline and prepared to build out new trade areas. Keep in mind, almost all of Dutch Bros’ upcoming growth is company-operated. Starting in 2008, the brand only awarded franchises to existing franchisees. In 2017, the coffee concept decided to stop franchising and move to a corporately owned system in which operators were recruited from within.

The pivot has led to flourishing sales and unit growth. Ricci calls the past several years a “really good” case study of an organization getting behind a movement, building it together, understanding what it means, and executing it at a confident level. And the CEO emphasizes none of it would be possible without the continued support of franchisees.

“They actually have helped make the company-owned side successful,” Ricci says. “And so I think it's been good teamwork all the way around to make that happen.” 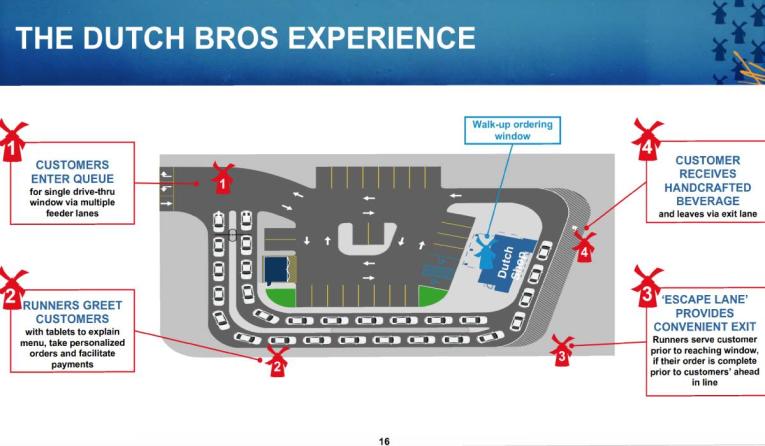 Dutch Bros offers an escape lane for customers to exit the queue after they receive their order, instead of having to wait until the window.

Locations opened since 2017 have 35 percent higher AUVs; the classes of 2020 and 2021 both exceed $2 million. Ricci attributes this to AI and other tech innovation that help Dutch Bros determine which markets would be accepting. He also believes brand equity is strong thanks to social media. There are conversations around Dutch Bros, even in big-time markets where it isn’t close to opening, like New York.

“I think that there's a sense of 'Dutch Bros is coming to our market' type of feel to it or 'to our neighborhood,'” Ricci says. “As the volume of communication and the volume of digital and the volume of PR grows, I think there's just more awareness around the brand and what we do. Certainly our teams create a really great fever pitch to the anticipation that's just coming. And I think we've elevated our game in that area and continue to see good results.”

Because of that extra volume, Dutch Bros has worked to make its drive-thru—which accounts for 90 percent of sales—more efficient. Similar to Chick-fil-A, employees greet drivers outside and take orders, and then two lanes merge into one. To keep lines from getting too long, workers run smaller orders to cars farther back in line, and those vehicles can then take an “escape lane” and exit the drive-thru without having to wait until the window. This layout is built into all new models.

“We can keep things moving, but not jeopardize the experience for the customer who needs to have that conversation with the window,” Ricci says. " … If [a customer] is at the window and she happens to see a barista that she knows or maybe they're just talking and it's really important that [the customer] finishes out that conversation with the barista—we never want the customer to feel like they were rushed or had to move on.”

Dutch Bros is in 14 states. More than 60 percent of new locations in 2023 will be in California and Texas. The remaining stores are scattered, Ricci says. Many will be in existing Western states, like Arizona, Nevada, Utah, Colorado, and New Mexico. There will also be continued growth further east in Oklahoma, Missouri, and Tennessee. New markets this year will be Kentucky and Alabama. 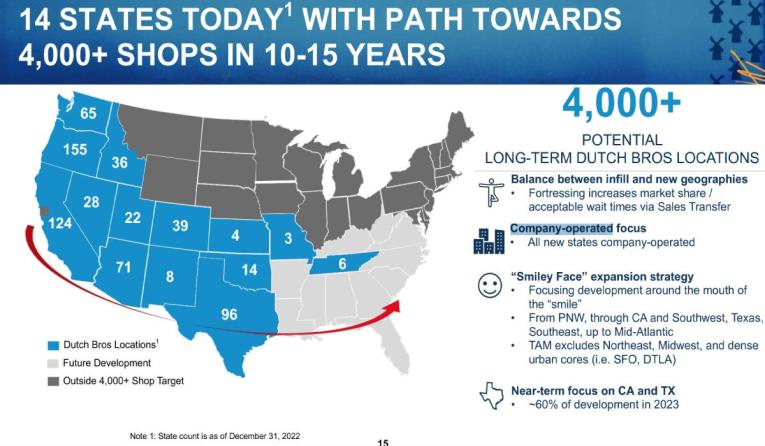 Dutch Bros uses a 'smiley face' strategy to grow because it does better in warmer markets.

“As long as we stay true to who we are and who we've been for 30 years, and we improve the behind the scenes to help execute it and continue to make it easier, we can continue to scale these openings in a way that makes sense for the company,” says Joth Ricci, CEO of Dutch Bros.

Dutch Bros is growing using a “smiley face” approach, in which its growth pattern looks like the lips of a smile. So think directionally from the Pacific Northwest, to California, the Southwest, Texas, the Southeast, and then up into the Mid-Atlantic. This is because Dutch Bros performs better in warmer climates and therefore targets areas that average 61 degrees or higher. More than 80 percent of sold drinks are cold.

“We've looked down to Central Florida,” Ricci says. “We have not looked south of that, but we do see opportunities as we grow up the Eastern Seaboard up into Virginia. We do well in cold markets. Our menu mixes a little bit different, but it doesn't mean we wouldn't do well in the Great Lakes and the Northeast, but we're just trying to be disciplined and try to pace our growth and we figured that was the best way to do it.”

Same-store sales declined 0.6 percent in Q4, including the impact of sales transferring from existing shops to new ones under the chain’s fortressing strategy. On a three-year basis, comps lifted 15.2 percent. In 2023, Dutch Bros projects $950 million to $1 billion in revenue and same-store sales in the low single digits. Long-term, over the next five to 10 years, the chain expects unit growth in the mid-teens, comps in the low single digits, revenue growth around 20 percent, and for adjusted EBITDA to trend higher than revenue expansion.

Looking ahead, Ricci views building loyalty as one of the biggest opportunities. The chain looks at consumers in three buckets—rewards member, non-rewards member, and lapsed rewards member. The key is being able to sort what each guest wants and communicate the right promotions to them, no different than Amazon’s curation process. Additionally, Dutch Bros is still adjusting its labor model to best fit dayparts and working to optimize shop layout. For instance, the company is testing a tap system in legacy shops in Grant Pass, Oregon, that has resulted in improved quality, speed, and service. That will soon roll out nationwide, about 10 shops at a time. Starting in July, all new shops will include the tap systems.

Ricci knows Dutch Bros won’t keep up its growth pace forever. The past three years have been about testing limits. At some point, the brand will plateau and the chain’s annual unit target will level out. But the company isn’t there yet. Not for a while.

“As long as we stay true to who we are and who we've been for 30 years, and we improve the behind-the-scenes to help execute it and continue to make it easier, we can continue to scale these openings in a way that makes sense for the company,” Ricci says.