The Evolution of the Next Emerging Wing Chain

The origin of Wing It On! dates back to Matt Ensero’s teenage years, when he and his friends repeated the same argument each football Sunday—who’s going to get the wings?

The closest store was 30 minutes away, which meant missing part of the game and eating wings that weren’t in the best condition. So Ensero decided to take matters into his own hands.

Ensero and his father sold their company, Straight A School Supplies, to their biggest competitor in Connecticut. Then came the business plan and the first official Wing It On! store in Waterbury, Connecticut, in August 2011. Fast forward three years to 2014, and the brand started its franchising journey with a location on the campus of Central Connecticut State University. From there, the company expanded to Linden, New Jersey. Ensero eventually moved to Raleigh, North Carolina, in December 2019 to take advantage of what he perceives to be a high-growth market.

“The part of the country I was coming from, we actually lost 10 percent of our population in Waterbury, Connecticut, over the 10 years that I've had a store there,” Ensero says. “But at the same time, we were able to grow sales year-over-year for 10 years. But losing 10 percent of the population, the writing was on the wall that the Northeast doesn't have a lot of high growth markets, and to get this into higher gear, we were going to have to start targeting other areas of the country.”

The emerging business is now up to nine locations—including a food truck—with the latest restaurant opening in the Houston area. Another 11 stores are currently in the pipeline. Wing It On! entered the pandemic aligned with the growing trend toward convenience, and sales have proven as much. Before COVID, the brand was 85 percent off-premises, and as a result, sales jumped 25 percent, year-over-year.

Ensero credits much of that success to Justin Egan, his chief marketing officer and de facto tech guru, who convinced him to invest heavily in the digital experience.

“Thank God he did that because from day one of the pandemic, we didn't have to backtrack and create that infrastructure,” Ensero says. “It was already in place. We had a really robust digital experience, and customers really were aligned with where our brand had grown into at that point.”

Last year, Wing It On! debuted four units, including one corporate store. In addition to the Texas location, the brand plans to enter Spring Hill, Florida, which is an hour outside of Tampa, and Trussville, Alabama, a suburb of Birmingham. Both are scheduled to open late April to early May. In the Northeast, the restaurant has development deals signed for Long Island and Boston, but operators are still searching for real estate. In the South, the chain recently signed a five-store development deal for South Atlanta, and it has multiple deals in Texas that should be signed within the next two weeks—each of which expects to be three to five stores.

The long-term goal is to reach 100 units by the end of 2024, and Ensero stands by that. He acknowledges the ramp up has been slow, but that’s by design. He and his team adopted a methodical approach to franchising because they knew if there were any “holes in the fence,” it would only get worse as the company scaled. So Wing It On! took time to fill those holes and find other ones.

Over the years, the brand shored up operations, marketing, and digital departments—basically everything it needed before hitting the exponential growth button. This includes bringing in an operations consultant who worked for a Fortune 500 company, onboarding a marketing firm to support franchisees, and hiring a district manager and franchise operations specialist.

“We're putting all the pieces and we’re putting all the right people on the bus before we leave the parking lot,” Ensero says. “And that's why it's been kind of slow. We want to make sure we were able to support that growth because there's nothing worse than unsustainable growth.” 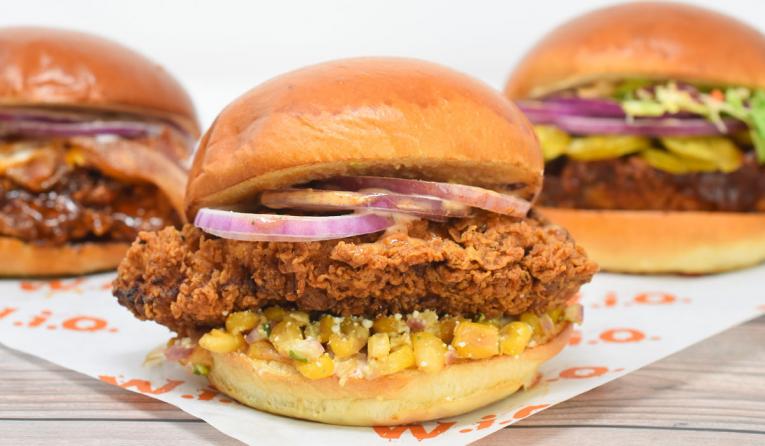 Wing It On! separates from the pack with chicken sandwiches as well as wings.

Wing It On!’s rise comes at a time when the wing category is gaining popularity because of its ease in the kitchen and portability. A host of virtual wing brands have surfaced during COVID to provide an extra revenue stream, including big-time players Chili’s and Applebee’s, which launched It’s Just Wings and Cosmic Wings, respectively. Both casual-dining brands rolled out virtual concepts to more than 1,000 stores nationwide.

Servings of chicken wings increased 7 percent in 2020, despite an 11 percent decline in traffic, according to the NPD Group. A record 1.42 billion wings were consumed over Super Bowl weekend, which is 2 percent more than 2019, according to the National Chicken Council’s annual Wing Report.

Ensero says it’s difficult to gauge right now how the influx of wing brands affected Wing It On!’s market share. He thinks the true analysis will be completed once the pandemic is over, most Americans are vaccinated, and the country returns closer to business as usual.

Personally, he doesn’t feel the saturation will affect Wing it On! too much because the brand always focused on serving an elevated wing. The company’s goal is to cook wings that are fresh, never frozen, and authentic to a true buffalo style experience—something Ensero says can’t be matched by all the virtual concepts.

He also points to the fact Wing It On! offers chicken sandwiches, another item that’s seen a monumental rise in the past year and a half.

“I just think there's always room for a best-in-class product,” Ensero says. “I mean, if you offer an excellent wing and you could do it with excellent customer service and a digital experience that's aligned with what customers are looking for, there’s always going to be room for that best-in-class product, and that's what we're relying on to get us through and put our heads above all the mediocrity.”

Increased competition and demand has contributed to a volatile market and notable bump in wing prices. This forced Wing It On! to look at other parts of the bird to sell. In January, the brand introduced crispy Thigh Wings.

“On top of that is the extraordinary demand from these new virtual wing brands that just popped up overnight,” Ensero says. “So there's a severe supply demand imbalance right now, and it seems to be that the linchpin is the COVID-19 pandemic. So people we're talking to are expecting the market to return to historical norms by midsummer if it all goes well. We have a great relationship with our food service distributor, Gordon Foods. We've heard that there's been shortages in the market, but because of our loyalty to our vendors, we haven't experienced any shortages throughout the pandemic.” 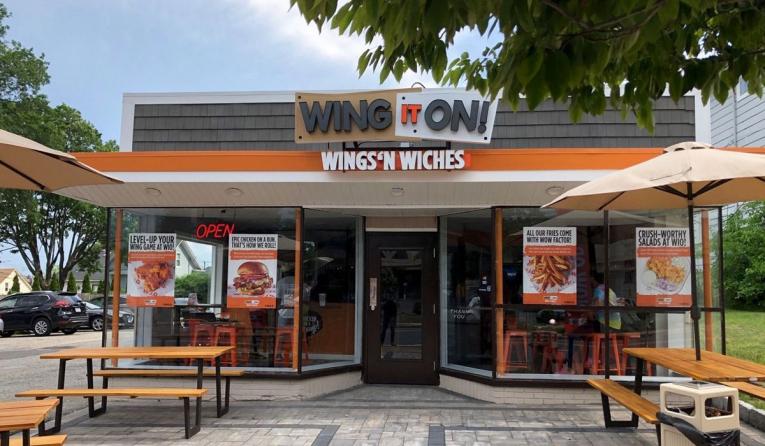 Wing It On! is grappling with soaring wing prices, but believes the market will quiet down.

Ensero say it’s a “real win-win” for both consumers and franchisees. It gives guests a way to enjoy a bone-in wing experience, but for a lower price point, and gives franchisees an opportunity to strengthen menu mix with a high-margin item. The Thigh Wings have sold particularly well in Southern stores, where there’s a stronger consumer preference for both dark meat and bone-in chicken.

Talking to people within the supply chain, Ensero says the expectation is that as the pandemic winds down, there will be a return to normalcy in the wing market. Much of the pressure is due to COVID-related issues, such as farmers and producers not being able to fully staff their facilities to match demand.

Wing It On!’s menu innovation won’t stop there. The chain is planning to roll out a Nashville Hot program, which the brand identified as a top-three food trend in the U.S. The offering will be presented in three ways—wing flavor, chicken sandwich, and chicken tenders. The product has been in the test kitchen for the past three months, and the culinary team has worked to put Wing It On!’s own twist on the recipe. The concept is targeting a launch that will coincide with March Madness and the beginning of the NCAA Tournament.

The brand is also looking to debut cauliflower wings—a meat-free item that simulates the crunch of a chicken wing and is more cost-effective than other meat substitutes, Ensero says. The cauliflower wings will be hand-battered and fresh to order, just like the rest of the menu. Wing It On! expects to roll out the item this summer.

The new menu items factor into Wing It On!’s success formula as it moves into the post-COVID world and battles a surging category, which is to continue offering customers what they fell in love with during the pandemic.

“We just can't rest on our laurels and take the customers for granted,” Ensero says. “There's going to be a big pent-up demand for consumers to get back into full-service dining rooms and sit down with their friends and family. But the overall trend for years now has been shifting towards off-premises dining. So as long as we continue to execute on what makes Wing It On! great, I think our fans keep coming back for more.”