Fazoli’s is Witnessing its Best Summer Ever

Fazoli’s sales increased 16 percent and traffic grew 17 percent through May and June.

No one could have predicted the intensity to which COVID impacted the restaurant industry.

But to navigate such an unprecedented environment and also rake in record-breaking sales? That seemed equally unlikely back in March.

But not for Fazoli’s.

In July, the brand set four weekly sales records. On July 31, it hit its highest sales and traffic numbers in a single day. According to CEO Carl Howard, more than 70 of the chain’s 220 restaurants have eclipsed sales records. He predicts that 80 percent of units will reach record marks in 2020.

In August, sales are up 16.6 percent and traffic 20.4 percent. And that’s despite a 3–5 percent decrease in average check—which also runs against the status quo of late.

“We’re up 14.2 percent [for the week] and I’m kind of disappointed, seriously,” Howard says.

The journey toward those eye-popping numbers began when stay-at-home orders were announced. That night, senior staff members held a meeting and then hopped on calls Thursday, Friday, Saturday, and Sunday. By Monday, Fazoli’s formulated a plan to preserve liquidity and assist franchisees.

Corporate abated and deferred royalties and worked with operators to obtain Paycheck Protection Program loans. They also called every single vendor, even the one that supplied music in the restaurants. Howard says not everyone worked with them, but a majority did.

At the store level, sanitation and safety moved to the forefront. Fazoli’s won the Steritech Excellence in Food Safety Award during the spring, and Howard notes that many brands have copied their programs.

Then about five weeks into the pandemic, Fazoli’s made a conscious decision to go on the offensive. That’s when matters began to shift.

“Once we got to the middle to the end of April, I’m like, all right, I’m done talking about cost cuts,” Howard says. “The only thing we can do from now to cut costs is going to hurt the brand. Let’s go on the offense. So from now on, I want our Monday and Friday meetings to be all about the things we can do to go on the offense.”

When stay-at-home orders were first lifted, the company’s plans were already in place. Social distancing signs were up and plexiglass was installed. When states opened, so did Fazoli’s.

The restaurant next turned to what Howard calls extreme value. The CEO explains that it’s something the chain could afford to do since they’re a low cost of goods brand.

Howard suggested a $20 Super Family Meal: a pizza, buckets of fettuccine Alfredo and spaghetti, 16 breadsticks and a gallon of tea or lemonade. Some liked the idea while others thought it may be too hard on operations. Fazoli's went for it anyway.

About 2,000 family meals were sold in the first week, and Howard says customers raved about the deal on social media.

“Really it’s enough to feed a family of four twice that day, and that’s exactly what some of our consumers said,” Howard says. “As we started promoting that, we actually went back and put our marketing plan back in place, and the next thing you know, we just started getting really busy.” 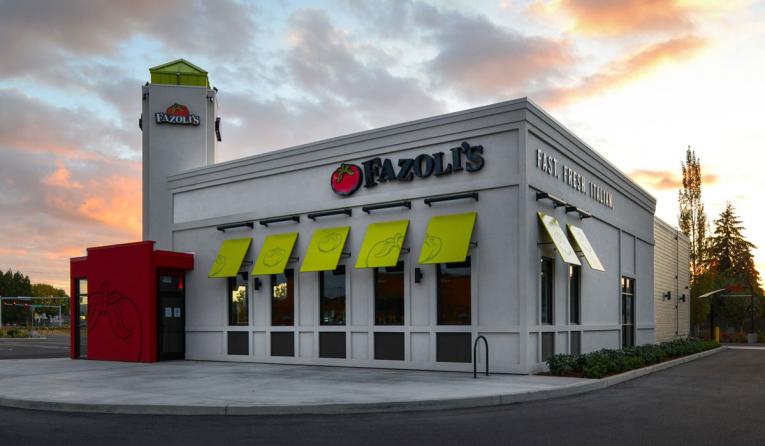 Fazoli’s, which held two discovery days in the past two weeks, has opened four spots in 2020, and plans to open nine more before the end of the year.

Even with open dining rooms, the company’s model switched to majority off-premises via carryout, delivery, curbside, and drive-thru.

While customers waited in the drive-thru, employees would distribute breadsticks and napkins. At high-volume units, workers stood outside with a tablet to take orders about five cars back. The fast casual is allowing customers to pick up to-go orders through the drive-thru, which wasn’t planned at first because of the potential logistical nightmare. But it’s proven to work well, especially with cook time being reduced by 20 seconds.

Fazoli’s sales increased 16 percent and traffic grew 17 percent through May and June. In addition to the record-breaking sales in July, the chain experienced a 65 percent increase in drive-thru sales, 410 percent hike in online ordering, and 200 percent lift in delivery orders.

“I really think those three pieces—the fact that we nailed the sanitation piece, which we continue to do so today, we promoted extreme value, and really upgrading the convenience and speed of our experience has really paid off,” Howard says. “Unfortunately, there’s been a large amount of restaurants that are now marked as permanently closed, and maybe some of that is leading to our sales success as we do operate some small markets. But I couldn’t be any prouder of everybody in the field, our franchisees, our senior team, and our home office group.”

Store development and investment are proceeding at the same pace. Howard says Fazoli’s deal is tough to top—the chain touts no franchise fee or royalties in the first year. The brand puts a focus on helping new operators build liquidity in the beginning. It also concentrates on renovating quick-service shells that have a drive-thru or the ability to have one.

Howard says that for Fazoli’s, refreshing locations is below $400,000.

“There’s two brands that convert well for Fazoli’s and there’s a lot of them on the market and in some cases, their tables and chairs are fine. And I don’t care if their chair bottoms are orange and ours are red,” he notes. “If they’re in good shape, that’s fine. But you have to put in the menu and the equipment and the smallwares and the iconic brand elements in there and outside … You don’t have to strip everything away.”

Fazoli’s, which held two discovery days in the past two weeks, has opened four spots in 2020, and plans to open nine more before the end of the year.

The CEO says he wouldn’t be surprised if the company didn’t have 30 to 50 units in process in the next two years.

“We are going to be a brand that is going to sneak up on people. Not only through our growth, but through our performance,” Howard says. “We’re a highly relevant concept. No one else is doing what we’re doing. It’s very hard to do what we do. I think you’ll see some sort of massive growth expansion come in 2021 and 2022 that people just didn’t foresee. People will say, ‘Where did these guys come from?’”