The multi-brand platform has 270 nontraditional stores in its pipeline.

The key, however, is Richards and his team never disengaged with the business, putting them in solid position to support development activity when it ramped up in 2021. Focus Brands, the parent of Schlotzksy’s, McAlister’s, Moe’s, Jamba, Carvel, Auntie Anne’s, and Cinnabon, entered 2022 with 972 nontraditional units open throughout the U.S., with another 270 stores in the pipeline.

“2020 was tough for everybody. But capital started to get spent. Plans were being made for post-pandemic construction and development,” Richards says. “We were there to pick up franchise sales ourselves that frankly heading into 2021, we really didn't expect that we ended up having a banner year.”

Focus Brands defines nontraditional as an outlet where the primary reason for a visit may not be food. That includes certain drive-thru units, if the restaurant is tacked onto a convenience store or travel center.

Richard’s team focuses on specific nontraditional segments as opposed to geographic regions and being a jack of all trades. One individual covers travel centers, convenience stores, and amusement and entertainment, one oversees airports and train stations, another looks over big-box retail and ghost kitchens, and a fourth oversees colleges, health care, and casinos.

“That's really how we've structured where we can provide the greatest level of support and expertise to the folks on the buying side, and we've had really good success in each of those buckets,” Richard says.

Focus Brands has 80 airport locations, with Auntie Anne’s being the most popular. However, Jamba has attracted much interest as of late, Richard says.

“It's an important channel business for us,” Richard says. “The benefits for us are it provides us really good brand awareness for the brands in our portfolio. For our operators, it provides them really good ability to drive a very attractive level of sales in a relatively small space.”

Outside of airports, Pilot Travel Centers inked a deal for 10 Cinnabon locations in 2021, and new partner Mountain Express Oil signed on for 50 Schlotzksy’s and five Moe’s restaurants throughout the Southeast.

Additionally, Focus Brands will soon open an Auntie Anne’s at Six Flags in Arlington, Texas, a move that could lead to further expansion at the amusement park’s roughly 20 other locations across the U.S. Ghost kitchens are gaining momentum, as well; the multi-brand platform has opened nine locations in the U.S. and Canada with Ghost Kitchen Brands. 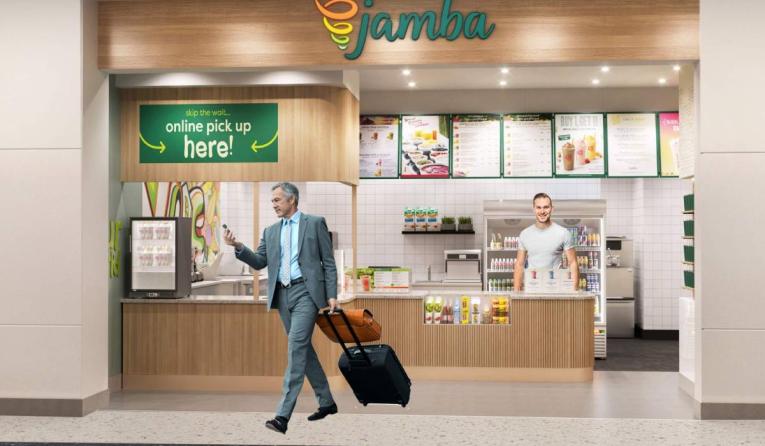 A rendering of Jamba's unit in the Salt Lake City International Airport. 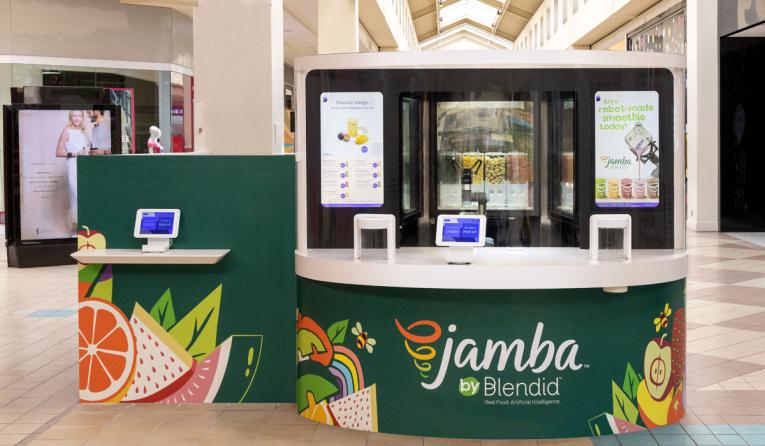 Nontraditional locations have also proven to be the tip of the spear when it comes to technological innovation. After pilot testing Jamba by Blendid fully robotic kiosks at a shopping mall and big box retailer, Focus Brands expanded the experiment to the campuses of Georgia College in Milledgeville, Georgia, and Kennesaw State University, in Marietta, Georgia.

The company plans to open 10 test locations through the rest of 2022.

“Early results from both of those campuses have been very positive, and that vehicle itself really gives us the potential to get into nontraditional venues that may not have quite the traffic to develop a full Jamba shop or location,” Richard says. “This could get us into locations like healthcare, big box retailers, universities, travel centers. I'm really bullish on the potential future opportunity that that could present.”

Focus Brands sells most of its franchises to entities that have long-term contracts in place or own the real estate. Examples would be the operator of a travel center or a company that has a foodservice agreement with a university.

In other cases, the company goes through a bidding process, which is mostly done with airport and military base locations. To put together the best possible package, Richard says the company anticipates—as much as two years ahead of time—what RFP may come out. It also makes sure to network with developers well in advance.

“Our role really comes into play where we're really working to marry the right brands with the right bids,” Richard says. “We'll work with [operators] on looking at our portfolio, and then which of our brands will provide them with a good leverage or a good point of differentiation and which will complement what else they're trying to put into their bid package.”

“If we've done our homework well, A, we’re getting up to bat with a pretty high frequency in those proposals and then B, we find ourselves on the winning side of the bid,” he adds.

Deciding which brands to place in what nontraditional space—especially with a portfolio of seven viable concepts— is a multi-stage process.

Richard says it begins with asking what the operator is most interested in and which restaurants have distribution capability in the area. Then Focus Brands determines what fits best within the market, followed by a look at the bigger picture, ensuring there’s no cannibalization of existing traditional outlets or disruption of the overall market plan.

If Richard receives the green light on all of those measures, the conversation centers around the specific unit—how big is the space, does the menu need to be limited, is drive-thru possible, etc.

If the opportunity is right, co-branding becomes the best option.

“I'd say when real estate is presented where we've got a footprint to work with that's large enough to consider adding a second brand, we'll work hard to do that, especially if it complements the offerings that are in the venue,” Richard says. “The ability to drive incremental sales across a broader daypart mix is really attractive to the operator. It's attractive for us, as well, and it really gives the operator the ability to leverage the real estate investment that they're making to get more out of that asset.”

With traditional real estate becoming saturated, Richard says more attention has been directed toward the nontraditional world, and that ball began rolling well before COVID arrived. The good news is that developers and operators have more interest in national brands that have the wherewithal to survive unprecedented economic events.

The competition is tougher, but Richard still likes Focus Brands’ chances. He believes the company will beat the number of deals it struck last year.

“There's seven brands in our portfolio. Seven category-leading brands,” Richard says. “It really gets us an ability to enter a conversation where a prospect might be interested in one brand and we'll end up working with them on placing perhaps a different brand or maybe several brands into the marketplace through that initial inquiry.”