Fuku is a dining destination in New York City for those who want to experience Chef David Chang’s cooking in an informal setting, without a reservation. Now, Chang's fast casual fried chicken brainchild is ready to make its debut across the nation.

Since opening in 2015, Fuku’s reach has expanded to three locations across the Big Apple and a new store recently opened in Boston. Fuku’s growth has been thoughtful, and that won’t change anytime soon, says Alex Muñoz-Suarez, Fuku’s new chief executive officer.

Muñoz-Suarez, who previously served as the president of Momofuku, is taking a hands-on approach to the brand’s development. Only a month into the job, Muñoz-Suarez has been on the ground helping the Fuku team at the Boston store and spearheading an initiative to launch an incentive program for hourly workers.

It’s an exciting time for the chain, Muñoz-Suarez says, and everyone at Momo Holdings—Fuku’s parent company—is ready to kickstart the process. Fuku’s growth strategy is basically two-pronged, with expansion of brick-and-mortar stores and through concessions in stadiums, he says. Fuku’s biggest growth driver is expansion in the latter space. 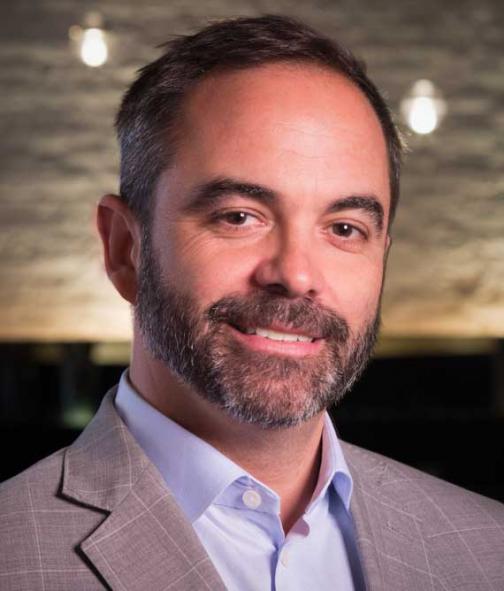 Financially, it makes sense for Fuku to take advantage of moving into the concessions arena. It’s quicker to open and so far they’ve had a lot of success generating revenue, Muñoz-Suarez says.

“It’s a very tight inner circle that runs and operates those arenas or those stadiums,” he says. "And once you get the reputation that you're good operators and well received by guests, the emails come through fairly quickly, and it requires little to no capital on our side.”

Sports fans can find Fuku stands in some of the nation's biggest stadiums, including Madison Square Garden in New York City; Audi Field in Washington D.C.; and Lincoln Financial Field in Philadelphia.

As far as expanding the footprint of its other stores, Fuku is in a solid place to ramp up, Muñoz-Suarez says. After working out the kinks over the past few years, operations have been fine-tuned. Another store in New York City will open this summer.

“It takes a little bit of blood, sweat, and tears,” Muñoz-Suarez says. “But after that, then you get the process well, and systems and processes right. And then it's much, much easier. “

Growth is more of an art than a science, Muñoz-Suarez says.

“We look at each other and just get a sense of like wow things are much better, operations are smoother, our food costs are more in line,” he says. “[We’re] introducing new things—which is a thing that’s near and dear to Dave and the way he operates restaurants. We've now got operations that seamlessly get us through that process in a much smoother way.”

As Chang has grown his restaurant empire across the country, it’s only natural for Fuku to open in markets where his restaurants already have a presence.

“We're sort of planting our Fuku flag to piggyback off of the success Dave and Momofuku’s has had with Majordomo and the continued development of Momofuku brands in the Los Angeles area,” Muñoz-Suarez says. “We have the Momofuku Noodle Bar opening up there shortly. It’s a market that we're continuing to see continued growth in.” 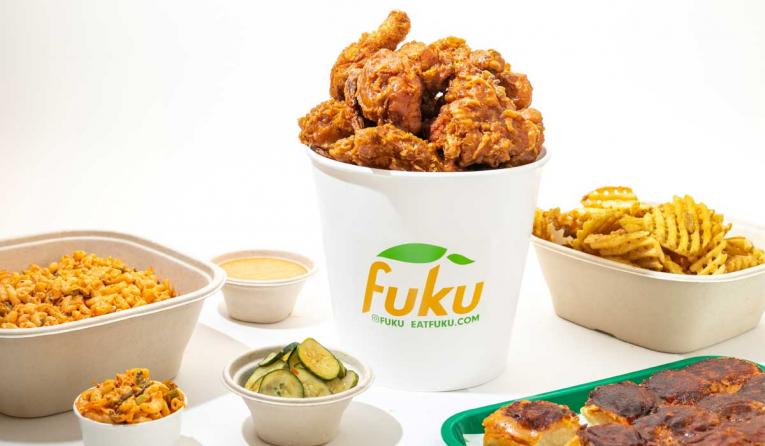 Sports fans can find Fuku stands in some of the countries biggest stadiums, including Madison Square Garden in New York City.

The brand will always have a presence in New York City, but with the rising cost of real estate, expansion needs to happen elsewhere, too. California is the next market Fuku will be opening with a restaurant in Santa Monica slated for summer. Washington D.C. is another area Momofuku has a presence where Fuku could thrive beyond the concession stand with brick and mortar stores.

Muñoz-Suarez doesn’t have a specific goal to hit when it comes to growth, and the company isn’t going to stretch its resources just for the sake of reaching big numbers. He sees Fuku having more success in markets where consumers already know the Momofuku brand and who Chang is.

“I am a big proponent that Fuku is literally almost like the gateway for the Momofuku empire,” Muñoz-Suarez says. “You can come in and literally have a sandwich for $3 and then we can open your eyes to everything that Dave has done with not only Fuku, but also like Noodle Bar and Momofuku Ssäm Bar.”

A $3 fried chicken sandwich at Fuku can lead to a Michelin star experience at Momofuku or Ko, “where its a unique experience only a handful of restaurants around the world can offer,” he says.

Just as Chang plays with the menu at his other restaurants, it’s no different at Fuku. People come to try the fried chicken sandwich and stay for the innovative menu. At the end of the day, the fast casual is a part of Momofuku and Chang will continue to bring new and exciting dishes to the offering.

“We're always going to innovate,” Muñoz-Suarez says. “There's obviously going to be the things that really resonate with our guests. But we're always innovating on the menu to make it fresh and exciting.”

Chang’s evolution as a chef and leader is far from over. The new dad is becoming more relaxed and allowing others—like Muñoz-Suarez—to lead the growing company. His focus now is on searching for ways to improve himself as a leader and ways to lift employees up and show them their worth while working in one of his restaurants.

The culture across the restaurants in the Momo Holdings family has evolved with the industry. Execs are aware of the changes that need to be made in order to retain employees in such a competitive market. As the Fuku brand grows, Muñoz-Suarez says some of the original team members are still on board helping with training and opening new locations.

“You start to look at the development of the team where it was two years ago, and how that team has grown,” he says. “Many of those people are still within the company. In fact, two of the original general managers that opened the first two stores in New York City are still with us continuing to open restaurants.”

Not only are these longtime employees helping with the logistics, they are also continuing traditions and explaining the culture of Fuku that has developed over the past four years.

Muñoz-Suarez knows that the company wouldn’t survive without the hard work of hourly employees. However, when it came to bonuses and incentives only salaried workers or corporate team members had the chance to earn them. That’s just not fair, he says.

One of his first tasks in his new role was to create an incentive program for the dishwashers, line cooks, cashiers, and fry cooks of the brand. Chang was on board to help get something up and running sooner rather than later.

The program launched July 1, a little more than a month since Muñoz-Suarez became CEO. 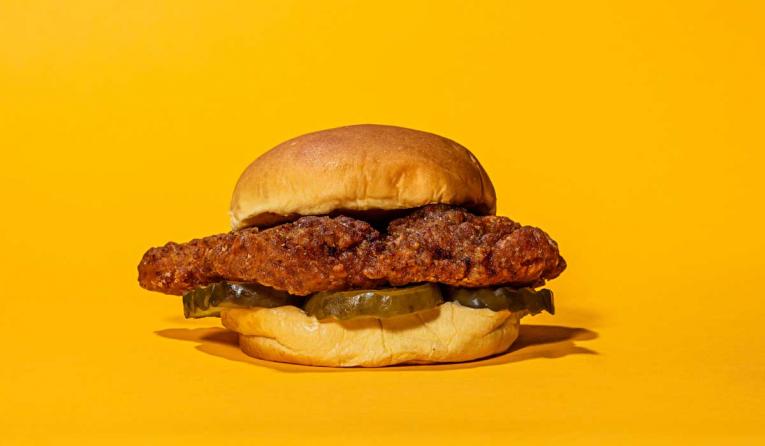 A $3 fried chicken sandwich at Fuku can lead to a Michelin star experience at Momofuku or Co, “where its a unique experience only a handful of restaurants around the world can offer,” Muñoz-Suarez says.

“This has been something that Dave’s been pushing on hard in order to make sure that we're bringing everybody and not just management, not just executive, not just general managers, but everybody focused on the same sort of parameters or the same goals,” Muñoz-Suarez says. “Keeping the staff with heartbeats running and bringing butterflies to everyone's belly. And like the heart racing is part of what it takes to keep everyone excited and providing great customer service, including our great food.”

The program is broken into three parts: individual performance (are employees dressed properly, are they showing up on time), guest feedback (based on forms from guests, online reviews, and internal feedback forms), store operations (how the store is performing financially, are they coming up with innovative menu items).

“We’re awarding our hourly staff for that,” Muñoz-Suarez says. “And again, given where we are today in the market, which is a market that is almost 100 percent fully employed, keeping that staff happy.”

In order for the incentive program to succeed in retaining employees, the Fuku team acknowledges training can’t stop once a store opens. Muñoz-Suarez is looking for ways to continue to develop and train employees on a consistent basis. This is not something they are trying to force on employees, it’s something employees are craving, he says.

An internal survey revealed employees ranked money as the third important part of staying incentivized. Work flexibility came in at No. 2 and more training landed at the top of the list as the highest priority for employees.

“Training and development is the one thing—more so than even money—that our staff is begging and asking us for,” Muñoz-Suarez says. “These are all things that are near and dear to Dave and the Momofuku culture.”

HMSHost Leads Food Tech Evolution Inside Airports
The Next Wave of On-Demand Restaurant Delivery
Is Your Restaurant Franchise Marketing Outdated?