The Future of Firehouse Subs

If you want to experience a microcosm of the forces impacting the future of Florida-based, fast-casual Firehouse Subs, franchisee Clint Rohletter’s store near Atlanta’s Georgia Tech is a good place to start.

Five years ago, it was one of the few quick dining options in its West Midtown neighborhood. Now the market is flooded with new concepts and established brands trying to claim their piece of the out-of-home occasion. Traditionally, the Firehouse dining room saw a rotating mix of blue-collar, shift workers; professionals from nearby office parks; and Tech students and faculty. Few took their food to go. These days, however, the opposite is true: More orders are being consumed off-premises than ever. And, Rohletter’s team is sending out sandwiches via six different third-party delivery services: UberEats, Zifty, Postmates, Amazon, GrubHub, and DoorDash.

What’s happening at Rohletter’s store is indicative of what’s happening in quick service overall: the competitive set is changing at a rapid pace, while off-premises is growing in demand and complexity as consumers demonstrate their willingness to trade cost for convenience.

Both developments present challenges that Firehouse and its network of franchisees are proactively trying to solve while maintaining what Firehouse Subs CEO Don Fox characterizes as a “food integrity as a business model.”

On the competitive set side, Subway’s recent spate of store closings coupled with the expansion of convenience store brands such as Wawa and Sheetz makes for a sandwich segment where everything is disrupted and fragmented, says Jeremy Scott, senior research analyst covering restaurants and protein sector at Mizuho Securities. Mizuho Securities. In the segment’s overall favor are low protein prices and producers focused on value-adds and innovation. However, as with the industry at large, a tight labor and commercial real estate market are slowing growth.

Still, Scott says, how those forces impact a struggling Subway vastly differs from how they impact an up-and-coming chain such Firehouse, which doubled its store count from 500 to 1,000 in less than five years (2012–2016).

“In a segment where the No. 1 operator is showing signs of instability, there is plenty for smaller operators to be optimistic about,” Scott says.

And Fox is optimistic. While he’s hesitant to draw conclusions between Firehouse’s sales and Subway’s closings, he is pleased with the brand’s positive year-to-date performance.

“We’re having a really great year,” Fox says. “Especially at a time when the industry is lackluster at best.”

Helping to drive those sales is a new national advertising campaign. Created by Dallas-based Richards Group, best known for its Chick-fil-A work, the new campaign is heavily focused on digital and video, a first for Firehouse. The chain is also investing heavily in menu innovation under the leadership of Culinary Director Jay Miller, who has been in the position just over a year.

Also new to the Firehouse family is its updated to-go, sandwich wrap, which was developed in direct response to the increase in off-premises dining occasions seen across the Firehouse system the past two years. “Our goal was to get the to-go experience as close to the in-restaurant experience as possible,” Fox says. The solution is a sugar-cane based wrap that better retains heat without making Firehouse’s signature hot subs soggy.

New packaging is just one way Firehouse is responding to the off-premises dining shift. Working with several third-party delivery companies at once, like Rothletter does, has become the norm across both Firehouse franchise and company stores. In South Florida, for example, some Firehouse stores are seeing up to 30 percent of orders come through third-party, meal delivery. High-volume operators are hiring additional employees just to manage the incremental business, says Firehouse’s South Florida area rep, Ted Tallman.

“I can have all the time and money in the world, but the bottom is if I don’t have people, the business doesn’t operate." — Don Fox, Firehouse Subs CEO. 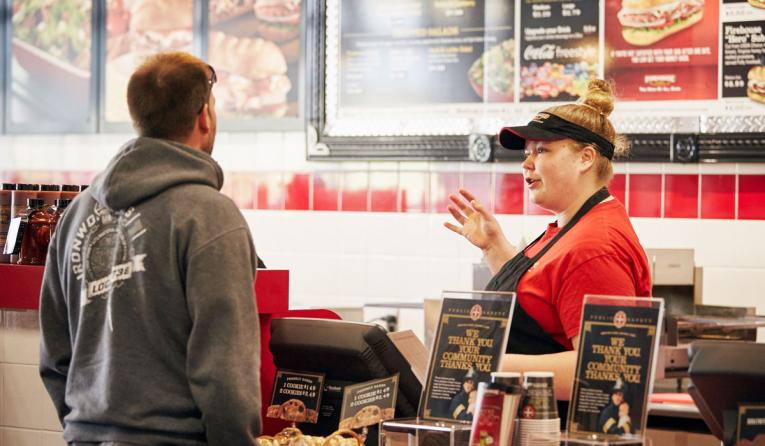 Firehouse Subs wants its off-premises experience to measure up to its dine-in service.

Still, getting into the delivery game was not a choice made lightly at Firehouse. The high fees (20­­–30 percent per order) were reason enough to be apprehensive, but Fox also had concerns about product quality and food safety. But he got on board with a few franchisees testing the services and was pleased to see “incredible success stories with significant sales.”

In fact, the incremental sales were significant enough that in-house delivery is now on the table at Firehouse. Fox believes the model can work in conjunction with third-party. The challenge will be hiring drivers. “We’d be expanding at a faster pace in markets if we were able to recruit all the drivers we need as fast as we need them,” he says.

The societal shift to off-premises dining is also changing the way Firehouse thinks about its store design. Rothletter’s store uses a standard, mass-market file organizer to manage its six meal-delivery service tablets. But those tablets are still housed in a space not designed for them. Moving forward, that might change. New store designs might have smaller dining rooms to account for less in-store eaters. The self-service beverage stations might move from the back of the restaurant to the front to make it easier for delivery drivers to fulfill drink orders. And, there is talk of carving out a space specifically for online/third-party pick-ups.

All of this is up in the air as Fox and his team weigh the pros and cons of responding to market trends that might dramatically impact business—for a short time. The long game, Fox says, remains focusing on making hearty, flavorful food and keeping the people who make it happy.

“I can have all the time and money in the world, but the bottom is if I don’t have people, the business doesn’t operate,” he says.