Robert Earl and Guy Fieri opened their chicken-and-sauce concept last year. Now, amid growing popularity, they are expanding to a second location and beyond
Web Exclusives | August 15, 2019 | Rachel Pittman

Robert Earl and Guy Fieri see a mix of company and franchisee-run stores across the U.S. in the futur

When restaurateur Robert Earl of Planet Hollywood fame met chef-slash-entertainment-personality Guy Fieri, he knew they needed to work together.

“We got on like a house on fire,” Earl says. “I got to know Guy Fieri when we were both in business with Caesars Palace, and I spent time with him and saw his impact along the Las Vegas Strip. We agreed to look for a business that we could seriously pursue together and we decided that the sector that most interested us was chicken.”

The first location of Chicken Guy!, the quick-serve chicken-and-sauce concept born of the two’s friendship, opened last year in Disney Springs in Orlando. Now, the duo is gearing up to open their second spot in Miami’s Aventura Mall at the end of August. It’s a move that comes on the heels of their newborn store’s wide popularity in Disney Springs, and one that marks the beginning of their pursuit of nationwide expansion.

Chick-fil-A rules the chicken category. But why?

Ranking the top chicken chains in America by sales

So far, the Disney Springs store has brought in customers that range from families on vacation to Walt Disney World cast members to millennials looking for a meal high in value and taste. Earl says he sees tourists return more than once on a single vacation, and each day the brand receives digital shout-outs from customers who share their favorite sauces on Instagram using #chickenguy.

But the upcoming Aventura Mall location is a way to test the brand in an arena that has more competition. The shopping center is the second-largest mall in the U.S. by square feet of retail space, and has a food court to match. “The mall has a great Shake Shack, a very successful Chipotle, and a lot of other brands, so we feel it's a good place to put ourselves up against everyone. There’s high traffic, plus a cross section of every type of consumer and every age group,” Earl says. 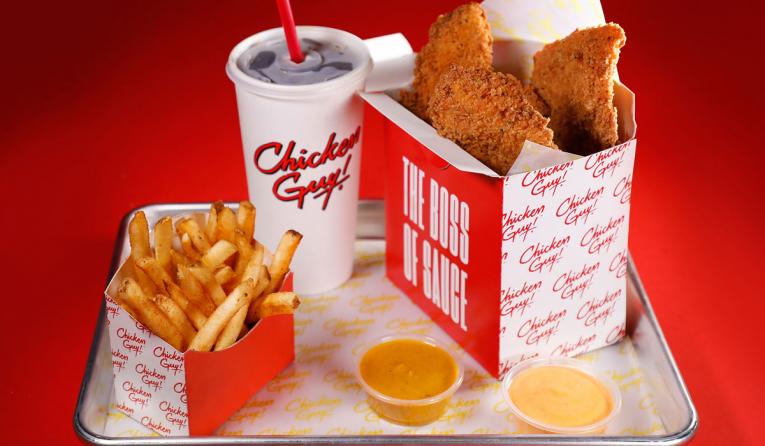 At Chicken Guy!, the sauce is the secret sauce, so to speak.

What sets Chicken Guy! apart from other chicken brands—and what makes Earl and Fieri sure their brand is ripe for widespread success—isn’t its signature, pickle-brined chicken tenders and sandwiches, coated in a mix of Fieri’s secret spices and served crispy-fried or grilled.

Instead, the secret is in the sauce. When Earl and Fieri teamed up on the concept they looked for ways to serve a quality, classic menu item with a unique twist. The differentiator turned out to be the 20-plus sauces Fieri concocted for the brand, ranging from tangy options like Cumin Lime Mojo to sweeter, spicier offerings such as Sweet Sriracha Barbecue. This catalogue of made-from-scratch sauces is the brand’s hallmark, giving guests a chance to customize their flavor experience.

Chicken Guy! orders are accompanied with two sauces of the customer’s choosing, and eating in-store also includes a visit from a Sauce Slinger, a team member who brings over tastes of additional condiments to guests. The brand’s loyalty program is built on its sauces, too; Sauce Squad members are rewarded with two extra sauces when they show their membership card with an order. “I think it’s a little bit of fun and it gets people more experimental,” Earl says. “It's a reason to come back and change the chicken through the sauces. It makes it a different experience every time.” 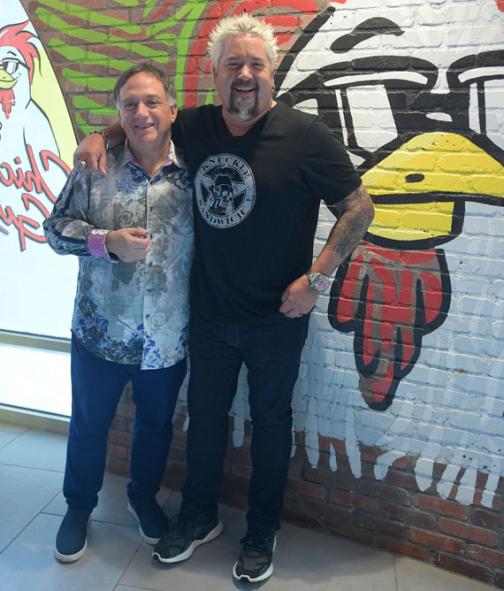 Operating in entertainment spaces like Disney Springs and Aventura Mall requires mixing flavor with convenience, too, and Chicken Guy! strives to capture the best of both worlds for customers. Its product is affordable—three crispy-fried or grilled tenders and two signature sauces ring up at only $5.99—and its counter-service design is particularly suited to large crowds. Team members pass out handheld menus to guests in line and the menu is also displayed on large digital boards overhead, meaning that customers are familiar with the options by the time they reach the counter and order. Guests then find a seat and their food is delivered to the table, upping employee-customer interaction and moving people into seats more quickly.

Beyond the two Florida locations, Earl and Fieri are starting a large-scale expansion of their casual chain into a pair of future locations that are also entertainment spaces—FedEx Field, the Washington Redskins’ stadium, and Levi’s Stadium, the home of the San Francisco 49ers. Earl expects the two stores to be open before next season starts.

After this expansion, Earl and Fieri see a mix of company and franchisee-run stores across the U.S. in the future, but they aren’t looking to rush ahead in the growth process. The plan is to choose their locations and franchisees carefully. “We want to build out a few locations geographically in Florida first. We are looking for franchisees who have a lot of local knowledge and who are well-funded. Ideally, they will have been in the hospitality business before. We want franchises in places that are geographically sensible,” Earl says.