Hooters is Ready to Disrupt the Fast-Casual Segment

The offshoot Hoots Wings expects to reach 100 units by 2023.

As the restaurant industry lifted itself out of the recession in the early part of the 2010s, Hooters recognized a changing of the guard.

Fast casuals were emerging and on the brink of explosion. In the back of the house, the smaller footprint and limited overhead appealed to operators hoping to improve efficiency. In the front, consumers were drawn to the increased convenience through takeout and delivery—a trend Hooters noticed at its hundreds of stores.

In recent years, full-service concepts have implemented off-premises—some even before the pandemic—to compete with an industry movement that couldn’t be ignored any longer. But Hooters was always listening. And what better way is there to compete with fast casuals than to create one? Hooters answered that question with Hoots Wings, established in Chicago four years ago.

“Why not do a fast-casual version of ourselves and just take our best-selling, most popular items, and make that the menu,” says Sal Melilli, CEO of Hooters of America. “And really that became the foundation of what was the early thinking behind what became Hoots Wings.”

The concept has since grown to seven locations across Illinois, Georgia, and Florida. Melilli says when everything was locked down in the early weeks of the pandemic, sales were tight. But Hoots Wings responded quickly because of its fast-casual model that emphasized off-premises. Currently, about 80 percent of sales come outside the four walls.

The young brand performed so well that it opened three units during the pandemic. The growth isn’t done either. Hoots Wings recently announced its first franchise opportunity, with plans to open 17 stores in 2021, 35 in 2022, and 50 in 2023. The emerging chain is targeting markets in the Southeast, Midwest, and Northeast.

“We're highly confident that we will come out of this,” Melilli says. “We're also highly confident that good operators are making bets and investments today that are going to be successful in the future. And a lot of multi-unit operators that are already very successful that have great experience, that are well-capitalized, this becomes a natural add-on to put into their portfolio. Maybe they're a pizza operator. Maybe they’re a burger operator. Maybe they’re a Mexican operator. Putting a chicken wing concept in there is a nice complement to their portfolio.”

Hoots Wings spent the past few years preparing for this stage by perfecting its business model. Stores use a small amount of high-quality ingredients to manage inventory, and kitchens use just two pieces of primary cooking equipment to ease production. Hoots Wings is also partnered with third-party delivery platforms like Uber Eats and Grubhub, and units include a designated area for takeout orders to reduce friction.

The simplicity of operations becomes even more impressive considering the menu diversity. 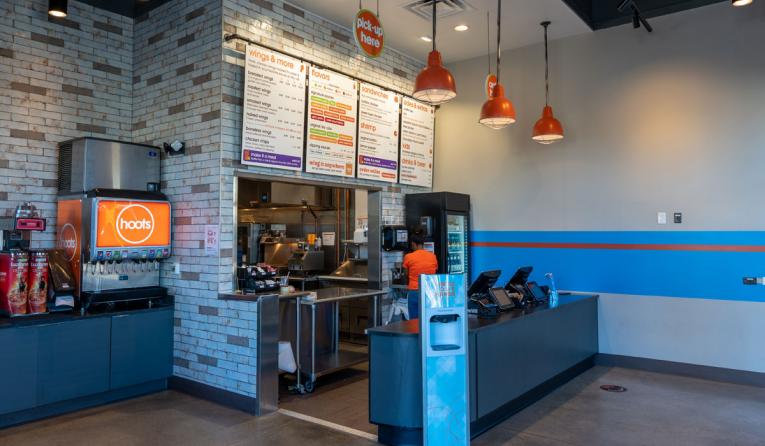 The relationship between Hoots Wings and Hooters is very much like a younger brother/older brother dynamic.

“I relate back to our experience. Because we've been in this sector and specifically wings for so long, we’re able to bring all that experience forward,” Melilli says. “We have two simple platforms. A fryer or a combi oven. And yet they can generate and make all those different products and all those different combinations. So again, it's a very compelling differential between what everybody else is doing and what we've managed to do by relying on that experience.”

To Melilli’s point, Hooters has been in the wings game since 1983 and has grown to more than 400 stores across the country. In that time, the brand has carved a space for itself in the national consciousness, which has become key as of late given the rise of wing concepts, both brick and mortar and virtually.

In 2019, Americans ate nearly one billion servings of wings, according to the NPD Group. The growth is especially present in the sit-down segment because of its portability. Chili’s, Lazy Dog, Smokey Bones, and Chuck E. Cheese have each launched their own spin on wings in the past year. Black Box Intelligence reported that for full-service restaurants, wings received the largest number of positive guest mentions, behind only steak.

Despite a growing number of players, Melilli isn’t worried about the message of Hoots Wings—or Hooters, for that matter—getting drowned out by the noise.

“I think a good piece of it is the wing category, but the much larger piece of it is the credibility in our experience in the space,” says Melilli, pointing to what’s made Hoots Wings successful during COVID. “There's a lot of people that are cooking chicken wings or dropping chicken in a fryer, but no one has the variety that we have. So most people have just plain wings or naked wings. We have breaded, we have smoked, we have roasted, with all the different combinations of sauces and rubs that we've been doing for decades. It's sort of infinite options. On top of that, we have a phenomenal chicken sandwich that you can also customize and have any way you want with any of the sauces, and then a really unique, spectacular buffalo shrimp product.”

The relationship between Hoots Wings and Hooters is very much like a younger brother/older brother dynamic, the CEO explains. Melilli says that in order for Hoots Wings to become a 100-unit chain in the next three years, the restaurant not only has to rely on experienced franchisees, but also the strength of the Hooters brand. He laments the way COVID has decimated the industry, but the nature of the crisis has led to a boosted profile for Hoots Wings.

Another way to put it is, the little brother is about to have a major growth spurt.

“We've been able to gain a lot of trial, and then having the brand recognition and the credibility with our experience for the wings, helps drive that,” Melilli says. “We’re optimistic that once consumers try the product, the hardest problem that a consumer is going to have is deciding what they want with all the infinite choices that we have in terms of the ability to mix and match. So many wing combinations with so many sauces—that will give them multiple opportunities to keep coming back until they can find their favorite.”