How A&W Took Control of its Own Destiny Again

It's been 10 years since the iconic brand placed its future in the hands of franchisees. And it hasn't looked back since.

Web Exclusives | December 22, 2021 | Danny Klein
A&W
A&W's root beer is core to who the brand is, and franchisees understood that.

Kevin Bazner had an agreement to join another brand on his desk when the phone rang. It was Dale Mulder, an A&W lifer who had been with the chain since the early 1960s, and is credited as the first restaurant owner to put a bacon cheeseburger on the menu some 58 years ago.

“He said, ‘well, you haven’t sign anything, have you?” Bazner says.

Mulder, now A&W’s chairman, was about to join a core group of franchisees and buy the iconic restaurant back from Yum! Brands. The Taco Bell, KFC, Pizza Hut, and Habit Burger owner acquired A&W, along with Long John Silver’s, in 2002.

Kevin Klein, chairman of the National A&W Franchisee Association, says the brand got “kind of lost there” operating under one of the largest umbrellas in quick service. Perhaps most notably, A&W’s growth had redirected toward co-brands—a path that turned a lot of operators into “a slave to both brands,” he says. Generally, co-brands end up leaning one concept over another, and in A&W’s case, running alongside Yum!’s chains seemed to favor whoever else was sharing the space, whether it was KFC or Long John Silver’s. “We were kind of second fiddle in those things and lost some control,” Klein says.

It’s not to say Yum! didn’t aid A&W in some respects. The company brought stability to its menu, for one, and reeled in add-ons that had bloated across stores.

Yet the broader implications threatened something far more lasting—A&W’s core equities. Scalable changes, like bag-in-the-box root beer, brought into stores, put into the mix machines, and dispensed like everything else, alongside everything else, drifted the brand further and further from its peak, which, in the late 1960s, had numbered as many as 2,400 restaurants. Roughly 70 percent of the system adopted this approach, and, again, co-brands represented the majority of the concept’s expansion.

Franchisees wanted to put both hands on the reins again, Klein says. But he’s not sure they would have even tried if Bazner wasn’t willing.

Bazner first joined A&W in 1985, working in corporate operations. Three years later, he assumed control of the company’s international arm and became president and COO from 2000–2003. During his time away, he was a franchising consultant, investor, and ultimately, president and COO of Smoothie King.

Mulder’s call in 2011, though, jogged Bazner’s memories. “The short answer is, I never gave it a second thought,” Bazner says. “I was like, yes. This is the right thing for me. It feels good. Working with people you know and like and having a trusting relationship with over the years.”

“And at a point and time in my career when I was asking myself what’s going to be my last mark, if you may, in the industry, it just felt right that it would be A&W,” he adds.

December 19 marked 10 years since A&W’s franchisees closed the deal, and it’s still the only major restaurant brand 100 percent owned by its operators.

Klein, who was actually hired by Bazner—then a district manager—in 1985, calls those early stages a “whirlwind time.” A&W had a national convention coming up in January and, while they were happy to have the brand back, nobody had a blueprint for whether or not this would work.

Let’s turn the calendar forward. A&W’s same-store sales have increased every year since, reversing seven years of declines. Comps are up 10.2 percent in 2021, following last year’s 9.2 percent growth. Average-unit volumes climbed nearly 50 percent in that 10-year stretch and close to 70 new restaurants opened, with more than 20 in development.

Bazner says A&W is in positon to achieve yearly growth, in terms of unit count for its base-brand business, for the “first time in decades” this coming year. Ever since acquiring A&W, the departure from co-brands and toward A&W-centric venues, especially drive-thrus, dragged the overall unit count down. It was a necessary step, Bazner says, to tighten what had become a misrepresentation of A&W when A&W was at its best.

In the past three years, the chain’s co-brand footprint has declined by a net of 69 locations. And that side of the business won’t grow again.

“However, in 2022, we will be positive store count for our core base-brand business,” Bazner reiterates. “And I expect that given the pipeline we have, the interest we have in the brand, for that to continue.”

It’s what Bazner believes will define the next decade for A&W—measured, replicable, annual growth in terms of store counts of that core A&W concept. Minus a few exceptions, we’re talking freestanding or travel plaza stores, with drive-thrus and seating.

“The 50 percent same-store sales growth that we’ve seen in average-unit volumes over 10 years puts us in the decision set when franchisee prospects are looking around the industry in terms of where is an opportunity,” Bazner says. “Our financials have gotten the point, the ROI has gotten to the point, where we’re getting people’s attention. We’re in the discussion.”

Interest among prospective franchisees is also at the highest level since 2011, the company says. 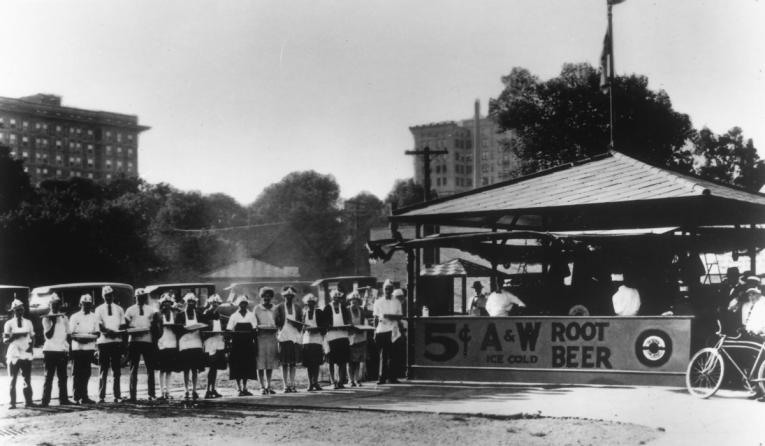 The top quartile of freestanding A&W’s with a drive-thru reported average net sales of $1.574 million last year (the total average was $1.1 million). A&W posted U.S. systemwide sales of $235 million and finished the calendar with 541 total units—a 31-store decline, year-over-year (co-brands factored in). There are also about 400 locations overseas, and plenty of growth opportunities, Bazner says.

So what rerouted one of the country’s most recognizable brands? It wasn’t just stepping away from co-brands and Yum!’s ownership.

That first year, A&W engaged outside help to poll consumers within a 3–5 radius of its single-brand stores. Meanwhile, Bazner and Paul Martino, the brand’s president and COO, traveled across America and even overseas to take the pulse of franchisees. Mulder tagged along for some as well.

Bazner estimates they hit 80 percent of the system within two years. Two things became clear and they intertwined in many ways—among franchisees, there was a sense of apathy, Bazner says. For consumers, A&W had slid into a blurry middle ground. It wasn’t McDonald’s and it wasn’t Five Guys, either.

“And we unanimously said, we’ve got to go one way or the other,” Bazner says.

Given the fact A&W is not on every street corner, competing on price was going to feel like scaling Everest, he adds. A&W didn’t have the share of voice. And, guests already perceived the brand as having higher prices and higher quality. “So we said, ‘let’s give them more of both,” Bazner says.

Additionally, much of that apathy stemmed from A&W’s identity starting to slip.

Root beer has been the bulk of its business over the company’s entire history (the chain started as a root beer stand in 1919 in Lodi, California). Root beer outsells every other drink 3:1 at A&W. Of course, there isn’t another quick-serve in the world who can mirror that.

The entire system went back to making it in-house with the ownership flip. “It’s time consuming, it’s very labor consumer, but it’s worth it,” Klein says.

Leadership received very little kickback, he adds. The board put incentives behind the mixers it uses (operators are literally making simple syrup). Restaurants take 12 gallons of water, 120 pounds of sugar, and stir it. Now, there are smaller batches. Either way, A&W offered rebate money behind auto mixers and enticed operators to order the equipment, which Klein says, some 95 percent did. The others were still mixing by hand.

No preservatives. No shortcuts. Served in a frosted glass and dispensed by a draft arm (in select locations).

None of that, no matter how you spin it, suggests a brand that competes at the bottom of the price ladder.

From day one and throughout this 10-year stretch, A&W’s focus has been “quality is our value proposition, not price,” Bazner says.

One of the first proclamations he made at that first January convention was A&W had zero intentions to develop a dollar menu. They’d still offer daily specials, coupons, etc., on the local level, but, nationally, A&W was going to center its strategy on quality and differentiated products at a fair price. “And rebuild the business that way,” he says.

“The coupon clippers, whether it’s physical or digital these days, are not the most loyal customers,” Bazner adds. “They’re loyal to the deal.”

This has turned out to be a fortuitous call. With inflation pressing the price ceiling across the sector today, A&W finds itself in a position of strength. Brands that court guests who define value in other ways, like Starbucks for instance, tend to have more pricing power. There isn’t as much risk pricing out a core base, like there would be at a chain that deep discounts to drive traffic.

At this point, Bazner says, A&W’s customer understands the proposition. “Frankly, in the last two years, we’ve had an opportunity to take price through the quality we’ve been providing that we weren’t able to before,” he says.

And it all comes back to ownership. A&W doesn’t host quarterly earnings calls or answer to private equity. Decisions run through a long-term filter. “There’s no POS system, there’s no marketing campaign [to provide a short-term fix],” Bazner says. “It’s a long-term thing, always. And, fortunately with the shareholder structure, we’ve been able to do that.”

Those were Bazner’s marching orders from the outset. Because franchisees own A&W, everything is about protecting the company’s interests.

Klein says “90 percent-plus” of operators didn’t want to grow the way Yum! was taking A&W (co-brands). Also, one of the realities of being involved with such a large franchise company was some operators felt unattended to, he adds. Namely single-unit ones.

Bazner’s team quickly put people into the field to let owners “know we were back in town,” Klein says. The company got the message across. And when January’s convention arrived, franchisees recognized the hands-on nature of A&W’s organization had returned.

Those ties have only gotten closer over the years, Klein says. There are multi-generational franchisees and board members dotted across the brand. They leaned on this support during COVID, when Bazner and other leaders hosted constant webinars to walk franchisees through what to do next, from PPP funding to safety measures.

The long-term vision Bazner referenced hangs over A&W at all times, Klein adds. And that’s a good notion. There’s no interest in selling the company or chasing large growth targets. Of the stores built since the acquisition, Klein says, only “one or two” have gone by the wayside. “Otherwise, these things are all financially feasible. They’re all successful restaurants,” he says. “And knowing that helps us to move forward, knowing that we do have a successful model.”

“We’d like to be building faster,” Klein continues. “But we’re not out there signing 30- and 50-store deals to people who may have the money, but not the operational background to run it. We want to make sure everyone we put in business will be successful.”

A&W’s decade-long journey as a franchise-owned group has inspired a family feel throughout the system. It’s a collection of operators that’s emerged from the wringer, Klein says. Back in 2012, The Atlantic published an article on 10 companies it felt were approaching their expiration date. A&W was No. 9. Bazner admits The Atlantic wasn’t that far off at the time. But they sure didn’t turn out to be right.

“Our franchisees are some real tough people,” Klein says. “And we continue to prove that.”