How Bojangles Uses Sports to Amplify its Marketing Power

With customers eager for more face-to-face interactions, the chicken chain launched its first Tailgate Tour, full of celebrity appearances, giveaways, and more at some of biggest college football games of the season.

Bojangles has been a tailgate brand for decades, and there are specific reasons for that reputation, says CMO Jackie Woodward.

Firstly, the customer base loves sports, and with restaurants mostly in the Southeast, they particularly love college football. Woodward calls it “king of the weekend” during the fall. Secondly, Bojangles’ menu is a natural fit for feeding a tailgate crowd with Bo Boxes of eight, 12, and 20 pieces of chicken and fixings. COVID took that strength away in the past couple of years, but now people are craving face-to-face interactions.

Views into the consumer base are starting to look a lot like 2019, Woodward says.

“I would say people are ready to be with one another again, and so we have been bombarded at each one of our tailgate activations, and it's not just the number of people,” the CMO says. “What's been very interesting for us is just how happy people are. How much it means to them to be able to be with their friends, enjoy our food, have some fun, playing catch or cornhole, dance to some music. So there's just a level of enthusiasm and energy and happiness of being able to be with one another again. Humans are a race that needs each other and that is certainly showing up in spades at our tailgates.”

With Bojangles sensing a building urge to socialize, the company ramped up its efforts with a multi-pillar plan. It started with the first-ever Tailgate Tour, which featured parties full of games, celebrities, and giveaways at some of the biggest college football matchups of the season. Notable games include N.C. State versus Clemson, Auburn versus Georgia, and Alabama versus Tennessee. Alongside this tour, Bojangles brought back its college and NFL-themed Bo Boxes, honoring a years-long tradition. Teams with their own Bo Box this year were Clemson, Coastal Carolina, East Carolina, East Tennessee State, James Madison, N.C. A&T, Georgia, South Carolina, Western Carolina, and Tennessee.

Woodward says choosing which games to attend was more art than science. Bojangles selected universities where it has an existing partnership, so it could take advantage of more activation touch points. The ability to amplify the partnership and leverage NIL athletes at the school was more logical than showing up to tailgates gratuitously, Woodward says. The next measuring stick was based on popularity of the game. The final tailgate occurred November 19 when Bojangles traveled to Columbia, South Carolina, for highly ranked Tennessee versus South Carolina. The game was attended by nearly 80,000 people. Also, N.C. A&T’s matchup against Campbell held more significance because it landed on homecoming, an event the university calls “The Greatest Homecoming on Earth.”

Within that strategy, there was room to pivot. Entering the season, Bojangles didn’t have any plans to visit Appalachian State in Boone, North Carolina, but then the football team knocked off Texas A&M in surprising fashion. The next week, ESPN’s highly watched pregame show, College Game Day, decided to visit the campus in September. Upon hearing the news, Bojangles switched gears in four days and traveled to Boone as well to take advantage of the excitement. 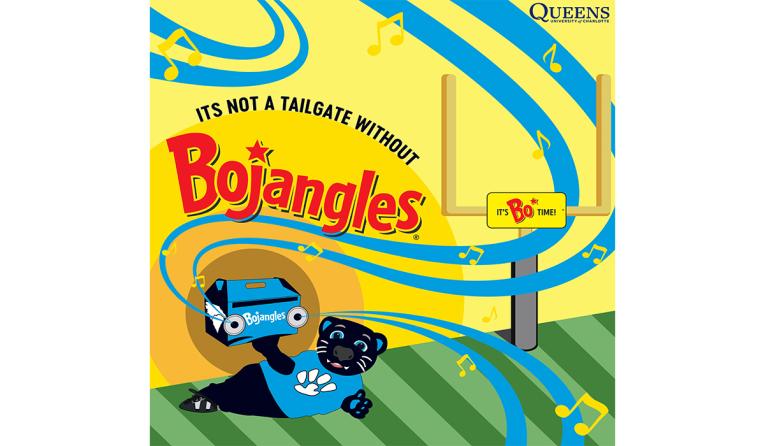 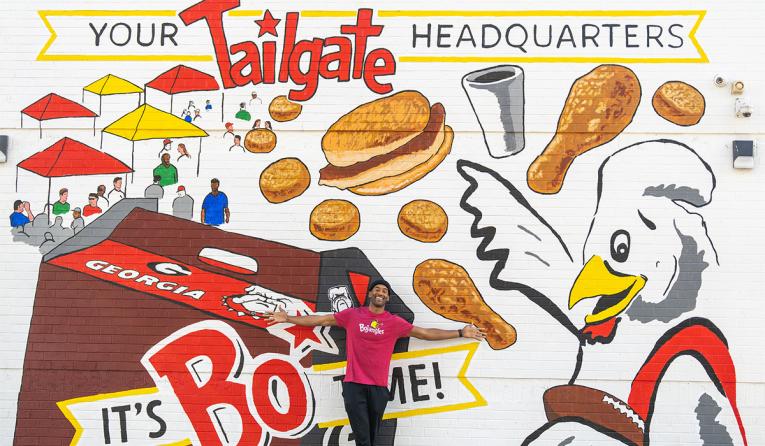 Artwork from students at the University of Georgia. 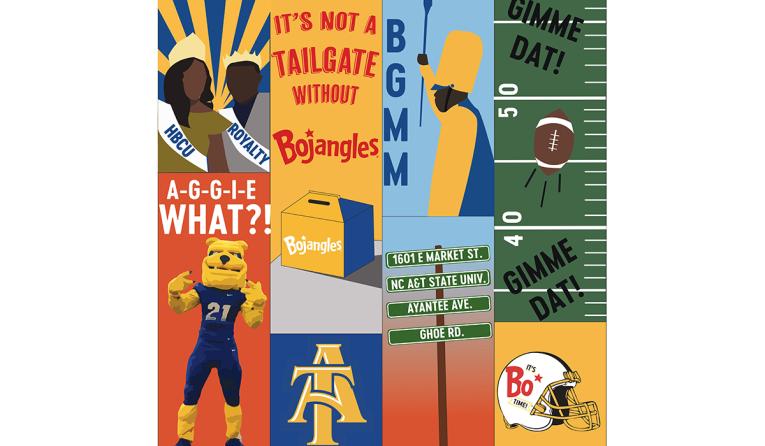 A mural commissioned at a Bojangles near the campus of N.C. A&T.

“We've built our team over the last few years to be nimble and agile,” Woodward says. “First of all, we've all had to be nimble and agile and be able to pivot quickly over the last two-and-a-half years. So we built that muscle and now we get to use that muscle for things that will make our customers happy and make them excited about being out and buying chicken biscuits and tea at Bojangles again. It’s in our DNA. We're a flexible, agile team, and I have to say we're a team that loves sports too. So we pay attention.”

Another pillar of Bojangles’ plan was to continue cementing NIL deals. The chicken chain was one of the first major quick-service brands to ink these agreements last summer when the option first became available. Woodward says many have asked how much research and thought are put into these decisions, and the executive tells everyone that it’s never difficult. Instead of only going for the high-profile stars, the company watches out for athletes who grew up on its food and are familiar with the branding. As part of these NIL deals, individuals become influencers for their audiences, and Bojangles prefers that connection to be authentic. Diversity is crucial too. The roster features women’s and men’s basketball players and football players, but not just from popular schools. HBCU students are part of the team, like JR Smith, a former professional basketball player who’s now on the golf team at N.C. A&T.

Bojangles also tapped into game day culture by commissioning football-themed murals at restaurants near four schools—Georgia, N.C. A&T, Clemson, and South Carolina—and in Charlotte for the Carolina Panthers. The murals were painted by students, which Woodward sees as another point of building connections and authenticity. The art showcases to all customers just how much Bojangles is deeply embedded in college culture.

And to increase its reach even further—especially with younger audiences—the company collaborated with Barstool Sports podcast Bussin’ with the Boys. The sponsorship comprised of co-branded sets at college football games, introducing some Barstool fans to Bojangles for the first time.

Woodward says marketing is about meeting customers where they are, hence the investment in tailgating season. Recently much of Bojangles’ attention has been pushed toward digital, with the rise of off-premises consumption. However, She adds TV remains a significant vehicle to reach customers.

Bojangles has ongoing plans to expand itself into markets like Texas, New Jersey, Ohio, Baltimore, and Washington, D.C., but at its core, the brand carries 45 years of history as a North Carolina and Southeastern staple, and the chain won’t stop leveraging against that cultural relevancy.

“Our food is so unique and so different. So flavorful,” Woodward says. “We don't serve just plain old hash browns for breakfast. we serve Bo-Tato Rounds with a lot of flavor. And so amping up the food credentials of this brand pays off for us, and I think that's what creates the curiosity and the interest and the eventually the passion that has carried us through for so many years.”