The chain has avoided cutting employee hours and reducing its workforce.

The purpose of P. Terry’s Burger Stand is not only to serve quality food, but also to provide a home for employees despite all the chaos in the world, CEO Todd Coerver says.

The Terry family leads with their heart, he explains, and social responsibility is a significant priority. For people unaware of this, an increase to a $15 minimum wage during a pandemic—especially for a 20-unit brand—may seem like a head-scratching decision. But to the people in the know, the move is completely in line with the culture that the Terry’s have built over the past 16 years.

Coerver and the Terry family recognize all the changes and mandates employees have been forced to handle. They’ve also seen workers power through and keep the business alive. At this point, a $15 minimum wage appeared to be the least they could do, Coerver says.

“That's really what made Patrick Terry, our founder, and myself take notice and understand,” he says. “Like, my God, these people are the backbone of this business. We don't do it without them. I think it deepened our appreciation for our crew members, which in turn, inspired moving more quickly on getting to a higher minimum wage.”

Effective January 1, P. Terry’s minimum wage grew to $15 per hour, up from roughly $12 per hour—a 25 percent increase on average. In Texas, where all the stores are based, the minimum wage is $7.25 per hour, which is also the federal minimum.

It was about a six-month process to get from ideation to implementation because of the logistical planning and financial modeling required to accommodate the increase. P. Terry’s began by determining how much the company was going to take on versus how much the brand would pass along to customers. It was quite the balancing act because P. Terry’s model is value-driven, Coerver notes. The menu pricing is competitive and not much different than say McDonald’s or Burger King.

Keeping that in mind, the chain landed on a 2.5 percent increase on menuboard pricing, which equated to about a 10-cent rise on each burger and a 5-cent increase on fries and drinks. At the end of September, P. Terry’s rolled out the price increase to gauge what the response would be from consumers. The chain let it go for about 45 days, and then around mid-November, it checked in to see if there was much reaction. The company found little to no pushback.

“We thought that was a fairly modest ask of our guests, while keeping our value proposition very much intact to help share that burden to make sure our folks were getting a respectable, livable wage, especially in Austin, one of the more expensive cities in the United States right now,” Coerver says.

The menu pricing offset half of the minimum wage increase. The other half came out of company profits.

“It was important to [the Terry family] to turn around and put that back into ensuring our employees got that livable wage,” Coerver says.

The $15 minimum wage discussion has gained national attention because of its original inclusion in President Joe Biden’s $1.9 trillion American Rescue Plan. One of the main purported effects is an increase in unemployment and the eventual replacement of human capital with artificial intelligence.

Coerver and P. Terry’s view this argument as “lame excuses.” The CEO says the brand has no intention of replacing or lessening its workforce. If anything, the chain is seeing positive side effects. For example, Coerver notes high-quality employees—from some of the best-in-class competitors—have been banging on P. Terry’s door wanting a job. 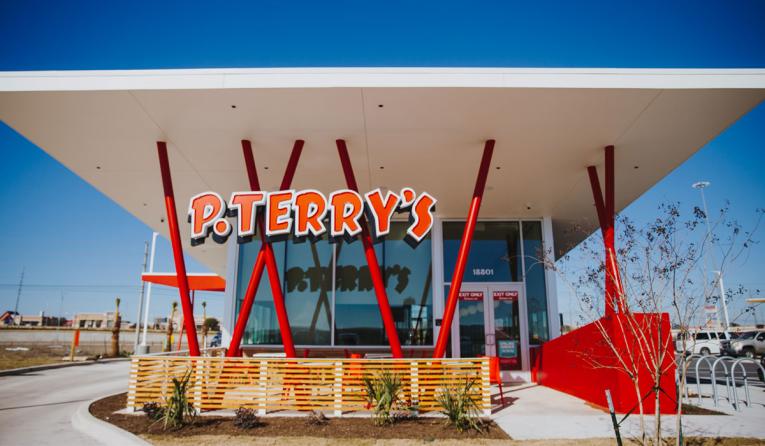 “For the first time, we were seeing some of their people migrate over to us saying, ‘Hey, we heard what you guys are doing, and we want to be a part of it,’” Coerver says.  “We are raising the bar on the talent and skill level that is working for P. Terry's. And that should obviously have a benefit to the guest, as well, but through a more consistent and improved experience. So for us, this just makes sense on several levels.”

Coerver recalls seeing people on social media respond to P. Terry’s minimum wage increase with claims the restaurant will cut people’s hours. But the chain is actually experiencing more of its part-time workforce move into full-time hourly employment because they want the $15 per hour. P. Terry’s encourages that because when a majority of employees are part-time, the restaurant’s scheduling is challenged by workers needing time for school, a second job, or other matters. More full-time employees result in a dependable, reliable workforce, Coerver says.

The pay raise doesn’t mean P. Terry’s is leaving out the more highly compensated workers either. Lifting the floor for all full-time employees was just the first step. The burger chain is now in the midst of improving the next pay level because leadership knows there should be separation. It’s just that the company couldn’t do an increase throughout the workforce overnight.

"Once we had that conversation with everyone, they understood,” Coerver says. “And we said, ‘Don't worry, we're going to get to you, but the company needs to also be fiscally responsible in how we make this move, so we can all continue to enjoy our jobs.’ And so, once we had that very transparent conversation with them, they understood, and we just asked for their patience.”

Opponents have also suggested that a higher minimum wage would bar unskilled labor, such as teenagers, from gaining employment. But Coerver describes this as another “empty excuse for not doing the right thing.” To him, the beauty of the restaurant industry is that it’s open to anybody that comes in with hustle, a solid work ethic, and a great attitude. If someone supplies each of those characteristics, the CEO says P. Terry’s will train the other skills.

“It sounds really hard and bad at first,” Coerver says. “And then once you start going down that path, you realize it's not that hard. And it's not that bad. Sometimes these moves force a good level of creativity and innovation where you'll find a way to do the right thing.”

Coerver adds some positive-minded, hospitality-driven teenagers are better than a lot of the older adults in the industry.

“People keep trying to find a smoking gun here,” Coerver says. “We’re going to either jack up prices or we're going to reduce people's hours or reduce workforce or go automated. And I just think it's people not coming to terms with the fact that this is the right thing to do, and you need to figure out how to do it.”

The federal minimum wage hasn’t changed since 2009. Biden’s COVID plan would’ve changed that, but the Senate parliamentarian ruled the $15 minimum wage provision couldn’t be included because it didn’t meet the standards of budget reconciliation. Democrats have warned the fight isn’t over, but a tough battle is ahead. All Republicans and more than a half-dozen Democrats aren’t in favor of the idea, which is not nearly enough to pass the Senate.

Coerver isn’t sure a federal increase of that magnitude is the right way to go. He feels it’s more appropriate to raise the minimum wage at the state level since cost of living varies so much. It can work if done properly, he says. Prior to coming to P. Terry’s, Coerver was the CEO of Larkburger, a small burger concept in Colorado, a state that’s continually raised its minimum wage. In 2016, Colorado voters amended the state constitution to increase the minimum wage from $8.31 to $9.30 starting January 1, 2017, and to increase it annually by 90 cents until it reached $12 on January 1, 2020. Each year after, the minimum wage will be adjusted annually for cost of living increases.

“It sounds really hard and bad at first,” he says. “And then once you start going down that path, you realize it's not that hard. And it's not that bad. Sometimes these moves force a good level of creativity and innovation where you'll find a way to do the right thing.”

Coerver says P. Terry’s is not on a soapbox saying, “Well, we did it. Why aren’t you doing it?” That’s not the crux of the conversation. P. Terry’s is aware that it’s in a better position than most. The chain has weathered the pandemic quite well and it’s also family-owned, meaning the brand isn’t subjected to outside pressures from a board or shareholders.

The restaurant also knows that a 25 percent increase isn’t the right way for everyone to do it. The point is that it worked for P. Terry’s, and that other chains must find what process works for them. Coerver isn’t here to judge—he just asks that restaurants stop fighting it and figure out how to game plan for it. If that means taking a 50 cent increase over the next several years, so be it.

“At least start moving in the right direction because Texas’ $7.25 as a minimum wage is flat out inhumane at this point,” Coerver says. “And it's silly that we're still having this conversation as an industry in this state, and so just figure out what you can do and put a strategy and a game plan in place that’s on a timeline that works for you and your business. There's nothing magical about $15 an hour. I think it's more symbolic of it's well overdue that it's time for a change on this front.”

Coerver says other CEOs, owners, and founders he’s talked to in Austin have applauded the brand for its minimum wage increase. They’ve asked for insight on how to do it because they want to do better by their people, as well.

And that’s essentially the biggest goal P. Terry’s had in mind—to show similarly sized companies that they don’t have to be a mega chain to afford it.

“We're a small, emerging regional brand, and we figured out how to do it,” Coerver says. “We hope that encourages others to figure out their version of how to do this. We're not saying do it the way we did it, but at least like I said earlier, start game planning for it because it's the right thing to do.”