How a Midwest Pizza Company is Beating the Labor Shortage

When general manager Jeannie Radtke first heard Happy Joe’s Pizza CEO Tom Sacco offer her a franchise location, she thought he was joking. Then, she broke down.

The 46-unit pizza chain hopes the move will foster long-term retention as the restaurant industry braves a labor shortage coined by many as, “The Great Resignation.” Food and drink establishments gained just 29,000 jobs in September, leaving them a million jobs short of pre-COVID levels. And at least one in four people quit their job this year, according to data from the people analytics firm Visier.

Sacco said Happy Joe’s Operator to Owner program took shape after he observed so many tenured employees show potential for ownership. The first manager the company intended to choose was Bob Plum, a 16-year Happy Joe’s leader in Kewanee, Illinois. But when, a few months ago, he unexpectedly died of a heart attack on his day off, Happy Joe’s had to take a step back. It didn’t feel right to provide accolades for another manager right away after such a tragedy, Sacco says.​​

In August, Sacco began discussions of bringing Radtke onboard as the first manager who would make the transition into owner via the program. Radtke and her fiancée, Adam Clark, another Happy Joe’s employee, are now the owners of the Maquoketa, Iowa, unit. Radtke has worked at Happy Joe’s since 2012 and was promoted to general manager in 2019.

“It has always been a dream of ours to open our own restaurant,” Radtke says. “When Tom proposed the idea of me becoming a franchise owner, I left the conversation in tears. I am still in shock at the incredible opportunity and am the utmost grateful that this was something Tom would make happen for me. I am thankful for the opportunity and for the support from our corporate office and my peers at Happy Joe's.”

To qualify for the program, Happy Joe’s evaluates the quality of the location’s operations, the level of general manager’s involvement in the community, and their leadership impact on the restaurant in addition to sales growth and profitability improvement over at least a three-year period. It goes far deeper than pure sales to distinguish a manager from the pack, Sacco says. It’s something intangible that comes down to their core as a community member.

Ultimately, you can teach someone how to make a good pizza and even how to run a restaurant and make money, but you can’t teach the values they bring along themselves, he adds.

Radtke fit that bill, often uplifting the community around her in the 5,000-person town. She donated pizzas to healthcare workers. During her tenure, she also more than doubled sales at her Happy Joe’s unit.

“She’s operated it like it's her own individual business and has put that kind of love and passion into the business and has always led with a servant's heart,” Sacco says. “That's why she sees the results that she's been seeing.”

Walking by Radtke’s restaurant, guests would always see a variety of flowers drawing them in, even in the often frigid temperatures of the Midwest, Sacco says.

“When you drive by the restaurant, and it's a nice day, and you see these bright flowers, it just puts a smile on your face,” Sacco says. “It warms your heart to see that.”

The response after the company announced Radtke would become an owner was significant, Sacco says. Within 30 minutes, a rush of congratulatory notes came in, and three or four days after, she was still getting flowers sent to the restaurant from other managers. They rallied around Radtke’s selection.

To be clear, it isn’t exactly a gift to managers, Sacco says. The stores are sold to them for a very low book value, but it provides an opportunity many would never be able to have otherwise. 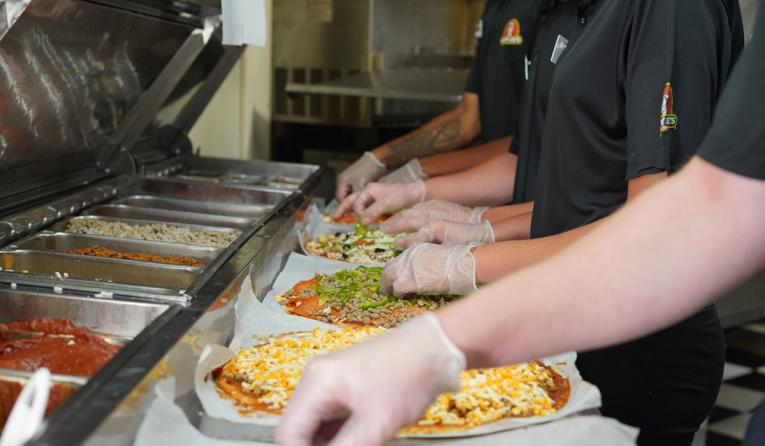 “My recommendation is, dial into who your staff are and then recognize them for the effort of excellence that they provide you in your business,” Sacco says.

The Operator to Owner program will award managers on a case-by-case basis. The major drive is to retain quality staff while encouraging employee success. But it’s also a way to give the company reasons to build new restaurants, Sacco says.

The restaurant world looks vastly different today than even two years ago, Sacco says. It’s become significantly harder to keep good people. And amid all the sign-on bonuses and wage hikes to attract employees elsewhere, Happy Joe’s is looking to keep talent in place.

“This is another way to reward really good managers,” Sacco says. “In our business, that's important because we cater to families. Our whole mission is to create this dynamic where we sprinkle fairy dust on these families. When they come to Happy Joe's, we create magical memories for these children. It takes a special kind of leader in our restaurants to do that.”

There aren’t many other concepts that can fulfill the diverse range of menu offerings: breakfast pizzas, dessert pizzas, and even holiday pizzas are coming soon. Perhaps most uniquely, Happy Joe’s carved out a historic spot in many customers’ minds as the iconic place for children’s birthday parties.

“When you're six and you're eight and you're 10, that sensory overload creates a really ingrained memory, so when you become 40, you still remember that,” Sacco says.

Grandparents come up to Sacco, telling him of their memories of taking their kids there, and now they’re here again for their grandkids. Happy Joe’s is a nearly 50-year-old company. And being in many small towns across the heartland of America, Happy Joe’s caters to everyday people who seek out childhood memories from the brand. Because Happy Joe’s plays such a role in many customers’ lives, they can’t lose managers like Radtke, Sacco says.

“So you get creative. You come up with things,” Sacco says.

“What can we do to reward the best that we have? Then it becomes an incentive for the others maybe to step up their game and see, ‘wow, I can become a franchise, I can become an owner also,’” he adds.

All of this is not to say Happy Joe’s hasn’t faced its own struggles over the last few months finding and keeping employees.

“I would have thought maybe it would have been different here in the heartland of the country, but it's not,” Sacco says. “It's a very, very difficult employment market.”

About 10 months ago, Sacco decided to take a different approach to Happy Joe’s labor problems. He realized that perhaps they didn’t have an employment hiring problem, but instead, retention was the key piece they needed to work on.

“I said, I really think we have a retention problem,” Sacco says. “If we did a better job of retaining our staff and management, we would be less stressed to replace them. So that became the driving force.”

Restaurant by restaurant, Happy Joe’s made adjustments to salaries and hourly wages. But Happy Joe’s also interviewed more than 100 employees across the country to find out what was most important to them. Some of the things Sacco heard jumped out.

Some things were simple fixes that could go a long way. For instance, front-of-the house staff felt the visors they had to wear were outdated. Sacco agreed. He hadn’t worn a visor in 10 or 15 years.

Compensation was No. 3 on the list of what employees hoped to improve, but second, surprisingly enough, was something else that could be remedied in a hurry. Staff wanted to be able to wear blue jeans.

“When they saw us respond, it helped from that standpoint of ‘the company does care what we say. They are interested in what we think because look what they're doing. They're making changes just based on our recommendations,’” Sacco says.

Happy Joe’s also went back to its prior tradition of recognizing birthdays and milestone anniversaries of employees within the company. These were mostly small things that can still make a world of difference when it comes to how employees view their culture.

Does Happy Joe’s still need more staff? Absolutely, but they’re nowhere near as crippled as they were six months ago, Sacco says. Management used to have to come in from other restaurants just so stores could stay open. With Happy Joe’s new initiatives underway, the company has regained some control.

Sacco advises other restaurateurs to focus on the kind of people they hire and address specific needs.

“My recommendation is, dial into who your staff are and then recognize them for the effort of excellence that they provide you in your business,” Sacco says.

“Don't wait till you have to replace them, and then all you can really do is throw money at it,” he adds. “Do the things that don't cost you a lot of money, they cost you time.”

With a name like “Happy Joe’s,” it’s clear the kind of DNA the brand is built on. The emotional, inspirational environment in stores, Sacco says. Even when franchise owners are a bit more stoic in nature, they know to have an operator that is bubbly and personable with the kids and in throwing birthday parties.

For more than 20 years, Sacco has been a C-level executive, and he knows the power of setting tone and culture at companies. In most of his previous work, he had to turn brands around and jumpstart culture that didn’t exist before. But at Happy Joe’s, it was already there. It was just a matter of being able to take it and refocus it on staff, and what they truly care about.

It goes beyond giving people raises, although that’s important, too. But making people feel special might really be at the core of keeping employees for brands, he says. Or at the least, it might be why things aren’t anywhere near as bad as they could be at Happy Joe’s.

Many of the older staff members have expressed their excitement for the Operator to Owner program’s potential to change their lives, and Sacco even heard interest from some franchisees in implementing a similar program.

The program could prove instrumental in Happy Joe’s growth plans as well.

Happy Joe’s hopes to keep between 10–20 percent of restaurants corporate owned. When the right person comes along, and there are many already in the system who might be a fit already, Happy Joe’s will use them to grow the brand even further.

“It gives me a vehicle that if I see a good opportunity and I've got a good person that has earned the right to go through this recognition process, it gives me the green light to go make the deal on that restaurant.”