How Portillo’s is Redefining Success from the Inside Out

The fast casual has invested millions in employee culture and retention.

Web Exclusives | October 6, 2021 | Danny Klein
Portillo's
Cross-training has been one of Portillo's keys to success in recent months.

Chicago staple Portillo’s could be on the verge of going public. It’s a move that required the 1963-founded chain to pull back the curtain a bit. Security filings didn’t reveal anything Portillo’s hasn’t preached for years, however—that it’s a brand living outside the parameters of what we’ve come to expect in fast casual. Namely, average-unit volumes of $7.9 million and restaurant-level adjusted EBITDA margin of 28.6 percent, both tops across the entire sector, according to The NPD Group.

Stores in Chicagoland averaged $9.1 million on adjusted EBITDA margins of 32 percent. Units outside Portillo’s home base were at $5.8 million and the brand is targeting that level (along with margins of 22 percent) for new builds by their third year of operation, with cash-on-cash returns of 25 percent. It’s an AUV higher than any of the top-50 grossing quick-serves in the country last year, including Chick-fil-A.

Portillo’s, which had 67 restaurants across nine states as of June 27, generated drive-thru sales of $4.9 million in that 12-month lead-up, more than double the throughput of McDonald’s 2019 average drive-thru and triple the burger chain’s 2020 and trailing Q2 12-month period (nearly all of Portillo’s restaurants are built with double-lane setups and sizable parking areas). The chain also posted dine-in sales of $1.9 million, about 75 percent of Chipotle’s most recent total AUV. Going back to pre-COVID days, the take was $4.4 million.

Portillo’s lunch and dinner dayparts are nearly even as well, with 52 percent of business taking place during the former.

All of this is why Portillo’s believes it can reach 600 stores domestically in the next 25 years—a target that came from data conducted by Forum Analytics last year.

Yet there’s another eye-opening figure at work that hasn’t generated as much buzz: 87. That’s the average number of employees it takes to run a single Portillo’s.

There’s no database to prove this also leads the chain’s peer group, but it sails sector averages by an ocean. The typical quick-serve, per Black Box Intelligence, staffs roughly 23 people.

Jill Waite, the chain’s chief human resources officer, says getting there is worth every effort for Portillo’s. And these days, of course, it’s higher stakes than usual. According to a recent survey from the National Restaurant Association, among restaurant operators not open at the maximum indoor capacity currently allowed by their jurisdiction, 71 percent credited “not enough employees” as the culprit. Nearly 80 percent said they don’t have enough staff to meet current demand and 83 percent claimed their restaurant was 10 percent below necessary levels. Black Box also found similar baselines, with the average number of employees per restaurant down 1.2 in June versus 2019 averages.

Portillo’s, Waite says, has a standard of family and cultural values that aren’t simple to guard, and the company has zero intentions of compromising, labor shortage or not. And it starts with people willing to carry that banner. Portillo’s chose to not lay off or furlough a single employee when COVID hit, instead electing to cross-train additional skills in an effort to increase capacity in off-premises channels. The company provided paid leave, PPE, and created a “Wellness Team” to advise on and monitor the well-being of workers. Additionally, Portillo’s gave 100 percent meal discounts and gift cards throughout COVID and funded bonuses to field managers. If employees wanted to step aside for personal reasons, Portillo’s allowed them to take leave, and still paid out benefits and offered gift cards for free meals. It then launched a foundation called “The Heart of Portillo’s Fund” to help workers with setbacks. Through this, the company raised more than $400,000 over 18 months and awarded about 40 grants for close to $100,000.

That people-first dial has only turned up of late. Portillo’s recently spent $12 million to increase wages and add perks.

“We are pretty much close to being staffed and how we were able to do that is we created a culture of family where we select and we hire people who live the Portillo’s values,” she says. “And what ends up happening is our team members want their friends and their families to work for us, because of the environment and culture that we have created within the restaurant.”

More than 30 percent of Portillo’s workers stem from employee referrals. The program is a combination of a monetary and gift component.

Coming out of COVID’s depths and right into the labor shortage, Portillo’s conducted a total rewards survey to ask employees what they wanted from the brand. Flexible schedules and free shift meals were clear points, Waite says, but perks the brand already offered. Something new to emerge, though, was what Portillo’s calls “premium holiday pay.” Employees who work any of the calendar’s five key holidays currently earn an extra $3 per hour.

The $12 million investment also went toward increasing hourly wages. In Illinois, as one example, Portillo’s employees now start at $14 instead of $11. Tenured team members got an adjustment as well. Crew chiefs were added to the bonus program.

Waite says GMs also suggested Portillo’s beef up recognition. Some asked for $25 or $50 per month to reward hourly employees. “I said, ‘geez, an average of 87 team members, you probably need a little more than $25 or $50,” she says.

Each GM today receives $150 per month to do as they deem fit as part of the “Franks a Lot” initiative. During the recent graduation season, one GM used the money to place signs in the drive-thru lot where every employee who graduated was recognized. 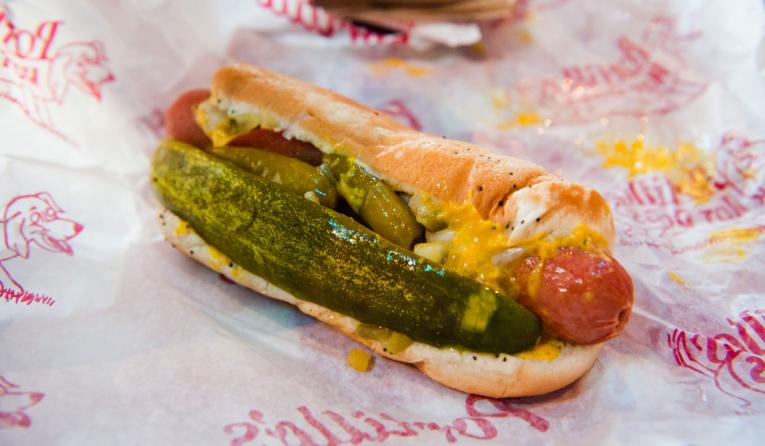 “We look at this in a total rewards approach,” Waite says. “It’s not just base pay, it’s not just bonus: it is pay and benefits, as well as am I able to grow and develop and do I work in a place I’m really passionate about? Do I get to do what I love every single day?”

The broader GM conversation continues to evolve for Portillo’s. Per Black Box, the average cost per terminated GM in 2021 has been $14,689. The median base salary plus bonus in Q2 was $63,878 for quick service. The average bonus earned in 2020 was 20.5 percent of base salary.

Also, half of restaurants surveyed said they were offering GMs flexible schedules in 2021 versus just 31 percent in 2019.

Portillo’s, Waite says, doesn’t stick to norms here, either. GMs in the system can make well over $100,000, she says, between base and bonus. Meanwhile, the company improved benefits packages for GMs, assistant GMs, and restaurant managers where they now receive 18 days of paid-time off (it was two weeks before). The company added short- and long-term disability as well. “We look at this in a total rewards approach,” Waite says. “It’s not just base pay, it’s not just bonus: it is pay and benefits, as well as am I able to grow and develop and do I work in a place I’m really passionate about? Do I get to do what I love every single day?”

About a year ago, Portillo’s really began looking at GM retention, mainly through learning and development programs. The company provides each GM with an individual development plan tailored to their career aspirations. It also started a “multi-unit development program” that included six GMs in the latest go-around. Five of those ended up getting promoted to market manager. “What that did was show our GMs that there is an opportunity to grow here,” Waite says.

Portillo’s targets an 80 percent internal promotion rate—another reason it’s key for the brand to show employees a path to six-figure GM roles and beyond.

On the hourly level, the earlier cross-training point can’t be undervalued, Waite adds. Beyond what it did during COVID, when 80 percent of revenue suddenly flowed from drive-thru and digital, it helps employees keep from burning out. “We try to match team members’ strengths and their passions with where do they want to learn,” she says. “It stops the job from being so monotonous. And then, in addition to that, the culture of family, greatness, energy, and fun—they know they’re not in it alone.”

In marketing materials, Portillo’s put employees front-and-center and tried to get personal. It’s leveraged TikTok, Instagram, Facebook, Snapchat, and other social channels to source talent and meet today’s workers where they are.

Going back to pre-COVID, Waite says, Portillo’s invested in quickening the application process, particularly via mobile, since “the time from application to interview to hire needs to be faster than anybody else” in a tight labor field.

Portillo’s looks to hire culture fits, which Waite says is a better foundation to start, especially when you’re talking about teenagers who don’t have built-out resumes. “When we hire to culture and values, our retention rate and our team member engagement is so much higher,” she says.

The company trained GMs on how to identify these traits. An interview guide tells them what to look for, what kind of follow-ups to ask, and how to glean culture out of questions. Market managers spend time with employees and take stock of how smoothly the process is going.

“It’s a combination between training and development as well as making sure that we’re following up and checking on new hires when they come on board to make sure they really do believe the heart of the Portillo’s,” Waite says, adding the company is actually in a position today where it can turn down workers. It hasn't struggled to staff units on the level of many competitors, despite the overall climate.

"We are in a situation where we want to hire people who meet our culture and are passionate about serving our guests. And that also means turning down any individuals who don’t meet our culture," Waite says. "And even in today’s environment when some are clamoring for individuals, we don’t just want a warm body. We want somebody that is going to really want to be a part of this organization."

The company offers daily pay to workers, too, so they can access funds as needed and not wait two weeks—a direct ask from employees.