How Smokin' Oak is Building its Own Pizza Category

The kitchen uses an oak wood oven that heats up to 900 degrees, cooking pizzas in a couple of minutes. Sauces and dough are made in house, vegetables are hand chopped, and meats—chicken, Italian sausage, chorizo, etc.—are roasted in the oven every morning.

But the food is just one part of the story. The bigger differentiator is Smokin’ Oak’s self-service taproom, which can be filled with anywhere between 25 to 45 selections of beer, wine, and mixed cocktails.

“We've always prided ourselves with setting ourselves apart from the rest of the fast-casual pizza market,” Mongoven says. “So much so that of course we keep in tune with what everyone is doing, but we’re really focused on doing our own thing and doing what we do really, really well, and that—first and foremost—is having fresh ingredients, making great wood-fired pizza, and a great environment with great service.”

Entry into the taproom is simple. Guests go to the cashier, order food, and open a tab with their credit card. Their driver’s license is scanned, and they are given an RFID-enabled bracelet. To get a drink, the customer brings the bracelet against a scanner near a particular tap and can pour anywhere from one to 16 ounces at a time. To prevent overserving, guests’ bracelets stop working after 32 ounces have been poured, and an employee must authorize additional ounces. To checkout, a worker scans the bracelet and prints a receipt showing charges to the credit card on file.

Smokin’ Oak traces its heritage to 2009, with the opening of Pi Wood-Fired Pizza in Rochester, Minnesota. When Mongoven and business partner Linda Black began franchising in 2016, they did so under the name Smokin’ Oak. The idea for a self-pour taproom didn’t come into the picture until around the 2019/2020 timeframe.

Out of the fast casual’s five current locations—Brooksville, Florida; Broomfield, Colorado; Cedar Falls, Iowa; Omaha, Nebraska; and Grand Junction, Colorado—two have the taproom (Florida and Nebraska). However, four more are scheduled to open with the self-service drinks in Austin, Dallas, Fayetteville, Arkansas, and Clifton, Colorado. Two additional units are set to open in Canton, Ohio, and Frisco, Texas.

For the taproom, operators should expect to see return on investment in 12 to 16 months, and average check rise by a few dollars because of customers hanging around longer and ordering more food and drinks. Additionally, alcohol is a high-margin product, and that’s combined with low labor costs. On a busy Friday or Saturday night, there are usually no more than two individuals helping guests with the taproom technology or recommending drinks.

Mongoven recommends franchisees have drafts such as Bud Light and Michelob Ultra, but he also encourages them to embrace the craft beer scene within their respective communities. For instance, in Brooksville, the taproom offers an American pale ale from Tampa Bay Brewing Co. and the Omaha restaurant has a vanilla bean blonde ale from local entity Infusion Brewing Company. 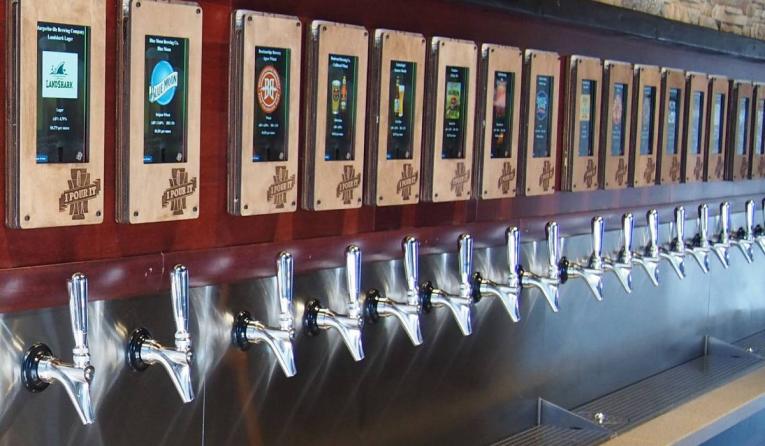 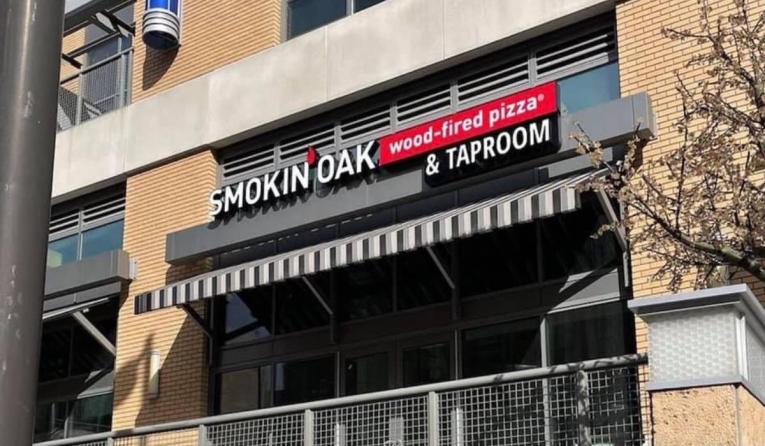 It’s one of multiple models Smokin’ Oak is offering franchisees. The first is the 2,000-square-foot core prototype, which seats 58 customers and features an open kitchen allowing anyone to see employees cook pizzas. These would ideally be endcap locations with space for a patio and parking for curbside pickup.

“I would say more often than not, we don't lead a candidate to opening a taproom. Candidates tend to lead themselves,” Mongoven says. “So they are in the restaurant, they're seeing the taproom during the Discovery Day, they're seeing guests use it while the restaurant is open, and they're seeing the environment that's been created in one of our taproom locations. And they can really see how that can translate to their own community and the potential takeup rate by people living in their markets.”

Smokin’ Oak also launched a mobile pizza truck and a takeout/delivery concept as supplemental opportunities. The off-premises-only restaurant requires 600-800 square feet, and customers would order online via the website, call ahead, or use a third-party delivery platform. The model was created in 2020 when the fast casual saw its business shift dramatically, particularly with delivery.

Mongoven envisions an area developer opening three to four locations in a market, with a couple of taprooms, a core concept store, and a takeout/delivery unit tacked onto the operation.

“I think what we found over the last couple of years is customers want more choice in how they order, and they also have more choice in how their food is delivered to them,” he says. “So in addition to having a great dine-in experience and a great takeout experience, adding curbside and third-party delivery, those are just part of our model.”

Smokin Oak’s long-term goal is to reach 100 restaurants by 2027, and it plans to achieve that by partnering with the best multi-unit operators in a given market. The chain’s website lists Atlanta, Houston, Nashville, Jacksonville, Orlando, Tampa, Phoenix, Las Vegas, Des Moines, San Antonio, Boston, Philadelphia, and St. Louis as some of the most viable trade areas.

“We know that our guests have a choice in where they're spending their money, and we're just so grateful when they choose to spend it with us,” Mongoven says. “Especially with inflation going up, the price of gas going up, et cetera. Everyone is watching what they're spending, and I think for us, we can look at the price point that we have and be really proud of the fact that you can get a wood-fired pizza for $10.95. That's a fantastic value, and it's really built for a price point where people can still go out and get a great quality product for a fair price.”