The fast casual is on pace to double in size this year, with plenty of growth ahead.

Andy Howard was handed his marching orders. For a decade, he helped Wingstop climb from 80 locations to north of 600 (there are about 1,500 domestic units today). Howard directed marketing, R&D, branding, purchasing, and even inspired the chain’s fall 2005 call to add boneless wings when food costs surged above 40 percent.

But at 6 every Monday morning, Howard, a Florida native born and raised in Miami Beach who resided in Fort Lauderdale, boarded a flight to Wingstop’s Dallas base—or wherever the job took him. He’d return Thursday and the cycle repeated. “As I say, luckily, my wife is a saint and kept the family going,” he says. “We had such a great ride at Wingstop.”

As Howard looked ahead, his wife requested only that he keep this career stop grounded—anything he could hop in a car and get to. Naturally, for Howard, it also had to involve chicken.

Before Wingstop, Howard’s poultry-fueled journey, which would eventually dub him, “The Chicken Expert,” began at Kenny Rogers Roasters. The brand specialized in wood fired rotisserie. Next, George Naddaff’s Ranch One, which focused on chicken breast. Then, Wingstop. In that case, Howard had to be convinced a brand could build a scalable operation around just the wing. One trip to Texas, with lines wrapped around the building, solved any hesitation.

With his latest venture, Howard’s boneless experience weighed heavy. Beyond helping Wingstop temper costs as mix shifted, it brought forth a new demographic. Sales “jumped up incredible” as guests who didn’t eat classic wings found a path in. And yet, without knocking his old shop, Howard says the product was “a mediocre tender,” at least compared to the “best in the industry” bone-in wings it’s known for.

“Long story short, I leave Wingstop and I said, boy, based on that success, if I could find the world’s greatest chicken tender, with a Wingstop business model, I think I might have something special,” Howard says.

With his wife’s appeal in mind, Howard drew a radius around the Sunshine State and Googled “chicken tenders.”

Taste-tests and trials eventually took him to Orlando, Florida-based Huey Magoo’s, which was founded in 2004 by Matt Armstrong and Thad Hudgens. The pair figured Howard for a franchise prospector when he approached six years ago. “Little did they know, I really wanted to buy the company,” Howard says. There were three locations. Armstrong and Hudgens eagerly brought Howard onboard (both are still involved, as partners and from the franchisee level).

Howard’s fourth chicken stop—the tenderloin—is one he thinks has massive upside. Huey Magoo’s has changed myriad systems since his arrival, from tech stacks to infrastructure, but the fast casual’s steroid- and hormone-free tenders, marinated for 24 hours and served hand-breaded or grilled, are the same as Howard’s first day.

“I think it’s what differentiates us from all the others,” he says. “… We’re never going to say we’re the original, but we can say we’re the best.” The chain recently trademarked the moniker, “Filet Mignon Of Chicken.” 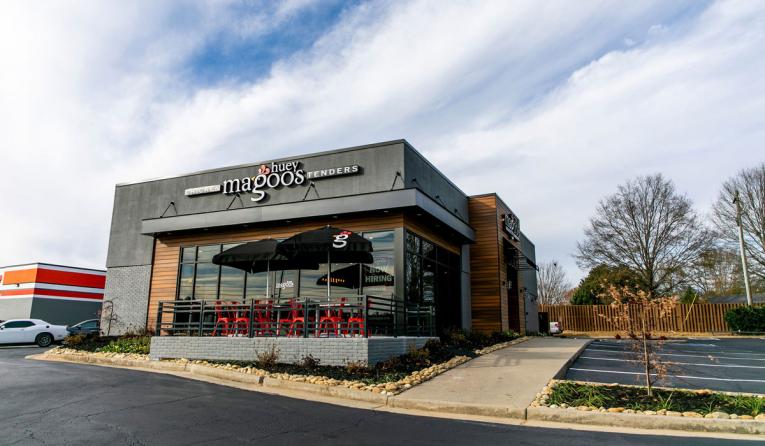 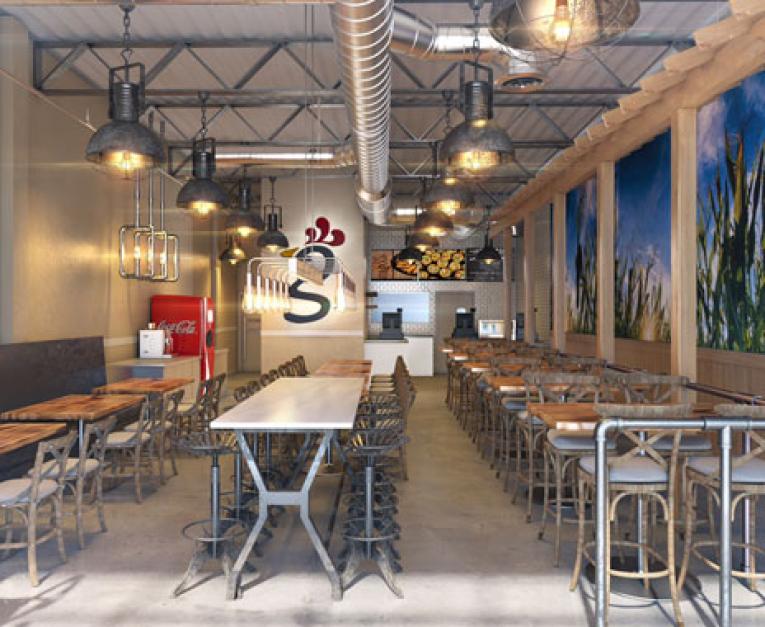 Howard’s restaurant experience taught him to ask another question before buying in: Does the market need more Huey Magoo’s?

Or as he phrases it, “Is there room for a small, little chain to compete with the Chick-fil-A of the world, and Raising Cane’s, and Zaxby’s?” Combined, the three chicken tender pillars (although Chick-fil-A, versus the other two, is more of a sandwich focus) exited 2021 with 2,732, 567, and 908 units, respectively. There’s also Guthrie’s, a 50-year-old brand with 42 stores across the Southeast and Midwest and 35 in development. Guthrie’s CEO Joe Kelly Guthrie, who is the son of the company’s founder, told QSR in December 2020 chicken-finger restaurants represented a roughly $4–$5 billion-a-year industry. However, he felt it could reach $25 billion within the next two decades. Maybe sooner.

Howard has similar thoughts. “I think there’s room for all of us,” he says. “Those that do a great job with the recipe, with hospitality, with operations, those are the ones that are going to stand tall.”

For Huey Magoo’s, Howard just had to try the product to envision how it might fit alongside that boom. The quality spoke for itself, he says. But returning to the “Wingstop model” piece of growth, it was mostly a real estate arc. When Howard acquired the chain, he figured to mirror Wingstop’s inline, strip center, pickup heavy business.

And the strategy worked out of the gate. Yet seeing Chick-fil-A and the aforementioned category leaders ratchet up development, it became apparent the “tenders guys” were thriving with drive-thrus. Huey Magoo’s decided to add the option, as well as order-ahead pickup windows. “And sure enough, first one we did in a little town in Georgia called Loganville [January 2020] surpassed $3 million the first year,” Howard says. “It hit numbers that we never thought we could achieve. So we just keep raising the bar.”

Drive-thru helped Huey Magoo’s develop a diverse suite of options with “five or six different models” for operators to tap: The original, inline non drive-thru; end-caps of centers, without a window or with one; second-gen freestanding builds, which have converted everything from Pizza Huts to Steak ‘n Shake boxes; and ground-up developments.

Howard believes Huey Magoo’s has an edge on some of its peers, who aren’t likely to offer in-lines anytime soon. “Franchisees like it a lot,” he says. “They can pick and choose the way to develop.”

In mid-April, Huey Magoo’s opened its 23rd location. The Pearl, Mississippi, store is 3,400 square feet, with indoor and outdoor seating and a drive-thru. It’s the second of 20 Huey Magoo’s slated for Mississippi under Golden Corral franchisees Buddy and Stacy Powell.

Based on what’s written on the “drawing board” today, Howard says, Huey Magoo’s has sold 225 locations. There are about 30 different franchise groups comprising that pool. Huey Magoo’s sells minimum three-store deals.

Howard isn’t one to toss projections about, but he’s seen how franchise growth can feed itself if the sales support it. Operators generally start slow and gain. Presently, Huey Magoo’s 2022 is shaping up to be plenty ambitious on its own as it charts 30 or so venues. That would more than double the current footprint. 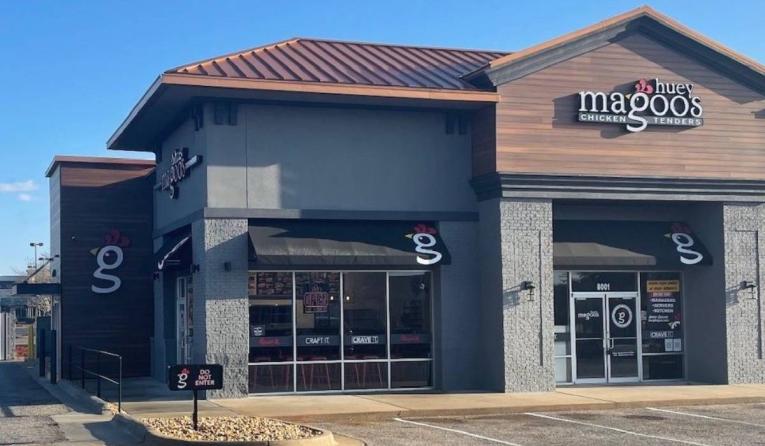 As cliché as it sounds, Howard says he’s trying to keep this 23-unit chain’s success in front of it. “It really is one at a time,” he says. “They all have got to be great.”

“And if we do that,” he continues,” we’re going to be in hundreds of stores.”

Howard doesn’t have an ultimate number. He just knows Huey Magoo’s can get there, and, hopefully, create some millionaires along the way. For a 23-unit chain, the fast casual has a “huge overhead,” he says. But that’s the cost of setting up for the future.

When Howard took over, he brought Wingstop brass along. Michael Sutter (promoted to chief operations officer in December 2018 and a former Wingstop VP of training), Wes Jablonski (board member, ex-Wingstop EVP), and Bill Knight (also a board member, former Wingstop COO) were part of the original deal. Matt Poleos, Huey Magoo’s VP of operations, spent 11 years with Wingstop before a three-year stretch with Fuzzy’s Taco Shop.

Howard could go on but the notion is a straightforward one—Huey Magoo’s has the foundational chops of a national brand.

“As long as we do the right thing, which we’re doing, follow the plan, yeah, we can be a pretty major, major force in the industry,” Howard says.

Another angle, too, is the fact Huey Magoo’s was set up for off-premises volume before it became a COVID-triggered movement. The brand generates 70–80 percent of its take outside the four walls.

With supply challenges, Howard says he can pick up the phone and “call just about any chicken guy in America and, usually, they’ll take my call.” The brand isn’t planning for today, he adds, but really, at least a year out. Huey Magoo’s took price, as most chains have, to combat inflation in 2021 but has tried to forge an analytical approach. Importantly, though, Howard says, customers appear willing to pay as long as the brand keeps up its end of the product and portion promise.

21 Main Street, Suite 204
Hackensack
NJ
203-883-6060
SH Franchise Finance is an independent finance company, so we know what it is like (more)
Advertising & Marketing