With the help of a new incentive program, the chain wants to sign at least 10 new multi-unit franchise operators this year.

Hungry Howie’s has roughly 535 restaurants across the U.S., with 95 percent being owner-operators.

When Steve Clough joined Hungry Howie’s as director of franchise development last year, he referred to the brand as “the best kept secret in pizza.”

If he has anything to say about it, the legacy chain won’t keep that distinction much longer. After slowing development during the pandemic to focus on its existing fleet, Hungry Howie’s is preparing to jumpstart growth through what Clough called the most aggressive incentive program in brand history.

The pizza chain is offering potential operators up to $150,000 in free royalties for three or more locations. The program is targeting multi-unit franchisees who are looking to expand their portfolio and move Hungry Howie’s into new markets or even infill where the brand already exists.

Hungry Howie’s has roughly 535 restaurants across the U.S., with 95 percent being owner-operators. The footprint ranges from single-unit franchisees to those that own 40 or more. From 2018 to 2020, the franchising system closed a net of 23 stores, but Clough is looking to curb that trend.

History suggests he’s more than capable. The industry veteran spent 10 years at Domino’s, including time as director of franchise development and recruiting. During his tenure, he played a role in building the chain’s plan to open more than 1,000 domestic locations in eight years.

“This is going to be about developing our brand and building our brand and moving quickly and gaining a lot of momentum,” Clough says. “[The incentive] is a pretty important piece of that puzzle to try and jumpstart that growth.”

Hungry Howie’s is part of a roughly $50 billion pizza category that’s thrived in the past couple of years because of its well-known portability. For instance, Domino’s earned more than $170,000 in store-level EBITDA last year and Papa Johns opened a net of 250 restaurants, a new company record. Also, Pizza Hut is close to flipping its annual U.S. growth to positive, Marco’s Pizza wants to reach 2,000 stores, and Little Caesars has announced growth plans for a long list of markets across the country.

“We've got a really strong business model that survived a lot of things, including the pandemic,” Clough says. “ … Now how do we build on all the things that are working really well in the brand to accelerate the growth of the brand?”

His goal is to sign at least 10 multi-unit operators this year. He won't set a bar for the number of restaurants attached to those deals because “this business, especially in development, is really about building momentum," he says.

There’s interest in Texas, across the South and East Coast, and up the I-75 corridor, which runs through Florida, Georgia, Tennessee, Kentucky, Ohio, and Michigan. Hungry Howie’s would also be open to development further west. According to the chain’s website, California and Washington are closed markets, but states like Nevada, Colorado, Utah, and Arizona are open for single or multi-unit franchisees. 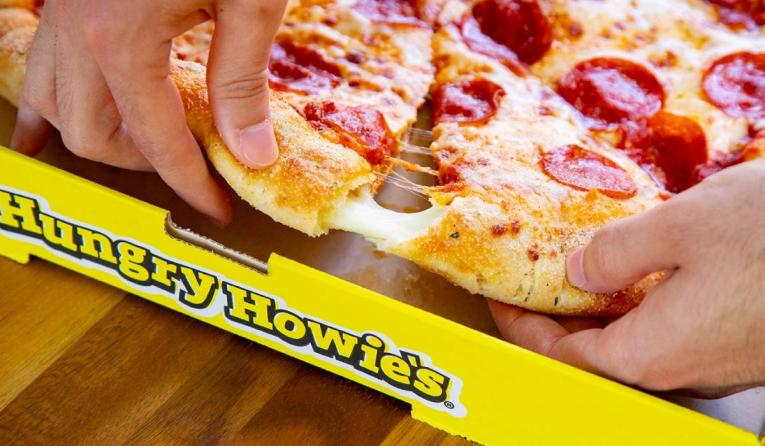 Michigan, where Hungry Howie’s is headquartered, is one of the more notable markets, especially since growth was shut down in the state for about 10 years due to saturation and lingering effects from the Great Recession. It wasn’t reignited until early 2020. In the past couple of years, the brand has opened new outlets Big Rapids, Melvindale, Detroit, Owosso, and Dundee.

Clough says the pizza concept could easily fit another 25-30 restaurants in the state.

“What I look at in 2022 is building momentum to lead in the subsequent years and continue to accelerate growth beyond that,” Clough says. “For me, it's about finding the right business partners to work with whether that’s our internal franchisees or bringing new franchisees in from the outside and really putting them on a fast track for growth. I think we're absolutely poised for success.”

The Dundee, Michigan, restaurant was opened by franchisees Patrick Shannon, Carole King-Shannon, and Julie Thomas. The group already owned several stores in Michigan, including spots in Adrian, Ann Arbor, and Milan. They plan on debuting two more in Monroe and Tecumseh.

It showcases that Hungry Howie’s is still focused on existing franchisees. Current operators have a financial program in place called the “jumpstart incentive,” Clough says.

“The response from our franchisees has been really good. High interest level in taking advantage of the incentives that we've got because I think they recognize that we're a brand that's always been very supportive of our franchisees and literally we're putting our money where our mouth is as far as development goes in this particular initiative,” Clough says.

Hungry Howie’s searches for spaces between 1,400 to 1,600 square feet that are housed in what quick-service concepts typically aim for—inline, endcap, standalone, etc. Nothing about the pandemic changed the pizza chain’s mindset on those parameters.

However, there is something to be said about the segment’s shift from a phone-call-reliant delivery business to more of a digital carryout operation in the past 10-15 years, Clough notes. That means Hungry Howie’s will be on the lookout for more pickup windows.

“The model, I would tell you, is constantly evolving, and the pandemic obviously did change some of those dynamics,” Clough says. “I mean curbside pickup, it was pretty much not non-existent. It was a very minor element in those concepts. Now it’s something that's front and center and that's obviously changed.”

With a number of pizza chains looking to grow their franchise base, as well, Clough recognizes the importance of offering a differentiated brand. He says that begins with Hungry Howie’s legacy, including the celebration of its 50th anniversary next February. The company is also the indisputable owner of flavored-crust pizza, like butter, asiago cheese, Cajun, butter cheese, sesame, garlic herb, ranch, and onion.

Additionally, Clough pointed toward the depth of talent in the C-suite, starting with CEO Steve Jackson, who has been in the pizza business for more than 40 years, and EVP of Marketing Rob Elliott, who spent nearly 20 years combined at Little Caesars and Papa Murphy’s.

“Having been in other pizza concepts before, I would tell you that I would put our product up against anybody,” Clough says. “I think we have phenomenal product and one of the benefits of that is we breed very loyal customers because they love our pizzas and the food that we deliver to them. We also have the ability to adapt and grow.”

“When I'm talking to people about growth, it's really about, we don't know what tomorrow holds necessarily, but I'm highly confident that no matter what it holds, we'll adjust our business model to accommodate it and thrive with it,” he adds.

Can Autonomous Technology Power the Future of Restaurants?
Is Sustainability the Future of the Restaurant Supply Chain?
Coffee Chains Brace for their Latest Challenge—Inflation