The full-service brand is embracing off-premises and speed of service, but staying away from the routine assembly line model.

Since the start of COVID, a number of casual-dining powers have dipped their toe into fast casual. Buffalo Wild Wings, Hooters, TGI Fridays, P.F. Chang’s, Friendly’s, and IHOP among them. And they’re all doing it for a reason. Digital orders increased 13 percent in 2021, on top of a 100 percent rise in 2020, according to The NPD Group. Delivery orders lifted 17 percent, lapping an 89 percent again, while drive-thru and carryout increased 4 and 2 percent year-over-year.

Off-premises has proved sticky two-and-a-half years into the pandemic. The casual giants realize it, and so does full-service barbecue concept Jim ‘N Nick’s, which has grown to 38 locations after nearly 40 years of business. The difference being, the Alabama-based concept is looking to carve out what it calls quick-casual plus.

As CEO Larry Ryback explains, Jim ‘N Nick’s wants to join the quick-service space, but nothing that resembles the typical assembly line format. Yes, the chain rearranged its layout to include POS terminals, an ordering queue, and a self-service beverage station, but after that is where the “plus” comes in. Guests choose where they’d like to sit, and workers will not only bring food to them, but they’ll also clear plates, refill beverages, and offer dessert—many of the convenient touch points found in casual dining. If customers want a purely full-service experience, they can sit at the bar and let the bartender take care of their needs.

“We just think it creates a lot more flexibility for people to be able to use us,” Ryback says. “Whether it's for a quick weekday business lunch or a weekday dinner with family where you can get in and out or if you still want a more leisurely experience on the weekend or you still want the date night experience, we can accommodate that too.”

Jim ‘N Nick’s is tackling this transition in two ways. One is through renovation, the first of which took place at the brand’s Marietta, Georgia, restaurant roughly two years ago. The most recent remodel came in Franklin, Tennessee, earlier this year. Along with inserting an ordering station, the units now feature a designated takeout station near the front door. This prevents to-go customers from needlessly walking too far inside and creates a shorter route for employees running curbside orders to parked cars. Those two additions make up the lion’s share of remodeling expenses. Ryback says Jim ‘N Nick’s hasn’t had to invest much otherwise because the chain routinely puts capital into maintenance.

The company is also opening new units within the quick-casual plus scope. The first came in Sharpsburg, Georgia, about a year-and-a-half ago. The second opened in Oxford, Alabama, where the brand “made a quantum leap” in drive-thru, Ryback says, with two lanes, employees in the parking lot with handheld POS tablets, and a cooking line in the back of house to improve speed. The box is resized to fit channels that are growing the most, namely takeout and third-party delivery. That means less square footage for dine-in, a channel that’s seen sales remain close to flat. 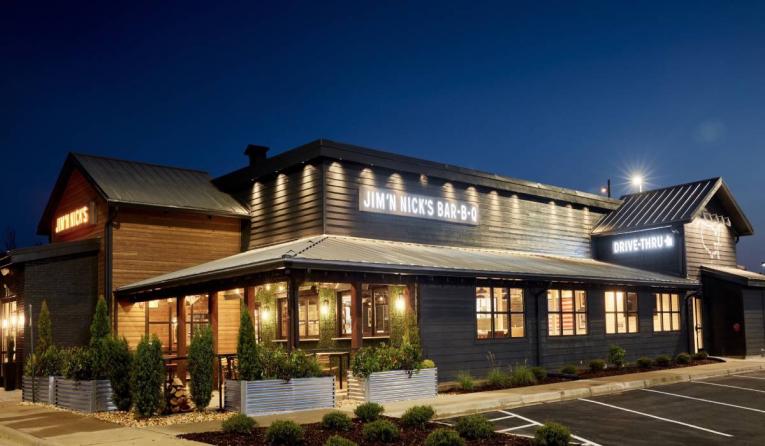 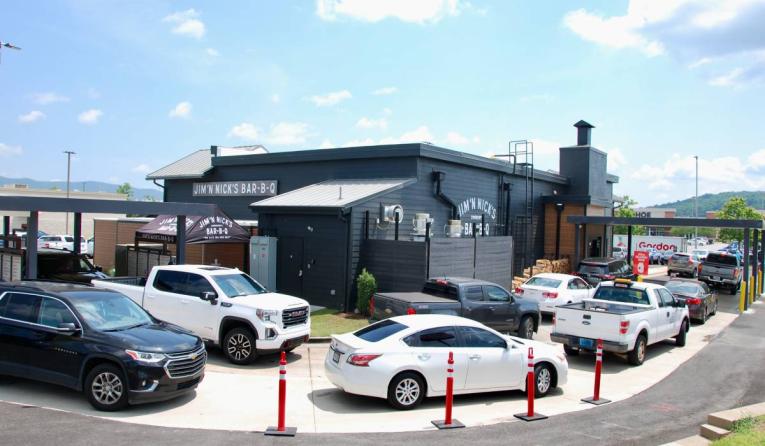 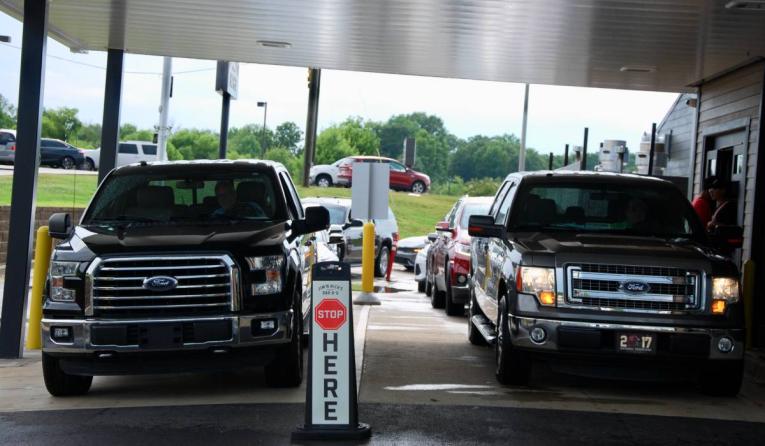 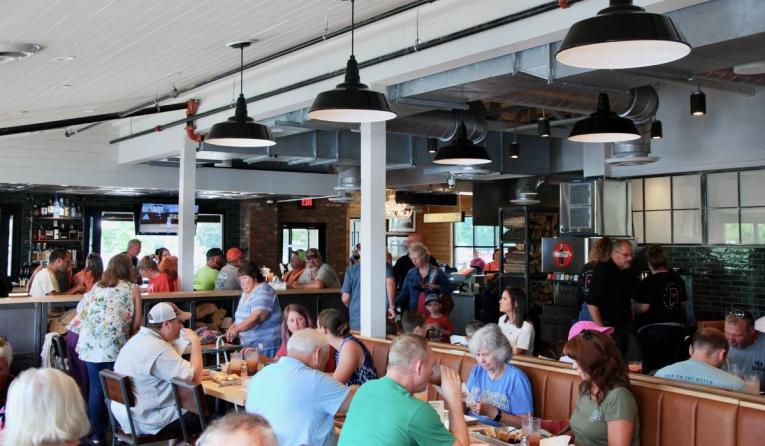 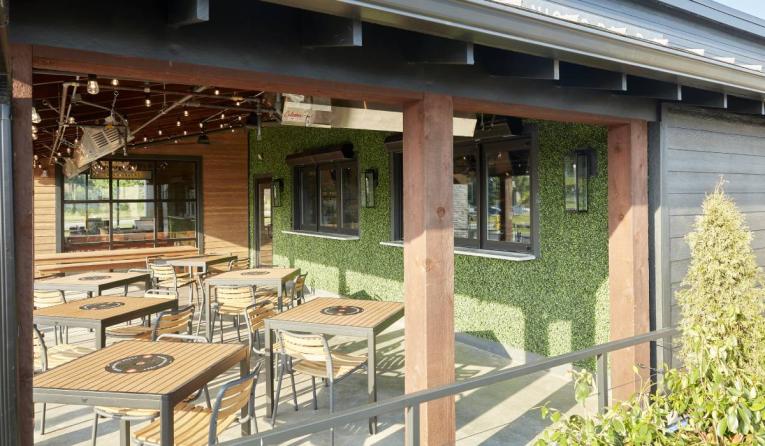 Even though Jim ‘N Nick’s is full-service, it’s operated a drive-thru for more than two decades, so it’s familiar with its attractiveness. Before COVID, sales were about even between off-premises and dine-in, but since then, sales outside the four walls have grown to two-thirds of business.

“The drive-thru has been such a big part of our business,” Ryback says. “It's forced us to get good at handling an off-premise business, which was really fortuitous during the pandemic. While a lot of companies were trying to figure out how to build or how to implement or how to execute off-premise, we have not only already learned how to do that a long time ago, but we had built a reputation for being able to do it well, so that's been invaluable. For drive-thru, we’re going all in. We’ve taken drive-thru to a whole new level.”

Jim ‘N Nick’s retrained front-of-house staff as part of the transition, but Ryback says it was a relatively simple move because of the chain’s constant focus on hospitality. The CEO isn’t sure yet how much the quick-casual plus format will change headcount in the restaurant; while staff needed for dine-in services may reduce, the need for workers to help with off-premises is increasing. So in the end, Ryback believes it may just change hiring positions as opposed to roster size. Although a cooking line was created to help with throughput, there’s been no alterations to ingredients or how food is prepared.

In anticipation of customers asking questions, Jim ‘N Nick’s started a guest ambassador position—a person who greets customers at the front, directs traffic, and guides guests through the new experience.

“If you don't do that and you just change stuff, people don't understand why and generally guests don't like that,” Ryback says. “But because we've helped guide people through the change, what they realize and the feedback we've gotten is, it's a much faster experience. Because you pay at the register when you order, the ability to just leave when you're done with your meal and not have to wait for a check and wait for your credit card to get processed and all that stuff just makes it so much faster. That's been the most positive feedback is both the speed and the flexibility that allows guests to use us in different ways.”

Jim ‘N Nick’s plans to open 10 restaurants in the next 18 months, and all of them will follow the quick-casual plus operation. Expansion will primarily focus on existing markets in the Southeast, including Alabama, Georgia, Tennessee, North Carolina, and South Carolina.

However, the restaurant hasn’t made a decision on whether all existing units will undergo the transformation. There are no immediate plans to remodel another store. With just four conversions and two new quick-casual locations, Ryback says the brand is still in the evaluation period. But with that said, the brand couldn’t be more pleased with the progress.

“We're fortunate to have a successful business where we have a lot of guests who really love us, and so before we make a change like that we want to make sure we think about the specific location and the market that it's in and the guests in those markets before we make that decision,” Ryback says. “We're not by any means rushing out to convert any of them or all of them overnight. It's too early for me to say that there will come a point in time where they all get converted. I that's certainly not part of our plan at this point. We're just evaluating and making those decisions on a market-by-market, case-by-case basis.”