Jollibee Foods Corporation prides itself as one of the largest and fastest-growing Asian restaurant company in the world.

The Filipino brand oversees a diverse portfolio. It purchased The Coffee Bean & Tea Leaf for $350 million in 2019 and acquired a majority stake in Smashburger in 2018 for $100 million. The parent company also operates Burger King and Panda Express stores in the Philippines.

The flagship brand, though, as the name reflects, is fast-food chain Jollibee. The chain has more than 1,400 locations across the globe, with a presence in Europe, the Middle East, East Asia, Southeast Asia, and North America. It was founded in 1978 in the Philippines, but didn’t reach America until 1998 in Daly City, California.

Of all those stores, only 66 are based in the U.S. and the rest of North America—but that’s about to change. Jollibee plans to reach 300 locations across North America by 2024, far beyond the 12 states and four Canadian provinces in which it currently resides.

This year alone, the brand will open 28 locations, including downtown Chicago, the middle of Times Square, and the first store in downtown Vancouver.

“The big vision of our company is to become one of the top-five restaurant companies in the world, and North America for one is going to be a key market for that international expansion,” says Maribeth Dela Cruz, president of Jollibee, North America.

Dela Cruz says the initial strategy is to enter markets where the brand already has high awareness, which would be where there’s a large concentration of Filipino Americans who’ve migrated to the U.S. Among the top-10 metropolitan areas with the largest Filipino population in 2019, five were in California, according to Pew Research Center. Sure enough, the largest concentration of U.S. Jollibee’s is in the Golden State, with 23 open units and five more coming soon, according to the website.

Once those are filled, the plan is to expand past those areas, and Dela Cruz believes there’s demand for such a move. The executive says there’s growing interest and taste acceptance for international brands arriving with new flavors and diverse menus.

“Those are actually helping fuel the growth of brands like Jollibee, and so we've been getting a lot of interest on that,” Dela Cruz says. “The intent is to make sure that we have the presence of the store in diverse markets or in different markets, because at the end of the day as people say, we want to patronize the brand except there's not one store that's near me. So I think strategically, it's important that we be able to expand to a wider area, more locations across North America, so that it can help also in consumers reaching us.” 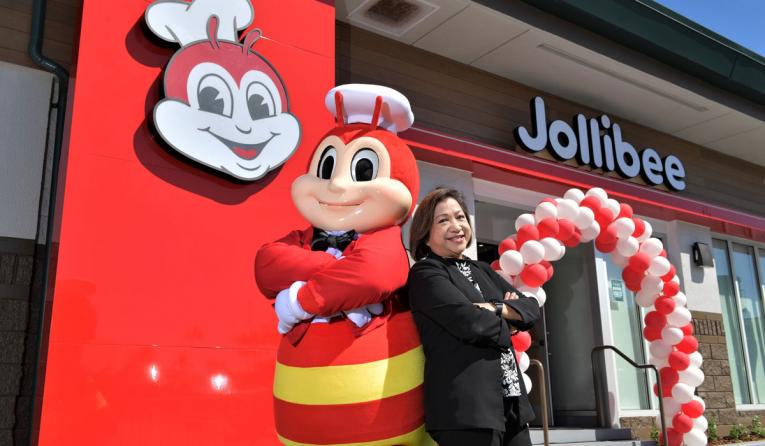 For an international brand building in the U.S., the most important factor is maintaining authenticity, Dela Cruz says. With that in mind, Jollibee’s focus is to offer a unique and differentiated product to separate itself from American players.

Jollibee is recognized for its fried chicken, in addition to a Yumburger crafted with a signature dressing, and spaghetti topped with Jollibee’s signature sweet-style sauce and chunky slices of ham, ground meat, and hotdog. The menu also showcases the brand’s Filipino roots, like the Palabok Fiesta, which Jollibee describes as a “traditional Filipino noodle dish covered in garlic sauce, crushed pork rind, shrimp, and egg."

In addition to authenticity, Dela Cruz highlights Jollibee’s ability to “serve joy in every way that we can to consumers." The company calls it FSC, or food, service, and cleanliness standards.

“We really put a lot of emphasis on great tasting food as well as just really a joyful type of service,” Dela Cruz says. “Filipinos are known for their hospitality. And so we'd like to bring that kind of differentiated service in the North American market. And so far customers have been recognizing there’s a warm hospitable environment in all the restaurants. Those are the things we continue to do. We want to make sure that Jollibee comes in an authentic way here in the North American market. We should be able to adapt as well by introducing products that are very familiar with the North American consumers, but ensuring we put in our own unique twist to it to have differentiation.”

Jollibee has fared better than most throughout the pandemic. During the first two months of 2020, the chain saw sales grow by double digits. When COVID hit in March, there was a noticeable impact for the first few weeks, but Jollibee quickly regained its footing, mostly because 50 percent of stores feature a drive-thru. Prior to the pandemic, the plan was to launch delivery in the latter half of 2020, but the crisis forced Jollibee’s hand, so it rolled out a partnership with DoorDash in April 2020.

The chain ended 2020 with sales increasing 15 percent compared to 2019. So far in 2021, sales are growing 37 percent against last year. Because only half of stores have drive-thru, dine-in mixed roughly 40 percent prior to COVID while drive-thru mixed around 20 percent. But with dining rooms shutting down for months, the drive-thru channel shot up to 70 to 80 percent. Dela Cruz says customers have asked Jollibee to reopen indoor dining, and stores have complied, but the executive acknowledges that drive-thru will remain a priority going forward. 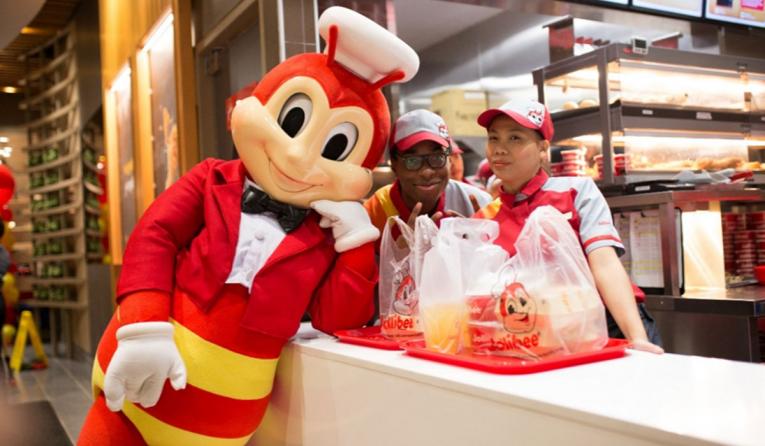 “We continue to be focused on our mission of serving great tasting food and bringing the joy of eating to everyone,” says Maribeth Dela Cruz, president of Jollibee, North America. “That's what the brand is all about is really giving a lot of joy.”

“Drive-thru has been key in the growth during the pandemic and obviously something that will continue to persist moving forward. Whenever we try to look for real estate or for locations, the priority is to find the location that will allow us to put in a drive-thru,” Dela Cruz says.

Operationally, Jollibee has faced the same headwinds as a majority of the industry. Dela Cruz notes that rising commodity costs, particularly with chicken, have been a challenge, but adds that Jollibee has forged solid relationships with vendors, especially for raw materials that make up its best-selling items. In terms of labor, the North American president says turnover has remained relatively low, which she attributes to a culture that focuses on a spirit of family and fun. For stores that are newer, the rate of applications has been slower, but that just means Jollibee must continue to be competitive with wage rates and the training and development opportunities it offers, Dela Cruz says. And then once the workers are in, it’s a matter of ensuring they remained engaged.

Dela Cruz has actually found that labor shortages affecting other industries have impacted Jollibee. For example, some restaurants are ready to open, but there’s a long wait for city inspectors.

“I think the cities are having some issues on labor shortages and so you really have to line up and wait for it,” Dela Cruz says. “So if there's anything, I think that's the first thing that's really impacting our development schedule. Currently we have five restaurants that are already ready to go, but we have to just wait for inspections to happen, and we're just keeping our fingers crossed that those inspections happen so we can start the operations of these locations.”

Moving further into 2021, Dela Cruz expects sales growth to continue. More restaurant options are reopening and becoming available, but the executive says Jollibee can counter that with new customers it gained during the pandemic when 95 percent of its stores remained open.

“We continue to be focused on our mission of serving great tasting food and bringing the joy of eating to everyone,” Dela Cruz. “That's what the brand is all about is really giving a lot of joy."