The brand was the "belle of the ball" amid the pandemic-infused period. Customers flocked to the 135-unit chain’s drive-thru as dine-in options became unavailable. Sales skyrocketed 20 to 40 percent some months. AUVs in 2020 reached a record $1.46 million, and same-store sales increased 12.7 percent compared to 2019.

The huge year put Lee’s in a different category. Many brands are seeing unusually large same-store sales when compared to 2020 because of how much COVID affected operations. In those cases, concepts are choosing to look at 2019 to give a more accurate portrayal of how they are performing. Lee’s, however, has the opposite problem in which it has to compete with its own success last year.

So far so good though—sales grew 5 percent in May, or 23 percent on a two-year stack. Year-to-date, the chicken chain is up 16.3 percent compared to this point in 2020. Lee’s has experienced comps growth in 40 of the past 44 quarters, and 68 stores reported monthly sales records in 2021. Lee’s is also projected to post AUVs of more than $1.55 million this year, resetting the record it recently broke.

One of the biggest questions now is making sure Lee’s maintains its momentum.

“[Full-service brands] were forced to be innovative and we were not, and I think that's the challenge for our legacy brand going forward is if you did okay in 2020, but you didn't have to do a lot of things,” Cooper says. “We did a lot of things differently, but not like those guys. They were doing it for survival. We were doing it to help maintain and make it easier for our customers. So I think that's a challenge for us.”

Lee's does have a major answer, however. Famous Recipe Group, parent of Lee's, announced Wednesday that it's selling the restaurant to LFR Chicken, a new entity backed by private equity firm Artemis Lane Partners. Terms of the deal were undisclosed, but it's structured to grow the number of Lee's stores in multiple states.

Cooper decided to sell the brand based on Artemis Lane's plans to add growth capital and an energized vision. According to the industry veteran, the current quick-service model requires more investment, enhanced data collection, and more efficient processes to support current franchisees, operators, and company-owned locations. He's confident Artemis Lane will provide all those measures and put a solid exit strategy in place for maturing restaurant owners. He described the firm as a "best-in-class partner that shares our values of transparency and excellence," and noted that it has "deep expertise in smooth acquisitions, capital deployment for growth, and empowering people."

Artemis Lane is led by Ryan Weaver, Sam Kaplan, and Kyle Tucker. The equity firm seeks to produce "flexible and patient capital to great businesses with substantial reinvestment opportunities." Artemis Lane structures its investments with an “infinite investment horizon.” Weaver explained this structure allows Artemis Lane to own businesses for the long-term without feeling pressure to sell them after a fixed number of years.

"We fell in love with Lee’s from the second we met Chuck, tried the product, and started learning about the brand and the strong heritage franchisees, owners, operators, and team members helped build. Our ultimate goal is to grow Lee's to be a billion-dollar brand and introduce it to a lot more cities and states across the country—we really think the sky is the limit for Lee’s," said Weaver, who is taking over as CEO, in a statement. "New technology, new processes, and new investment can be applied to this already solid platform in order to scale the business even further."

Other than the sale, Cooper’s immediate response to holding on to momentum is for Lee’s to recognize what it does well, and lean into it—the brand has been around for 55 years, after all. He separates the chain’s strengths into four goalposts. Three of those  are comfort food, family sized meal deals, and longevity of taste. The other goalpost—and one with the largest impact—is the drive-thru.

Pre-COVID, the channel typically mixed 65 percent, with dine-in and carry-out each accounting for 15 to 20 percent of sales and catering capturing around 6 percent. Now drive-thru represents more than 80 percent of sales, and even 90 percent at some restaurants. Stores put workers in parking lots to take orders with tablets and manually formed a second drive-thru lane. The channel worked so well that future stores and others under remodel are building a second drive-thru.

“Although we know that's not new for the big boys, that's new for our size company as a regional company,” Cooper says. “So we've looked at all of those and understood that's something that we've had to ramp up. What we do really well is drive-thru and big family meals, and that happened to be a win for us over the last year.” 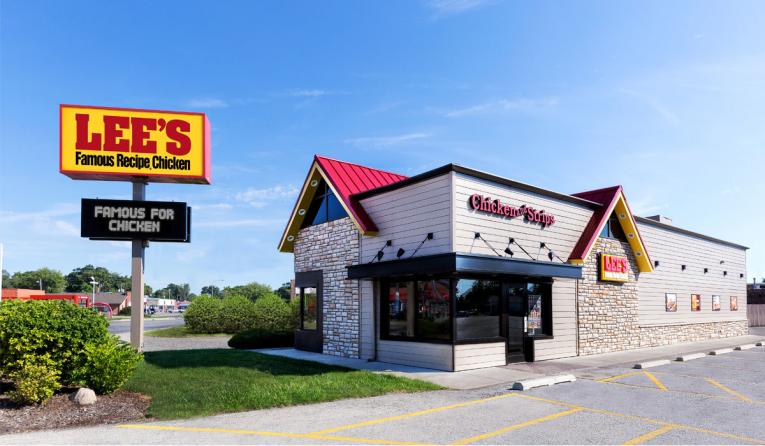 CEO Chuck Cooper explains that convenience and cost are important when consumers make decisions, but ultimately, the deciding factor is based on taste.

Lee’s quest to match 2020’s boom is being challenged by a chicken category that’s filled to the brim, especially with the entrance of numerous virtual brands from major players on the full-service side like Chili’s and Applebee’s. Cooper finds the idea of a virtual concept interesting, but he insists that Lee’s will continue to focus on what it does best instead of “trying to make lasagna in one oven and fried chicken in another.”

Cooper explains that convenience and cost are important when consumers make decisions, but ultimately, the deciding factor is based on taste, which he believes Lee’s excels at with its fresh, never frozen chicken. He considers the hand-breaded, honey-dipped, pressure-cooked approach a “complicated and delicate dance” in the back of the house.

“To get our chicken tasting like it tastes is very, very unique to us,” Cooper says. “I think that's going to be the longer-term challenge—can they really get the taste right? And are they willing to do that complicated and delicate dance in the back of the house to get that product really well.”

“We see [virtual brands] as competition, but we also know that the customer ultimately decides," he adds. “I think there's going to be a lot of trial. And I think if you're really just looking for availability and someone that can deliver it quickly, if a Lee’s is not in your market, then there's other options out there. But I like our fresh, never frozen hand-breaded, honey-dipped, pressure-cooked approach that I think sets us apart.”

The growing chicken category has contributed to a lower supply, causing prices to soar.

Using data from market research firm Urner Barry, the Wall Street Journal reported in early May that boneless chicken breast was trading at $2.04 per pound compared to roughly $1 per pound last year. The average price is approximately $1.32 per pound.

Cooper says Lee’s doesn’t want to keep increasing prices based on inflation, so it’s tried to take a deeper look and mitigate where it can. But at the end of the day, prices are in flux and it’s just trying to stay ahead. He views the supply chain as lots of differently sized cogs, where even the smallest turn can make everything else move. He used this example: If it takes one day longer to get pepper from India, then it takes one day longer to get the spice into a recipe, and so on, until it starts to become a noticeable issue at the store level.

Lee’s has tried to keep its operators up to date on what the next three to five months will look like, and they’re leaning on all of their suppliers—from chicken to flour—to provide the right information. According to Cooper, the brand prefers to evaluate products in three basic ways in this order: availability, consistency, and then pricing.

“So we have to make sure that we have the right kind of chicken or tenders or green beans, mashed potatoes, the breader, and then we need to make sure it's consistent so it's all the same size, and part of that is contractual and we negotiate with those suppliers, but part of that is just making sure that we're communicating with our operators,” Cooper says. “And then lastly, which is very important, is the price of those things. But I think we've agreed as a brand that we've got to have the product available. It's got to be a consistent size and quality. And price is also in the top three important things.” 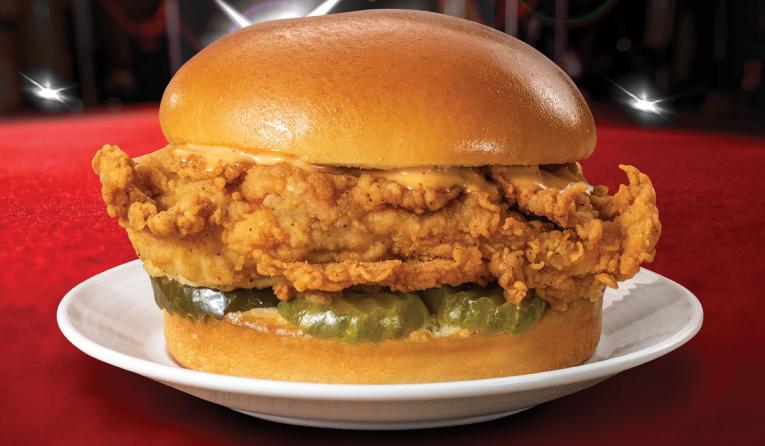 “Let's keep this going,” Lee's Famous Recipe Chicken CEO Chuck Cooper says. “We're enjoying some successes. We want to be over last year, and we think we will be. That is our hope is that we continue to just grow.”

Another major obstacle is the ongoing labor crisis. The number of job openings across the U.S. reached a record-high 9.3 million on the final business day of April, according to the Bureau of Labor Statistics. The data is part of the agency’s monthly Job Openings and Labor Turnover Survey. April was the highest amount since the series began in December 2000. The previous record occurred in March, when there were 8.1 million openings.

For Lee’s specifically, Cooper says restaurants are always actively recruiting, training, and promoting the best from within. He adds that one of the best parts of skyrocketing sales over the past year is that staff has become more efficient in dealing with higher volumes as opposed to other chains that are grappling with a recent spike in pent-up demand as restrictions have eased.

“I don't think we've ever seen this unique set of circumstances, but I do think we’ve had this boxing match before with these unknown forces against us, and not only have we survived, but I think we thrive,” Cooper says. “So part of this is just we have to get better at doing some of those things that we've always done fairly well, and our folks, I’m sure they're tired and we want to try to encourage them as much as we can to keep going, and we'll help fight the fights and fight the battles.”

Then there are challenges unique to Lee’s. Because it’s a legacy brand, some stores were built more than 25 years ago, and others longer than that. Cooper says the older restaurants weren’t built to handle the level of volume they’re seeing right now. But that doesn’t mean they can’t do it—restaurants have proven otherwise, he says.

So the path to overcoming last year’s high performance won’t be easy. One of the first things Cooper wants to know on Monday morning is how the chain performed the prior week. But there are plenty of reasons to be optimistic. Cooper says 8 to 10 percent of Lee’s customers in 2020 were new, and the brand believes it’s held on to that group a year later. Also, despite increased construction costs, franchise interest in Lee’s is at an all-time high.

As the restaurant moves through the second part of 2021, Cooper wants everyone to have perspective. Lee’s encourages fun and tries to take the pressure off of stores because he knows better days are still ahead.

“Let's keep this going,” Cooper says. “We're enjoying some successes. We want to be over last year, and we think we will be. That is our hope is that we continue to just grow."

21 Main Street, Suite 204
Hackensack
NJ
203-883-6060
SH Franchise Finance is an independent finance company, so we know what it is like (more)
Headsets & Timers