The brand is looking to hire thousands of workers to handle increased volumes.

Little Caesars' Pizza Portal (far left) has turned out to be an ideal contactless solution.

Three years ago, the brand introduced what it calls “Reserve-N-Ready,” which allows customers to order directly from the mobile app or website. When the order is ready, guests receive a notification, swing by the store, and pick up the pizza. The food is housed in the Pizza Portal, which “ended up serendipitously being no contact,” Gleich says. Consumers simply scan a QR code and the portal automatically opens.

“We originally did it, frankly, to just make the trip a frictionless experience for the consumer where they didn't have to stop by the front counter and ask about the order or have it handed to them,” Gleich says. “But it really worked well in this scenario with the pandemic to make it not just frictionless, but the safest way where there was really no human contact.”

Outside the first four weeks when customers rushed to grocery stores, Gleich notes that business has been strong, which is reflective of the pizza category overall. Domino’s and Papa John’s saw double-digit increases in same-store sales in the third quarter while Pizza Hut rose in the mid-single digits. Little Caesars earned $3.85 billion in revenue in 2019, a 1.3 percent increase year-over-year, according to FoodserviceResults. By the end of last year, the chain had 3,652 franchised U.S. stores and 561 company-owned locations.

Little Caesars’ performance in 2020 can be attributed in part to its delivery business, which didn’t even exist until December 2019. The company launched the channel through its website and app, with DoorDash providing drivers. The chain used a Super Bowl ad to announce it to the world, and then the pandemic quadrupled growth. Recently, Little Caesars placed itself on DoorDash’s marketplace, which has given the pizza concept an even higher lift.

“We’d love to say we were able to think it through, but obviously no one knew what was ahead of us,” Gleich says. “But it was time to get into that space. … As it grew, our eyes were always on it. As it grew year to year and DoorDash’s coverage expanded further and further out, covering more and more of our restaurants, it really became just more of a timing issue that it got implemented in late 2019 than earlier. It had reached a scale where it made sense to be able to offer it systemwide nationally.”

As order volumes rose, Gleich says a natural efficiency occurred in the workplace—the ethos of everyone who’s worked for Little Caesars. And that’s because the brand places franchisees in the right position by maniacally focusing on streamlining operations. For example, Little Caesars only sells large pizzas. Gleich says that’s deliberate because the company doesn’t see great demand for a second pizza, and the benefit of having one-sized pizza is “a much more efficient and easy to execute system than what we see out there elsewhere.”

Additionally, before launching delivery, the company decided it was best that drivers bypassed the counter and picked up the order at the Pizza Portal—a method that decreases wait times for customers and simplifies throughput for franchisees.

“These are competitive advantages we feel our operators have over our competitors in terms of an operating system,” Gleich says. “And then we wouldn't do it just for that alone. They're easier for consumer access. And that's really what drives most of our decisions.”

Little Caesars ensures it has the proper human capital to handle volume growth by hiring thousands of workers at various levels, such as hourly employees, assistant managers, managers, and manager trainees. The brand is also hiring warehouse workers at distribution centers and drivers with commercial driver’s licenses.

Gleich says onboarding new employees isn’t dramatically different during the pandemic, except there is social distancing within stores and everyone is wearing masks. Little Caesar’s parent, Ilitch Holdings—which also owns the Detroit Red Wings and Detroit Tigers—built a mask plant to ensure workers have adequate supplies.

“So, really, the modification in our training is just to make sure it’s COVID approved in a sense—as safe as we can do it,” Gleich says. “But it's still pretty traditional at the end of the day. You have to train someone on exactly where to put the pepperoni on and how far out to spread the sauce—those types of things.” 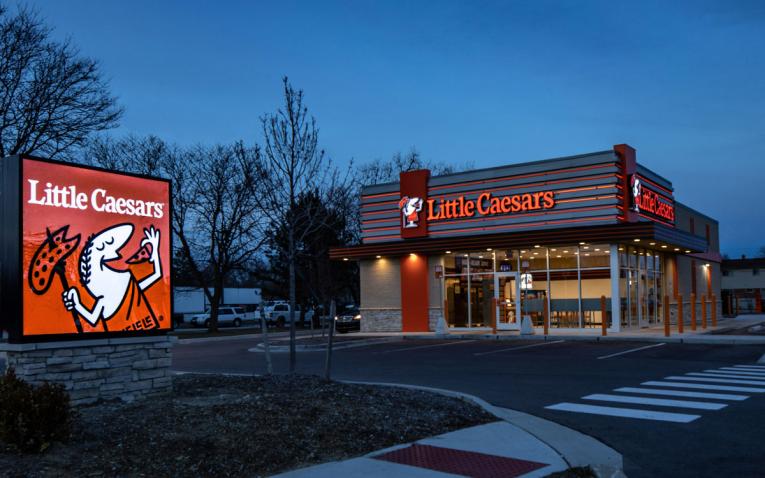 In August, Little Caesars opened its first stores in Colombia, after debuting in Spain, India, and Barbados in 2019.

In terms of menu news, Little Caesars did manage to release Stuffed Crazy Bread, the Pepperoni Cheeser! Cheeser!, and Slice-N-Stix, which combines four pizza slices with eight cheese bread sticks. The promotional calendar is built six to nine months out, but the cadence of product news was disrupted when COVID hit. Gleich says that at the time, Little Caesars chose to focus its marketing efforts on health and safety standards.

For about six to eight weeks, the brand ran commercials showing how it cooked pizzas, sealed boxes, and utilized the contactless Pizza Portal. Gleich notes this messaging not only put loyal customers at ease, but also built trust with new guests.

The executive says the current actions of operators will determine whether new customers will carry into a post-COVID world once more dining rooms open and the market re-saturates.

“It's critically important now, not later, to take care of them and make sure they have a great experience with us,” Gleich says. “So a lot of our messaging to our operators is reinforcing that how we treat these customers certainly is going to impact long-term. We're going to get a fair amount of carryout customers that are staying away. … There still is, I think, in the category certainly some people's behavior is to eat more in-house versus venturing out to pick up food. … We’re expecting a bump next year when carryout customers will either go back to eating, picking up food or increasing the frequency in which they pick up food.”

Because of the bolstered sales, Little Caesars fully expects to reach more customers around the world as it continues to build its pipeline. Gleich says the company has beefed up its development teams recently, both domestically and internationally. In August, the brand opened its first stores in Colombia, after debuting in Spain, India, and Barbados in 2019.

Interest from investors has only surged during the COVID pandemic. And according to Gleich, a greater reach means more opportunities to convert consumers into lifelong fans.

“Our observations are, we're very social people,” Gleich says. “This is no matter where in the world we have stores. People tend to like to eat out. They love the convenience of Little Caesars. Our expectation is that we see no reason why their behavior wouldn't come back to pre-pandemic levels once the vaccine is out. We're seeing recovery even before the vaccine. So we're highly optimistic."

Taco Bell’s Gravity-Defying Restaurant is the Future of Fast Food
In Search of the Perfect Drive-Thru Restaurant
What’s Next for the Fast-Food Drive-Thru Menuboard?

5 Questions with McDonald's Trailblazers Skye Anderson and Myra Doria
What is the Inflationary Tipping Point for Fast Food?
Amid Inflation, Restaurants Work to Guard Value Proposition

Why Inflation is Making Customer Experience More Important than Ever
The State of Restaurants: Demand, Price, and a Race for Loyalty
Inflation Sends Restaurant Customers on a Hunt for Value