The Man Taking B.GOOD's Food-Focused Mission to the Masses

B.GOOD is on a roll, and with new CEO Chris Fuqua at the helm, the company has continued plans to expand brand awareness, menu offerings, and the number of units in the chain. After nearly 15 years with the company, B.GOOD co-founder Anthony Ackil stepped down from his position as CEO. According to a recent press release, he departed “to focus on his next entrepreneurial venture and the next chapter in his life and career and to spend time with his young family.” Ackil will remain on the board of directors and as a continued investor, and he believes Fuqua, who came to B.GOOD from a lengthy tenure at Dunkin' Brands, has what it takes to propel the brand forward.

Having served as a member of the B.GOOD board for the last year, Fuqua feels that he was afforded the opportunity to get deeper into the workings of the company before taking the reins as CEO. “We want to build a better way to eat great tasting food with a better way to eat,” Fuqua says. “We think there's a big need out there for a lot more B.GOOD in the world, that it would be a better place. I see us continuing to grow in the U.S. at a fairly rapid pace, and we'll look at international markets as well because I think this concept certainly expands beyond the east coast. It's something that people of all ages want more of.”

Founded in 2003, B.GOOD has 69 locations, including 56 in the U.S., five in Canada, three in Germany, and five in Switzerland. The company sources fresh produce from local farmers and brings a farm-to-table ethos to their menu, which features burgers, sandwiches, seasonal salads, kale and grain bowls, and smoothies and milkshakes. This makes rapid expansion an interesting dilemma. Fuqua says the company has a five-point branding plan to keep its well-guarded integrity in place, regardless of how wide-ranging growth becomes. It includes consistent menu boards, a consistent look and feel to be integrated across the restaurants over time, and a menu that will be stable and recognizable in markets globally.

“Obviously the product that will be sourced locally will mean things are just a little bit different,” he says. “Local produce is a little different from place to another, so you'll see some variations. But in general, burgers, bowls, salads, and smoothies will be the main categories that we'll go after everywhere.” 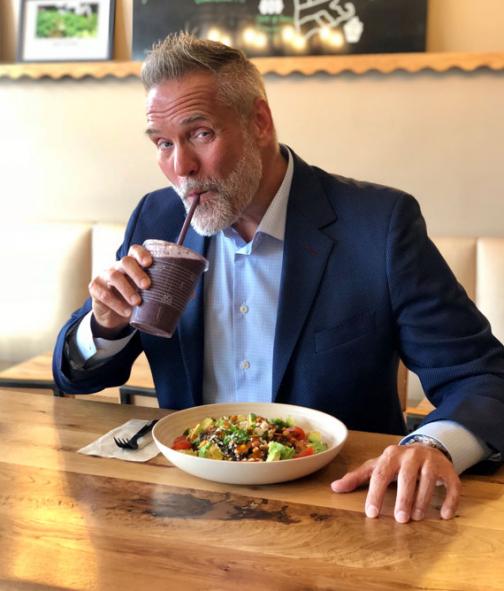 Just this past week, B.GOOD added to its executive team with the hire of Brent Feldman as chief marketing officer. He arrived from an EVP, group account director role at Hill Holliday, overseeing a wide range of clients including Dunkin’ Brands, Chili’s, and Coca-Cola. In addition to building brand awareness and driving sales, he will be tasked with sharing a message true to the brand’s roots, while telling stories about the farmers who source B.GOOD ingredients, the company said. “The surface has barely been scratched on the stories it has to tell about itself,” Feldman says in a statement about the brand.

The better-burger revolution has certainly spawned competition not only for fast food outlets but like-minded burger chains as well. Fuqua says that B.GOOD was founded on the concept of great burgers, and its expansion into bowls, salads, and smoothies “means there's something on the menu for anybody who wants to just eat a little better.” Such a wide variety of choices means a family whose members want different items “can come to B.GOOD and everybody can be happy.”

The company is anticipating further corporate and franchise development. “We have some pretty aggressive targets this year,” Fuqua adds, “and we will continue to grow in the Northeast and in a couple of new markets as well.” Currently, B.GOOD has an 80/20 mix of corporate versus franchised units. Franchising began in March 2013.

“I think with a brand like this, we want to make sure that we have control of what's going on,” Fuqua says. “I've met our franchisees, and across the board they are really genuinely good people who are excited about the brand, so I'm excited about growing with them and in blending more into the fold. But corporate development is still something a brand like this needs so that we can continue to build out the concept.”

Before working at Boston-headquartered B.GOOD, Fuqua spent nearly nine years at Dunkin' Brands, accruing experience and assuming leadership roles in areas including marketing, operations, supply chain, and strategy. That experience is proving to be invaluable for his new role at B.GOOD.

“It's tough for me to say anything bad about Dunkin',” Fuqua says. “I learned so much there and definitely grew up as an executive there, and they gave me so many opportunities. B.GOOD is at a much different stage, and it's fun to apply some of the things I learned into part of a concept that is right on trend. People are looking for healthier ways to eat. They want to be part of brands that are interacting with their community. I think B.GOOD hits on all notes in that area.”

Fuqua estimates that during his time at Dunkin' the chain opened roughly 2,500 units. A valuable lesson he gleaned from that experience is that he could see how one can make decisions during pre-scaling that could be easier to put in place than after a company has expanded a concept. He is hoping to be ahead of the curve in that regard with B.GOOD.

"If you look at some of the big players in the restaurant industry, they're trying to revamp their menus. The advantage we have at B.GOOD is that that's the foundation of what we're built upon." — Chris Fuqua, CEO of B.GOOD.

He adds that the company will continue to gain a local footprint, interact with communities, and identify and work with local farms to provide products for their restaurants.

“We are excited about expanding the menus seasonally, so we'll continue to look at things like watermelon and feta salad and bringing in things that are in season from a local produce perspective,” Fuqua says. “We're also looking at some of the trends out there. The bowls that we offer today are great, but I think we could expand into some other bowl areas. The eggplant meatballs that we have today—I would challenge anybody to tell me that that's not a meatball. It's unbelievable. We could see a lot of extensions off of that platform.”

“Fresh” is certainly a food buzzword that has been embraced by millennials, who have been driving a demand for healthier eating options across the foodservice spectrum. “The reality is everybody's trying to get into that,” Fuqua says. “If you look at some of the big players in the restaurant industry, they're trying to revamp their menus. The advantage we have at B.GOOD is that that's the foundation of what we're built upon. We are truly a local, farm-to-table, made-by-a-person company, and we will be like that as we scale, too. And then just back to the basics on the burgers.”

When he speaks of going back to basics, Fuqua is referring to building awareness of what B.GOOD sells. After serving his first month as CEO, he says he has observed unparalleled brand loyalty from B.GOOD customers. It mirrors that of his former company. Being a California native, he did not understand the fascination with Dunkin' Donuts until he moved to Massachusetts in the early 2000s. His wife, a Connecticut native, craved iced coffee from Dunkin' in the morning.

“I had no idea what she was talking about,” he says. “But having lived here for over a decade now, people are religious about that brand. And I think with younger, more health conscious people or people who want to eat better, we have the same opportunity with B.GOOD. I'm excited about it.”

He says that people unfamiliar with B.GOOD are surprised how good the food tastes when they try it. “We're going to build awareness around the basics,” Fuqua says. “We're a company that sells great food, and what it really comes down to is when people go to a restaurant they're looking for great tasting food. And I would put ours against everybody's.”

Fuqua sees B.GOOD moving full steam ahead, and he feels that it is an exciting time to be at the company. “The restaurant industry's changing people,” he says. “People want to eat better, they want healthier product, and they want things that are made fresh. There are a number of smaller companies that are going after that dynamic, and I think it's a good place to be right now.”