To be the best, you've got to beat the best.

That’s exactly what Marco’s Pizza has planned as it looks to secure its standing among the top quick-service pizza brands in the country.

Competing with the country's pizza giants means churning out serious numbers, and Marco’s is ramping up across the board. After closing 2021 with substantial growth, systemwide sales are projected to be $1 billion for 2022.

“It’s a continuation of 2020,” says Tony Libardi, co-CEO and president of Marco’s. “We knew if we could get people to try our product we would win the day.”

When the pandemic hit, the brand had just begun national advertising campaigns, which proved to be a huge factor in attracting new customers.

“We were on national TV, and we were talking to customers in a way we never had before,” Libardi says. “… Introducing our product to folks that had never heard of us. And frankly, we’ve got a terrific product.”

One of the main messages was Marco’s value proposition, including deals like the $7.99 medium one-topping pizza, a large two-topping pizza for $8.99, and its large "Pepperoni Magnifico" for $9.99, which comes with 75 slices of pepperoni.

“It's hard to get people to get away from their favorite pizza, and so we really had to talk to them in a way that compelled them both from a visual point of view, that we were showing on our commercials, as well as a price point where they could take the chance,” Libardi says.

The chain maintained this positioning despite record inflation and a stagnant supply chain, Libardi says. To avoid compromising on value, strategic pivots were required to avoid running out of stock. For instance, to ensure it had enough product for its busiest days, chicken wings were occasionally throttled back on Mondays or Tuesdays.

Strategies like this, Libardi says, allowed Marco’s to provide consistent value while other brands raised prices and pared back menus.

“Our supply chain team has done a remarkable job of keeping us in business,” he says. “It was a terrific collaborative effort between operations, marketing, and our supply chain. Frankly, our vendors really came through for us. Those long-term relationships paid in spades for us. We’ve been very fortunate. The leadership team has done a remarkable job.”

In addition to marketing and supply chain mitigation, Marco’s continues to rely on technological innovation, including ongoing relationships with third-party delivery platforms, ghost kitchens, and automation.

Before the pandemic, the brand was already establishing connections with major third-party delivery aggregators to raise awareness among new customers and compete for market share with larger chains. Libardi says online ordering allows for easier customization, which is the experience Marco’s wants to provide customers.

“It’s where the consumers are today,” he says. “Our objective is to create those frictionless experiences wherever the consumer wants to get a Marco’s pizza.” 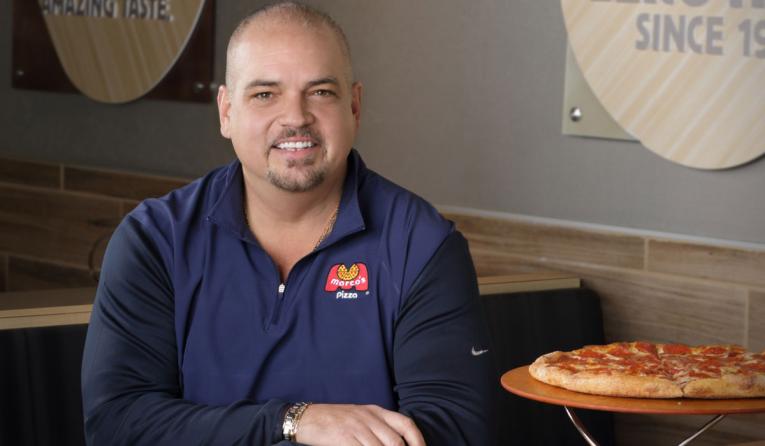 Franchisees have been receptive to ghost kitchens, Libardi says, and Marco’s plans to continue using the smaller spaces to test new menu items.

“We’ve had five or six we’ve been involved in, and we have learned a lot,” he says. “They’re successful and franchisees like them, and for us it’s another point of distribution.”

At traditional restaurants, the company is streamlining operations with robotic dough rollers that remove 80 percent of labor and AI-powered phone ordering. Marco’s has even piloted drone delivery, although Libardi doesn’t expect that to be a full-fledged operation any time soon. It’s more about being ready in case it becomes a bigger competitive factor.

“There’s a lot of initiatives in terms of automating the kitchen, automating the customer experience … and several of those things are coming out here pretty quickly, as we’ve tested them for quite a while now,” he says. … We want to innovate and want to be ready when the market shifts. We don’t want to be catching up.”

To reach the projected goal of 1,500 stores by 2023, Marco’s wants to shrink the amount of time it takes between signing a franchising agreement and opening day. Currently that timeline takes about ten months, but Libardi would like to see that reduced to around two months.

He says it can be done by simplifying the process. Instead of the franchisee identifying real estate, the brand will prepare a catalogue of available properties.

“We can proactively find real estate,” he says. “I can say, ‘hey, we’ve got these five locations that are ready to go,’ and that process alone can take three to four months off of that timeline.”

With a revamped approach to technology, franchising, and marketing, Libardi is confident in Marco’s ability to crack the top four of American pizza brands. He knows it won’t be easy, but that hasn’t deterred the executive and the rest of the team.

“We’re not naïve,” he says. “Getting to the fourth-largest pizza chain isn’t going to be an easy feat, but we’re going to continue loading the pipeline, and existing franchisees are extremely excited about our brand. We’ve got hundreds of projects already in the pipeline. … We’ve got hundreds of agreements sold that aren’t in the development pipeline yet, and we’re set to reach 1,500 stores by the end of 2023.”

Libardi says expansion will be helped by multi-unit, multi-brand operators and first-time franchisees. By keeping the business model strong and focusing on topline sales growth, he believes the goal of 2,000 units by 2026 is more than reachable.

“You can see growth is accelerating,” he says. “You can build the empire of your choice. If that’s one store, 10 stores, or 50 stores, whatever it is you want to do we will help you get there. There’s nobody better than our team.”