The fast casual expects to emerge even better on the other side.

McAlister’s Deli president Joe Guith heard the pundits like everyone else. If you were a lunch-based restaurant designed around dine-in, with a catering business, you might as well surrender to COVID-19. “That pretty much describes us to a tee, and yet we’re [not in trouble],” Guith says.

While the FOCUS Brands chain faced its hurdles, like anybody else, the opposite is closer to reality. The 470-unit brand posted positive net unit growth in 2020 and returned to pre-pandemic sales levels by the end of the year, despite the fact dine-in remains significantly reduced, to roughly a third of the business.

It’s a story of an on-premise concept morphing into an off-premises one, Guith says, and it hints at an even stronger McAlister’s on the other side.

To put this into perspective, the fast casual entered March with four modes of service—dine-in, takeout, catering, and delivery.

Today, there’s closer to eight. But to begin understanding the journey, Guith recalls some serendipitous foresight. McAlister’s spent eight or so months last year researching and plotting a better guest experience, as well as a fresh loyalty program. Fortunately, the platform launched in mid-February. And the bulk of McAlister’s investment, both from corporate and franchisees, came in 2019.

It set the foundation for the pandemic gameplan—accelerate accessibility at a 31-year-old brand known for its fast-casual-plus service before that was a widespread positioning in quick service.

To start, some franchisees piloted curbside pre-COVID. It was something McAlister’s planned to evaluate in 2020. Yet in a matter of days, it became a survival tactic, and the brand expanded curbside to over 300 units within two weeks.

Currently, it’s spiked into the double-digits of total sales, Guith says, and continues to hold. Improvements, like push-button arrival notifications, are on deck for 2021.

But a more recent change presents intriguing potential, long after COVID clears. McAlister’s is working on bringing tableside dine-in ordering to restaurants across the country. How it will work is customers who sign up for the app and loyalty program can sit down, order, enter their table number, pay, and wait for food to come out. No queuing up in line.

Amid all the off-premises pivots of coronavirus, this is something Guith believes can bridge the “new normal” and what McAlister’s has always gotten credit for from guests.

“Now, you put it into the time of COVID, when people want less interaction—they don’t want to stand in line, don’t want to touch screen; rather not touch anything,” he says. “You can go and sit down and order right off your phone. Great for anybody who wants that kind of interaction or more frictionless interaction.” Also great, he adds, for people with children (like Guith) who have tried, fruitlessly, to entertain them while waiting to get to the cashier.

“The thing is table service is not part of their model, it’s not how their guest generally interacts with the brand,” he says. “For us, this is our model. That’s always been our model. And so for us, I think it’s a little bit more of a natural fit.”

McAlister’s has piloted the platform “for a while now,” Guith says, and a broad roll out is slated for early 2021.

“It’s almost as if you had a digital waiter, if you will. You can pull out your phone, you order, and then you wait,” he says.

Feedback has been positive thus far in terms of “would I do it again, did I enjoy it,” Guith explains. Yet what’s been perhaps more alluring is the majority of guests said they would come more often. And half were new downloads.

“And that’s before we even got behind it from a promotional standpoint,” Guith says. “This was kind of a soft roll in terms of awareness at a small number of units, not a meaningful investment behind it, but really to say could we execute it and do guests like it? And the answer was overwhelmingly yes on both counts.” 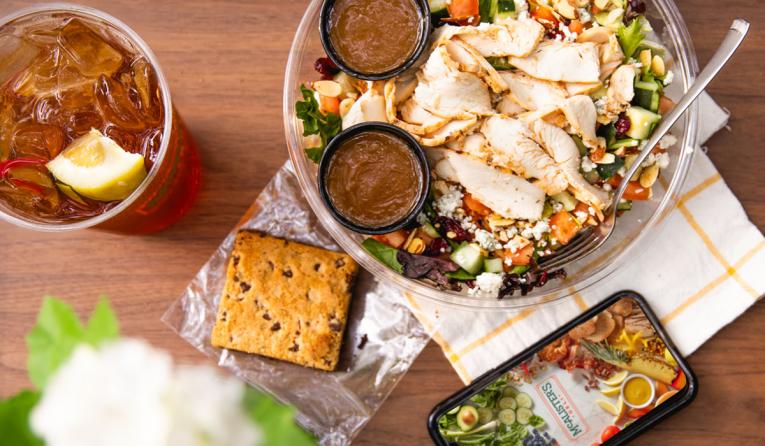 McAlister's revamped its loyalty program ahead of COVID-19—a move that has paid off in more ways than one.

McAlister’s loyalty relaunch can’t be understated, either. Guith says it was among the biggest internal issues operators asked him to fix when he assumed the president role in April 2018. He previously served as brand president of Cinnabon.

Before, McAlister’s platform was more of a surprise-and-delight one that actually turned off in 2019. The company decided to keep it dark until the new digital suite was ready to go.

Basically, a customer would get a reward based on if they came often, and spent enough. The “delight” would be whatever McAlister’s decided. “So a lack of transparency,” Guith says. “A lack of choice. Honestly, day one when I landed with the brand, I realized that was an opportunity.”

The program today mirrors more of what you see from top-tier quick-service brands, like Starbucks. A points-based setup where consumers hit certain tiers and can access specific parts of the menu when it comes to rewards redemption. McAlister’s didn’t need to reinvent the wheel with loyalty, Guith says. Just spinning it at the same pace was a major step forward.

And today, participation rates in McAlister’s loyalty program are tracking in excess of six times what they were pre-COVID.

In fact, the company’s app was ranked only behind Starbucks, Panera, and McDonald’s in Incisiv’s 2020 Limited Service Restaurant Digital Maturity Benchmark report. McAlister’s was fifth in customer engagement and service (Starbucks, McDonald’s, Dunkin’, and Chick-fil-A were in front).

The ranking put McAlister’s ahead of technology front-runners like Pizza Hut, Domino’s, and Chipotle.

It all connects, Guith says. McAlister’s digital transactions represented maybe a 10th of sales before COVID. Now, it’s close to 40 percent. The brand got out of “tablet hell” in 2019 and integrated third-party delivery into its point-of-sale.

“I can’t imagine what that would have looked like in 2020 had we not done that,” Guith says. “You literally would have had to have a person standing at the tablets all day punching in orders.”

Guith says he’s been pleasantly surprised by McAlister’s catering of late, too. The chain pivoted offerings, from addressing smaller occasions with deli kits and family meal deals, which are more B2C catering (not something McAlister’s focused on previously) to creating Choose 2 Box Lunches—a new option for the brand that starts as low as $8.49.

McAlister’s moved away from things like bulk salads and sandwich trays. The family meals and deli kits, targeted toward at-home group occasions, arrived in the spring. The box lunches are a more recent innovation, but one that’s picking up momentum, Guith says.

“Between that and even dine-in, I’ve been surprised. What’s great is we built now this much larger piece of digital business for ourselves,” Guith says.

The return of dine-in, as strange as this would have sounded before COVID, has been incremental for McAlister’s. It’s not cannibalizing the chain’s other digital pivots. And Guith believes mid- to late next year, the industry will see some level of return to normal when it comes to dining out. Given some recent openings have even set day one records, Guith is bullish about life after coronavirus.

"We have weathered the storm incredibly well," he says. "We’ve had positive net unit growth in 2020. And we have a very robust pipeline lined up for 2021. I’m excited about what the future is and we built very strong foundational elements. We’ve also come closer to our franchise community." 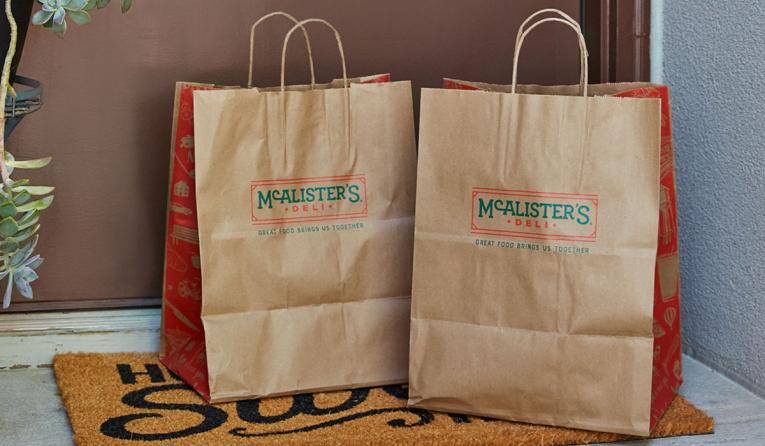 With delivery expansion came margin compression, naturally. McAlister’s worked to address that with pricing and its McAlister’s Delivers in-house program. Orders come in through its app and third-partners fulfill on the last mile.

Guith says he’s noticed interesting parallels to the hotel industry on this topic. Fittingly, FOCUS Brands’ new CEO, Jim Holthouser, appointed in February, hails from Hilton Worldwide. “There’s an analog there,” Guith says. “What happened at hotels when Expedia showed up, for hotels and airlines? All of sudden they relaxed, whoa, third-party marketplace. We need to take some of this back direct. So I think that’s where we are from a foodservice standpoint. We’ve woken up to how important this is and the demand from consumers, and there’s got to be a rebalancing.”

In a summer study from The Manifest, 65 percent of people said they turned to restaurant delivery during lockdowns. But a whopping 43 percent picked “individual restaurants” as their most popular outlet. DoorDash was next at 12 percent. “I think there’s rebalancing in building that infrastructure,” Guith says. Essentially, restaurants are scrambling to give customers that white-label option, which is both cost effective for consumers, guards the value perception for restuarants, and is also margin friendly.

Guith says check averages have been significantly higher through McAlister’s direct delivery. “Because we designed the experience differently,” he says. “We upsell better. We can feature our products in a different way that are more compelling."

And McAlister’s evolution will be reflected physically as well. When he started with the brand, pickup windows were seen as a design feature “some franchisees did.”

“But now everyone is doing that,” Guith says. “Most of our larger franchisees wouldn’t even consider opening without one now.”

McAlister’s expects to push the model even further as it grows in 2021 and beyond. As conversion opportunities pop up, it’s going to be something the brand wants to take advantage of.

Overall, though, McAlister’s wants to keep opening channels and improve customers’ experience with the brand, which Guith says will lead to better frequency.

“It’s interesting how some of these thing that we built, they didn’t dissipate or shift,” he says. “It was like OK, you built a whole new sales layer. Now you hang on to that and when other things start to come back, it’s incremental. Again, us being a dine-in concept and that being still significantly depressed from pre-pandemic levels, is very encouraging. Because I don’t know that it will ever come back to exactly where it was, but we definitely came back to higher levels than I thought we would by the end of [2020] and I think it will increase as we push through this next wave.”