The original Mighty Quinn's is located in the East Village of New York City.

For almost a decade, Mighty Quinn’s has broken tradition with the way it’s serving barbecue in New York City. The brand, created by pitmaster Hugh Mangum, along with his stepbrother, Micha Magid, and Micha’s brother-in-law, Chris Gourmos, lives in a fast-casual format, which has been a positive differentiator locally.

Even though Mangum grew up on the West Coast, barbecue played a big part in his life from a young age. Mangum’s experience started as a child when he traveled with his dad, who’s from Houston, throughout the country, stopping at various barbecue spots along the way.

Using his skills with a smoker and spice blends, Mangum found himself selling barbecue at Smorgasburg, a foodie flea market in Williamsburg, Brooklyn, in 2011. Quickly, lines formed and he was selling out faster than he could stock product. When it became apparent that a brick-and-mortar operation was the most viable mode for expansion, Magid and Gourmos came on board.

Instead of turning to a full-service format, though, the founders saw opportunity in limited service. Specifically, a setup modeled after one of the space’s true disruptors: Chipotle. Just with barbecue, not burritos, at the heart of the assembly line approach.

“When I was first doing Smorgasburg … and I would come on my way home, I would stop at the only place I could park the smoker and trailer and there was a Chipotle,” Mangum says. “Being totally candid I saw the way that line worked and it just got the wheels turning. The lightbulb moment was seeing a place, again throwing it to Chipotle, but seeing how they were able to efficiently run that line—it’s made a whole lot of sense. ”

He adds, “… as we were working the business plan it kind of it just made sense to get into the market in the fast-casual space and replicate that because no one had ever done it before. I realized when we were all speaking we could absolutely serve [barbecue] that way and it’s never been done before, so it made a lot of sense.” 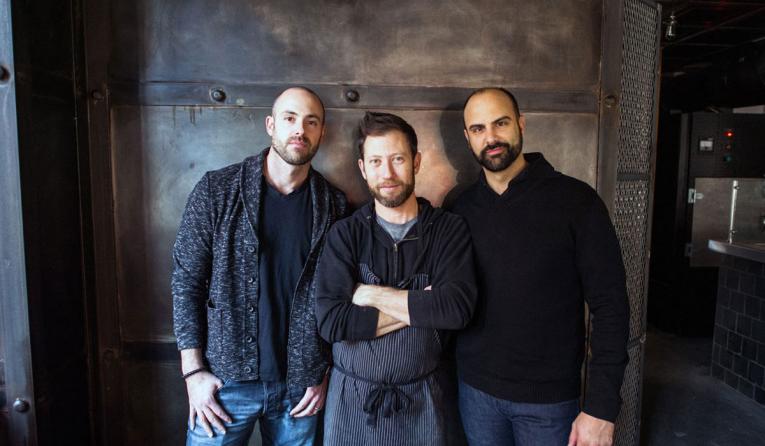 What Mighty Quinn’s is serving doesn’t strictly mirror the Carolinas, St. Louis, Kansas City, Texas, or any other specific region. Rather, it’s a type of barbecue Mangum calls “urban or New York barbecue.” And the Big Apple is the ideal place to craft a style that isn’t just another replication of a regional favorite, he says. The city is a melting pot from around the U.S., and the world, which allows chefs to have more flexibility.

“New York-style barbecue is something that I think we were essentially kind of the catalyst of. Us and a few other brands over the years, but we were kind of the lightning rod of the new barbecue explosion that happened a few years back,” Mangum says. “There’s nothing negative about being in Kansas City and doing that style of barbecue, but I think what makes New York unique is that we’re more progressive here because of the culture, because of the pace of the city, and because of the melting pot that it is. We just chose to embrace that and let that inflect in our menu in various ways, whether it’s the wings an edamame side we started out with, whatever it might be, and that’s what makes us New York.”

In a world where information about any topic is available with one click, culinary boundaries are disappearing. Chefs have the capability to create regional dishes, read about recipes and traditions, and order specific ingredients that wouldn’t have been available a couple of decades ago, Mangum says.

“For the longest time, information was not sitting on a supercomputer in our hands and you had to road trip to taste barbecue,” he says. “So, when I was a kid and I was tasting Tennessee, North Carolina, Texas, and Kansas City barbecue I actually had to go to those places. And you know recipes and/or information wasn’t available. I think that, obviously, with the information age you can place an order and have seasonings or sauces or any of those things delivered to your door step from any of these places.”

Mighty Quinn’s menu is small, Mangum admits. But it is intentionally simple. This allows the brand to focus on properly executing the smoking process. The menu includes classic and heavier sides like sweet potato casserole as well as lighter options.

“I think the beauty of what we do and why it works so well in the quick-serve format is because we don’t just serve heavy food. The beauty of it is for lunch you can eat at Mighty Quinn’s two times a week, three times a week and have brisket or pulled chicken, but you can have that with kale salad and some pickles as opposed to having to having it with mac and cheese or beans,” Mangum says.

“We’re the first ones who have cracked the code on how to serve really well slow-cooked food in a quick-service setting,” he adds. “I think that that’s one of the beauties of our setup. You’re not getting parboiled ribs just served quickly, but the hook is that Mighty Quinn’s is serving the first true authentic barbecue in a quick-serve because we were able to figure out how to manage the service line.”

Mighty Quinn’s caters to businessmen out for lunch as well as friends out on the town for dinner. Magid says, “I think one important differentiator of Mighty Quinn’s versus other barbecue restaurants is that the menu is very accessible. We have restaurants that are in commercial business districts that are primarily lunch markets where people are grabbing food and going back to their desks, and then we have spots like in the East Village that are more neighborhood nighttime kind of destinations, so I think that the menu has kind of proven we can cater to both of those markets. 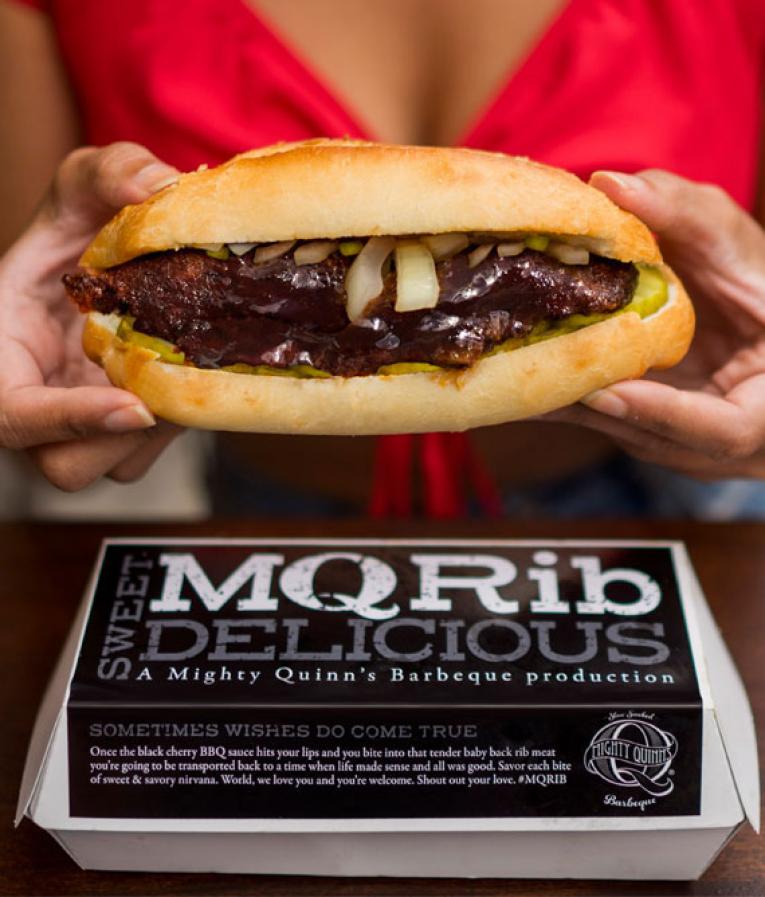 The MQRib special is made with smoked boneless baby back ribs with Boylans Black Cherry BBQ sauce and topped with kosher dill pickles and sliced onion.

A take a cult-classic

With a smaller amount of food items, Mangum is able to test and develop specials that rotate in and out of the menu. A current special, the MQRib, is a play on the legendary McDonald’s McRib feature. “We do seasonal changes of say one item, for example, the MQRib right now, which has been an awesome special. It’s been crushing it,” he says.

Even before Mighty Quinn’s was ever an idea, Mangum and Magid discussed a reimagined version of McDonald’s cult-favorite LTO and ways to put Mighty Quinn’s touch on it.

“I thought how cool would it be to take this and put our spin on it to make it real, make it with a real rib,” Mangum says.

“We wanted to kind of do our thing, kind of back to the New York thing,” Mangum says. “ … it’s our equal parts poking the bear and an homage to a sandwich that all of us have loved to hate and always look forward to seeing the billboard in a really weird kind of awful way.”

As far as consistency goes—a major challenge for barbecue brands considering the intensive preparation process—Mighty Quinn’s honed its operations to create a model and system that is efficient and easily replicable. That’s allowed the chain to think outside of the Big Apple, even outside of the country.

Mighty Quinn’s has partnered with various international restaurant groups to open franchise locations in Taipei, Manilla, and Dubai. And the success from these stores gave the company confidence to start franchising in the U.S. as well.

“When we saw we could replicate it in a different part of the world it made us think, given that there’s such a huge opportunity in authentic barbecue, especially in a fast-casual format, that there was a faster path to grow if we could find the right operators, the right franchisees in other local markets outside of our immediate trade area,” Magid says.

In addition to the international locations, Mighty Quinn’s operates nine corporate stores, along with a stand in Yankee Stadium.

“Basically, through expanding in the New York area, we tested and tried so many of our methodologies that we really perfected it in such a way that rolling them out to other areas, whether its franchising here or franchising overseas, the systems we’re in place as long as we have the infrastructure,” Mangum says.

The company will focus on expanding close to home in the first phase of franchising. Long Island, New York, is the first territory in the Northeast where a deal will be struck, Magid says. On January 11, the company announced it had completed a multi-unit deal with franchisee Jason Wotman to open three locations in Long Island. The first location is expected to open in late 2019.

The brand is considering partnerships with different types of franchisees.

“Our model is pretty unique and we can accommodate both single and multi-unit franchisees,” Magid says. “And single-unit operators can do very well having basically becoming the local barbecue restaurant of their region.”

Mangum adds, “Because the menu is small, there’s very little when it comes to multiple techniques. It’s pretty much two to three techniques [per menu item]. Then the meats are all smoked a certain way, so replication is really easy so long as those things are adhered to.”

While the focus for growth is in the Northeast, Magid says, the company isn’t turning away deals and is openly talking with possible franchisees everywhere from Los Angeles to Miami. The company prefers new locations to be close to New York so oversight is easier.

Mighty Quinn’s is already set-up for customers to navigate seamlessly, but it is always looking for ways to improve. Delivery and take-out are one of the sectors Mighty Quinn’s is focused on growing. A new app will help the company streamline online ordering and reward customers with a new loyalty program.

The new franchised locations will be built using a fresh restaurant model designed to handle all aspects of the business, including on- and off-premises dining.

“We have a new model layout that has multiple revenue centers coming into the restaurant: There’s dine-in, there’s catering, there’s delivery, and there’s also the bar side of the business,” Magid says. “So, we set up our service line such that we can run delivery and take-out service business in tandem with in-store dining and they don’t kind of get in each other’s way.”