Miller's Taps into 50 Years of Equity to Ignite Franchising

The brand bolstered its franchise offering with a store prototype and several tech solutions.

Miller’s Famous Sandwiches owners Gwen and Roger Graham Jr. are keenly focused on what’s necessary to propel the brand to the next level.

That's why after nearly 40 years of business as an independent restaurant in East Providence, Rhode Island, the third-generation operators decided in 2010 to open a second store in Attleboro, Massachusetts, about 10 miles away.

It’s a stark turn from those who came before them. When Henry and Ruby Miller first opened Miller’s in 1972, there were no intentions to take on more. With business progressing and customer demand holding steady, the couple remained content with making sandwiches in their one Rhode Island-based restaurant. The second generation, daughter and son-in-law Ruth and Roger Graham, took over in 1986 and kept the same philosophy.

But when Gwen and Roger entered restaurant leadership in the late 2000s, the duo found opportunities to leverage decades-worth of cult-like demand and fulfill a need for roast beef sandwiches without artificial preservatives.

In the years since that major decision, financial performance has proven them right. Same-store sales have increased in the past four years, and after pivoting during COVID, there still hasn’t been any declines.

That’s why franchising—for the first time in company history—is the logical next step, Gwen Graham says.

“The previous generations, they created something great, but we see something even greater,” Graham says. “We think now is time to pave the way for, we like to call it a better-beef [quick-service restaurant] segment. Five Guys did it at the time, right? When they created the better-burger market, they spearheaded that, and others followed in its path, but there is nobody right now really doing a good roast beef sandwich, and we know we have what it takes.”

Although it’s cliché, Graham says Miller’s will take a “walk before you run” mentality when it comes to franchise-led expansion. The chain refuses to enter hundreds of agreements and finish with a large number of sold-but-not-open restaurants. With that in mind, the plan is to open five to seven locations in the next couple of years across markets from the Northeast to Florida, including Boston, Charlotte, Raleigh, New York City, and Washington D.C.

Miller’s unique franchise offering starts with its menu, Graham notes. The brand serves six tons of roast beef each month out of its two locations, using certified angus beef that’s cooked low and slow overnight. The meat is sliced thin to order, which customers can see through the open kitchen layout.

The restaurant serves sandwiches with turkey, chicken, pastrami, corned beef, pulled pork, and lobster, but since opening 49 years ago, roast beef has remained the No. 1 seller.

“More often than not when people hear roast beef, they think Arby's, and ours is just better,” Graham says. “That's just my opinion. That's not anything negative about the brand. We think ours is better.”

The food, along with consistent service and experience, has delivered organic growth over the years. But not much has been done with brand identity, and the owners knew they couldn’t go to market without a polish. To strengthen its franchise potential, Miller’s partnered with design and branding agency Rugged Coastal to undergo a major refresh.

The finished product comprises bold orange colors and bright lighting across packaging, merchandise, and other touch points. The prototype features white tile on primary walls to keep the space open and light, and room for a mural or accent wall to indicate the brand’s playfulness. Other notable upgrades include wood flooring, overhead lighting above booths and tables, and a neon wall sign.

Additionally, the "Miller's" text went back to the original script style from the 1970s, and artists created “fun and whimsical” illustrations.

“The ultimate goal of those decisions is to really communicate to the customers—when they're in the space—the quality of the product we're serving, but also communicate the history of Miller's and our commitment to customer service that has led us to thrive nearly 50 years after opening,” Graham says. 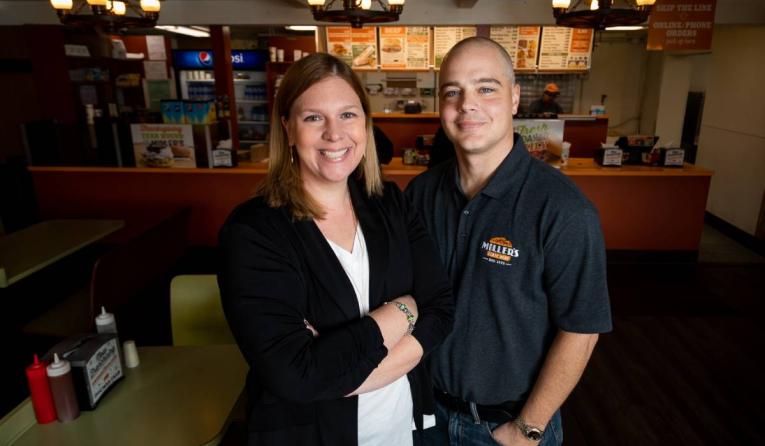 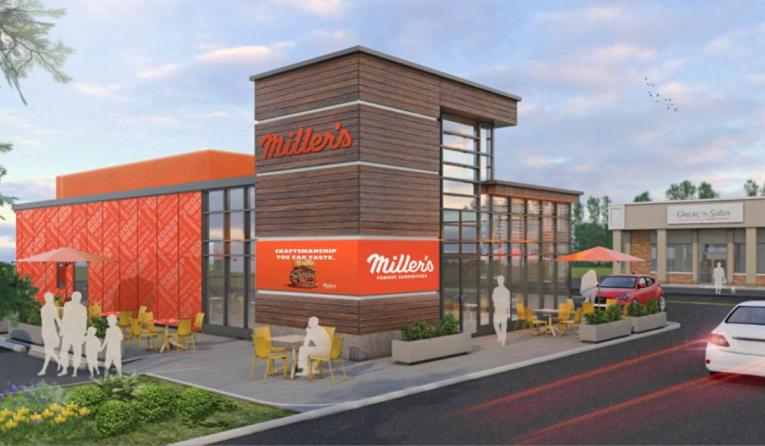 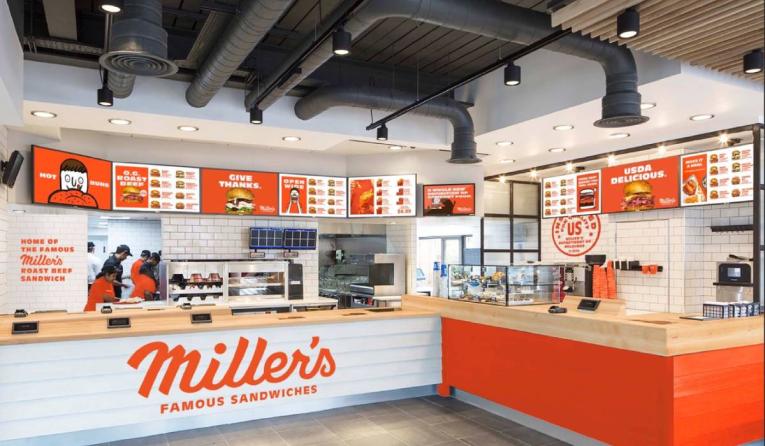 Inside the brand's refreshed store. 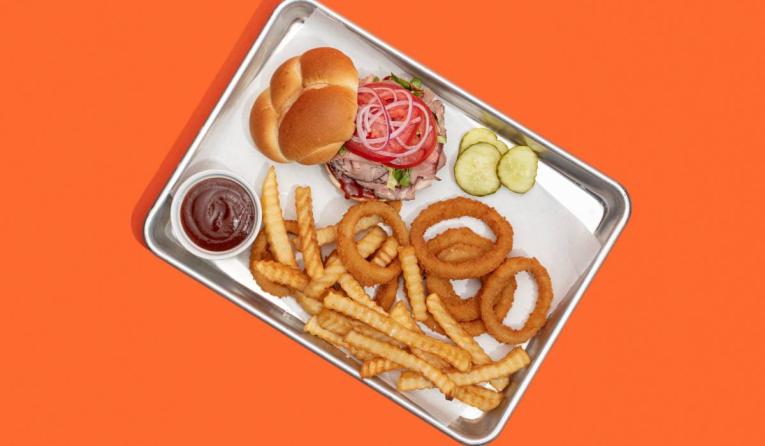 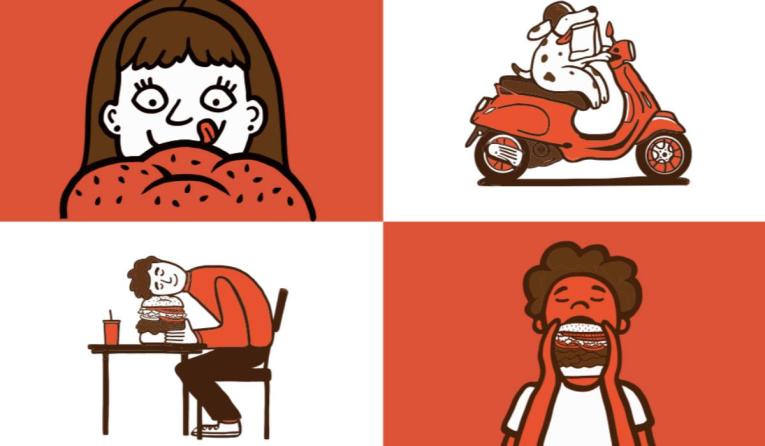 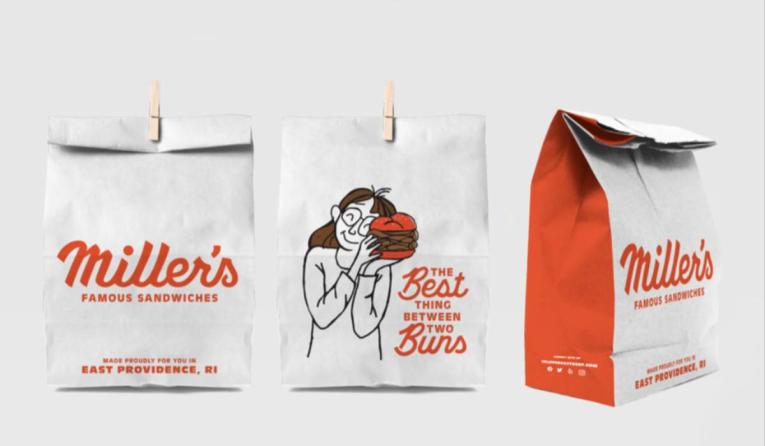 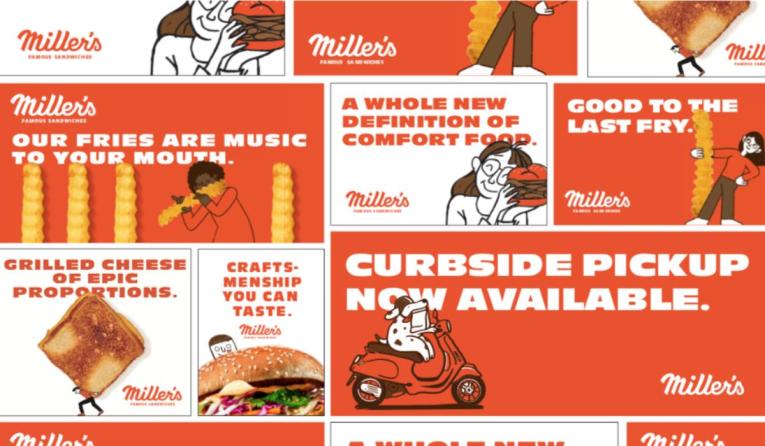 In addition to the brand refresh, Graham and Roger spent five years implementing tools to aid future operators, fueled by their background in computer information systems and her additional degrees in accounting and education.

One of the biggest investments was Jolt, a restaurant management platform. The software digitally monitors employee tasks, which helps workers adhere to brand standards and assists operators with identifying potential problems. The solution reduces training costs by using videos and pictures to explain techniques and utilizes automated temperature monitoring to prevent loss of inventory.

“This is just another level that allows more accountability within the store,” Graham says. “Everything that we do is with the end goal or result in how can this save us time, money, and increase brand standard adherence.”

From an ordering perspective, third-party delivery orders flow directly to the kitchen instead of employees monitoring multiple tablets, thus streamlining workload, minimizing errors, and increasing customer satisfaction. When those orders reach the back of house, cooks leverage upgraded equipment packages that create a more consistent product.

Technologies that facilitate employee recruitment and retention have been crucial, as well. Graham says prior to COVID, recommendations from workers or simply putting up a sign would lead to at least 20 applications. But that’s no longer the case, so Miller’s spent the past year developing a process franchisees can institute to stay ahead of staffing needs.

The restaurant uses a system in which interested individuals scan a QR code and are brought to a text conversation with an AI platform that helps applicants figure out what they’re best suited for and schedules a meeting with the manager. As for retention, Miller’s deployed technology that awards points to employees based on behaviors or goals tied to growing sales. For instance, one objective may be to sell a certain number of beverages.

“We're not understaffed,” Graham says. “We're an anomaly in the restaurant industry. We're not experiencing a staffing shortage in our stores. It takes a lot of time, it takes a lot of energy, and it takes money that you have to advertise now. We never had to advertise for jobs. We never had to spend money on technology to recruit people. But we do now.”

Graham says Miller’s wants franchisees who follow strategies and are financially capable, but the sandwich owner will also look for characteristics beyond what’s on paper; neither she nor her husband had restaurant experience before taking over, so they know it’s not a necessary requirement.

The Miller’s owners prefer candidates who love people and strive for continual improvement. When thinking about the perfect operator, Graham is reminded of Angela Duckworth’s “The Power of Passion and Perseverance,” a book that hones in on the power of grit.

Graham says the word completely encapsulates how Miller’s has thrived for almost 50 years and lays out how it will reach another five decades.

“It's really about what goes on in your head when you fall down and what you do to get back up again,” Graham says. “It has nothing to do with talent, has nothing to do with luck. You control your own destiny. I think the situation or state of your business life wherever you are, it's a direct result of those decisions and those actions really in a situation.”