With a new app, logo, and name, the popular fast casual wants to cement its status as a leader in Middle Eastern cuisine.
Web Exclusives | January 17, 2018 | Danny Klein

It didn’t take long for Paul Damico to recognize what made Naf Naf special. The former President of North America for Focus Brands arrived in June. To that point, Damico had never eaten at the 38-unit fast casual. After touring 14 Chicago-area locations, though, he realized what separated the brand also represented its greatest opportunity.

“It’s time to start yelling out to the community we’re going to specialize in Middle Eastern food,” Damico says.

On Wednesday, Naf Naf announced the completion of a rebranding project about six months in the making. And it starts with the concept’s name. Naf Naf Grill is changing to Naf Naf Middle Eastern Grill. Damico says this results from an all-too-broad definition of Mediterranean food in quick service. Given the swath of countries falling into the segment, guests can be overwhelmed and confused, Damico said. Naf Naf, however, doesn’t suffer from anything close to a culinary identify crisis.

This process began once Damico joined the brand. Naf Naf engaged Sterling-Rice Group out of Boulder, Colorado, conducted extensive consumer research, and started addressing a specific question: What does the color, logo, and brand really stand for?

What came back was exactly what Damico expected. Guests of the fast casual, founded by Sahar Sander and Elan Burger in 2009, turned out to be giant fans of Middle Eastern food, Damico says.

Above is Naf Naf's old logo. Below is its new one. 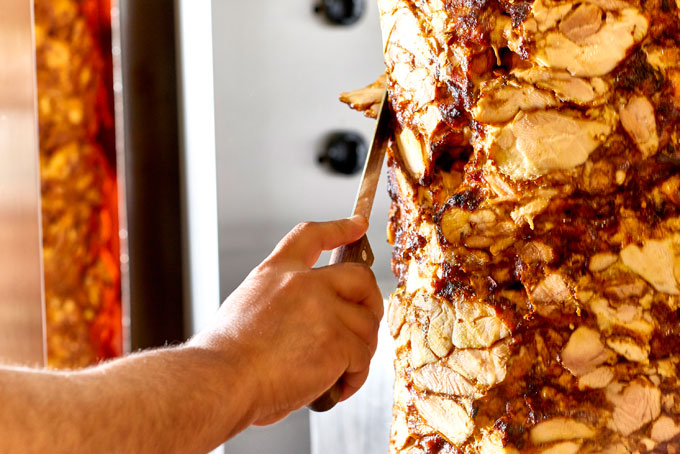 “When you think about Naf Naf, the [Hebrew] definition literally means to fan the flame,” Damico says. “So for us, it’s about fanning the flame of that discovery for consumers as they come into our restaurants to try our food. We want to be their guide to the best of Middle Eastern flavors.”

“Mediterranean concepts are getting very broad in the types of lettuces they’re bringing in; they’re almost becoming salad concepts in an effort to appeal to the masses and stay competitive,” Damico adds. “We’re going to keep staying narrow and really home in on our sauces, which are made from scratch every day, and our three core menu items that I think are the best around. That’s really what’s going to differentiate us.”

In addition to the new name, Naf Naf debuted a fresh logo, color palette, uniforms, and materials to reflect the changes, including disposables, paper goods, and so forth. Also, the rebranding coincided with the launch of Naf Naf’s new mobile app and rewards program.

The Naf Perks app allows guests to earn and redeem points for free food. It also enables them to order ahead and access special offers. The timing was deliberate, of course, as all imagery, web pages, and social channels flipped on Wednesday as well.

Starting with the new logo, instead of a camel resting inside a red triangle, the camel now stands prominently as part of the triangle. “The new camel is tall. He’s proud. He’s looking over the name Naf Naf, leading the way, not leading you away from it,” Damico says.

The brand is also turning from the reds and browns featured in the past. Instead, Naf Naf is embracing vibrant oranges and a mustard color inspired by the spices used on the menu. “If you lined up all our spices in their raw form, these are the colors you would see, and it really reflects Middle Eastern flavors in every way,” Damico says.

Another deliberate move: Naf Naf is making these changes as it closes in on a franchising program Damico says will launch in the second quarter.

“It’s almost a whole new rebirth of this brand, which has been so successful over the last nine years,” Damico says. “We’re putting a whole new level of energy and talent around this in preparation for our franchising efforts. We’re that ready to start doing this.”

Naf Naf is knocking on the door of major growth. In 2015, private-equity firm Roark Capital Group, which recently backed Arby’s blockbuster purchase of Buffalo Wild Wings, and has investments in Moe’s Southwest Grill and Focus Brands, joined the Naf Naf picture. Damico says the investment should allow Naf Naf to develop between 8–12 company-operated units per year in its current eight-market footprint (Illinois, Wisconsin, Minnesota, New Jersey, Pennsylvania, Michigan, Ohio, and the District of Columbia.) Franchising will expand this conversation much further.

When it begins, Naf Naf will have a more focused brand to leverage, Damico says.

“We’ve had a lot going on for six months,” he says. “We’re at a point now we’re it’s time to start rolling out and executing against all of the strategies we put into place.”