And why it might just spread to all of Inspire Brands’ concepts.

There’s little mystery why non-traditional restaurant development lagged in 2020. Outlets that relied on travel, like airports and train stations, or education hubs, such as college campuses, felt the weight of a pandemic-induced shift in patterns that kept people home far more often than on the road or walking to class. One of the non-traditional category’s stalwarts, Dunkin’, felt this pressure like anybody else.

Ahead of COVID, Dunkin’ had a “real-estate portfolio rationalization” on deck, a plan intended to set the U.S. system up for “continued strong, profitable future growth.” The scrubbing of Dunkin’s domestic asset base targeted about 8 percent, or 800 stores, but units totaling only 2 percent of 2019 systemwide sales. The pandemic further stressed many of Dunkin’s low-volume, low-profit restaurants due to a lack of drive-thru. And in that slice, came the removal of roughly 450 Speedway self-service kiosks as of fall 2020. In Q3 2020, Dunkin’ closed a net of 466 U.S. venues, 425 of which were Speedways.

For many franchisees, it enabled them to redeploy capital into the brand, either via NextGen remodels, new stores, or relocating others to higher-traffic spots.

By October, Dunkin’ was the prize in Inspire Brands’ largest acquisition to date, and the industry’s highest-dollar transaction since 2014. The Roark Capital-backed group acquired Dunkin’ and sister brand Baskin-Robbins for $11.3 billion, the most since 3G Capital LP, Burger King Worldwide Inc., bought Tim Hortons for $12.64 billion in August 2014.

In the wake of the deal, as much as Dunkin’ had reason to push toward drive-thru—70 percent of its traditional fleet and more than 90 percent of restaurants in newer markets feature them, and those units generated double-digit comps growth in Q3 of last year—non-traditional was always going to be part of Dunkin’s COVID bounce back and go-forward identity under Inspire.

READ MORE: Where Dunkin' stacked up in this year's QSR 50

Dunkin’ opened 27 non-traditional units in 2020, despite the obstacles, including airports in Boston; San Antonio; St. Petersburg-Clearwater, Florida; and New York City. Additionally, the brand developed retail restaurants in the Mall of America, American Dream Mall, and a Shop Rite Supermarket in New York, as well as Air Force Bases in New Mexico and Utah, and on campuses at the University of Maryland and University of Massachusetts at Dartmouth.

Over the first half of this year, Dunkin’ expanded across Las Vegas with locations at the Convention Center, LINQ Hotel, and Arizona Charlie’s Boulder Casino. It opened its 12th location with Great Wolf Resorts at the Manteca, California park, and debuted at the Oak Hill Hospital in Brooksville, Florida, and UMass Memorial Medical Center in Worcester, Massachusetts. Dunkin’ plans to focus the remainder of its 2021 nontraditional calendar within New York’s JFK Airport in Terminal 1 and Chicago’s O’Hare Airport in Terminal 5.

Chris Burr, Inspire Brands’ director of non-traditional development, says this strategy has been an essential element of Dunkin’s growth story for over a decade. COVID might have stalled that, but it hardly altered it.

“From an overall Dunkin’ perspective, we’ve always had a modernized experience because most of our customer base is on the go anyway,” Burr says. “And they crave quick and easy access to our menu items. One of the great things about our model is that it can be scaled and offered in many different formats and sizing, allowing us to dominate in non-traditional outlets.”

Dunkin’s non-traditional arm continuously responded to the pandemic. It created a tiered menu and offered operators flexibility. For instance, there was an “essentials” offering and an “essentials plus” lineup. Both allowed restaurants to flex for labor and supply challenges.

Naturally, however, Dunkin’s non-traditional recovery was always going to be tied to consumer mobility in these settings. And as airports and other outlets started to glimmer back to life, Dunkin’ was one of the first brands back up, Burr says. The reason being it’s a portable product with disposable packaging that hangs its hat on convenience. In other terms, Dunkin’ guests didn’t have to wait for a pivot to meet their needs. At the airport, somebody could grab a coffee, or a bite to eat, and retreat to a corner away from people, Burr says. Dunkin’ didn’t have to reconfigure dining rooms for social distancing or ask diners to sit down. Consumers kept their distance in line and moved on.

“The Dunkin’ model, as things started to recover, really performed well from that perspective,” he says.

Not to mention, consumers could mobile order and avoid contact altogether. In the early days of COVID, more than one in five Dunkin’ transactions flowed through a digital channel, with on-the-go mobile ordering representing 8 percent of all transactions. There just wasn’t a massive effort needed to educate guests on how to keep safe and still get their coffee.

One thing about nontraditional as well is that dayparts stayed fluid. At typical stores, especially drive-thrus, Dunkin’ saw its business shift later into the day thanks to work-from-home prevalence and old habits getting spun in the COVID blender. In recent months, coffee has become as much of a break occasion for guests as a routine one. It’s one reason cold beverages have surged (74 percent of beverage sales in Q3 for Starbucks).

In the nontraditional arena, though? There are airport employees getting breakfast at 8 at night. Schedules don’t peak or shoulder as much, Burr says. And Dunkin’ found an ideal role delivering service there.

“We’re certainly bullish as travel starts to resurge and our key focus is around travel related to airports, train stations, travel centers, higher education,” Burr says. “Airports continue to be one of our main priorities.” 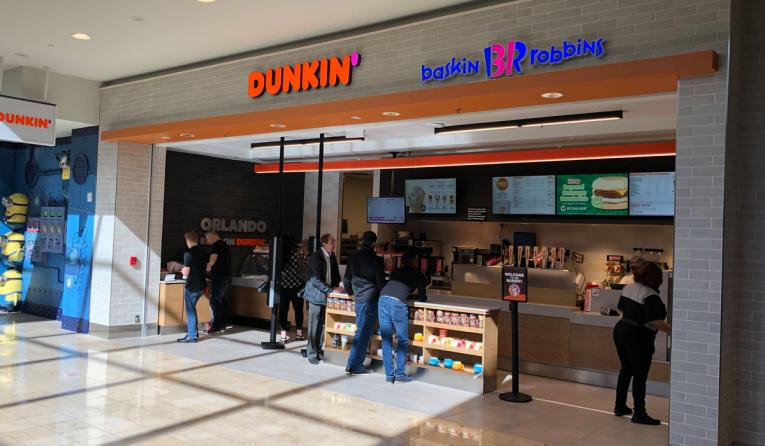 Dunkin' has been a non-traditional leader for well over a decade.

With the Dunkin’ deal and its 12,800-plus locations (about 10 percent of which are in non-traditional sites), Inspire widened its portfolio to more than 31,600 restaurants in 60-plus countries, with $26 billion in annual systemwide sales. It employs 600,000 company and franchise team members, 3,200 franchisees, and more than 25 million loyalty members.

Just as it does with Arby’s, Buffalo Wild Wings, Sonic Drive-In, Jimmy John’s, and Rusty Taco, Inspire operates Dunkin’ and Baskin as distinct brands. But as CEO Paul Brown outlined from the outset (Inspire was formed following Arby’s $2.9 billion purchase of Buffalo Wild Wings in 2018), the company started in the hotel mold. Brown came to Arby’s from Hilton Worldwide.

From a high level this meant creating a framework where Inspire could drive concept value from within a multi-branded portfolio, or independent entities that pull from a center of strength.

Put another way, Inspire backends a focused, integrated model, things like HR, finance, legal, IT, and communications, and lets each brand rely on the resources of the other. Picture a hotel organization spreading out like a web from a base of power.

Inspire, in particular, spread acquisitions across a full spectrum of restaurant occasions. The end result being a group that not only touts benefit of scale as a means to save cost, but something that can unlock outside investments in long-term growth initiatives.

The Dunkin’ deal, in turn, gave Inspire a coffee, snacking, morning leader to complete the circle of a consumer’s journey: Arby’s/Jimmy John’s for lunch, Buffalo Wild Wings for dinner, and Sonic Drive-In for a night-cap. They all operate in distinct sectors, with colloboration taking place behind the scenes from a resources standpoint.

Part of that is less tangible than occasions themselves. Jimmy John’s delivery is one pool of knowledge Inspire pulled from. Sonic’s marketing and tech integrations. Buffalo Wild Wings loyalty. Now, Dunkin’s non-traditional muscle.

“If a concessionaire is responding to a [request for proposal] for a higher-education location that wants coffee, wants deli, wants [quick service], wants chicken, we can bring that portfolio and help fill out the needs of the entire RFP with a one-stop shop.”

Burr says it’s a powerful tool for Inspire going forward and one that’s going to factor in. Outside of Arby’s and its travel center presence, there’s ample whitespace to tackle.