The fast casual is designing a footprint that can grow now, and on the other side of the pandemic.

Based on where Noodles & Company was headed in early 2020, COVID-19 trends didn’t feel all that foreign. Sure, there were some unusual shifts, like the fact more people picnic in their cars than public places these days. But the majority simply represented an acceleration of initiatives Noodles & Company invested in before the curtain fell on dining rooms. And as many quick-serve restaurants can attest, the pandemic compressed the innovation cycle; it didn’t exactly reinvent it.

Before the onset of coronavirus, off-premises grew to 60 percent of Noodles & Company’s sales mix. Its food traveled well relative to competitors. Menu variety resonated with younger demographics and families who gravitated toward the occasion.

Yet there remained opportunity held back by friction. Of that 60 percent figure, 10 percent represented delivery. So half of Noodles & Company’s transactions were guests coming into the restaurant, waiting in line, and then waiting again for food. Even if they ordered digitally, they’d need to park and hop out.

“From an optimal guest experience, there was 50 percent of our sales we felt could be significantly improved from a guest experience perspective,” CEO Dave Boennighausen says in an interview with QSR.

There was a lot of digital whitespace to gain well before a global crisis arrived. And a few initiatives have started to churn for the 1995-founded fast casual.

One is something Noodles & Company actually started to implement in new restaurant designs a couple of years ago. But it didn’t gain prominence or coverage for the straightforward reason the company wasn’t growing all that much.

Noodles & Company had 532 restaurants on January 3, 2017. By October 2019, there were 458. Retraction kicked in in April 2017 and slowly slid that direction leading up to this year. In Q3 2019, however, Noodles & Company opened four company restaurants that performed better than any class in 15-plus years. The ensuing quarter, it debuted a unit that produced one of the chain’s highest opening sales days in history. It led Noodles & Company to guide 5 percent unit growth systemwide starting in 2021, with potential acceleration to at least 7 percent in the years beyond.

Despite a COVID-19 pause, Boennighausen says Noodles & Company maintained most of its existing pipeline that was already in development. While it might not hit that 7 percent mark next year, it should near annualized figures that match the projection in the latter portion of 2021.

And here’s where the recent design change is going to drive unit growth and potential. The six restaurants that opened in 2019 or 2020 achieved average-unit volumes 14 percent above Noodles & Company’s corporate average. They’ve also hit impressive restaurant-level margin of 19.4 percent, even with some pandemic setbacks.

The main feature: Many of these include an order-ahead, drive-thru pickup window—a detail Boennighausen says will be part of at least 70 percent of new units in Noodles & Company’s pipeline.

It behaves very similarly to Chipotle’s “Chipotlanes,” where customers order ahead—typically digitally—and then drive up and through when it’s time to pick up. To Boennighausen’s earlier point, this is something that not only fits today’s social distant dynamic, but it directly addresses a pain point that hampered roughly half of Noodles & Company’s off-premises business before.

There’s another metric Boennighausen points out related to pickup windows. Just a couple of weeks ago, Noodles & Company brought a Minnesota location to market with the feature. The average transaction time was just a minute.

“That really changes the game when it comes to fast casual for convenience,” he says.

"You will see us over the next several months become more aggressive in terms of identifying sales opportunities, identifying growth opportunities from the franchise side," says Dave Boennighausen, Noodles & Company's CEO.

The nature of COVID-19, and how it’s spotlighted digital strengths, opened the aperture for Noodles & Company to reimagine it store designs and future growth.

Boennighausen says the company anticipates meaningful disruption in the real estate arena for restaurants in the coming years. And Noodles & Company will be poised to take advantage with a more efficient, off-premises-oriented footprint.

He referenced the “many proof points,” coming into focus. For instance, in Q2, Noodles & Company had 50 company restaurants with annualized volume above $1 million flowing solely from digital transactions.

“As you can imagine, that provides us greater confidence not just in reduced square footage in general but, additionally, in the potential to test extremely cost-effective build-outs that only incorporate off-premise and/or digital sales,” he said during the company’s quarterly review.

How it could unfold: Traditional Noodles & Company restaurants, only closer to 2,000 square feet than 2,600, complemented by a pickup drive-thru window. Then, a gamut of restaurants that are potentially off-premises only, whether it’s digital-only, or just a drive-thru pickup window with no lobby. “We feel that there is a spectrum of real estate opportunities that, as we look four or five months ago, we maybe didn’t realize we had quite as many opportunities as we now do think we have in terms of some of the trade areas and how we can service guests in a wide variety of manners,” Boennighausen added.

Pre-virus, there were a lot of trade areas Noodles & Company’s left off the radar. Chipotle has made similar comments lately as it’s pushed further into drive-thru windows as well. Landlords are rethinking tenants. Restaurants are reconsidering the ROI of traditional boxes.

READ MORE: Check out the Shake Shack of the future, complete with three drive-thru lanes

It’s mostly going to be new growth for Noodles & Company. Boennighausen says, at most, perhaps 4–5 percent of its current footprint will retrofit pickup windows. “But what we will look forward to, though, is as we eventually start testing less square footage that potentially opens up more opportunities in the long term for relocations to much smaller square footage sites that are maybe better positioned in the trade area,” he says.

Today, 380 of the brand’s units are company-run. Only 76 are franchises. The mix has looked that way, more or less, for going on seven years.

In November 2019, Boennighausen said Noodles & Company “absolutely believes” the franchise model will represent a larger part of its growth. He said the brand was conservative to date due to the “tremendous upside with our prototype,” especially in regards to labor initiatives.

“… we firmly believe that Noodles & Company has the inherent strengths necessary to become one of the premier growth concepts in the restaurant industry,” he added at the time, noting growth would first center on current markets, like Chicago and the heartland, as well as Colorado, and that 15 of Noodles & Company’s areas boasted 10 or fewer restaurants. Nine had five or fewer.

Franchise growth, however, is where a lot of the new market growth will take form.

In the near-term, as the industry battles out of the COVID-19 trough, Boennighausen says to expect more company dominated expansion than a longer-term growth equation.

“That said, our franchise community, which we’re very proud of and very pleased with their performance, they’ve shown a great amount of interest and potentially also being some of the test vehicles for some of the lower square footage profile,” he said. “So there are indications that we might be able to have a good solid mix of company and franchise growth.”

On the landscape itself:

Noodles & Company’s “Kitchen of the Future” refresh, which centered on labor savings with new equipment capable of improving speed, flexibility, and holding temperatures, was back-tracked by COVID-19 after promising early tests.

While certain elements were delayed, Boennighausen says Noodles & Company now anticipates expanding the most alluring elements, such as the introductions of steamers to improve the throughput and efficiency of its cook line, in Q4 and into 2021. 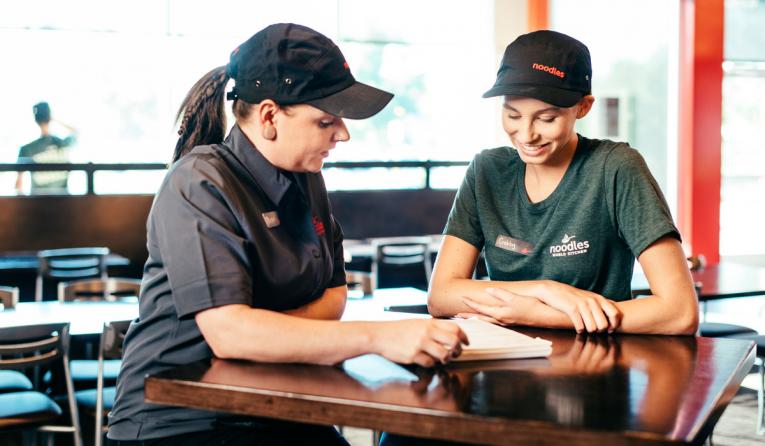 Today, Noodles & Company's average restaurant GM has been with the brand for five-and-half years. That’s an improvement of 15 months from just two years ago.

The company was leaning into a digital focus for some time before the pandemic. Last fall, it introduced a new rewards program featuring surprise-and-delight capabilities. It’s risen to 3.3 million members as the number of daily signups continues to spike amid COVID-19.

Alongside rewards, the company upgraded its entire app user experience. It removed bugs and quickened the flow and customization capabilities.

But the data is the true unlock. Noodles & Company has been able to target specific messages and promotions based on guest behavior. However, it remains early innings in terms of really creating the ability to leverage information to engage with every guest, Boennighausen says.

Noodles & Company wants to evolve to where it can do more than surface new news, he adds, but also make sure it can tailor to specific needs. Boennighausen highlights Starbucks as a case point—where the company has the capability to push promotions, like pumpkin spice, and adjust to customers who don’t respond as well as to those who want more. “We can be much more surgical,” he says. “… It’s really just continuing to get the data architecture right to where we can throttle and push different types of messaging based on different aspects of that guest.”

Noodles & Company has shown consistent sales recovery in recent weeks. Average-unit volumes, normalized for the impact of temporary closures, were nearly flat, year-over-year in July. Here’s a look at the growth of late:

Boennighausen says Noodles & Company was fortunate to enter the pandemic with about 85 percent of its restaurants featuring sizable patios. That’s been the focus lately.

Noodles & Company was one of the first chains to shut its dining rooms March 16. It was comfortable making the call, Boennighausen says, due to its digital suite and heavy mix (which grew 135 percent to 74 percent of sales in Q2). It then became a process of getting average weekly sales up and meeting customers where they wanted to go. Noodles & Company put up curbside and has continued to refine the program.

Throughout COVID-19, Boennighausen adds, the brand has led with a people-first approach. It never instituted pay cuts on the restaurant-level side—only at the corporate and field support tier. Ten percent of the central support office was furloughed, with another 20 percent reduced to part-time. But Noodles & Company kept medical benefits going for all those workers.

Boennighausen says one of the critical notes has been retention, especially for GMs. Today, Noodles & Company's average restaurant GM has been with the brand for five-and-half years. That’s an improvement of 15 months from just two years ago.

“This bodes extremely well for our ability to maintain our momentum and successfully execute our growth strategy,” he says.