Panera Bread Wants to Be Everywhere

In recent months, Panera Bread has announced several new initiatives aimed at expanding its reach—efforts that will continue to unfold as Panera works to get into more locations and serve more customers at more occasions.

“This brand has an incredibly high emotional connection with our target customers,” says Dan Wegiel, the company’s EVP and chief growth and strategy officer. “That’s something that is a massive asset for us and we want to keep them.”

With a wide appeal among consumers and deep relevance among loyal fans, Panera executives see plenty of runway for future expansion and an abundance of opportunities to further ingrain the brand into customers’ daily lives.

Much of the brand’s recent evolution has occurred since JAB Holding Company acquired Panera in 2017 for $7.5 billion. Since then, the fast-casual giant has made big news: In April, it rolled out a new slate of breakfast menu items aimed at winning share from competitors who frequently offer frozen, microwaved food items during the breakfast daypart. That effort included a revamped coffee program that mirrors the quality and technology available at big coffee houses. In June, the brand launched a test of a dinner menu that includes artisan flatbreads, bowls and hearty side items like sweet potato mash. And just in late August, Panera turned more heads as it finally embraced third-party delivery partners after years of sticking with its in-house delivery program.

So, what do the collective moves tell us about where Panera is going?

“The strategic thread that holds all those things together is this: this brand has a very unique opportunity in our minds in the food and restaurant space to have broad relevance to a fairly broad set of target customers,” Wegiel says. “It’s one of the few brands that operates across all dayparts, all week parts and multiple channels of access.”

While those changes came after JAB’s acquisition, he says, the European conglomerate empowered those efforts, not mandated them.

“JAB has a very explicit and clear philosophy that they believe individual companies and brands should really shape their destiny and destination,” he says. “Unlike some other investment firms they don’t come in with a playbook and say here’s how you can create value or say here's the portfolio and here’s where we can create synergies …That’s very much the antithesis of how they operate.” 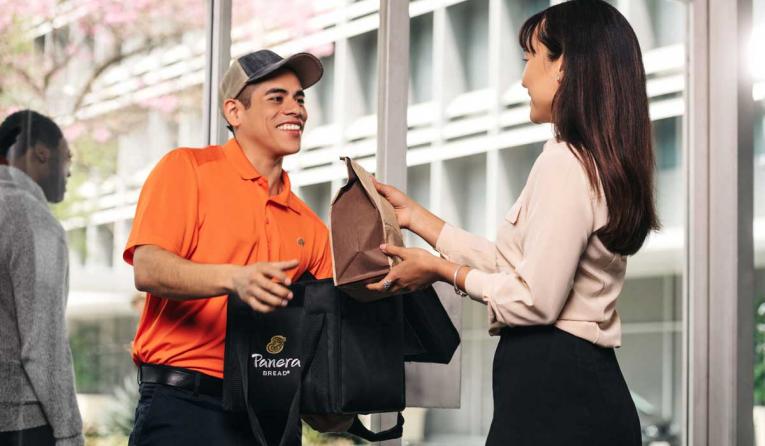 Still, Panera has had been able to lean on the expertise of sister brands under the JAB umbrella—and vice versa. The company owns several coffee concepts, including Peet’s Coffee and Caribou Coffee. That was useful when researching ways to revamps Panera’s coffee offerings, Wegiel says. Even so, JAB urged Panera to strengthen its self-branded coffees, not adopt the banner of another JAB brand.

Moving forward, Panera wants to create more access points into the brand. To that end, the company will expand traditional and nontraditional stores. Wegiel wouldn’t share specific store growth projections but says there is “ample room” to add both international and domestic units. Likewise, Panera will go deeper on its lines of consumer packaged goods. Customers can currently find salad dressings, soups, breads, and coffee in grocery store aisles. But the brand thinks it can expand both the number of products and the number of distribution points.

“CPG in our minds can be a significant lever of new growth,” he says. “I think we’re just scratching the surface.”

Panera has long been a holdout when it comes to the third-party delivery services that have transformed much of the restaurant space. The company has offered in-house delivery for years. But in late August, the chain announced new partnerships with DoorDash, Grubhub and Uber Eats that expanded delivery choices across 1,600 of its 2,300 or so stores. The brand believes adopting those services will help recruit new customers.

“We’ve been in delivery for the better part of five years,” Weigel says. “We realized and heard from the aggregators that there was an entire segment of customers that wanted Panera, but their primary source or delivery was the aggregators and we weren’t there.”

Whether in delivery, a reimagined breakfast menu or CPG options, Panera is working to reach customers across multiple dayparts and occasions.

“We know there’s tremendous demand for the brand, some of which is very pent up,” Weigel says. “There are areas consumers want us where we’re not.”

“While they might be able to have some incremental business at dinner time, it's never going to be overpowering. Once these brand identities are established and known, it just takes forever to move the needle.” — John Gordon, principal and founder of Pacific Management Consulting Group.

While Panera accelerates change, don’t expect any wholesale transformation. The company plans to stick with its core brand identity that focuses on clean ingredients and wellness, while also holding onto its more indulgent bakery and menu items.

“Wellness is not just about eating healthy. It plays a role ... Someone who is trying to eat well is usually trying to balance things,” Wegiel says. “We offer optionality because wellness is about completeness in the balance of fulfillment.”

Some of Panera’s moves—like the reimagined breakfast and coffee program—look more routine than transformational to John Gordon, principal and founder of Pacific Management Consulting Group.

“Every good operator should be doing that,” he says.

He views Panera’s flirtation with dinner, though, as a bolder move. He recalled the brand’s 2006 introduction of the Crispani, a handmade pizza product available only in the evenings. That offering was meant to push the brand further into the dinner daypart but low sales caused Panera to pull the pizzas in 2008.

“It’s just tough because Panera was known and still is known as a soup, salad, sandwich and breakfast place,” Gordon says. “Dinner is a substantial daypart for them, but not the top of mind daypart.”

To ramp up evening sales, he believes Panera must launch a flagship dinner product. But he thinks the brand’s bakery-cafe identity will remain intact.

“While they might be able to have some incremental business at dinner time, it's never going to be overpowering,” he says. “Once these brand identities are established and known, it just takes forever to move the needle.”

Like all privately held concepts, Panera’s financial performance is tough to ascertain since its purchase by JAB. But Gordon says the brand still looks strong. It’s a proven operator with a widespread appeal. And Panera enjoys white space to grow its footprint domestically and internationally.

“They have solidified their position in the United States in the last 10 years without a doubt,” he says. “I have a lot of respect for Panera as an operator. In many different restaurant brand surveys, Panera shows up very high and it has a very strong company operation and franchisee operation.”