The fast casual is out to change the beverage game.
Web Exclusives | February 27, 2020 | Danny Klein

Panera believes consumers shouldn't have to worry about price when it comes to quality.

“Because, in all honesty, we are the only concept that can do this,” she says.

Panera launched Thursday a nationwide coffee subscription program it says is the first of its kind ever attempted by a national restaurant company. Burger King introduced a $5 test in March 2019 where BK app members could sign up for a small cup of coffee each day. There are some key differences, however, Burnett notes, that puts Panera’s initiative on solo ground.

Firstly, it’s unlimited. Customers can show up every two hours. If they’re in-store, they can fill up as much as they want. Also, it doesn’t matter if they want a large, small, or walk in with a 32-ounce mug from their office. Panera will fill it, over and over, every day, for $8.99 per month.

The deal also includes iced coffee and tea. “I think the spirit of this is one of pure generosity,” Chaudhary says, noting the sustainability aim of Panera not giving away new cups every time.

Called MyPanera+Coffee, it’s one of the boldest initiatives Panera has ever rolled coast to coast and has the potential to completely alter its traffic patterns and the way restaurants view loyalty, Burnett says

The deal is exclusive to MyPanera members, of which there are 38 million today. The option went live Thursday on the chain’s app, with QR code, in-store sign-up arriving Monday.

Currently, more than half of Panera’s total transactions across all dayparts stem from MyPanera members. Burnett says the coffee subscription program could revolutionize that mix since it’s not the typical earn-and-burn model you see throughout the industry, where you spend x and get y. “It’s actually about providing true value to the guest that really actually matters to them. Especially things that are part of your daily ritual, like coffee,” she says.

To capture the potential at hand, Chaudhary ran through some test results. Panera piloted the program at 150 restaurants for more than three months. Several metrics stood out.

No. 1, Panera saw frequency jump by more than 200 percent for customers after they signed up compared to before. That generated a significant rise in footfall, he says.

Next, Panera witnessed a 70 percent increase in food attachment for subscribers, something Chaudhary called “staggering.” Essentially, Panera guests, drawn by the frictionless coffee convenience, started buying food once they showed up. That’s a critical part of this, he adds, considering Panera spent the last year revamping its breakfast offerings in hopes of pushing more business into the occasion. This included three new breakfast wraps, a fresh line of hot coffees and stations where employees grind beans in house, and a revamped bakery line with 10 added items. 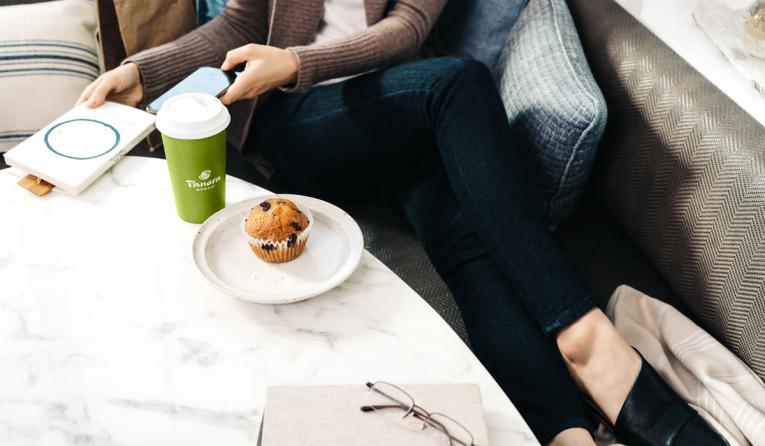 Can Panera drive more guests, more often with the program?

Today, 75 percent of Panera’s business takes place after 11 a.m. It’s 10–15 percent around standard breakfast times and another 10 percent between breakfast and lunch.

Burnett says value was in the “double-digits” from a food perspective from the attachment.

Another alluring result was the fact close to 75 percent of coffee redemption occurred off-premises. When Burnett underscored why Panera is better positioned to launch a subscription program than anybody else, this was a critical reason why. “We’re the only people who have the coffee and food,” she says. “We’re the only ones who have an ecommerce platform that’s robust enough to handle this along with omnichannel ways for you to get it. So whether it’s Rapid Pick-Up, drive thru, delivery, or on-premise. And we’re the only one with a loyalty program to really enable it.”

Panera expanded its menu to capitalize on convenience and to-go back in 2012, which feels like ages ago in this off-premises restaurant rush. Digital assets got an upgrade, too. By 2014, Panera was testing delivery with its own drivers (outside services also covered 7–14 percent of restaurants). This past August, when the company announced it was bringing on aggregators, it estimated it had delivered more than 28 million orders, or 7 percent of overall sales.

Panera’s 38-million-member loyalty program, which connects across channels, is among the largest in the business. For perspective, Starbucks has 18.9 million active U.S. members.

And there’s reason to believe the coffee subscription feature will balloon this figure even further. In the pilot, Panera saw about a 25 percent increase in new MyPanera members asking for the deal. And a vast majority of those were new to the brand, meaning it actually drove light users into restaurants. “It is a really, very interesting a desirable value proposition for the guest,” Burnett says.

Panera also picked up one additional insight, which Chaudhary said is “perhaps the most important.”

Guests can sign up for the program month-to-month currently. Other options, like semi-annual, will likely be introduced later on. But thus far with the current model, Panera is enjoying a 90–95 percent renewal rate each month, “which is fantastic,” Chaudhary says.

Guests coming in more often, buying more food, driving off-premises orders, and renewing. Together, “it gives us a ton of confidence in the business model,” Chaudhary says. 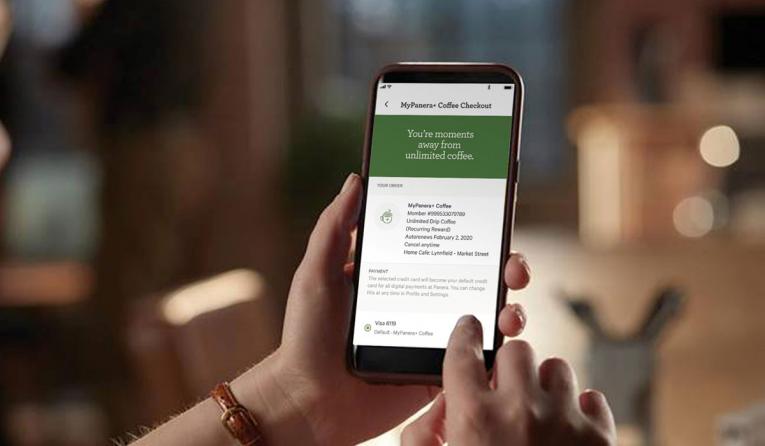 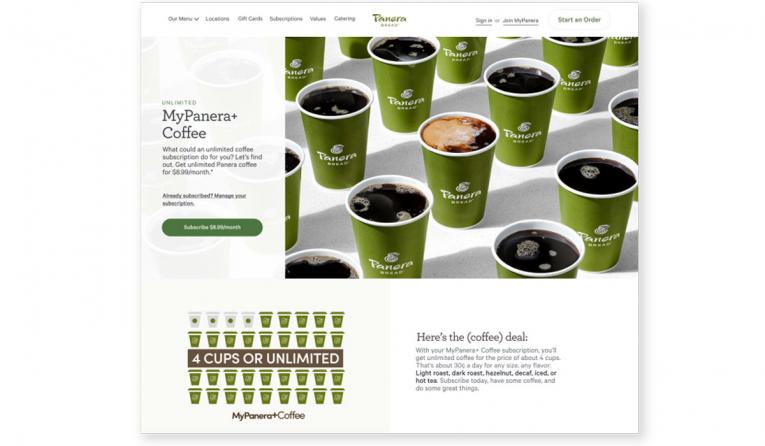 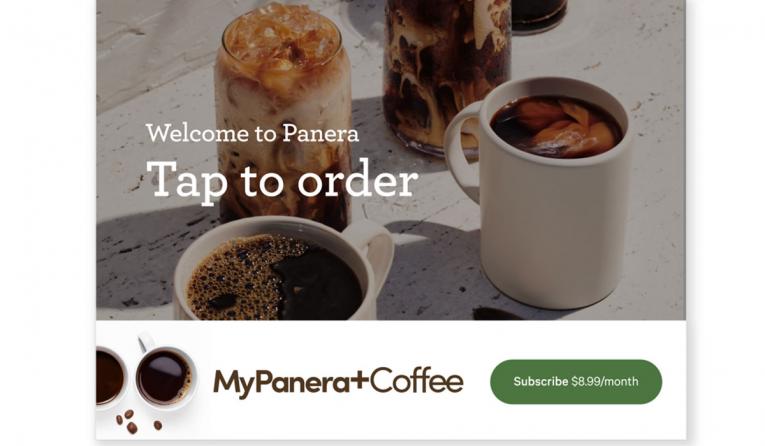 According to a report from Acorns, the average American spends $1,100 on coffee per year. So, by Panera’s math, subscribers could save nearly $1,000.

That’s really the kicker, Chaudhary says, and the inspiration.

More than 160 million adults drink coffee every day, but nearly half are conflicted because of what they spend, per The National Coffee Association’s 2019 Data Trends Report.

Panera is supporting the launch of MyPanera+Coffee with an integrated marketing and creative campaign, Your Cup is Always Full, which includes digital, TV, radio, OTT, Out of Home, and more. The tagline is already trademarked.

And speaking to the earlier note around Panera’s renewed breakfast efforts, the program will fuel tangible progress, Chaudhary says.

One of the first things the parties discussed, according to reports at the time, was the branding of Panera’s coffee. Rather than simply agreeing to a licensing deal with one of its coffee giants, JAB encouraged Panera to lead with its own brand. That led to cold brew, the coffee stations, and thee fresh blends—a new light roast that’s a combination of Central and South American beans with hints of citrus, roasted nuts and chocolate; and Dark Roast, a blend of Costa Rican and Colombian coffee beans that give the slightly sweet coffee a rich, mellow finish.

The two new coffee blends are freshly ground every day and made from 100 percent Arabica whole beans.

But while that felt like a catch-up move, Panera’s subscription program is something else entirely.

About 50 percent of the coffee redemption is taking place around breakfast. In turn, the food attachment is weighing heavy in the breakfast direction. And generally speaking, breakfast is one of the highest-margin, most profitable segments in quick service. It’s also one of the most competitive.

The unlock has always been, however, encouraging habitual and daily habits from consumers. Chaudhary says the test proved Panera’s coffee subscription accomplishes just that.

“We still have a lot of head room to grow and we think that this is going to be a more disruptive program to drive relevance with our customers with this daypart, with coffee being the leader,” he says. “And that will then become a catalyst to bring customers in in much larger volumes, like we described in the tests, more than 200 percent increase in frequency.”

“Those customers, a lot of them coming in for the breakfast daypart, will then see the variety and quality of food that we have and that will then grow that daypart even more,” Chaudhary adds.

How big is that 200 percent jump really? During the pilot, it meant subscribers showed up nearly half the month, or nearly every other day. That’s triple the usual figure for Panera.

In many cases, customers visited multiple times a day. Coffee in the morning. Iced coffee in the afternoon.

“We will bring better credibility to coffee,” he says. “We will drive more food attachment, particularly around the breakfast daypart. We will have this recurring revenue with our customers.”

Panera will also grow its loyalty base, which will then position it to offer more customized, personalized experiences in the future.

“We’re doing something that has never been done before in food retail,” Chaudhary says.