In the first quarter of 2018, Pei Wei conducted what it labels a “360-degree brand review.” The fast casual has been under a self-imposed microscope for months now, ever since it split from P.F. Chang’s China Bistro and installed a fresh identity (both are still owned by Centerbridge Partners, the private equity firm that bought the brands in 2012 for $1.1 billion). Perhaps the biggest psychological change came last August when the 200-unit chain moved its headquarters from Scottsdale, Arizona, to Irving, Texas. In late January, Pei Wei named John “J.” Hedrick, formerly the COO of NCP International—an operator with 1,300 Pizza Hut and Wendy’s locations—its new chief executive officer. Next came CFO and CMO changes, as well as IT and HR executive moves.

For Pei Wei, though, June 14 marked the most notable physical manifestation of its solo act to date. That’s when the brand morphed its Restaurant Support Center flagship location, in Las Colinas, Texas, into the first installment of a prototype Pei Wei believes will anchor future growth, expected to ignite again in the next couple of years. After testing, it could also influence retrofits based on which features return the best results.

Like many refreshes, Pei Wei wanted to contemporize its concept with brighter, lighter colors, modern lighting, and improved seating. But there was a larger purpose at hand.

“From scratch, it’s a very overused term,” Hedrick says. “But just how from-scratch we really are, I don’t think we’ve done a great job telling that story.”

The most expensive change in the new prototype involved building an ordering line that queues around the kitchen. In the past, despite the open-kitchen nature of Pei Wei’s standard model, guests just walked past the wok cooking. “They were walking right past all the work that was being done back there that is so different from other concepts,” Hedrick says. “On their way to get a drink or sit down, they probably didn’t notice it.”

The new design puts guests right where Pei Wei wants them. “By taking the time they were already standing, or might be standing in line, and now have them actually walk by and experience the breath of the work—that amazing show and amazing craft that goes into the way we prepare our food—to me it’s a big differentiator,” Hedrick says. 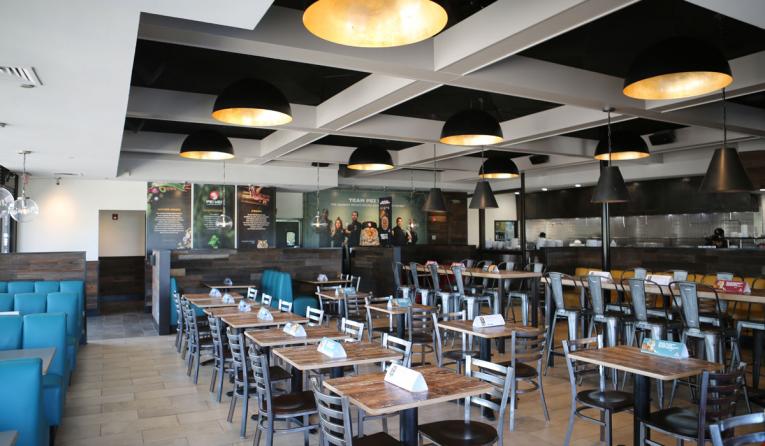 Pei Wei wanted to give guests a look into its culinary history. 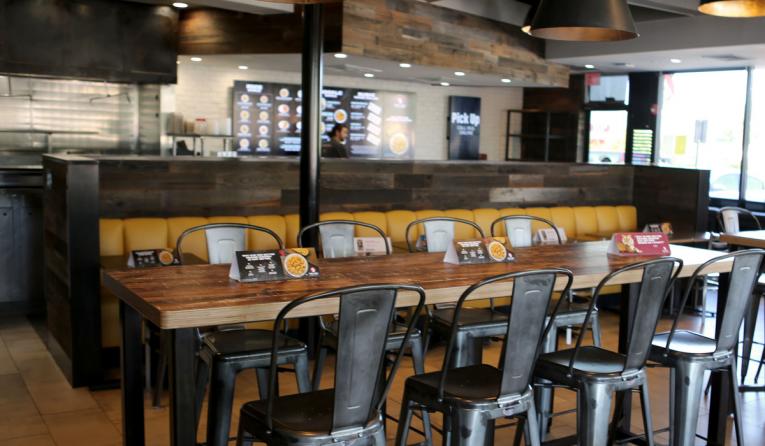 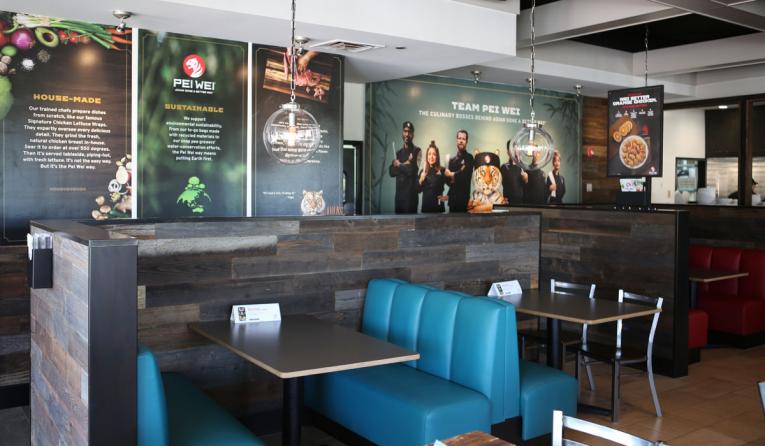 Everything, from floor to lights, was looked at in the redesign. 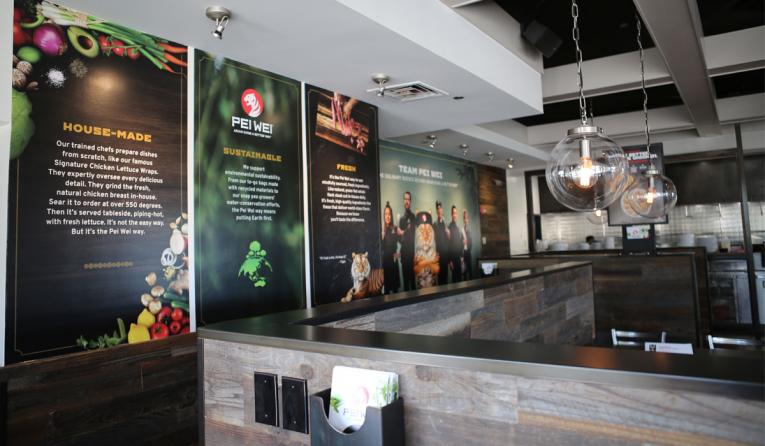 There are other, more nuanced changes that continue Pei Wei’s from-scratch conversation. There’s a mural representing Wok Chefs as the featured focal point of the restaurant. The new design graphics also gave Pei Wei a chance to promote its new tiger logo, which was introduced about four months ago.

Pei Wei featured the tiger mascot March in a fresh ad campaign targeted at competitor Panda Express and one of its signature dishes. It promoted Pei Wei’s new Wei Better Orange Chicken, introducing the Tiger and his “hapless friend, the Panda.”

The new restaurant is the first to fully integrate the tiger mascot and branding throughout. New uniforms reflect this branding change. There’s also a redesigned music playlist to set the vibe. Pei Wei added new digital menu boards as well.

Back in October, Hedrick told QSR the concept was working on reducing friction in the take-out experience and speeding up the dine-in process overall. The brand was averaging about 7-minute ticket times, which could swing to 12 minutes during busy periods.

Pei Wei significantly addressed some of those concerns with the new prototype. There’s a dedicated take-out station for guests who order online or through Pei Wei’s improved mobile app (the brand introduced its reengineered online and loyalty platforms in March). Pei Wei installed cubbies for to-go customers who paid online to just walk in, grab their order, and leave. There’s no more waiting in line.

Hedrick says Pei Wei didn’t want to stop there, however. The onrush of off-premises business presented additional opportunities. Pei Wei moved its core beverage set closer to the to-go station. Before, it was across the restaurant. To-go customers would have to walk through the restaurant to get a beverage if they wanted a fountain drink or iced tea. Now, it’s adjacent to the to-go area. This could help with upselling, as well as just enhancing the customer experience.

Additionally, Pei Wei added dedicated to-go parking. “Consumers are busy. We’re all busy, right? The one thing everybody can use is more time, and we would like to make sure we do everything we can to make our guests’ lives easier by making their experience with Pei Wei as frictionless as possible so they can eat something they feel great about eating in a very easy format,” Hedrick says.

Pei Wei switched up its beverage presentation and offerings in the design. When guests arrive at the point of order they’ll see a 3-foot cooler on the to-go side that has beverages, as well as 4-foot in-counter cooler on the dine-in side. Gone is the ice bath of past units. The beverages are showcased in a refrigerated unit that displays the product in a grab-and-go format. No more ice dripping. No more water getting on other devices.

It was a change, Hedrick says, worthy of the beverage improvements Pei Wei invested in. The brand flipped from a Coca-Cola Freestyle setup to a traditional set, while adding Blue Sky offerings—crafted options sweetened with pure cane sugar. Pei Wei added 20-ounce beverages for to-go customers.

On top of those switches, Pei Wei debuted kombucha, sparkling water, and revamped its beer and wine lineup at the store. There are two additional beer options, sake, and elevated wine offerings to improve pairings. 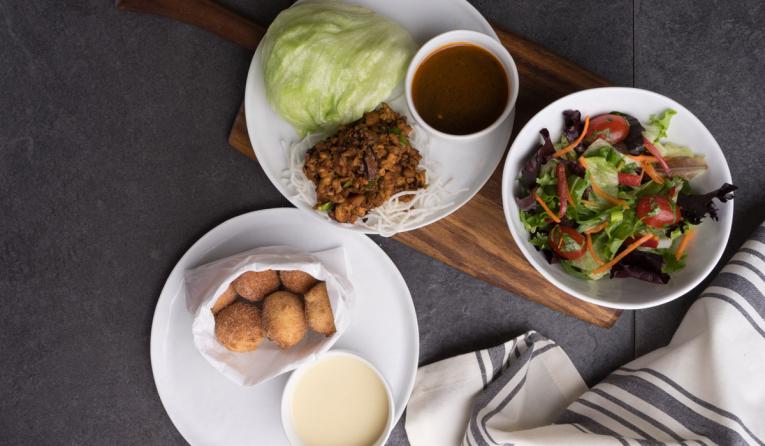 Pei Wei's small plates allow guests to round out their meal at an affordable price.

The location also introduced mochi ice cream specific to this unit. Yet those too are an example of broader changes for Pei Wei. On June 15, Pei Wei debuted small plates at restaurants nationwide, each under $2. These included:

The items were in pilot for a month, Hedrick says. These have tremendous upsell nature as well. Guests can, for example, order $5 Wei Better Orange Chicken, add a salad, and dessert, and still get out for less than $10.

Hedrick says the expansive review of Pei Wei in recent months has reinforced what surprised him on day one. The brand brings in whole chicken breasts. Flank steak arrives as a whole cut. The scallions arrive as whole scallions.

“I was amazed when I joined the brand to realize how much work and how much handcrafted care goes into every dish,” he says. “I think our average guest would also be surprised. So we really want to tell that story. That’s been one of the big lessons and learnings that I’ve had in my last 15 months with the brand.”