Piada's Tech-Centric Innovation Ushers in a New Era of Growth

At 41 locations, Piada Italian Street Food isn’t a fast-casual behemoth or household name. At least not yet. But that doesn’t mean customers don’t expect it to act like one. With technology in particular, COVID erased whatever lines separated weight classes in quick service. Ten or 1,000 units, guests now demand digital experience at parity (or even better) than the restaurant down the road. Whoever that might be.

And thankfully for Piada, it’s a journey that began well before the pandemic. In 2017, Matt Harding, SVP of culinary and menu innovation, says the company started to push outside the four walls. It built an online ordering ecosystem and was “chugging along.”

“We had modest goals and we knew that online was a place that we were going to be in the future,” Harding says. “But we had no idea exactly how big of a pivot it was going to be.”

The company bought a generic app and skinned it. Yet as trends continued, Piada pulled those efforts in-house. Director of Technology Jason Profitt, who joined in February 2017, led the project as Piada made a business case for app investment.

Recent conditions have answered any lingering ROI debates. Nearly half (48 percent) of respondents in the last three PYMNTS and Paytronix surveys said they used loyalty programs in at least one type of restaurant. For quick-service chains, 60 percent of patrons who interacted with a loyalty program did so via a mobile app.

By late 2019, Piada felt the shift coming. The goal was to get its ground-up native app live by the end of 2020. Amid COVID, it hired Joshua Nagy, a software engineer, and debuted the apps last November. Growth, per week, has tracked 10–15 percent since, Harding says.

“We made a big push. We did a lot of ads. And we let guests know that that’s where they could meet us,” he says.

Piada today is on the doorstep of broader expansion, something fueled, in part, by infrastructure worthy of a much larger brand. It plans to scale roughly 40 percent this year (to about 54 locations) and projects 20-plus more restaurants in 2023. New locations are headed for Austin, San Antonio, Houston, and Dallas, Texas, as well as Kentucky stores in Lexington and Louisville, and a Nashville, Tennessee, restaurant. Three North Carolina markets are on deck, too (Charlotte, Raleigh, and Winston-Salem). As is a Med Center venue on Texas Tech’s campus.

Again, to the digital gains, Piada’s expansion kicks up as app users account for 20 percent of customers. Rewards enchantments are expected by Q2, including incentives with tiers, virtual fundraising, and gamification.

Piada’s sales climbed as much as 20 percent at times during COVID, a credit to higher digital mix and in-store traffic that upped about 15 percent over the summer. “I think we’ve seen incredible sales growth over the past [22 months],” Harding says. “We’re very fortunate. We don’t look a gift horse in the mouth at all. But I think it had a lot to do with our early digital pivot.”

Or as Harding puts it, Piada “met the guests at the screen.”

That’s really where the brand separated from a crowded digital field, he says. Piada stayed open, rolled curbside, and strengthened third-party delivery. But so did most of its quick-serve peers.

Harding says pandemic-influenced guests, of all generations, started picking up apps as they looked to connect with trusted restaurant brands.

Beyond tracking down specific brands they missed when access was restricted, diner support has begun to shift from donations to direct ordering, evident by the 45 percent of consumers who order directly from restaurants to support their businesses, BentoBox found.

However, there’s a trend line emerging worth running a highlighter through: In Q4 2021, diners were significantly less motivated to order from restaurants based on promotions. Just 34 percent marked promotions and discounts as their leading culprit for orders, compared with 44 percent in Q3. 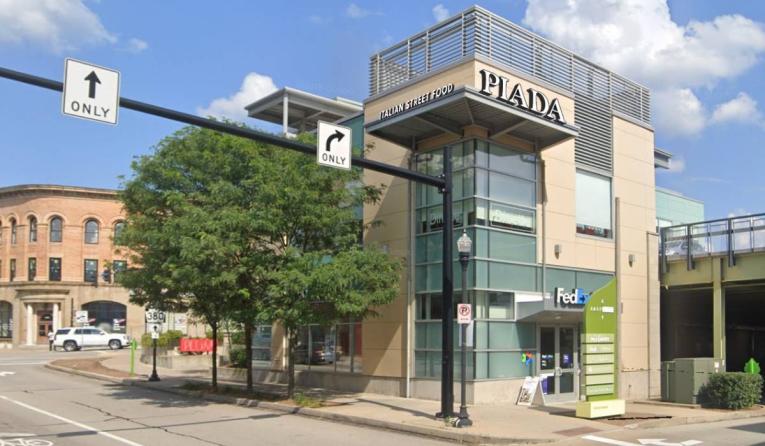 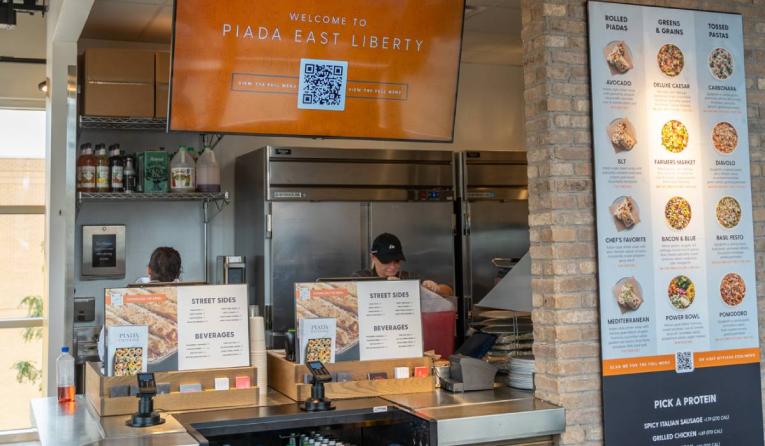 Back in October, roughly 50 percent of Piada’s workforce got on the frontlines to help.

Harding says Piada will always offer an in-store experience guests gravitate toward. Thanks to the brand’s timeless designs, from wrought iron to white-oak fused beams, it hasn’t needed a major renovation in 11 years. Digital, though, and convenience in general, offered the most runway.

Customers who walk in for takeout see the open kitchen just as dine-in guests do. Of the 41 locations, about 25 percent have pickup windows. Those units do “far better in business,” Harding notes.

“You’ve made all of our decision previous, you just wait until the allotted time, you drive up, you pick up your food, it’s already pre-paid. You’re eliminating a lot of the pain points,” he says. “… Whenever a guest can minimize the stress that they’re going through in a day, they’re probably going to naturally gravitate toward that considering if they’re listening to the news, watching the news, watching what’s happening out there, they’re going to have some angst and anxiety. And anytime you can relieve that for the guest, you’re going to be in a good spot.”

The ability to win across both sides of the business—digital and in-store—is where fast casuals, and Piada, see potential at this pandemic turn, Harding says. Not just flexibility, but elevated offerings and experience whether its convenience-related or social-driven. Both of those customers exist today.

Also per BentoBox, in Q4 2021, 79 percent of diners ordered at least once per week. This figure was up from Q3 (76 percent), but down from the first half of 2021 (85 percent) as more customers returned to dining in-person at restaurants in the summer months. Still, one in four (26 percent) said they planned to order more delivery and takeout in 2022. Despite more restaurants and local governments requiring vaccinations to eat in, 54 percent of people said they plan to maintain their current dining habits.

All in all, it’s a mixed bag, and one where customers aren’t entirely sure what they expect to do, or when they’ll change course. And restaurants have to prepare for every angle.

Regardless, though, making sure employees and guests are happy are the two things “that should be tattooed on the inside of your eyelids,” Harding says

A few months ago, he cut out an article from industry thought-leader Jim Sullivan. It laid out the current labor crisis not so much as a hiring challenge, but rather a turnover one. Harding agrees.

By the end of December, Piada doled out bonuses to all hourly or part-time employees with a $200 cash gift card. “It’s our way of saying, not only will you make a great hourly wage—you will have an opportunity to grow your career with a growing company, but we’ll also give you a little something extra for your commitment to our guests,” COO Lance Juhas said at the time.

Back in October, roughly 50 percent of Piada’s workforce got on the frontlines to help. The company’s entire marketing team was clocking 10 shifts per week, while others devoted their time to two days per week. Piada also increased its hourly wage by $1.50 an hour.

Piada offers insurance, app scheduling, and rolled daily pay during the pandemic as well. Ahead of 2022, wages hiked more than 12 percent systemwide. “And that’s something that we would rather incur the extra cost of that than not being able to service the guest,” Harding says.

Piada worked to get more efficient elsewhere. “You go from a to-bag SKU to a one-bag SKU,” he adds. “Can you look at your napkins? We’re looking at all of those things.”

Piada is getting creative with benefits when it can, everything from bus transit passes to pet insurance. Anything to foster a career ladder that will last well beyond the virus. “You gain a stronger culture when you promote from the culture,” Harding says.

Going forward, there’s no crystal ball. Shipping and commodity costs. How to take care of employees. None of it is getting simpler, Harding says.

“And so, I think as much as that puts extra pressure on the restaurant business,” he says. “I think the true restaurateurs are drawn into that fire to figure out how it’s going to work. And that’s what we’re going to do.”

Panera and Danny Meyer SPAC End Plans to Go Public
Is a Recession Coming for Restaurants?
How Restaurants are Dealing with Continued Inflation

Fast-Food Brands Brave the NFT World
How to Properly Insure Your Quick-Service Restaurant
The Next Generation of Restaurant Leaders: 2022 Edition