"We had lines around the block at all of our D.C. shops,” Andy Hooper, &pizza chief people officer, says.

On the same day that the federal government partially shut down, &pizza began serving free pizzas to affected workers across its chain of stores in Washington, D.C

“We felt like we had a responsibility to stand up, so we stood up,” says Andy Hooper, chief people officer.

The ampersand in &pizza, a fast-casual pizza chain based out of D.C., prompts questions about the symbol’s meaning. What does & stand for? Pizza & what? For Hooper, the ampersand is a symbol for purpose.

“We are first and foremost a purpose-driven and values-driven business,” Hooper says.“The ampersand is the purpose and the pizza is the platform.”

&pizza began as a pizza shop on H Street in the city’s NE quadrant in 2012. Diners walk the production line—similar to Chipotle—and design their oblong-shaped pizza a la carte. The use of stackable conveyer-belt ovens allows shops to produce a high volume of pizzas during busy hours, which has helped the business excel and expand in D.C. and other East Coast cities like New York and Boston. The company has taken up many issues in the past, advocating for local government to pass a $15 minimum wage and giving workers paid time off to march for LGBT rights at Pride, Hooper says.

When the federal government partially shutdown on December 22, the company’s purpose felt clear to leadership. They would help feed furloughed workers and federal contractors until they got paid again. The political source of the shutdown—a wall—seemed antithetical to the company’s values of unity and connectivity. &pizza doesn’t take a policy position on the wall, but it also doesn’t support the symbolism of exclusivity. “We stand for the opposite,” Hooper says. “We, as a D.C.-based company, as a purpose-driven company, as a social justice driven company, we’re following the story closely. The tool that we had that we could wield with more control and precision than anything was food.”

During the partial shutdown, &pizza gave away almost 30,000 free pizzas, Hooper says. But it wasn’t always easy. It experimented with different strategies during the record-long 35-day shutdown.

When the partial shutdown began on December 22, World Central Kitchen and its chairman, Chef Jose Andrés, began #chefsforfeds to mobilize chefs and restaurants in D.C. to feed some of the 800,000 federal workers being furloughed or working without pay as well as federal contractors out of work. Federal workers were able to pick up free sandwiches from any of chef Andrés’s restaurants from 2 to 5 p.m. daily. &pizza joined the effort and offered free pizzas during lunch hour from 11 a.m. to 2 p.m.

“We had lines around the block at all of our D.C. shops,” Hooper says. This disrupted lunch business downtown because paying customers weren’t able to get in the building. &pizza changed the schedule and moved free pizza hours to dinner time and then to late afternoon hours to ease traffic.

More than three weeks into the shutdown, Hooper says, the company’s CEO, Michael Lastoria, had a conversation with Andrés and learned that World Central Kitchen would be centralizing its #chefsforfeds initiative at an emergency kitchen and resource center at 701 Pennsylvania Avenue NW, which is equidistant from the White House and U.S. Capitol building. 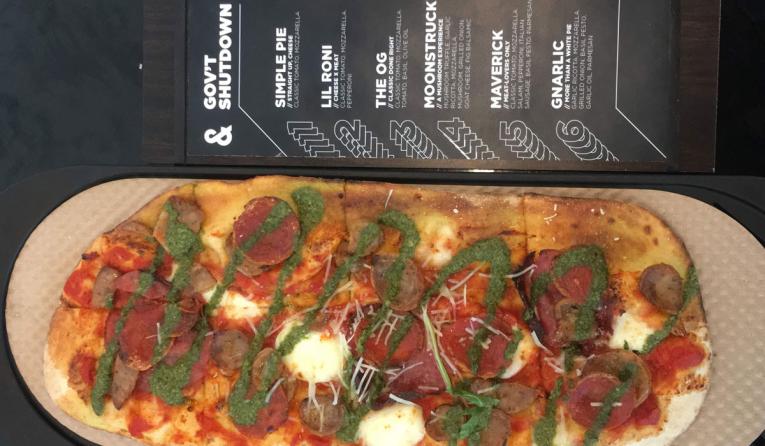 &pizza is ready to hand out more free pizza, if need calls for it.

“We didn’t expect the shutdown to go on this long,” Hooper says. “We discussed is there a sustainable way do this?” &pizza decided to centralize, too, and moved its free-pizza operation to the Broccoli Bar, a collaborative space with the non-profit Broccoli City, on 7th Street NW in Washington’s Shaw neighborhood. They also donated pizzas daily to World Central Kitchen’s emergency kitchen.

Mitchell McCraw is the shop leader for the Broccoli Bar. He says they streamlined operations at the shop to ensure effective service for all customers. They created a set menu of what Hooper and McCraw call the “hits list,” which included favorites like the meat-lovers Maverick. This helped hasten service and manage food inventory. “We had to restructure it completely,” McCraw says. He says they started on Martin Luther King Day and served about $1,500 a day in free pizza for the rest of the week until the shutdown ended. The deal would remain in place until federal workers received their first paycheck.

At $10.75 a pizza, 30,000 free pizzas represent a considerable cost, but Hooper doesn’t think about it that way. “We don’t really view it as a cost. We view it as an investment back into the community that made us,” Hooper says. “We feel as a purpose-driven brand it’s our responsibility to take care of the people here that made us … We wouldn’t be here without the paid support of federal workers and federal contractors.”

This highlights the complexity of Washingtonians’ relationship to the government. Residents often resent the way their city is portrayed in media and TV. People forget that folks live here like any other American city. But disruptions to the federal government expose the city’s dependence on its governmental center. It can convert a national, political issue into a local one that disrupts daily living.

“D.C. has been defined [by others] for its divisiveness, for politics and left versus right and now the shutdown,” Hooper says. “Even the wall is a symbol for it. We stand for the opposite. No walls. No partisanship. No left or right. We’re in this together.”

President Donald Trump announced January 25 that a deal had been made to reopen the federal government. It was a cold, sunny afternoon in Washington. Inside the Broccoli Bar, a handful of customers were relaxing in the warmth of the shop. Two diners played Connect Four while others were finishing their pizzas. It was hard to tell who was getting free pizza and who was paying for it. Everyone shared the space equally and together. The president was making his announcement in the White House Rose Garden that moment, but nobody in the shop noticed because there were no TVs or radios. The Broccoli Bar wasn’t just a place for free pizza, it was a refuge from the stress of the shutdown.

One federal worker from the EPA, who wished to remain anonymous, was finishing her second free pizza of the shutdown. She would return to work next week, but she said she wouldn’t forget what &pizza stood for during the shutdown.

"As a concept, we started with the &, which to us stands for unity and connectivity,” Lastoria says. “From there the pizza part was quick to follow, after all, what brings people together more than food and pizza? In an increasingly divided world, we love that pizza can be a platform to connect us all."

And if the government shuts down again?

“I hope that’s not the case,” Hooper says. “But we’re prepared now.”