Partners Les Tomlin and Will Moyer are betting big on the future of robotics.

The duo plans to fill North America with 20,000 fully automated PizzaForno kiosks by 2026, including 1,000 in the U.S. by the end of 2022. Despite the lofty goal, there was a time when Tomlin was more on the side of skepticism.

Three and a half years ago, he and Moyer engaged with French businessman Vincent Le Gouic, who wanted to export his automated pizza-making technology to the U.S. Over the course of roughly six or seven years, he sold about 700 kiosks as a white-label solution for mom-and-pop stores needing an additional revenue source.

Tomlin and Moyer flew to France and drove about an hour north of Paris and found themselves in a town of roughly 1,500 people. Around 11 a.m. they walked up to an automated pizza machine and saw an 85-year-old woman buying two pizzas.

“At that exact moment, we had this sort of ‘aha’ entrepreneurial moment where it's like, wow,” Tomlin says. “If we were to take this technology and build a brand around it, we could totally disrupt the pizza business globally.”

The two obtained North American rights and returned to Canada with some of Le Gouic’s culinary team to formulate recipes and push through eight months of research and development, including creation of the PizzaForno branding. Tomlin is president of the company while Moyer is CEO.

After successfully launching in test markets around Toronto, Tomlin and Moyer began expanding throughout Canada via licensing deals with independent operators. There are now roughly 40 kiosks in North America, including five units in Michigan. In the past six months, the industry veterans finalized their go-to-market strategy in the U.S., and have eyes on major national licensee deals across the southern part of the country. There’s already commitments for 200 locations between Southern California, Louisiana, and Florida.

“I think North America has been very late to the game on robotic food,” Tomlin says. “I mean look at PizzaForno— the technology has been around France for the better part of 10 years. COVID, the labor shortage, people don't want to spend 10 minutes waiting for anything.  All those things add up to super fast, super convenient, super quick serve. That's where I think everybody's got to go.”

The process starts in a commissary—or what Moyer and Tomlin call a “pizza topping operation”—with ingredients, boxes, and pizza-cutting knives delivered to each location via Sysco. From there, 12-inch pizzas are assembled, placed in boxes, and transported in refrigerated vans to kiosks, which can hold 70 pizzas.

When customers arrive to the PizzaForno kiosk, they are greeted with a 32-inch touchscreen where they can choose their pizza and payment option. Once the order is received, a robotic arm removes a pizza from the cold section, pops open the lid and lifts it into a proprietary convection oven where it bakes between 90 to 120 seconds. The pizza then drops into a slot accessible by customers, finishing a process that takes roughly three minutes. Additionally, customers have the option of choosing a cold pizza and baking it at home.

“We knew we would have to sort of blow consumers’ minds because the consumer sentiment around vending machines back then three years ago—and still somewhat today's in my opinion—is that everything that comes out of a vending machine is just like a stale sandwich,” Tomlin says. “So we knew that the pizza had to be exceptional.”

“Our goal is to set the bar higher than the national chains, like Domino's and Little Caesars, and be able to compete closely with the local artisanal pizzeria every city in America,” he adds. 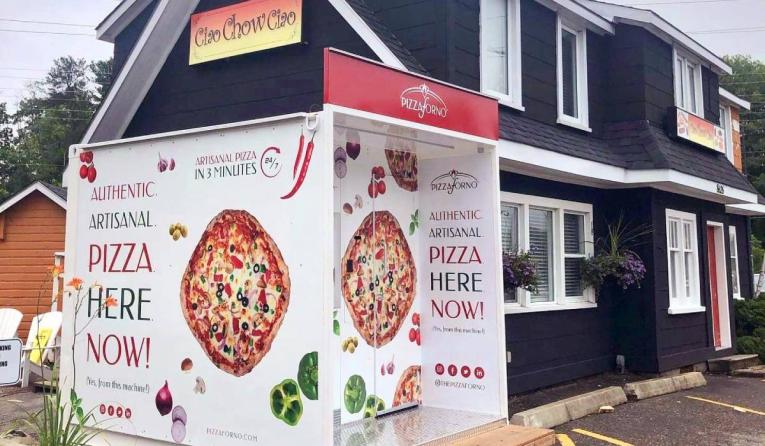 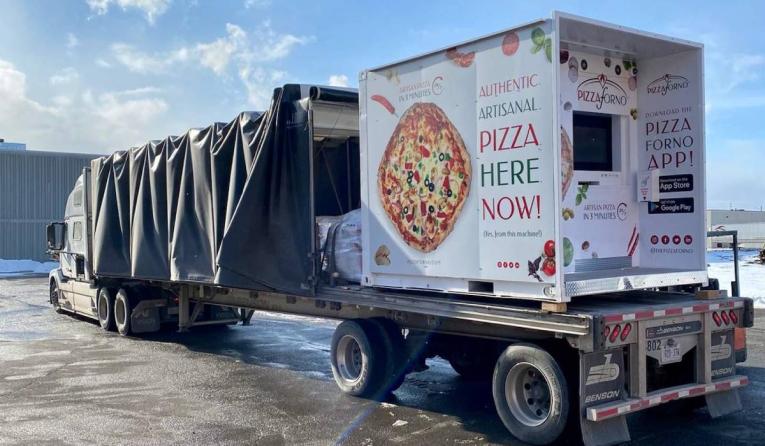 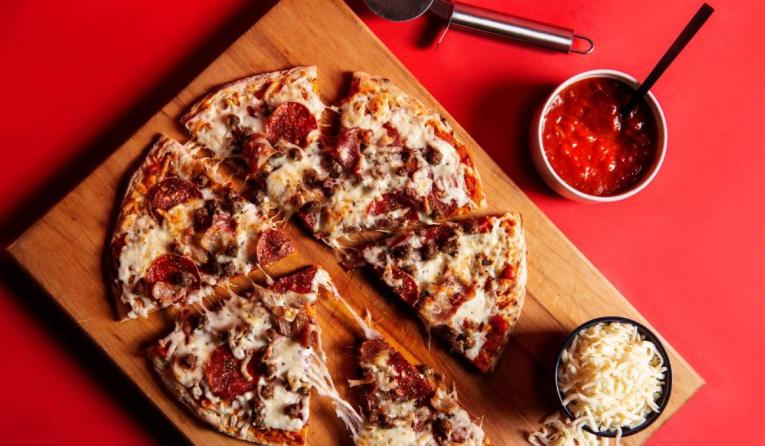 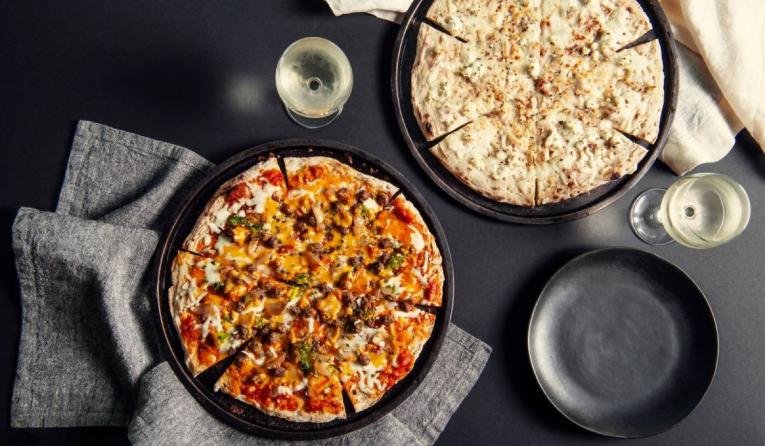 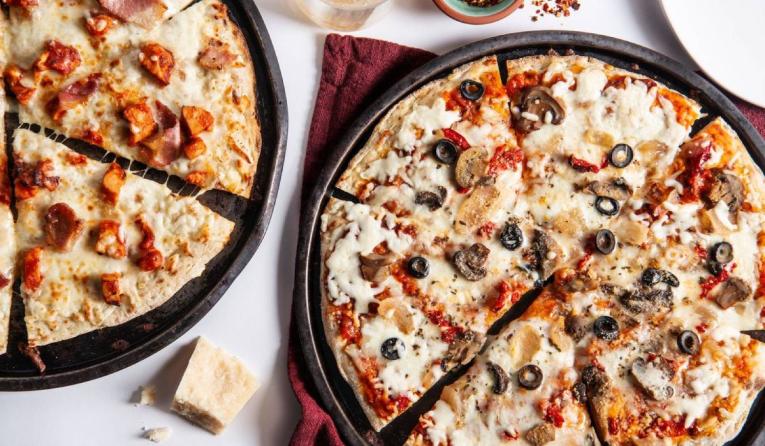 "That is where I think the future of food is—robotics," says Les Tomlin, president of PizzaForno. "Whether it's pizza or coffee or burgers.”

Tomlin says the technology has undergone several iterations and modifications over nearly 10 years of existence, to the point that it’s now become the "Mercedes Benz built by the French.” The kiosk boasts a 99 percent uptime; for frame of reference, Tomlin says McDonald’s frozen drink machine has an 85 percent uptime.

The automated pizza oven only requires 65 to 80 square feet of space and can start operating within four to six hours. Also, kiosks come with web-enabled technology that allows licensees to track real-time sales data, inventory, and mechanical troubleshooting. Online ordering will soon be available through the PizzaForno app, and food delivery is being tested in Toronto through Uber Eats.

The company leverages a hub-and-spoke model, in which commissaries serve as a hub and are surrounded by a handful of kiosks, or spokes. In most cases, a minimum of five pizza ovens are necessary per commissary to see real success. In Toronto, one hub services 15 machines, but Tomlin says it is possible for one commissary to handle 20 to 25 units.

The layout of each commissary varies. For instance, one operator in Canada services one machine and uses a 400-square-foot space, while another licensee uses an existing restaurant after hours. PizzaForno’s Michigan partner bought a building that previously housed an independent burger restaurant and converted it to a commissary.

Kiosks are typically in high-traffic areas, such as hospitals and college campuses. On average, about 35 pizzas are ordered per day, meaning ovens must be refilled about every other day.

The machines, which take about 20 hours to build, are assembled in two places—the original location in France and another just outside of Toronto. Each facility has the capacity to build 5,000 units per year.

“It's really an assembly of components job more than a hard manufacturing job, which makes it highly scalable,” Tomlin says. “And if we have to put together an assembly factory in the U.S. to meet our demand, Vincent would certainly find the party to do that.”

One of PizzaForno’s first clients was Aramark, which signed an exclusive multi-year deal in Canada. The company also placed a kiosk inside Ripley’s Aquarium, which eliminated its cafeteria in favor of the automated pizza oven.

Although the company hasn’t done much marketing to secure licensees, it receives about 200 inquiries per week through social media and press releases.

“We look for a combination of entrepreneurial spirit and obviously the right amount of capital to successfully launch a market," Tomlin says. "The first four master licensees for the U.S. are a varied group of venture-capital-backed people with some restaurant experience. A lot of them have some foodservice experience in the past, but not necessarily a requirement.”

Expansion plans for fully automated kiosks have accelerated as of late. Earlier this year, fast casual 800 Degrees Pizza announced a partnership with Piestro to produce 3,600 kiosks in the next five years. Brick-and-mortar restaurants and ghost kitchens will double as commissaries for the kiosks, otherwise known as 800 Degrees Go kitchens. Piestro’s pizza ovens also cook items in three minutes, but the toppings are placed on the pizza inside the machine as opposed to being pre-made.

Outside of pizza, Creating Culinary Communities (C3), a food-tech platform that leverages retail, hotel, and kitchen spaces with a host of digital brands, is fueling the growth of Nommi, a robotic kiosk that produced grain, noodle, and lettuce bowls. The partnership calls for 1,000 kiosks.

Tomlin says it’s a sign that robotics is not just a passing trend of the pandemic.

“Our business was accelerated by COVID because we need these low-touch, no-touch food solutions,” he says. “The idea of a low-touch, no-touch food solution didn’t even exist prior to COVID. And then suddenly the labor shortage is now further accelerating our business plan. That is where I think the future of food is—robotics. Whether it's pizza or coffee or burgers."