The chain is driving innovation with better leadership, more off-premises options, and a modernized marketing approach.

Cicis recently passed the sixth-month anniversary of declaring bankruptcy. And July was the best sales month since the pandemic began, pushing the 302-unit chain to flat results against 2019. August has been positive as well, although numbers softened slightly in recent weeks with kids returning to school and the continued spread of the Delta variant. But nights and weekends are still meeting expectations.

In jurisdictions where it’s allowed, some stores are allowing guests to serve themselves, with sneeze guards covering the food. At corporate locations, Cicis requires masks and provides single-use gloves for guests. Brand president Jeff Hetsel says it’s a matter of working closely with every health department to ensure each store is up to standard.

“We believe we're getting more inspections than we've ever gotten. We're starting to see health inspectors coming in more often, and we get a lot of praise for having hand sanitizer available everywhere and the gloves,” Hetsel says. “Right now, it's going very, very well, but again, we're cautiously optimistic that the Delta variant is not going to take us back to where we were before as a brand.”

Hetsel hasn’t seen much of a difference in performance between units that provide buffet versus those that don’t. He adds that since Cicis was founded 36 years ago, the brand has always offered special requests, meaning waitstaff will bring a pizza to the table if it’s not part of the buffet.

“Making a special request is the key to being a successful Cicis,” the executive notes. “The most expensive pizza is the one that nobody eats. And so if you make somebody exactly what they want, it comes out in five minutes hot and fresh. You take it to their table. I think the guest feels good about that. So for the folks that are still a little, ‘Hey, I'm not 100 percent sure I want to go up and get my own stuff,’ for 36 years we've been making them whatever they want to bring it to their table.”

Before COVID, Cicis attempted to improve efficiency and flexibility by closing and refranchising stores and shutting down one of its three distribution centers to consolidate operations. The buffet model was also facing increased competition from fast casuals and third-party delivery. Then the pandemic hit, and the pressure-packed environment forced Cicis to default under its credit agreement.

After lenders decided not to move forward, the group elected to sell $81.6 million worth of debt to D&G Investors, jointly owned by SSCP Management and Gala Capital Partners. Cicis and D&G eventually agreed to a prepackaged bankruptcy deal in January, and emerged from court in March. D&G converted all of its secured debt into equity and provided $9 million in debtor-in-possession financing to Cicis.

Even before Cicis went forward with bankruptcy, improving off-premises was one of the key goals. Pre-COVID, sales outside the four walls accounted for 10–12 percent of sales, but that has leaped to 30–40 percent. The chain invested in an improved pizza box with an insert and started layering products with more sauce and cheese so it travels better. Cicis also brought back its giant 16-inch pizza offering, including a new pepperoni pizza with 80 pepperonis for $13.99. 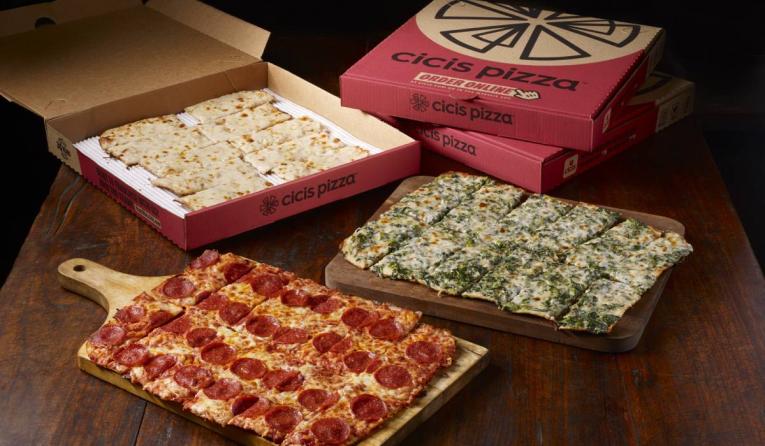 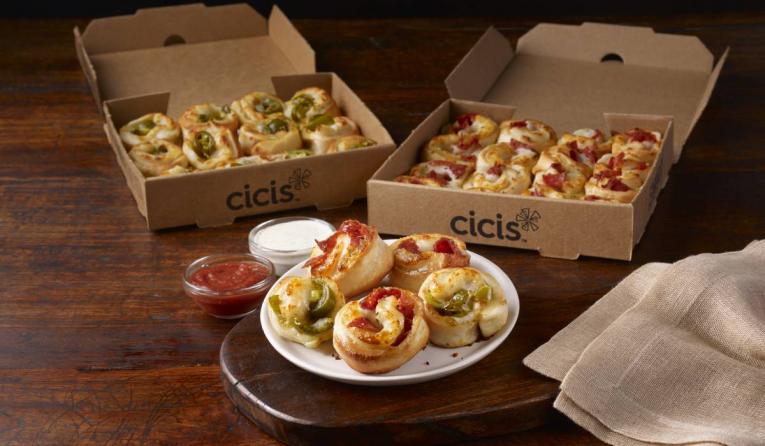 In conjunction with marketing and IT, Cicis is converting to Olo Rails, which funnels third-party orders into one system as opposed to controlling different tablets. Hetsel, who also runs stores as a franchisee, saw a 6–7 percent uptick in online ordering when he implemented the change.

“When people got busy, all the orders didn't get answered,” Hetsel says. “So this is helping you more with your customer success. It's also speed. The stores that have it, love it. It's been a big difference.”

Cicis has also worked with Dallas-based marketing agency Loomis to reposition its brand image, such as capturing new food photography and venturing into more social media platforms, like TikTok. Hetsel explains that Cicis is targeting consumers who visited the restaurant as a child and reconnecting with those that have been ordering at home.

“I have 25 and 26-year-old kids and they're the ones that really pounded me about, ‘Dad, you've got to be on TikTok,’” Hetsel says. “You got to get out there, more social media. You're really just trying to reignite a bunch of people that knew about Cicis, but just hadn't been in a while. It’s an accelerant to get those people back into the stores.”

“It's amazing. I’ve been with Cicis for 30 years and I wonder why we never pushed harder on this before,” he continues. “It’s really gone well. We're built for delivery and for carryout. It's been fun fixing it.”

With several improvements underway, Hetsel expects Cicis to return to unit growth sometime in the future, because “if you’re not growing, you’re dying.” The pizza chain expanded to about 650 stores in 33 states in 2009, but the footprint declined to 430 in 2016. At the start of 2020, the chain was down to 395 units. Now, Cicis has just over 300 outlets in the U.S.

The brand is designing stores that require $600,000 instead of $1 million and doubling down on its highly profitable gaming business. Franchisees are able to decide how large they want their game room to be; One store in Mesquite, Texas, opened a 2,500 square-foot game room, and another in Lake Charles, Louisiana, recently debuted with a 2,000-square-foot gaming space.

“Without being corny, it's a game-changer for us,” Hetsel says. “People are really getting excited about pizza and games. An example in Alabama, we have franchisee Scott and Cassie Mills, they had one store, and they didn't own their games. Now they have four stores, own their games, and couldn't be happier. All that's changed during COVID. They bought the stores during COVID. Just the owning of the games is what's really made the difference for a lot of our franchisees.” 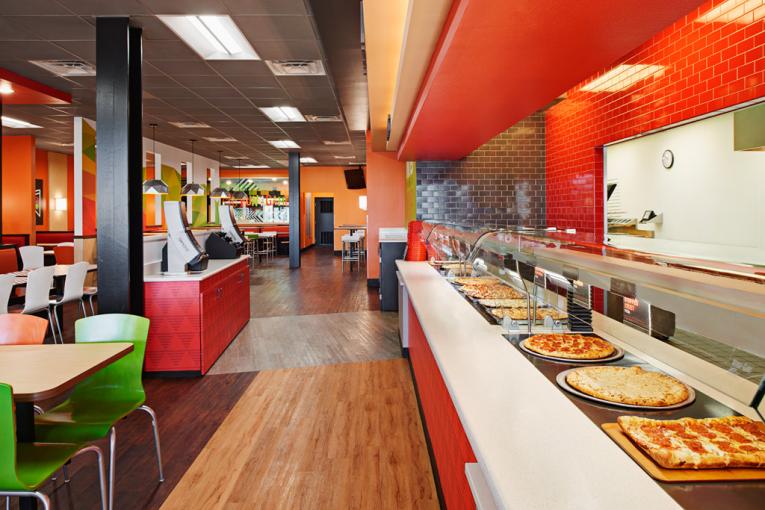 “Our clear expectation is get everything in place that we need to start growing the brand again,” says Cicis President Jeff Hetsel.

Cicis also understands the importance of opening stores with dedicate resources to off-premises. More operators are calling about opening Cici’s to-go model than the full-size dining prototype, which is why the chain is seeking more sites with drive-thru window capabilities. Hetsel notes future stores must have long rows of heated shelving as opposed to proof boxes and should be arranged in a way that doesn't mix off-premises and dine-in consumers.

Hetsel thinks if it takes more than two minutes for a takeout customer or delivery driver to get their food inside the restaurant, you’re losing the game.

“You got to attack that like a fumble on the football field. You've got to get to them first, get them that product, and get them out the door because they also can impact your business,” Hetsel says. “You know they work for Uber, but fortunately if they're carrying my pizza they represent me.”

Currently, Cicis has eight to-go stores, but Hetsel anticipates that model becoming a much bigger part of future openings. He views the growth strategy as a two-pronged effort: focusing on takeout locations as satellite business for franchisees and also remaining dedicated to the legacy buffet offering.

Overall, Hetsel believes restaurants will become smaller. One of his restaurants is 5,000 square feet and one of the busiest stores in the system, but he would never build a unit that large again. His next location will be 4,000 square feet or less, with 700 square feet for the game room. The kitchen will be more efficient, and food will be pushed through the drive-thru window.

In the face of rising commodity costs, one of Cicis biggest advantages has been owning its own distribution company, JMC. The change in leadership has been effective, as well, Hetsel says. While Cicis did not have access to adequate capital before bankruptcy, Anand Gala and Sunil Dharod of D&G have injected life into the brand and paid vendors in a timely fashion.

Hetsel knows that if he needs funds to buy $1 million worth of cheese to avoid a spike in costs or declining availability, the duo will have his back and respond swiftly.

“Partners like Coca-Cola will short you 200 cases of Powerade and won't call you about it,” Hetsel says. “When you're a distribution chain, that's tough. Our new partners have been a part of why we've emerged so fast and why I think the people in the office and the franchisees and the people in the stores, I mean the attitude and culture is coming back fast and it's really been because of our new partners’ availability and access at any time 24/7 to help us.”

Leadership's effectiveness may be an early signal of consistency and longevity, which Cicis has lacked in the past two decades. The chain was purchased in a management buyout by Levine Leichtman Capital Partners in 2003, which then sold the pizza chain to ONCAP Management Partners in 2007. Seven years later, Cicis was purchased by Arlon Food and Agriculture Partners.

Hetsel says Dharod and Gala remind him of Cicis Founder Joe Croche, who saw operations as the No. 1 concern. Every decision moving forward will be made with that North Star.

“Our clear expectation is get everything in place that we need to start growing the brand again,” Hetsel says.

The 2021 QSR® magazine Drive-Thru Study
Opinion: With Chick-fil-A and the Drive-Thru, Don’t Race to Conclusions
The Future of Fast-Food Drive-Thru Arrives Early

How the Asian Food Space Has Evolved in Quick Service
Will the Holiday Season Ease Restaurants’ Hiring Woes?
Virtual Brand Best Practices for Restaurants to Live By

Double Down on Digital: How Restaurant Brands are Planning for the Future
Payment Innovation Takes Center Stage for Restaurants
Restaurants Face Two Choices in New Era: Innovate or Fall Behind