Recharged Honeygrow Coming Off Most Successful Year Yet

The fast casual is ready to reignite major growth.

Honeygrow had no shortage of success in its infancy. From 2012–2018, the brand scaled to 33 locations and raised roughly $70 million through multiple rounds of funding. The growth could have been intoxicating, CEO and founder Justin Rosenberg says, as is often the case for entrepreneurial-minded fast casuals. Yet the former financial analyst recognized missteps before they became sinkholes.

Honeygrow’s early, rampant performance wasn’t cloning itself. “Instead of doubling down on growth, which we certainly could have done,” he says, “I decided to push pause.”

By November 16, 2018, the brand closed three Chicago stores, one in Washington D.C., and a New York outpost of Honegrow’s smaller concept, Minigrow. That brought the Philadelphia-based chain’s fleet to 28 locations. There are now 25 in seven states.

In 2018, this was an increasingly common tale in fast casual. The category burst out of the Great Recession’s lowered barriers for entry and real estate agility, with a younger generation seeking variety, localized options, and convenience that didn’t break the bank or lunch hour. For five straight years, fast casual expanded 10–11 percent, according to Pentallect Inc. But by 2017, it slowed to 6–7 percent.

Simply, the field got crowded.

Per consultancy Green Circle, fast casual climbed only 2 percent in spring 2019, a significant pullback from growth that stretched in the high single-digits, year-over-year, from 2010–2017.

However, Rosenberg didn’t want to approach fast casual’s new reality as some peers did. “For me, this is the long game,” he says. “I want to create one of the best fast casuals in the country/world, and we have a lot of work to do. But to grow for growth’s sake, I feel a lot of concepts do that, and good for them. But that’s not what this is about for me.”

Honeygrow wasn’t going to put blinders on and try to make it to the other side. The brand spent half of 2018 and all of 2019 shoring up operations. It got leaner and worked to “find change under the cushion without sacrificing quality,” Rosenberg says. Things like grilling their own chicken instead of getting it sous vide.

“Let’s just take what we have, which is working, make it better, and then replicate this,” he says. “And then really get after it.”

"... Having those couple of years of let’s make this great, were honestly the best thing we could have ever done," Rosenberg adds.

Come early 2020, Honeygrow was back on course, Rosenberg says. COVID’s arrival, naturally, threw a joker into the best-drawn hands of companies across America, but it wasn’t something that crippled Honeygrow’s trajectory. In fact, it forced the chain to tighten further and, with summer in full swing, sales approached pre-virus levels, yet the P&L was even stronger, both at the store level and corporate side.

Honeygrow opened a unit in 2020 and one last year. It could expand by 25–30 percent in 2022 in new and existing markets (concentric growth outward from the Mid-Atlantic). These openings will include Honeygrow’s new prototype, which is slightly smaller with added shelving space to handle elevated app/curbside/pickup/delivery business. Thirty-five to 40 percent of sales moved digital versus about 8 percent before COVID.

And beyond the back-end efficiency, Honeygrow boasts a 100 percent digital model that’s given it a head start in current conditions. Customers order via kiosk in-store (if they don’t choose to order ahead). The brand also recently triggered rewards through the kiosks, a big unlock, Rosenberg says, given 60–65 percent of customers are on the platform. “We’ll be able to essentially reward folks for coming to the restaurants,” he says.

Rosenberg calls 2021 Honeygrow’s “most successful year yet” in terms of of sales and profitability. Despite supply issues, staffing shortages, and myriad COVID setbacks, the brand is humming along. 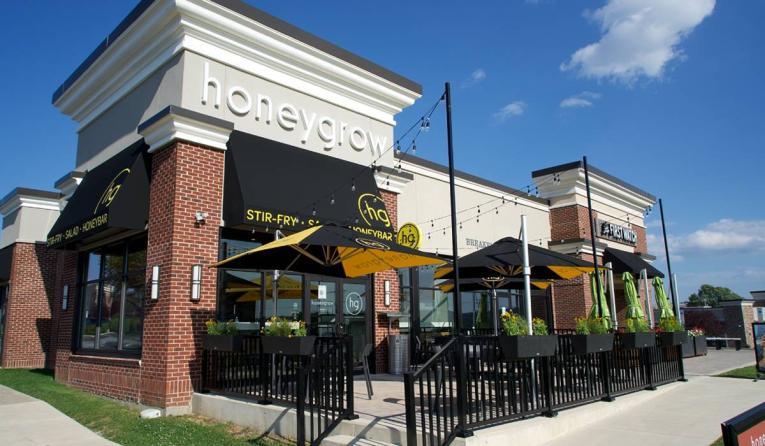 Honeygrow is ready to grow in the suburbs as well as city centers.

While the latter slid back as dine-in returned, the trend of Honeygrow welcoming a high percentage of transactions via third party has continued.

In spring of 2021, however, is when sales really “popped,” Rosenberg says. It wasn’t just higher check and larger orders, either, as was the norm industry-wide; it was transactions, too. “We started seeing a lot of repeat visits. The challenge then became, in the middle to end of the year, meeting demand while having the challenge of finding folks to continue to work for us.”

Honeygrow employees, on average, make about $13–$15, depending on position. Managers north of that. But importantly, the kiosk and digital-only system lends itself to guests tipping more often than not. It measures in the ballpark of $1.50 an hour, meaning those same front-line workers can actually gather $16.50, or more.

“There’s a lot of places where you can go to a coffee shop and oftentimes I’ve noticed folks, they order, they use their card, and then the cashier will spin the iPad around and then there’s the tipping option,” Rosenberg says. “And I think a lot of times people feel uncomfortable with that. Whereas with the kiosks the way we have it, there’s no pressure.”

It’s become a training point, too. How can Honeygrow make the experience better for the guest isn’t just a whiteboard tactic that flows from the top down. Exceeding customer expectations, he says, is something hourly employees see right there on their paychecks.

When Rosenberg started designing Honeygrow, the kiosk came about more from a business problem than trying to ride a tech trend.

He originally pictured an assembly line fast casual, akin to Chipotle. “You’ve got to order from somebody, and that’s challenging,” says Rosenberg, whose business plan for Honeygrow was rejected 93 times before he found an investor. “So I thought, how could I maximize throughput during lunch hours without having to have the challenge of a bunch of people who are just going to be cashiers, and then you’ve got to cut them.”

Given the iPad was unveiled in early 2010 by Steve Jobs at an Apple press event, the technology was still a little flimsy in terms of business transactions. There were no apps that did what Rosenberg wanted.

Honeygrow worked with Control Group (which would later be purchased by Alphabet) in 2014–2015 to design the user experience. It then found a point-of-sale company to integrate and created what’s live today as Honeygrow’s modern kiosk.

The goal always being, how can the brand create throughput without crushing its P&L? “Versus, oh, I want to be a tech company. We’re not,” Rosenberg says. “It's more fortuitous that today it really helps us from the digital. Obviously, we can market to folks better. It drives frequency. That was honestly more of an additional bonus that came with designing a concept like this.”

As delivery rose outside the four walls, Honeygrow navigated the channel “carefully” to protect margins. In 2019, the company realized the expense at hand was unmatchable, Rosenberg says. So it implemented a delivery premium and “nobody really pushed back.” But there is a line to consider, especially given wider inflationary trends.

“You have to be careful,” he adds. “I’ve seen some concepts similar to ours where the price for, say, a salad, is reaching close to $20. And at that point, it’s simply a no-brainer of let’s just eat at home. We're constantly looking at pricing over our competitors. How do we fare with that?”

The nature of COVID broadened the conversation in other ways. Fast casuals and other restaurants, Rosenberg says, aren’t just asking themselves if customers would rather eat at home to save money—they might decide to do so to avoid other people. And, for some time in 2020, consumers often picked that route because they had no other outlet. So their vision of the at-home occasion has changed.

It makes menu innovation, and differentiation, more critical than ever, Rosenberg says. You have to give them a reason to leave the house.

Even 10 years ago, the concern was on his mind. “It seems like there’s a new bowl concept that opened here and there’s a bowl concept over here. But I don’t know, it’s boring. It’s been done 1,000 times,” he says.

Honeygrow has worked with Sun Noodle since 2012. Rosenberg had to dine around New York City’s top ramen spots and grill employees until somebody hooked him up with a standout supplier. One sent him on a goose chase to the Bronx. Most promised an answer and never returned.

“My thinking was always, I don’t want to be another grain bowl concept,” he says. “It’s been done.”

The whole wheat noodle was an important turn, Rosenberg adds, because noodles are generally seen as less healthy than grains. So it completes the halo.

Moving forward, Honeygrow will grow where the deals are, he says. If it’s urban or suburban, the concept has a profitable, working model for both. “We’re just looking to continue doing our thing, and doing it bigger, better, and faster going forward,” Rosenberg says.