The fast casual has a goal of signing 85 new franchises in the next 18 months.

It became immediately clear the path forward wouldn’t be easy. A few months after opening, a one-star Yelp review labeled the restaurant as the “Taco Bell of Nashville hot chicken.”

Initially, Lalehzarian was unhappy with the comment because of the apparent negative connotation. But the words eventually greased the wheels in his brain. He took that review, transformed it into a positive, and thought to himself, what if The Red Chickz becomes “the Taco Bell of Nashville hot chicken?”

“In order to get to that giant model, we've got to be able to multiply and multiply fast, and the only way to do it is by franchising,” says Lalehzarian, who’s previously worked for Starbucks, Wolfgang Puck, Pinkberry, and California Pizza Kitchen.

JOIN US! RSVP today for QSR's Orange County Fast Casual Meetup Event. From 6–9 p.m. on July 19, we'll be hosting restaurant operators for an evening of food, drinks, and networking, and we'd love to have you attend.

The idea for the restaurant began when he flew to Nashville and spent two weeks asking everyone—from the hotel bellman to Uber drivers—if anyone in their family knew how to make homemade Nashville hot chicken. A couple of listeners even invited Lalehzarian into their home and put the recipe on full display.

He and his partners brought the information back to Los Angeles where the seasoning wasn’t touched, but the crispiness and lightness of the fried chicken was tweaked by eight different chefs.

Customers are able to choose among six heat levels, including cool, glow, spark, bonfire, blaze, and inferno. The Red Chickz sells about 20–30 plates per day of inferno, which is made with Carolina Reaper, the hottest pepper on Earth.

“What it comes down to is the challenge, and a group of young people come in and they challenge each other to see who can go hotter than what they had last time and this time they want to try the next one up,” Lalehzarian says. “That's usually how people get to inferno. But we also have our loyal customers that every single time they purchase inferno because they just love the flavor and heat.”

Although Lalehzarian reached his epiphany a few years ago, the fast casual’s franchising program wasn’t officially announced until August 2021—and there’s good reason for it. Pulling from his days overseeing multi-unit food and beverage operations, he knew successful scale requires a solid foundation.

A big step was simplifying processes to reduce mistakes, improve consistency, and give future franchisees more time to focus on customer service. For example, sauces and seasonings are pre-manufactured, minimizing prep time and reducing labor costs. The menu is quite simple, too, with just 10 main items, one dessert, and a handful of add-ons.

“A lot of that happened, and once we felt like the foundation is solid now and we can build on it, then that was the time we start going to the franchise and basically putting everything together and launch it,” Lalehzarian says. 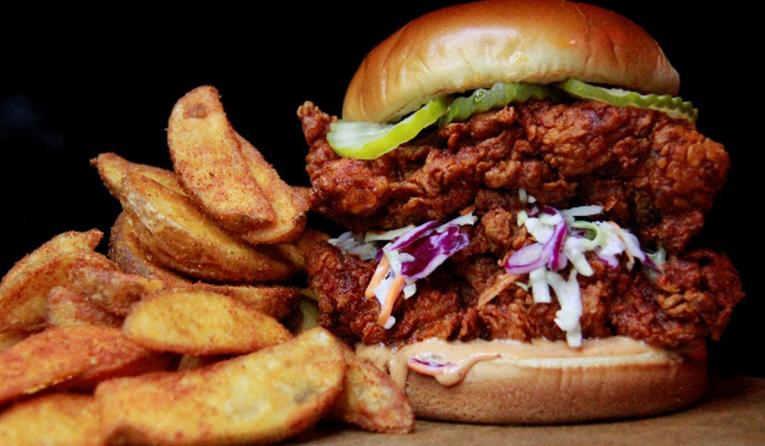 Expansion will start in California, Arizona, Nevada, and Texas, and the first deals are already in the process of being signed. Buildout takes about six to nine months, so the inaugural set of franchise stores—multiple locations in Northern and Southern California—could be in operation by Q4 of this year. The Red Chickz has a goal of signing 85 new franchises in the next 18 months.

The brand plans to open a second unit in Culver City, California, in February. It will essentially be the model for franchisees to follow, like the use of self-order kiosks. But the operative word is “essentially.” There will be a core design, but each store will showcase local elements of its community.

The Culver City location is on the smaller side at 750 square feet, which isn’t a size Lalehzarian will encourage to operators. It just happened to be a great spot that the restaurant couldn’t pass on. The Red Chickz will actually average about 1,300 square feet in standalone and endcap outlets.

“Each market is different and with Nashville hot chicken, we're getting into a pretty open market,” Lalehzarian says. “So it really depends on the market and what we're trying to capture in the market.”

Some areas may even call for drive-thru, a channel that’s proven quite profitable for quick-service concepts during the pandemic. In the year ending October 2021, drive-thru represented 52 percent of off-premises traffic and increased visits by 9 percent year-over-year and by 23 percent compared to two years ago. Off-premises already mixes 60 percent at The Red Chickz, and customers can use its app to order ahead.

All items are made-to-order, so Lalehzarian and his team are exploring ways to include a drive-thru and add convenience, but not sacrifice on quality.

“We are definitely not fast food and we're not trying to be a fast-food concept,” he says. “Our food is not going be ready within 45 seconds, that's for sure.”

When The Red Chickz expands to these new locations, it will do so with strong marketing support that starts with social media. The brand has more than 1 million followers on TikTok, and its videos have received more than 93.5 million views. For perspective, Burger King has just short of 635,000 followers and Wendy’s has 1.2 million.

When The Red Chickz opened, Lalehzarian says there couldn’t have been more than five Nashville hot chicken restaurants in L.A. In the following years, the number has ballooned to more than 50.

In other words, the U.S. appears ripe for a brand to rise as the “Taco Bell of Nashville hot chicken.”

“I think this is all the sign of, this is not one of those concepts that is just going to have a really fast spike and then it's going to go away,” he says. “I feel like this concept is here to stay for a while and it's definitely going to touch a lot of, not just giants, but a lot of different menus and concepts just with the flavor and what it's doing to the fried chicken concept itself.”

6 Questions with Wing It On! CEO Matt Ensero
8 Trends in Social Impact for Quick-Service Restaurants
The Next Generation of Restaurant Leaders: 2022 Edition

Is a Recession Coming for Restaurants?
Restaurant Industry's Sales Recovery Slows in May
How Restaurants are Dealing with Continued Inflation