Robert Thompson Has an Answer to America’s Pickleball Fever

The founder of Punch Bowl Social calls Camp Pickle’s whitespace “bigger than anything I’ve ever worked on before.”

Robert Thompson believes he’s sitting on the highest-growth concept of his 25-plus year career in eatertainment. And it’s an opportunity his subconscious recognized first.

There’s no shortage of buzz surrounding pickleball, labeled by some as America’s fastest-growing sport. The New Yorker went as far as asking if the game, played with paddles and a Wiffle-like ball, could save the country. More than a million people stateside joined in during COVID-19. At a total of 5 million Americans, there’s roughly 130 players for every court, Thompson says. He projects 40 million pickleball-ers by 2030. For perspective, there’s about 20 million tennis players nationwide. Golf, roughly the same.

Officially, pickleball welcomed 4.8 million converts in 2021, or a two-year growth rate of 39.3 percent, according to the Sports & Fitness Industry Association’s 2022 Topline Participation Report.

Yet this expansion isn’t where the epiphany clicked. “The first reality for me was when I realized that a sport that a 70-year-old does for fitness, a 22-year-old can do with a drink in their hand,” Thompson says. “And I was like, wait a minute, that’s an eatertainment dream come true.”

So Thompson, the founder and former CEO of Punch Bowl Social, got to work. Camp Pickle, which he describes as “nostalgic Americana” set in a 1940s rustic summer camp, is headed for Huntsville, Alabama, in 2024 followed by Denver.

Unlike Thompson’s “Jaguar Bolera” brand, slated for Raleigh, North Carolina, early next year, Camp Pickle doesn’t have a methodical path laid out in front of it. Rather, he foresees an “extremely assertive growth schedule” as the concept looks at 10 openings between now and Q1 of 2026. While that rate might not impress a small-box, replicable fast casual, these are 55,000–75,000 square-foot Mass Timber-built venues that, thus far at least, are coming out of 5-acre plots complete with parking facilities and indoor-outdoor activations. Everything from scratch-driven, wood-fired kitchens to horseshoes, darts, duckpin bowling, and deck shuffle. With the Denver store in particular, Thompson’s Angevin & Co., which previously acquired New Orleans boutique hotel The Frenchmen and opened beverage-focused Three Saints Revival in Denver, as well adding the site where Paul Prudhomme’s K-Paul (closed in 2020) once stood, is buying the site and taking “this thing from civil engineering all the way through development,” he says. It will take two years to get open.

Overall, he says, Camp Pickle’s whitespace “is bigger than anything I’ve ever worked on before.”

This isn’t a meager statement coming from Thompson. Punch Bowl Social had climbed to 18 units when Cracker Barrel acquired about 60 percent of the company’s economic interest and 49.7 percent of its voting interests in July 2019. The deal, ultimately crippled by COVID-19, cost Cracker Barrel $89 million for an initial non-controlling stake, with the company agreeing to provide upward of $140 million.

But the important note is the casual-dining leader felt Punch Bowl Social could chase triple-digital growth. 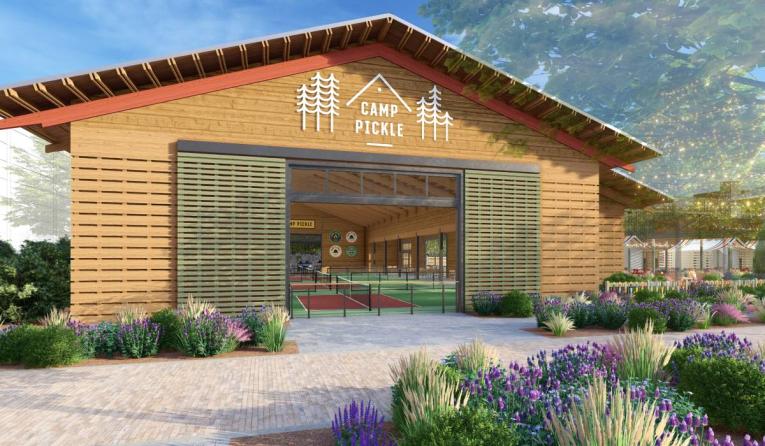 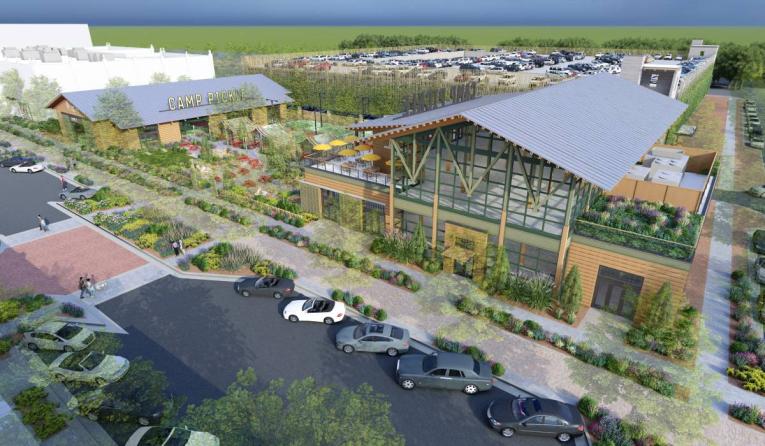 Camp Pickle will look to areas with more than 500,000 people.

Why pickleball? Beyond the participation boom, Thompson says there’s demographic synergy. And it’s why he went with the camp vibe to capture two sides of what he sees as a lucrative token. “The belief is that the 22-year-old will find this design kitschy and the 65-year-old will find it nostalgic and warm,” he says “And so, I needed to create a comfort zone that registered authentically with such a wide-ranging demographic set that are all enjoying the same kind of activities.”

Simply, pickleball is a sport that’s not cornered into any box. It’s being played by celebrities (Michael Phelps and Leonardo DiCaprio are avid proponents), children, seniors, families, Gen Z, millennials, families, couples, and divorcees, Thompson says with a laugh. “I’ve never seen anything that crosses demographic cohorts like pickleball does. To create an eatertainment concept where we’ll do 80 percent F&B over the eatertainment, we needed to create a brand experience, not just a rec center or racquet club experience,” he says.

F&B accounted for 89 percent of revenue at Punch Bowl Social during Thompson’s run. That was always a defining trait that separated it from a flooding pack. The same differentiator will be true here, he says. Picture old Coleman coolers stocked with a cocktail that serves 10 people. Camp Pickle will place the cooler next to a court and bring out glasses.

The food will lean Mexican but with, naturally, classic camp food, only elevated. It’s a work in progress, Thompson says. “There are so many cocktail opportunities,” he notes.

Camp Pickle won’t be the lone pickleball-themed big-box brand on the market. Chicken N Pickle and Smash Park are two growing examples. The former plans to reach more than 20 locations in the next two years, it says, with Populous, a global design firm that played a part in some of the most iconic venues in the U.S., including Yankee Stadium, developing the prototype. Smash Park has its sights set on a fourth location, in Omaha, Nebraska, in late 2023 or early the following year.

Yet they’re all hoping to ride the same tide Thompson is—this notion that pickleball is a lifestyle as much as a game. “People that play like to be around other people who are playing,” Thompson says of why it’s a snug fit for eatertainment. “And that’s whether they’re playing or not. So this indoor-outdoor experience [that we’re building]—the camp fires, the tent cabanas you see out there—that all adds to the socialization of the concept. That’s the only way I know how to create a model.”

Thompson, who began his eatertainment career 25 years ago when he introduced Buffalo Billiards & Havana Diner Lounge, says he figured early on how to use activations in the category as a way to increase F&B sales. “That’s all this is about. It’s fairly simple,” he says. “But I need these kinds of spaces for people to socialize to give them room to eat and drink, otherwise we’ll never get to an 80 percent F&B ratio over the gaming side without creating those kinds of spaces and immersive experiences.”

Huntsville as the debut location was a matter of synergy, too. The 2022–2023 U.S. News & World Report named it America’s best place to live. About half of the population are migrants to the state (NASA’s Marshall Space Flight Center has been there for more than six decades) and there’s a diverse slice of families and younger people flocking to the engineering- and tech-heavy job market.

Camp Pickle will look to areas with more than 500,000 people. Otherwise, it plays pretty much anywhere, Thompson says. “It works in the suburbs, people will travel for it, it’s not like my other, urban-intense concepts that would try to focus on going to trade areas or high density or multi-family or millennials and Gen Z,” he says. “This is something you can put on a piece of dirt and with some adjacency to the highway system and people will travel to it.”

There’s another lever on deck as well. Thompson sees runway to grow Camp Pickle through company owned and franchised deals. With the latter, he says there’s a bevy of high net worth individuals and real estate developers popping up pickleball concepts nationwide. Some skew rec center. But the ones that are trying to layer F&B in, “don’t have the expertise to do that and they don’t understand the dangers they’re walking into,” Thompson says.

“We’re trying to solve this for them by making Camp Pickle available,” he adds. “If you’re a real estate developer and you own 5 acres in a good part of town and you see something as successful as these pickleball concepts, you’re going to want to develop that land. And we can help them make a safer bet.”

Also, there’s a “big retail play,” Thompson adds with attire, paddles, and merchandise along those lines.

“When people start talking about pickleball you can’t stop them,” he says. “If they’re a player, they’ll talk about it more than their kids. And people that get nuts about it are playing like six days a week. … So we can say, Topgolf, watch out. We’re coming with pickleball.”