The company is eyeing at least three multi-unit deals this year.

Web Exclusives | June 25, 2021 | Ben Coley
Roy Rogers
The 53-year-old legacy chain once again finds itself in a prime position to go after franchises.

Roy Rogers entered 2020 with a major growth initiative in mind.

All the factors appeared to be in place. The nearly 50-unit chain brought in industry veterans, launched with DoorDash, rolled out a new store design, worked with SiteZeus to map territories, enhanced its signature menu items, and created an online store for its fan base. Negative transactions began to flatten and same-store sales climbed upward. The goal was to sign two to three multi-unit development agreements.

Then COVID hit, and changed the game completely. The chain’s largest franchisee, HMSHost, opened two locations in travel plazas in Pennsylvania, but a robust franchise sales initiative never got off the ground.

Yet Roy Rogers remained determined. The chain eventually adjusted to the pandemic, and recorded some of its strongest sales in several years. The implementation of Uber Eats, curbside pickup, and enhanced drive-thru and online ordering measures bolstered the brand’s accessibility and guest experience.

Franchise development is back on the table, and with the pandemic seemingly in the rearview, expansion is within reach, the company believes.

“The last three years, the initiative has been around growth and so what the ownership group committed to three years ago was to ensure that the brand was ready for that growth from a menu planning perspective, from a prototype perspective, from an operational perspective,” Koffler says. “And so the infrastructure has been put in place over the past three years, and once the ownership group was confident that everything was in place, then they brought me on board to begin the actual growth of the brand. So we spent the last three years really redefining the brand from an infrastructure standpoint to get us ready to be able to grow and not be overwhelmed by that growth.”

When Koffler arrived early in 2021, the first order of business was identifying the ideal franchisee. The company landed on a multi-unit operator who has existing infrastructure with other concepts and wants to add Roy Rogers to their portfolio. That means no single-unit deals or agreements with individuals who don’t have prior restaurant operating experience. 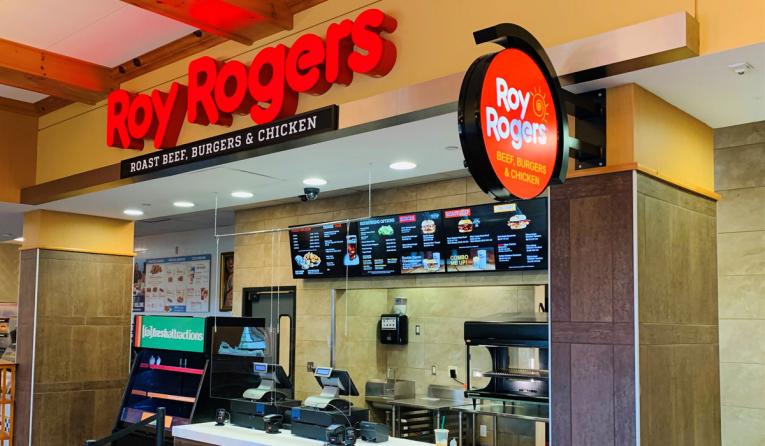 The next step was understanding how to properly tell the story of Roy Rogers and let the right stakeholders know it's franchising again. To help with that, the brand hired Trevelino/Keller, a public relations firm based in Atlanta. The company also onboarded a CRM solution, which wasn’t in place before Koffler’s arrival, and scheduled several trade shows.

“All in an effort to tell the story of the iconic Roy Rogers brand and why restaurateurs and developers should be taking a look at Roy Rogers at this time in terms of expanding their existing portfolios,” Koffler says.

Koffler explains 2021 is a foundational year, but he still has a goal to sign at least three multi-unit deals. In 2022, he hopes to bump it to 12 multi-unit agreements, and keep that cadence in the years to come. The strategy is to build concentrically out of core markets in the Mid-Atlantic, like Maryland, Virginia, West Virginia, and Pennsylvania. The growth circle would slowly get bigger and include New York, the Eastern Seaboard, and states like Ohio, Tennessee, Florida, Texas, Louisiana, Mississippi, Alabama, and Georgia.

The franchise executive expects most of the growth to come from new franchisees, with existing operators expanding slightly. As far as what Roy Rogers will offer to potential partners, Koffler says there will be some considerations around value engineering and shrinking the dining room, but no formal plans have been put in place.

“We are a [quick-service restaurant], so we had some dine-in and we have of course the drive-thru,” Koffler says. “So that's our prototype moving forward. Because as we saw through 2020, the advent of having a drive-thru was a great benefit for us. From strictly a sales perspective, we had a very, very good year in 2020. We had an amazing year, in a pandemic year, and that is wholly contributed to the fact that we have a drive-thru. And so we saw our drive-thru business increase exponentially throughout last year. So we are firmly committed to the drive-thru model, knowing that it helped us navigated last year. And if anything of this nature happens again in the future, we’ll be well-positioned.”

Although no major changes are planned for the prototype, Roy Rogers is in the midst of an ongoing remodeling initiative. The redesign is split into two components—improving operations and enhancing the customer experience. Some of the notable improvements include: optimizing the drive-thru and back-of-house layout to reduce steps and increase speed of service, adding stack-stoned towers to the main entrance and drive-thru, and including a description of its food as a sub logo to raise awareness among new customers. There’s also a new color scheme, lighting fixtures, digital menu boards, artwork, flooring, furniture, seating arrangements, and a panel describing the company’s history. 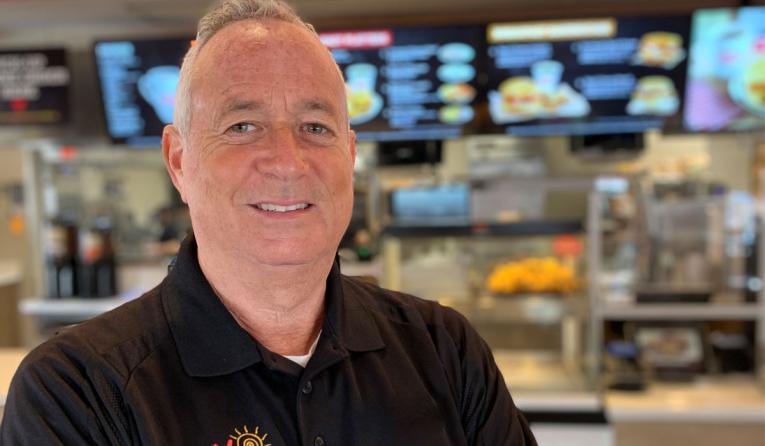 Five corporate and three franchised locations have been remodeled. The two new stores opened by HMSHost in 2020 feature the redesign, as well. In 2021, two company-run stores will undergo the remodel and two new locations will open with the updated design.

Executive Vice President Jeremy Biser says the goal with each remodel is to increase sales by 10 percent, but the pandemic has made it difficult to assess the progress of that objective.

“It’s been challenging to get an accurate assessment of the impact of the remodels because the majority of our stores have been outperforming due to a combination of external factors and our increased focus on drive-thru, delivery and digital initiatives, as well as the positive impact on efficiency associated with the remodels, new store design, and improved operational layouts,” Biser says.

Roy Rogers once numbered close to 650 restaurants in the late 1980s. By the next decade, Imasco, then the parent of Hardee’s, attempted to transform the chain into Hardee’s stores and penetrate the Northeast. The plan didn’t work, and the company sold about 110 units to Boston Chicken/Market in the Philadelphia area, 150 units in New York and New Jersey to Burger King and Wendy's, and 182 restaurants to McDonald's. In the early 2000s, the Roy Rogers brand landed in the hands of Jim and Pete Plamondon Jr., when the unit count dropped into the 40s.

Koffler certainly believes Roy Rogers can return to that glory, but it will depend on how the company tells the story, the way in which it chooses partners, and the manner in which it relates to those operators once they are on board.

He knows he has the tools to succeed. Food is a big point of differentiation, with the brand's roast beef burger and fried chicken platforms. The other major advantage is Roy Rogers’ legacy status—an aspect Koffler will lean into as he leads the growth strategy.

“We're talking about a brand that's been around for 50 years now, so people know and love Roy’s and have grown up with Roy’s as I did up in the Northeast, and that certainly gives us another point of differentiation instead of a new brand coming to market,” Koffler says. “We are iconic in nature and people have very, very fond memories of the brand and that's an important aspect of what we do.”