The salad chain is looking at nontraditional venues and new markets as it attempts to double in size.
Web Exclusives | January 23, 2020 | Ben Coley

Saladworks CEO Kelly Roddy and Chief Marketing Officer Mark Mears believe the brand is prepared to take itself to the next level.

With demographic shifts, lifestyle changes, and healthier eating habits working in the franchisor’s favor, the stage is set. As Mears says, “We’re at the confluence at the perfect time in history.”

The approach—doubling the number of units to 200 by year’s end—is as aggressive as the Conshohocken, Pennsylvania–based company has ever been since it was founded in 1986.

“There’s a large demand for the brand outside of the northeast,” Roddy says. “We think it’s possible. There’s a lot of things that need to happen, and we’re testing a whole lot of different ways to get the brand out there. Some of them will be successful; some of the tests won’t be successful. We’re going to look for every opportunity we can for growth because there’s a huge consumer demand for it, and we fit that need really well. We have a great story, a great soul. I think you will see this brand getting really close to doubling if not exceed doubling this year."

Saladworks began the year with the opening of its 100th store in Baltimore. The chain is expected to reach 105 by the end of January. Of the current amount, about 90 percent of the units are franchised. The company refers to itself as America’s original fast casual salad concept. Mears says, “We were plant–based before plant–based was cool.” It launched its first franchised location in 2001. The offerings include a create-your-own salad option, signature salads, wraps, and soups.

Most of the units are clustered in the Mid-Atlantic region, but Roddy expects to see units open in states such as California, the Carolinas, Virginia, Georgia, Florida, Ohio, Arkansas, Colorado, and Indiana. There will also be growth in existing markets like Maryland and Delaware.

Roddy says the only way Saladworks will reach its goal is by succeeding in nontraditional venues—universities, military bases, supermarkets, and airports. The plan is to test new growth opportunities as corporate stores and to franchise the models that work. 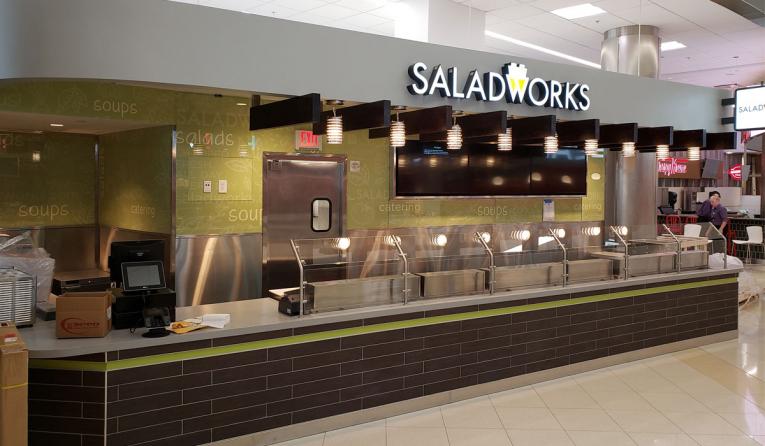 Airports and other nontraditional venues pave the way for Saladworks' franchise growth.

Before joining Saladworks in August, Roddy was CEO of Schlotzsky's, where he oversaw a major rebranding effort and a decade of growth. He attributes the success to putting franchisees in a position to achieve—a plan he will follow at Saladworks, as well.

“Our focus is unit-level economics and making franchisees successful,” Roddy says. “Our intent is to be a franchisor. But we have to create really profitable models.”

Under that umbrella of nontraditional units will be the exploration of ghost kitchens, where the location exists solely for preparation and delivery. Roddy says there’s an opportunity for this type of space, particularly with the growing consumer demand for off-premises services.

Mears adds the industry’s landscape has changed and lines have blurred. One example being grocery chains housing full-service restaurants. In a time where there’s saturation, he says, Saladworks wants to research each way a guest could experience the restaurant.

“Once we do, we’ll test which ones make the most sense,” Mears says. “Not all of them will … We’re really going to expand the definition of nontraditional in every possible way.”

The growth will be paired with a few initiatives. Saladworks has agreements with third-party delivery services DoorDash, Grub Hub, and Uber Eats. In addition, the company will increase its catering efforts and bolster its online ordering feature.

The chain is in the throes of relaunching its rewards program, where it will look to engage the consumer in a two-way interactive dialogue instead of being, as Mears puts it, a “digital coupon dispenser.”

Roddy credits the increase in same-store sales to off-premises and digital growth. He estimates that in 2020, 20 percent of sales will consistently come from digital channels. 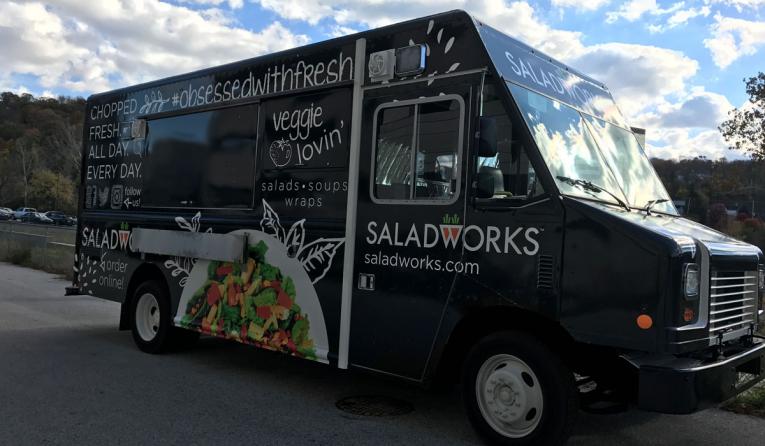 The overarching theme, however, is the “Year of Originality,” a marketing tool Saladworks will use to tell the story of its brand—franchisees dedicated and focused on taking care of customers.

Mears views Saladworks as a valuable gem that just needs to be polished.

For Saladworks to double in size, he says, the chain must grow on a solid foundation. That’s what he, Roddy, and others are trying to accomplish in the short term so the chain can grow faster down the road.

“We don’t need a lot with our menu. We don’t need to do a lot with any of the other dynamics,” Mears says. “We just need to continue to do it better every single day and take full advantage of the trends that I mentioned that make Saladworks perfectly poised for growth in the era. We’ll look at optimizing our menu always, we’ll look at new and exciting LTOs [limited-time offers] when we have them, but there is so much low-hanging fruit with just doing the basics better, more effectively, and more productively to help our franchisees make more money.”

Navigating Unprecedented Times: 5 Ways to Boost Your Restaurant’s Mobile App
What to Know About Supply Chain During Coronavirus
Can Kiosks Help Restaurants Stay Alive Through COVID-19?

The First 22 Days of March: Restaurants Have Lost $25 Billion
The Rush Away From Restaurants Continues
Nearly 30 Percent of People are Afraid to Eat Out, Study Says

Communicating About Coronavirus: 10 Ways Restaurants Should Engage
Tips for Keeping the Lights On with Fazoli's CEO
One Restaurant’s Survival Idea? Become a Grocer