Sbarro CEO David Karam said the brand’s intention has never been to exit malls, its primary domain for decades.

But when he stepped into his role seven and a half years ago, he knew the brand faced serious threats because of its nearly exclusive reliance on the trade area. Sbarro needed to become more than a food court operator, and that’s what Karam’s team strived for in 2014 as it led the restaurant through a second bankruptcy and the shedding of about 175 stores.

One attempt was the fast-casual concept Pizza Cucinova, but the company never generated enough returns on investment. So Sbarro sold the business a couple of years ago. The brand also tried competing on the street with standalone units—a first in the restaurant’s history. While a handful of those stores are still open, Karam said they haven’t appeared to gain traction either.

The struggles forced Sbarro to step back and rethink its brand position. Within that deep reflection, leadership acknowledged the guardrails of the company and zeroed in on its strengths. Sbarro doesn’t have to be a Papa John’s, Pizza Hut, or Domino’s, nor does it want to be.

Instead, the 600-unit brand identifies itself as the leading quick-service chain serving the impulse pizza occasion, specializing in New York-style pizza by the slice and stromboli. That niche accounts for about 3 percent of the pizza business globally, Karam says. While not a huge segment, the CEO notes Sbarro is by far the leading restaurant in that 3 percent.

“I mean, basically, we created that niche and so it's always good to be the dominant player in a sector,” Karam says. “ … So what that reflects is an acknowledgement that this brand is really built upon the slice offering. And that's the recognition that’s described in that impulse pizza occasion. That's really the essence of the Sbarro brand. It doesn't mean we don't sell whole pizzas. It doesn't mean that we don't participate in third-party delivery, etcetera. It's just that those are not the center of the plate idea with Sbarro.”

Sbarro creates customers’ cravings by embracing its retail dimension. Karam says there isn’t another concept in Sbarro’s space that does a better job of displaying products with elevation, abundance, and identification. The pizza chain executes this with an updated design that features a red wall with a white slice, wood tones and natural materials, new signage, and a tagline that boasts “The Original New York Pizza.”

The brand then fulfills the cravings by making dough fresh every day and using 100 percent whole milk mozzarella cheese.

“That's a critical component,” Karam says. “The metaphor I always give is, you don't go into a bakery and buy anything if the shelves are empty, right? You want to see a beautiful abundant display of baked goods, and that’s the way that Sbarro operates. So by displaying our wares that way, we recognize that's what stimulates the craving. And then, of course, we satiate it because we believe we have the best ingredients and the freshest preparation.” 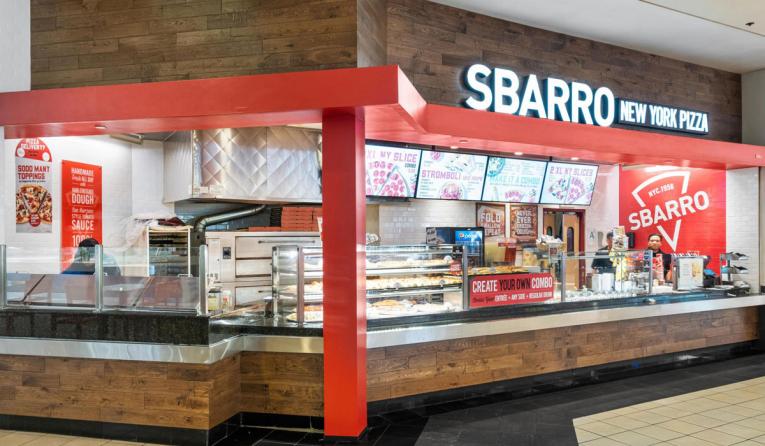 Can Sbarro spread beyond the food court?

EG Group, a U.K. retailer that operates fast-food outlets, has 25 stores under development domestically and internationally, and Karam says that number will grow. Sbarro is also working with a number of other convenience store companies as well as travel centers such as TravelCenters of America, which has a 25-year history with the restaurant.

“So now the brand has these four categories and you start to tally the development opportunities domestically as well as globally,” Karam says “ … And the most important thing is that with our 65-year history, we know how to optimize sales and profits in those spaces better than any brand in the industry. We've gone in behind and replaced Papa John's and Pizza Hut and other national brands. And the sales increases are meteoric—I mean 2x, 3x. So we know how to optimize sales in these impulse pizza category venues, and that's where the chain is today.”

However, uncertainty remains about malls, which have seen a consistent decline in foot traffic over the years. Coresight Research said in a report in August that a quarter of malls will close in the next three to five years.

Looking into Karam’s crystal ball, he believes that will shrink the U.S.’s mall population to roughly 700 stores. Currently, Sbarro has 230 mall-based units domestically, and the chain wants to grow into 500 to 600. So Karam says there’s still room to expand.

Of the 65 stores under development right now globally, 25 are in mall food courts. Karam lists multiple reasons for this. For one, mall conversions reduce franchisee investment from approximately $400,000 to fewer than $100,000. Additionally, because of the decline in mall traffic, rent is decreasing significantly. Sbarro recently opened a mall-based store in Orem, Utah—the brand’s 26th opening of 2020. Twelve more units are planned for the rest of the year.

The restaurant offers third-party delivery in almost all of its mall locations, a channel that’s risen to 6 to 10 percent of sales. In 2018 and 2019, same-store sales were positive in those units despite the downward trend of malls. 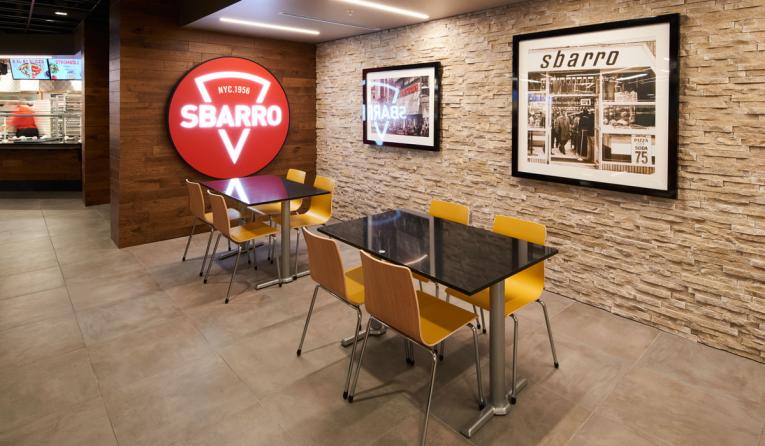 Karam believes Sbarro will bolster its pipeline enough to open 80 restaurants globally in 2021.

“Most malls have a food court, and almost all food courts have a pizza player. And there's a broad recognition that Sbarro is the strongest option there,” Karam says. “I mean, we do more sales per unit than any of our competitors. And most of these big mall developers recognize that … The fact that we were up in 18 and 19 in close to 200 restaurants is I think indicative of the successes that our tactics and strategies have had. So we've modernized the brand effectively.”

Essentially all of Sbarro’s targeted venues, which require high pedestrian traffic, were hit hard by COVID. But Karam explains that the company went into the pandemic with great momentum and some of the strongest earnings in nearly a decade. Sbarro has been hurt by the crisis, but Karam says it’s given the brand more opportunities as competitors fall by the wayside.

As the former president of Wendy’s International and the franchisee of close to 350 units, Karam knows first-hand what operators are going through with COVID. That’s why he thinks Sbarro has an advantage by being 30 percent company-owned. The CEO tells new franchisees all the time that they should feel comforted by the fact that Sbarro has skin in the game and an alignment of interest.

“So when you're coming in as a franchisee of a new brand, you want to make sure that that franchisor understands the operational and financial pressures that you're facing and knows how to grow sales and knows how to generate high returns on investment,” Karam says. “And with 170 company-owned restaurants, we know that and we lead. We don't just direct franchises, we lead the franchisees, and I think that our franchisees recognize and appreciate that.”

Karam believes Sbarro will bolster its pipeline enough to open 80 restaurants globally in 2021. He’s unsure if the brand has ever built at that pace—at least not since he’s been a part of it.

But the CEO is confident in the objective as long as Sbarro continues to execute against its brand position and dominate its niche.

“My intention is to develop the brand—move it to 1,000 plus units—but continue to be disciplined about focusing on what we call this impulse pizza occasion,” Karam says. “And in that segment, we don't want to sound arrogant or cocky, but in that segment, there's not even a close second to a brand that’s as effective in optimizing sales and profitability in those types of venues. So that’s the attack—continue to just heighten the execution against that vision, that positioning that we’re aimed at.”