The chain expects to sign 100 development agreements by the end of 2021.

Unit development hasn’t been Schlotzksy’s strong suit in the past couple of years.

In 2018, the chain opened a net of three units, but across 2019 and 2020, it shuttered 38, according to the brand’s FDD. Yet as the industry crawls out of the pandemic, Schlotzsky’s is prepared for a much different outlook this year with the signing of more than 75 deals in Midwest, Southeast, and Southwest markets like Georgia, the Carolinas, Ohio, Missouri, Kansas, New Mexico, and Oklahoma.

The brand believes it’s on pace to reach 100 deals by the end of 2021, and expects to open 25–30 units annually in the coming years. Chief Brand Officer Tory Bartlett says those agreements will come to fruition starting this year, with a couple of units opening in Ohio to close 2021. The rest will debut over 2022, 2023, 2024, and 2025. Schlotzksy's currently has 329 restaurant in 24 states.

The desire to grow is coming from multiple outlets. With more than a dozen consecutive periods of positive same-store sales, current operators expressed interest in building out markets. Meanwhile, franchisees from other chains under FOCUS Brands' umbrella (Jamba, Auntie Anne’s, Carvel, Moe’s Southwest Grill, Cinnabon, and McAlister’s Deli) and those linked to nontraditional locations, are eager to hop on board.

“[The deals] well exceeds historically what we've been doing,” Bartlett says. “We've been historically doing about 20 to 30 new deals a year that would come into a pipeline.”

The push for growth coincides with the release of two smaller “restaurant of the future” prototypes announced earlier in 2021. Design 1000 is a 1,000-square-foot double drive-thru unit, with no dining room and space for a curbside pickup window. Design 1800 comprises 1,800 square feet, with one drive-thru and 35 seats for dine-in guests. By shrinking size, Schlotzsky’s cut openings costs and improved the sales to investment ratio for franchisees, Bartlett explains. Additionally, the slimmer units help the brand find more real estate opportunities. Before the prototypes, Schlotzsky’s would search for more than an acre of land to build 3,000-plus square feet, but with the new editions, the company only requires 0.6–0.7 of an acre, and Bartlett says that’s in good supply.

Pre-COVID, dine-in accounted for 30 percent of sales. Almost a year and a half later, the mix inched up to 18 percent while digital sales doubled. Currently, drive-thrus are available at 85 percent of restaurants, but Bartlett expects that percentage to increase as "99 percent" of future stores will include the channel.

“Obviously 2020 we didn't really know what was going to happen, but we were prepared with some of the things that we did previously by working on shrinking our menu and reducing our SKUs, and focus on operational consistency and speed of service in the drive-thru. All those folks have really helped us not only survive through COVID, but actually thrive,” Bartlett says.

The Schlotzsky’s executive predicts a majority of new stores will feature one of the two prototypes, with 10–15 percent coming via second-generation locations. For instance, if the brand entered an end cap, the chain would only carve out 1,800 square feet to transform the space into its Design 1800 format. 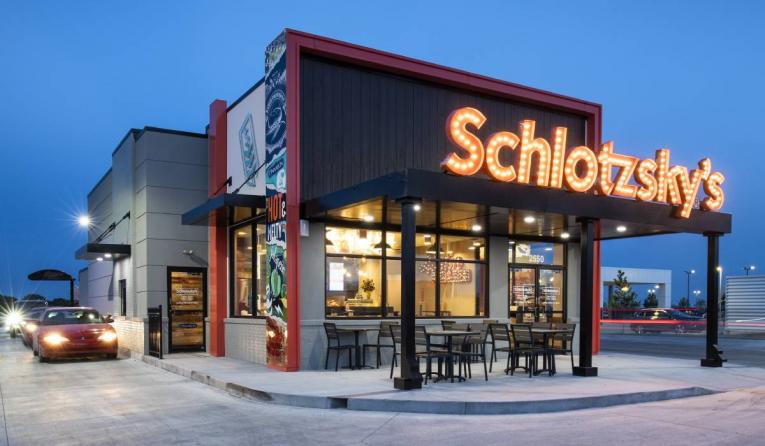 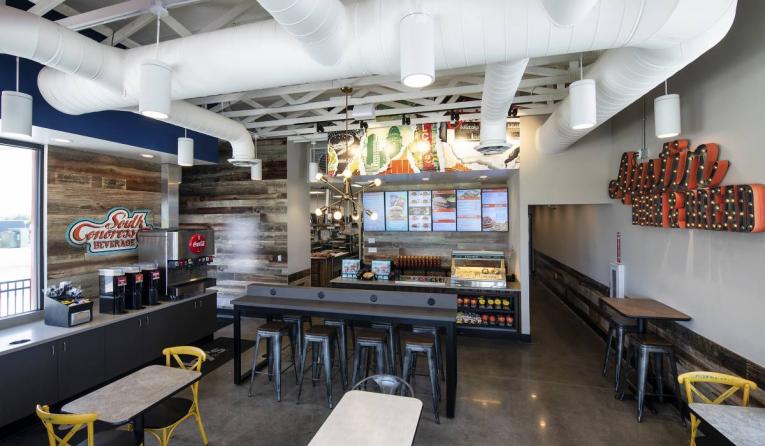 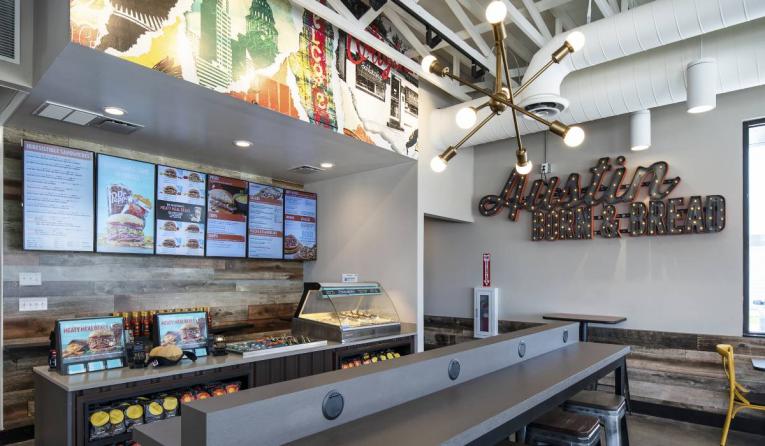 As Schlotzsky’s heads toward the end of 2021, Bartlett expects comps to remain positive in addition to more gains in traffic.

Veteran franchisee JJ Ramsey, who owns 20 Schlotzsky’s restaurants, opened the first Design 1800 unit in Derby, Kansas, on August 12, and debuted a second modified version this summer in Mountain Home, Arkansas. From a sales standpoint, Bartlett says the stores are accomplishing exactly what the brand projected—earning the same volume, if not more, compared to a larger legacy building.

“What we've seen immediately—and these locations have only been open for a short time—but we have seen that the way we designed to open it and operate it with less employees has proven out,” Bartlett says. “Once again, I think the bigger thing for me is that we've proven that the volume could still run through these smaller locations. The franchisee is extremely happy with not just the buildout costs of it, but how efficient the building is to operate.”

In terms of upcoming store debuts, Schlotzsky’s was forced to push some openings for a short period due to disruption with commodities and labor. The brand worked with franchisee partners to make sure they’re ordering equipment 12–16 weeks out instead of the typical four weeks.

Bartlett views staffing as the bigger question. Normally when the chain plans to open a restaurant, there’s an overwhelming number of applications, but now the brand is having to put more effort into drawing in candidates. One major fix is the prototypes, which require lower labor costs.

“We had some goals to reduce labor in these buildings and I think it's been two-for-one by reducing the menu offering, and secondly, redesigning the building and focusing on profitable channels,” Bartlett says. “One of our most profitable channels is the drive-thru versus dine-in business. When you have a dining room, you have to staff it, you have to heat it, you got to clean it, whatever. Our 3,300-square-foot prototype had 90 seats. Now we have 30–35 seats, so it's a lot smaller.”

“We are leaning heavy into speed through the drive-thru and accuracy so that guests know they can come to our drive-thru and be there fast and get the same quality food that they would on a dine-in experience,” he continues. “Those channels—just through digital and drive-thru—are extremely more profitable and easier on the labor model. By focusing on those channels, we've been able to deleverage that dine-in piece of the business, which is very labor intensive.”

As Schlotzsky’s heads toward the end of 2021, Bartlett expects comps to remain positive in addition to more gains in traffic.

He knows that headwinds with supply chain and staffing likely won’t dramatically change in that timeframe, but the brand is ready for that reality.

“I think what we do have to do is be prepared as we look forward to menu development and things that we want to do in ’22,” Bartlett says. “I think you've got to be very mindful that there potentially could be additional disruption in the supply chain network.”