Shake Shack is Getting Pricier as Inflation Pressures Heat Up

The brand expects a robust bounceback from omicron setbacks.

Shake Shack’s prices lifted 3.5 percent in late October—an industry theme that’s skipped very few restaurant chains of late. But this bump turned out to be a lull before a “wild consumer environment,” CEO Randy Garutti said Thursday. The fast casual will take another 3–3.5 percent of price in March, resulting in an inflation-based hike of 6–7 percent as the brand heads into Q2.

It’s also on the verge of raising third-party delivery figures from 10 to 15 percent higher than in-store. “We believe these current price rates are necessary to protect margins,” Garutti said on a conference call. “We'll be keeping a close eye toward the cost of our business, and we'll consider whether additional price may be necessary later this year.”

Rising case counts toward the end of December and throughout January resulted in a “swift reversal” of the brand’s Q4 trends, CFO Katie Fogertey said. Average weekly sales fell to $63,000 in January—from about $74,000 and flat to last year—and same-store sales slowed to 2 percent, year-over-year. Perhaps most vivid: the surge plus weather drove 87 full days of Shake Shack closures and a high single-digit reduction in operating hours. The brand also throttled digital channels in some cases.

“We want to be better at hiring great people that want to be with us, stay with us, and develop for the long term,” Garutti said, adding the company filled nearly 60 percent of operations leadership positions with internal candidates last year, 70 percent of those being people of color, and about half of those women.

READ MORE: How Shake Shack Learned to Meet Guests Where They Want

The omicron stretch differed from previous waves for one lead reason, though—Shake Shack has been here before. Fogertey said the pressures were “not new,” but rather consistent with what the system experienced in prior COVID flashes. While the timing of when this all eases is, as usual, uncertain, Shake Shack has already witnessed a tangible bounce back, just as it did with previous variants. Fiscal February month-to-date same-store sales are up about 13 percent as of February 15, Fogertey said. Barring further disruptions, Shake Shack expects comps to climb high single digits to low double digits in Q1, with sales of $190 million to $195 million.

“With omicron rates now plummeting, we'll point back to the fourth quarter as an indicator of the kind of momentum we know can occur as a more normalized consumer environment returns,” Garutti said. “No one quite knows the timing of how people will move about following this recent omicron wave, but we're bullish on what spring and our recovery can look like later this year.” 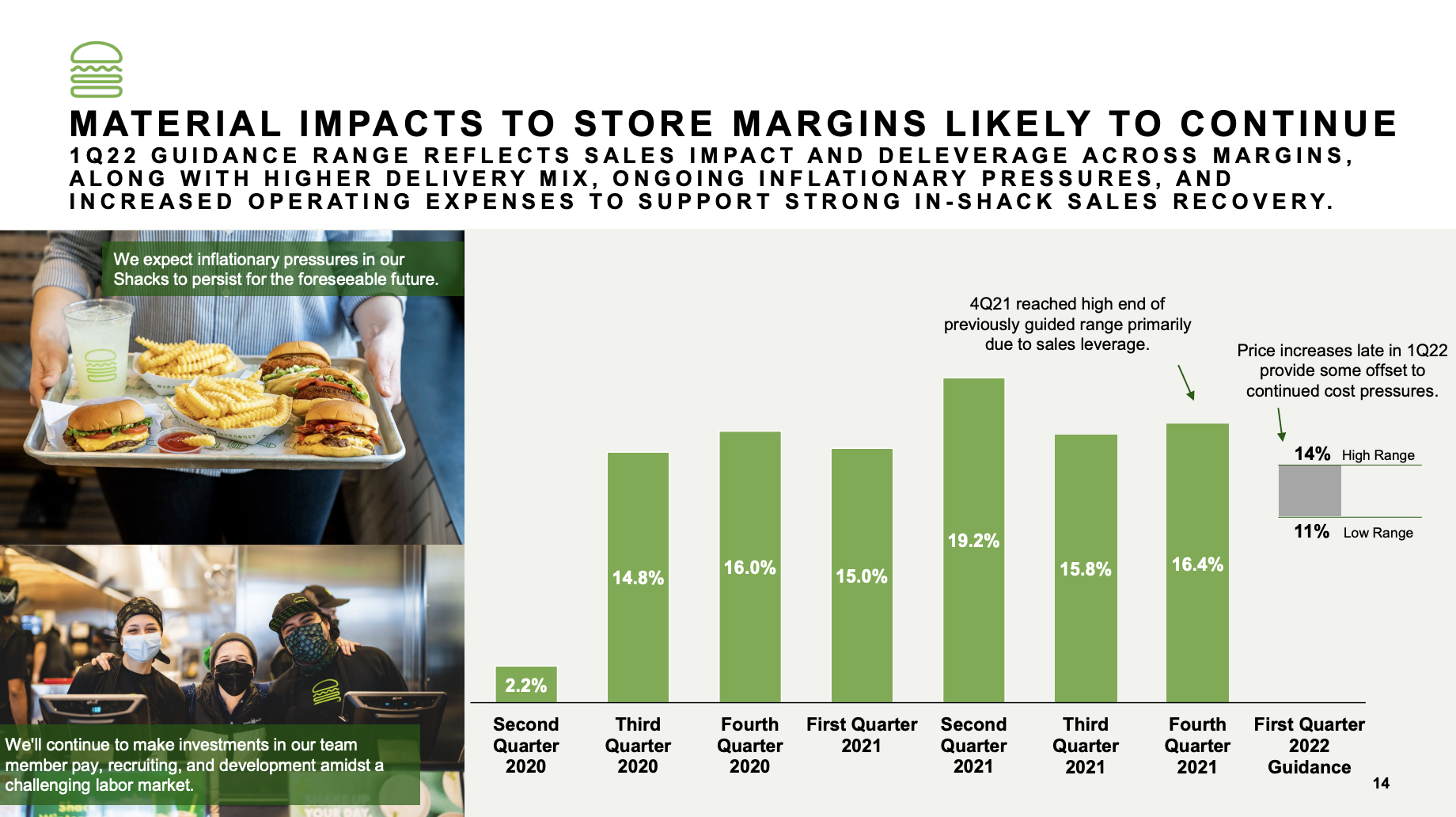 For Q4, total revenue increased 29 percent, year-over-year, to $203 million. Same-store sales hiked 20.8 percent (2.2 percent compared to 2019, which is an improvement from down 7.3 percent in Q3, and the first time the brand has been above pre-virus levels).

One of the reasons Shake Shack was able to recapture sales so quickly this wave was the company is well past the “pivot” era of its digital transformation. The company has added 3.5 million new app and web purchases since March 2020. In Q4, it grew its first-time web and app customer base by nearly 10 percent quarter-over-year and by more than 80 percent for the full year 2021. And Shake Shack continues to lean into more personalized and digital marketing, as well as key limited-time offers launched through its own-app channels, Fogertey said.

Come December, Shake Shack retained nearly 80 percent of the digital business it generated in January, even as in-store sales nearly doubled. Digital mix was 42 percent of sales in Q4 and nearly 60 percent when considering kiosks and the brand’s native digital channels combined. 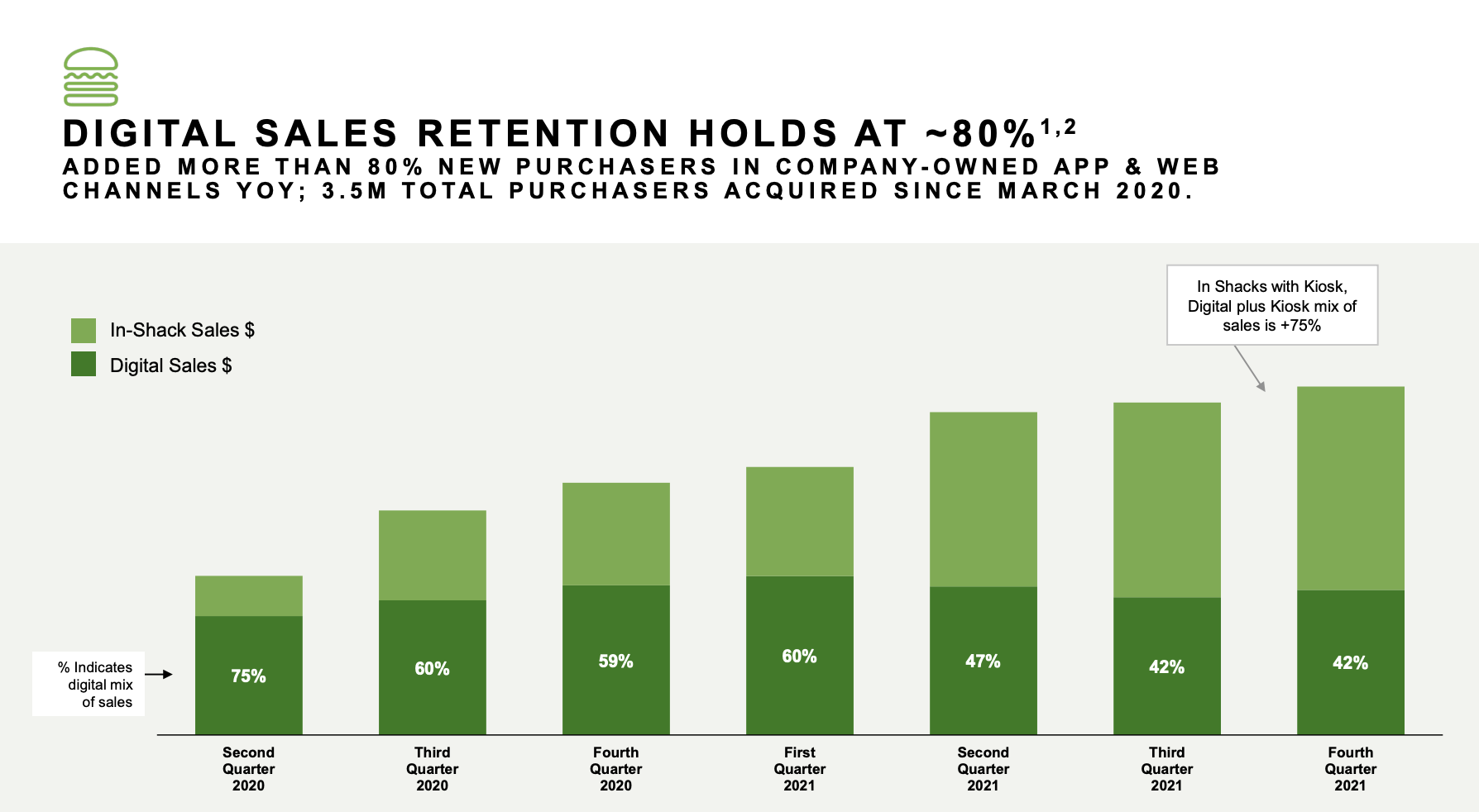 Shake Shack opened 36 domestic company-owned units in 2021 at an AUV of $3.9 million. It’s targeting 45–50 corporate stores in 2022 (heavily weighted to the back half of the year), which would give Shake Shack its largest company-run development year yet.

What’s notable, too, is how the development will materialize alongside digital growth. The class of 2022 will feature a large commitment to new formats like drive-thru, with 25 percent of the fleet featuring a Shake Track walk-up or drive-up window.

In December, Shake Shack opened its first two drive-thrus—in Maple Grove, Minnesota, and Lee’s Summit, Missouri. This past week, it brought another to market in Livonia, Michigan, outside Detroit. Upcoming drive-thrus are scheduled for Vineland Pointe in Orlando, and Castle Rock, Colorado.

Garutti said the current strategy is to open drive-thrus in heavy traffic locations so Shake Shack can learn under fire. A total of 10 should be operating before 2023 arrives.

“Unlocking this potential can have a tremendous impact on our long-term addressable market, and we're focused on deepening our investments, resources, and learning about this critical new addition to the Shack family of experiences,” he said.

Another access point gaining prevalence for Shake Shack are kiosks, which are live in about half of stores. In some units, the brand removed a cash register (it’s taken out more in others). “For us, it's more about the sales lift that we see on the back of it and the opportunity to drive deeper our digital strategy and really bring kiosk into that full digital ecosystem,” Fogertey said. “We see higher attach rates with our LTOs through this channel. We can see that guests really understand the menu items and really kind of engage with us in a really exciting way. And we're investing this year to increase the number of checks that have kiosk. … There's a lot of very exciting point-of-sale type technology that we're investing in today.”

But don’t expect to see robotics in a Shake Shack anytime soon. Efforts to automate processes, however, will continue, Garutti said. The brand is testing guest pickup screens that inform customers when their food is ready, for instance.

Growth isn’t going to come cheap in this climate. Shake Shack foresees build-out costs running 10–15 percent higher than historical levels in 2022 due to sustained inflation on material costs and labor. But the brand has roughly $400 million on its balance sheet, and “we’re going to use it to grow restaurants,” Garutti said.

BTIG analyst Peter Saleh wrote in a note Friday he was surprised by Shake Shack’s G&A guidance for 2022, which is expected to be $108 million to $114 million—well above BTIG’s initial estimate of $98 million. The G&A spend is about 30 percent growth relative to 2021 and up nearly 70 percent from 2019, though relatively similar as a percent of sales.

“While we recognize that the company is growing units by 20 percent this year, the investment is outsized versus our expectations that the company would have more significant G&A leverage. Management indicated that the higher level of spend was due to increases in marketing, technology and supporting the growth in new formats including drive-thrus."

To Garutti’s earlier point, there were plenty of green shoots from Q4 when you isolate the omicron surge from the first part of the quarter. The fact, even with behavior patterns not fully back in terms of international and domestic tourism, office, and dine-in overall, the chain’s Q4 same-store sales more than closed the gap to 2019. “This was a long-awaited milestone for the company,” she said. 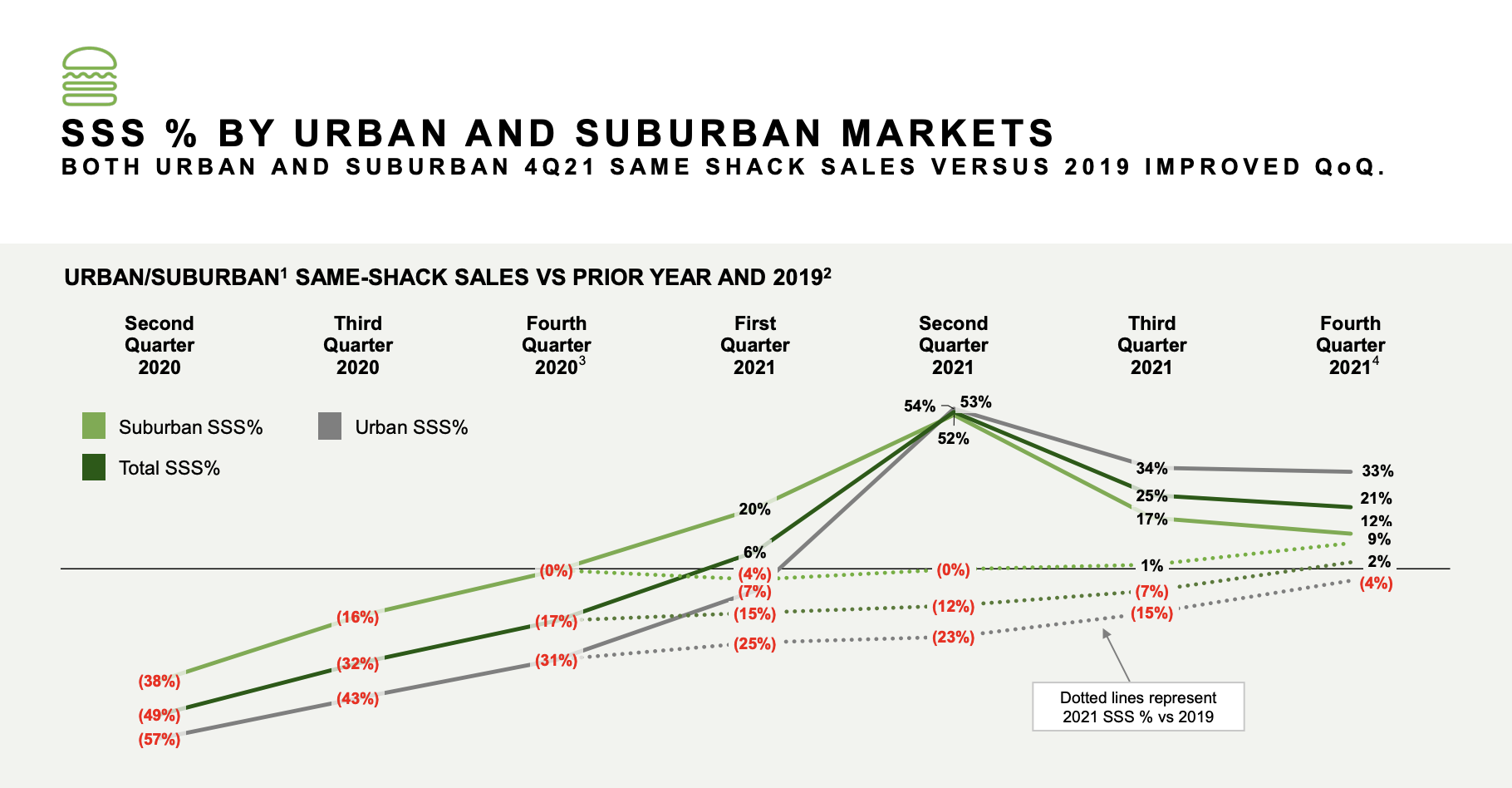 And it happened, Fogertey added, even as many of Shake Shack’s highest-volume stores remained depressed.

Urban same-store stores in the period were 4 percent below 2019 levels—a significant improvement from negative 15 percent in Q3. Most city centers outside of Manhattan were actually up relative to 2019, Fogertey said. NYC had the largest impact on the sequential improvement in total same-store sales. Suburban restaurants were 9 percent above 2019 levels.

Locations in Texas, Connecticut, and Georgia turned in comps 20 percent higher than two years ago.

Returning to pricing, Garutti said, Shake Shack has strong power despite the recent rises, but the company hopes the trend levels out. “I think we're probably on the conservative end of that if you look at us against the industry, us against at-home cost of food,” he said. “And I think that would tell you that we're probably in a pretty strong pricing position as we enter this next phase of things getting more expensive around us, which is why we'll keep an eye on things for the future.”