And that's taking on an even greater role during the pandemic.

There’s no secret as to why guests have flocked to Smoothie King amid the pandemic.

With COVID hanging over the U.S. like a dark cloud, customers have made health a priority, and that fits perfectly with the brand’s main objective.

As president Dan Harmon explains, Smoothie King’s mission is to inspire people to live a healthy and active lifestyle. The company’s vision is to become an integral part of everyone’s fitness journey.

In fact, the brand has spent the past few years “taking the bad stuff” out of its smoothies. For example, the brand launched a Clean Blends initiative, which is the brand’s commitment to blend a more nutritious product. At the crux of it, smoothies are mixed with whole fruits, organic vegetables, no syrups, no artificial flavoring, no preservatives, and no grams of sugar.

With Smoothie King serving as the wellness solution for many, systemwide sales jumped 14 percent in July year-over-year. At the brand’s more than 400 drive-thru units—where guests are ordering larger amounts—sales skyrocketed 26 percent.

“We're a natural fit with what's going on with the pandemic,” Harmon says. “People were looking for someplace healthy to go. … Which is why I think we've done well. And as we think about going into the future, I really think we're set up successfully, and that's one of the things that we've really been talking a lot about in our advertising—how we're talking about it in the stores and training our team members to really talk about that.”

Convenience is the other part of customers’ priority list, and Smoothie King checks that box, as well. The brand started rolling out digital initiatives in February, beginning with the launch of online ordering via its Healthy Rewards loyalty app and website.

In April, the company created a curbside program. The following month, it formed an exclusive partnership with DoorDash.

“… The drive-thru experience has also been really important for us … We're focused on speed, so we're working on getting guests through very quickly.” 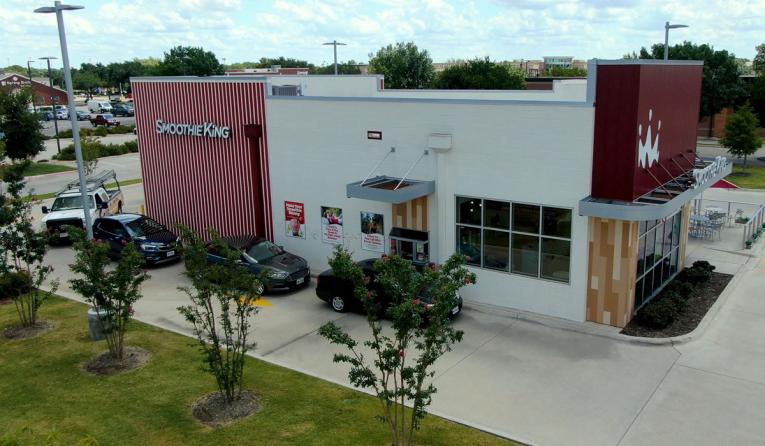 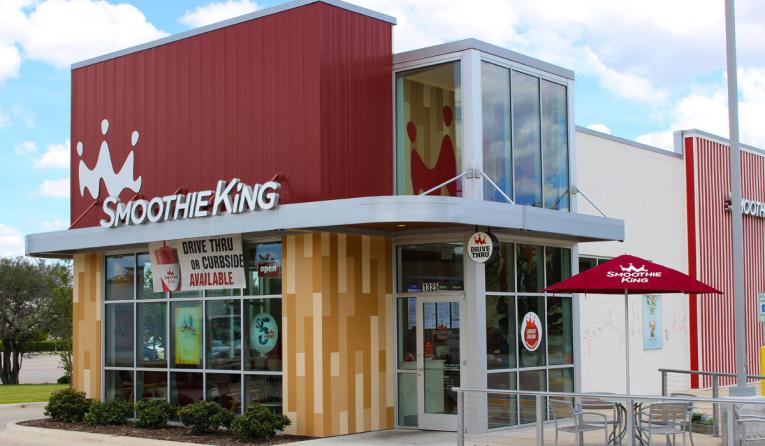 Drive thrus have played a critical role for Smoothie King during COVID-19.

As sales continue to grow, so does Smoothie King’s footprint. The company opened its 1,200 location in Royal Oak, Michigan, on August 18. In Q1 and Q2, a combined 26 stores opened; the expectation is to open 80 by the end of 2020.

In addition, Smoothie King has signed more than 35 franchise agreements, which will lead to the opening of more than 50 stores. A dozen new franchisees have joined the system this year and more than 25 existing owners have reinvested.

Harmon notes that development has been a little softer because of the pandemic. Even though it's not been a typical year for Smoothie King, the brand still feels good about how matters have progressed given the unprecedented circumstances. Stores openings have been strong this year and are above average for the system. In June, a new store in Greenwood, Indiana, set an opening-week sales record, garnering $45,759.

“I think one thing is we have a great group of franchisees, and so I think when you have a great group of franchisees, we attract other franchisees that want to be a part of this system. That’s first and foremost,” says Harmon, discussing what attracts investors to the brand. “I think it does tie back to our mission and vision, and people want to be a part of something that is healthy and being a part of the trends. And so I think that is something that's unique.”

“I think we have a unique offering,” he continues. “As we think about going back to the Clean Blends initiative and the work that we've done and the investments that we've made and how we're thinking about the business, I think franchisees—people that are going to invest in a brand—are looking for franchisors that are investing or looking towards the future. And I think that’s what they see in our brand. We’re looking ahead, and we're looking at what the future is. We’re thinking about healthy and active.”

When Harmon says Smoothie King is thinking about being healthy and active, he means it. Just before the pandemic reached the U.S., the brand launched Metabolism Boost smoothies—Strawberry Pineapple and Mango Ginger—to help customers boost metabolism and control appetite.

Smoothie King followed that up with a new Immune Builder Veggie Superfood Smoothie composed of non-GMO fruits and vegetables, including organic spinach, kale, carrots, bananas, and dates, along with an electrolyte blend and apple pineapple juice.

Then in late April, the company partnered with Under Armour to provide 10,000 Healthy Rewards loyalty members access to Under Armour’s MapMyRun MVP subscription to assist with workouts and tracking personal goals. Additionally, Smoothie King and its franchisees  donated $1 million worth of smoothies to local hospitals, testing centers, police and fire stations, and other essential workplaces.

That’s exactly why Harmon feels Smoothie King is currently positioned well among all the craziness. He expects that to remain the same for the rest of the year, if not better.

“We believe we can be as large as a McDonald's or a Starbucks—people want healthy,” Harmon says. “They want something that they can go to, and we think that’s who we are. And we're looking at the trends. We're looking at other brands that have done it well, and Smoothie King is that brand that's gonna be out there. it'll take us some time, but knowing the green space that is out there, the opportunity, and what guests are looking for, we believe that we can be as big as those other brands that are out there.”