Subway's Menu Gears Up for an ‘Innovation Renaissance’

Subway said hundreds of menu items have been developed and tested for possible future placement through the partnership.

Subway and Tastemade officially announced the expansion of their first-of-its-kind global food innovation partnership on April 2. The previous Friday, the world’s largest restaurant chain, with more than 44,000 restaurants in 110 countries, and the modern media brand that boasts an audience of over 250 million monthly active viewers, held a special event at Tastemade’s Studios in Santa Monica to talk about the extended alliance, which is now a multi-year agreement with plans to move beyond the U.S.

Built on a shared platform of insights and innovation, the two companies are actively collaborating to develop new menu items. And for a brand not historically known for vast menu innovation, this is a major deal for Subway.

Subway and Tastemade’s initial partnership was announced in August 2018. The goal: bring fresh takes to Subway’s menu, and also develop global and cultural connections to consumers. Use of a digital landscape and Tastemade’s hundreds of “tastemakers” all over the world allow Subway to reach and engage guests in new ways, and to glean insights on trends and locally relevant menus in real time. As a result, Subway said hundreds of menu items have been developed and tested for possible future placement. 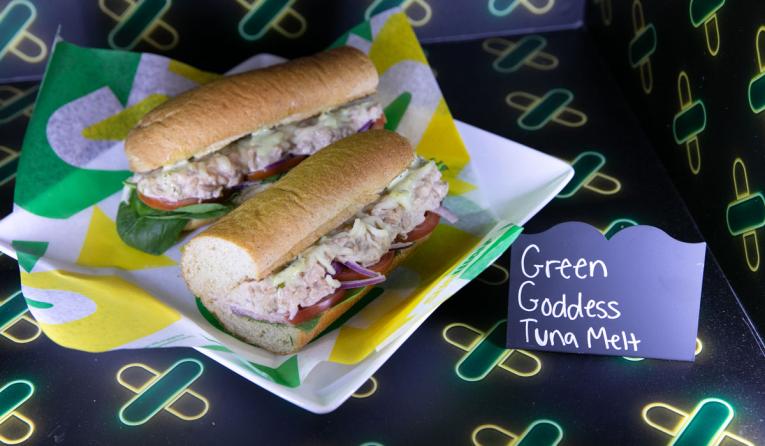 The Green Goddess Tuna Melt is an example of a first-to-market opportunity that could give Subway a leg up on competitors.

Having their fingers on the pulse of growing flavor trends, like green goddess dressing, and taking it to the next level is at the heart of the collaboration. “Take an American classic, a favorite, and give it a unique Subway twist,” says Len Van Popering, Subway's vice president of global brand and innovation. Tastemade saw the piqued interest and attention and took the idea to Subway, and the team went to work. The Green Goddess Tuna Melt is an example of a first-to-market opportunity that could give the brand a leg up on competitors. The LTO was successful with franchisees, Subway said. So much so that they asked to continue carrying the sandwich beyond April 24, when the offer ends.

The BLT&E, another “Inspired by Tastemade” product currently being tested, is also a nod to a decades-old American classic—the egg salad sandwich. Tastemakers noted their audience searching for deviled egg recipes, chatting about it, and sharing photos. Deviled eggs were gaining traction, so Tastemade, again, brought the data to Subway and the stream of creation began. The sandwich is made with deviled egg salad, Cheddar cheese, bacon, lettuce, and fresh tomato slices on Italian bread. Two additional “Inspired by Tastemade” sandwiches are the Carne Asada and the Southern French Dip, reflecting global and regional influences.

The partnership is just one of many significant changes Subway has rolled out over the past year. An optimization plan reduced the number of U.S. units by roughly 1,000 this past year, taking Subway below 25,000 restaurants in the country. The plan was driven by restaurant profitability, however, and turning around declining or flat sales and reduced traffic in certain legacy locations. As a result, the system was trimmed of some underperforming units, while other stores relocated or remodeled (or both). Hundreds of venues were remodeled with the Subway “Fresh Forward” and “Fresh Start” designs as well as FreshNow culinary updates, which include “Signature Flavor Stations” featuring new sauces and flavorings like the signature Sub Spice blend and the Subway Signature Herb Garlic Oil. There are also “Fresh Pour Beverage Stations,” with options like Watermelon Agua Fresca and Homestyle Lemonade.

READ MORE: Subway reflects on a year of “Fresh Forward”

Wanting to promote food not only as a taste experience, but also as a way for people to interact and connect with each other, is part of the Subway’s reenergized vision. Van Popering says no company can track this interaction quite like a media company can. “The scale of this partnership is expansive,” he says of the Tastemade deal. “It circles the globe. This makes us unique. It will dramatically ramp up the food innovation capabilities here and around the world.” 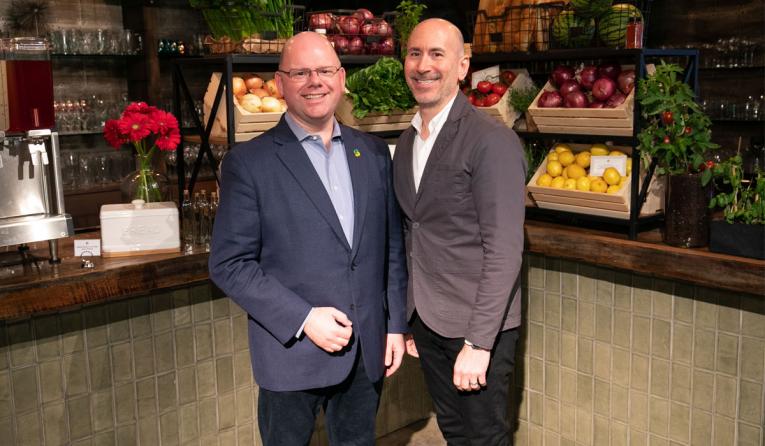 Len Van Popering and Jeff Imberman pose at Subway's Tastemade event. Van Popering says the partnership is “an innovation renaissance of the brand."

Calling the relationship with Tastemade, “an innovation renaissance of the brand,” Van Popering describes the new philosophy as a strategic shift from simply discounting sandwiches to offering compelling flavors available over a wide range of price points. “We’re really challenging the process with an open innovation mindset.”

True collaboration is an important part of that open mindset. The two companies engage in active dialog on a weekly basis with different milestones throughout the year. Both bring ideas to the table with the goal of ultimately taking them to market. Van Popering says this is not a typical vendor relationship, but an alliance. Subway doesn’t receive reports or commission studies.

“Think of us as a large global focus group of food enthusiasts that’s dove through the lens of social content, food driven content posted every day around the world, engaging and gaining insights,” says Jeffrey Imberman, of Tastemade. The alliance means real-time insights from the Tastemaker team. “If you’re not on top of that data with the audience, the consumer, you’re falling behind,” he says. This gives Subway the ability to move quickly, which Van Popering says is challenging with 25,000 U.S. locations. But it works because the entire organization is on board.

Real-time insights bring value to the partnership for Subway and Tastemade. They lead to menu innovation for Subway, while also feeding Tastemade’s search for more content and opportunities that come with picking up trends. In the end, it leads to engagement and larger audiences. “We’ve collectively come together and said we have unique needs and talents on both sides. We together created a brand-new line of business, a first to the industry and to both of us. Helping each other come up with better ideas. That’s pretty exciting,” Van Popering says.