Inspiring retention at the hourly, crew member level is like playing with house money for restaurants. The reality is most brands, especially quick-serves, will flip over entire staffs over the course of a year. It’s the cyclical nature of this business—the fact that 30 percent of the eating and drinking place workforce are part-time employees, compared to 18 percent of the total U.S. workforce. To illustrate further, according to the National Restaurant Association, the industry adds more than 500,000 jobs during an average summer season.

Unlike many fields, operators need to account for—and embrace—the notion that many people look to restaurants as an entry point into the workforce. Twenty-eight percent of restaurant/bar employees are enrolled in school versus just 10 percent of the total domestic labor force, per the U.S. Census Bureau. A third of all working U.S. teenagers are restaurant employees.

To put it simply, restaurants often employ people who just aren’t going to stick around for a full-year schedule.

So, where does that leave recruitment and retention efforts, especially amid a labor pool that’s reporting the lowest jobless rates since 1969? Brands are seeking competitive differentiation in more stable places, like general managers.

Taco Bell, from a corporate store perspective, reports turnover at the position of roughly 35–40 percent. But what it’s found, says Ferril Onyett, the chain’s senior director of global training and international HR, is that when GMs stick around five years, they typically commit long-term.

And so finding ways to reach that benchmark is a tier-one goal for Taco Bell in 2020 and beyond.

On Thursday, the company announced a bold initiative it plans to test later in the year at select corporate units (about 450 of Taco Bell’s 7,191 locations are company-run). It will pilot $100,000 annual salaries for GMs at restaurants. Onyett says Taco Bell hasn’t picked the exact locations yet, but is looking at stores that average $2 million or so. In 2018, the chain reported AUVs of $1.6 million across its U.S. system.

Needless to say, $100,000 is a significant bump from current levels. “The idea behind this is we have up to 50 team members that those restaurant leaders are inspiring and developing and creating that next generation of leader,” Onyett says. “And, obviously, a $2 million business is a really big business. I think people don’t understand how hard it is to run a $2 million business that is seven days a week, 20 hours a day, with 50 team members and creating an exceptional customer experience.”

READ MORE: Here's a look at a variable-pay program Taco Bell tried in the 1990s.

The battle for talent across quick services factors into it as well. “We are really just looking at how do we differentiate ourselves as an employer,” Onyett says. “And how do we really emphasize the importance of restaurant management as a career?” 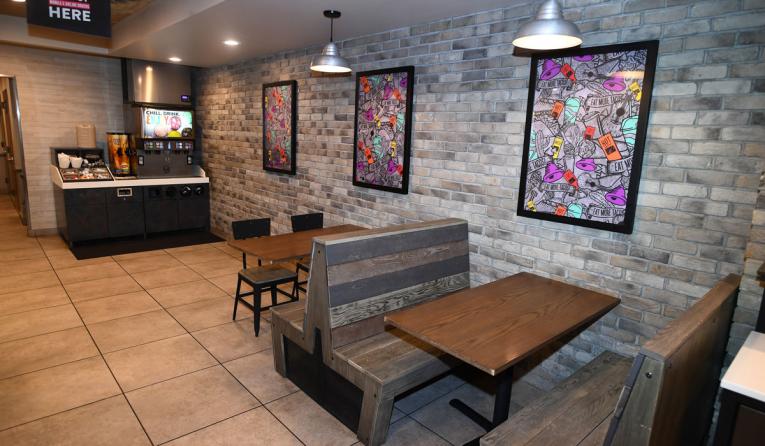 While $100,000 salaries might seem like a massive cost burden for Taco Bell to shoulder, restaurants are finding in today’s tight labor market that an investment upfront is worth its weight in bottom-line gold. The reason being that turnover down the road tends to cost more than retention efforts now.

Store wide, the Association estimates turnover runs $2,000 per employee. Let’s use full-service giant Olive Garden as a hypothetical (here's a look at how Darden is winning the war for talent). If it takes 100 people to staff one (it’s 60–120 hourly employees typically) and you go by a common 120 percent turnover figure, that’s $240,000 per restaurant, or $208 million across the 867-unit chain. It's far from an exact science—not close really given the part-time considerations, etc., and Olive Garden is not at the top end of the metric—but it offers a glimpse into how big of a deal this is for restaurants.

And the issue looms even larger at the GM level. Black Box Intelligence pegs the cost of replacing a single restaurant GM at about $14,000. What’s interesting, too, especially considering Taco Bell’s goal, is how GM salaries have moved—or staggered—in the past 10 years. Black Box studied GM pay at 10-year intervals for the last few years. What it found was that restaurant GMs are receiving less compensation today than they earned 10 years ago, once pay is adjusted for inflation. Taking that latter point into consideration, base salary for GMs in limited-service brands was 6 percent lower on average in 2018 than in 2008.

So, to Onyett’s hope, there’s little debate that offering $100,000 salaries to GMs at Taco Bell would be a hefty recruitment tool. And it would almost surely inspire current managers to lock into the brand for a while.

Beyond just offering more money, though, Taco Bell plans to include free financial planning (subsidized by Taco Bell corporate) for these GMs.

Yum! has an organizational tagline, “GMs No. 1,” that Onyett says reflects why they’re the most important leaders in the system. Having well-established and satisfied GMs trickles down throughout the entire company, she says. Entry-level team members see the opportunities GMs are afforded and that reinforces their desire to stay and climb the corporate ladder.

On that note, Taco Bell is introducing a “Makers” program this year for team members who want to “elevate their passion for the brand and want leadership experience.” Additionally, in a move that went into effect January 1, Taco Bell started offering all company employees the ability to receive 24 hours of paid sick time per calendar year. Previously, this was available only to manager-level workers. 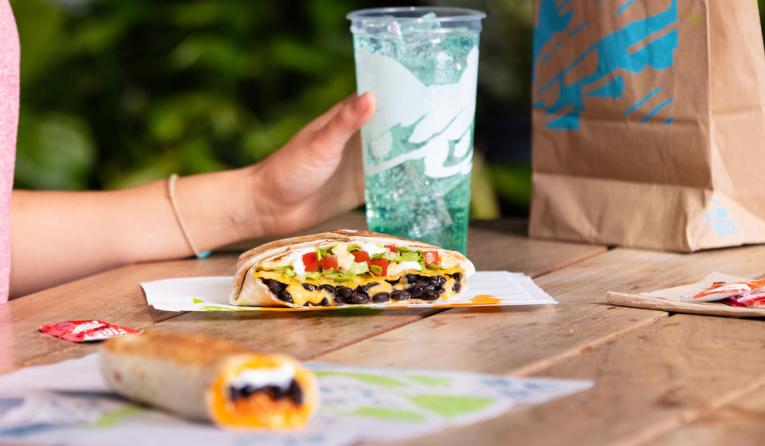 However, once again talking from the top down, Taco Bell has more plans to keep its GMs from churning. In February, the company expects to launch a new four-day workshop for GMs who have been onboard between five and 10 years to “help them continue to further develop their leadership skills and reengage them and reignite their passion for the brand,” Onyett says.

Concerning the $100,000 pay test specifically, she says, Taco Bell wants to see if restaurant performance continues to grow. Will it inspire units to soar beyond that $2 million mark? Also, will the stores witness a reduction in team member turnover? Will customer experience metrics improve? Will restaurant performance, everything from accuracy to speed?

Lastly, Onyett says Taco Bell plans to keep a close eye on the GMs themselves to see if this new financial bar keeps higher-level employees around.

As far as how this affects franchisees, Onyett says, if positive results flood in, she expects operators to follow corporate’s lead. That’s typically how initiatives have worked in the past.

“What we find with them is they usually look to us as the model of what is really helping to improve the employee experience and the restaurant and customer experience,” she says.

“Part of it is that data,” she says, explaining why Taco Bell came up with the recent initiatives, “and part of that is just looking at our succession plans in the field with our restaurants. And then part of it also is, quite frankly, just how do we really set ourselves apart from everybody else so that we can continue to attract and retain the best and brightest. Whether that’s a team members or shift lead or general manager?”

The $100,000 figure and paid sick time news wasn’t the only announcement Taco Bell made Thursday. The company also said it plans to increase education support for customers and employees (both of which can apply). Its Taco Bell Foundation expects to award $6 million in Live Más Scholarships this year. That will bring the organization to $17 million in total awarded scholarships since it launched five years ago, well on schedule to reach an initial commitment of $21 million by 2021. Taco Bell is accepting nominations until January 23.

The brand has deep roots in education assistance. Last March, Taco Bell announced it was extending its Guild Education pilot to all 210,000 employees in its system of 7,000-plus U.S. restaurants. Previously, Taco Bell piloted the program in about 700 company-run restaurants, a pool of more than 2,000 employees. Taco Bell saw a 30 percent increase in employee retention for those enrolled over the first six months. Employees enrolled in a course, program or degree through Guild had a 98 percent retention rate in that same space—a 34 percent increase over those employees who were not enrolled.

"I think that’s our challenge. How do we continue to tell the stories to retain those employees and help them grow with the business?” — Ferril Onyett, Taco Bell's the chain’s senior director of global training and international HR

Oneytt says Taco Bell recently extended its agreement with Guild for another three years and is working on a management certification course, among other changes.

Taco Bell promotes a robust benefits program for employees at corporate-owned stores, too. Shift managers and above, as well as team members on one of Taco Bell’s medical plans, have year-round access to board certified physicians who can prescribe prescriptions via phone consultations through the Teladoc program. For all corporate units, there’s $5,000 in company paid basic term life insurance for team members. Yum! also offers a 401K plan with company-matching contributions, dollar for dollar up to 6 percent. Other benefits include: $10,000 in company-paid basic term life insurance for shift managers (amount increases with level); vacation of 1 to 4 weeks based on job title; and a free tobacco cessation program through KickButs.

At the end of the day, however, Onyett says one of the most important elements is simply getting this message out—that restaurants are indeed great places not just to start careers, but to grow in.

“I think, our challenge is how do we continue to tell those stories of the success? Because the quick-service industry is not necessarily always seen as a great career,” she says. “But we have so many examples of where it has been and people being able to improve their lives. So I think that’s our challenge. How do we continue to tell the stories to retain those employees and help them grow with the business?” 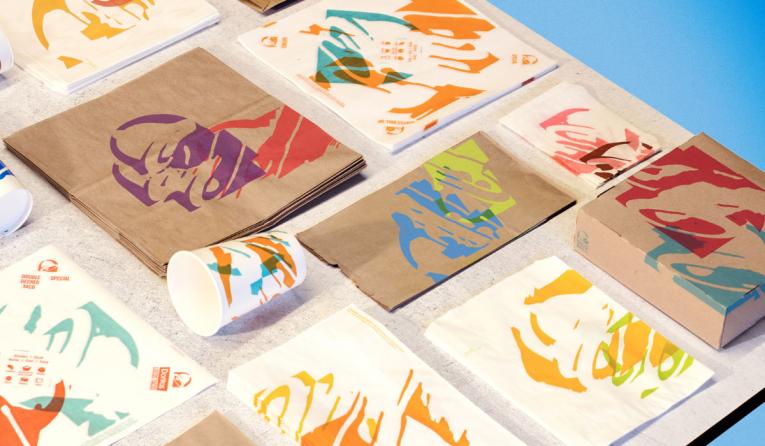 Taco Bell is committing to convert all consumer-facing packaging worldwide to be recyclable, compostable or reusable by 2025.

Sustainability in 2020 gets a spotlight

Missy Schaaphok RDN, Taco Bell’s manager of global nutrition and sustainability, says the brand has the chance to make a sizable impact through its efforts. “In the U.S., we serve over 36 million customers each week,” she says. “With that much reach, we have the opportunity and responsibility to make a positive environmental impact, and we recognize consumers’ growing sustainability concerns, including plastics use and recycling practices. So, we’re making these commitments to invest in what matters to our fans, so they don’t have to choose between craveability and responsible dining.”

“We wanted to make commitments that were all-encompassing and that really push the envelope within the [quick-service restaurant] industry,” Schaaphok adds. “Some of our existing packaging is already recyclable, such as our cold beverage cups and our fiber-based $5 boxes; but the new changes will impact everything handled by our customers, such as our taco wrappers and holsters. To achieve these goals, we’re collaborating with suppliers, franchisees, industry partners, and local markets around the globe to test eco-friendly packaging, remove unnecessary chemicals and meet local regulations.”

Taco Bell added that it wants to further reinforce its vegetarian positioning this year. In 2019, the company launched a national dedicated vegetarian menu with American Vegetarian Association certified items like the Black Bean Crunchwrap. The company said it will spend 2020 making it easier to order them, whether that’s at the pp, in restaurant or at the drive thru, and continue to pulse more options into the mix.